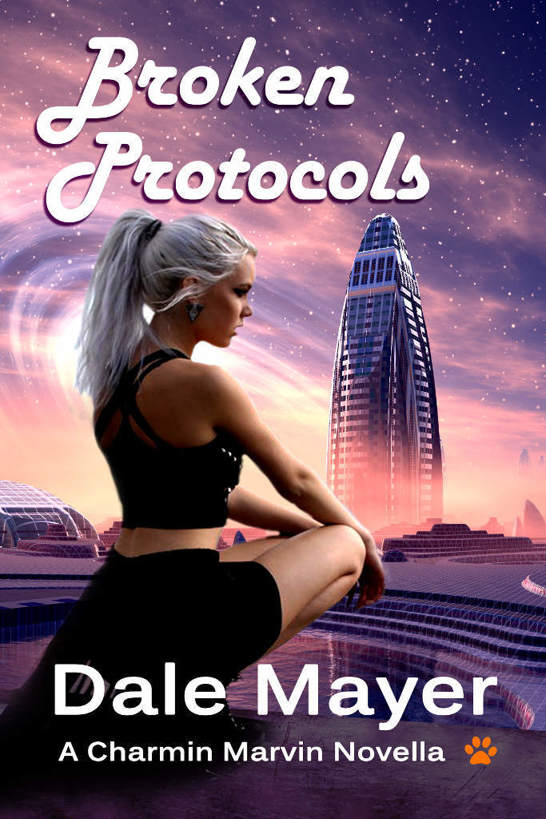 Dani’s been through a year of hell…

Just as it’s getting better, she’s tossed forward through time with her orange Persian cat, Charmin Marvin, clutched in her arms. They’re dropped into a few centuries into the future. There’s nothing she can do to stop it, and it’s impossible to go back.

And then it gets worse…

A year of government regulation is easing, and Levi Blackburn is feeling back in control. If he can keep his reckless brother in check, everything will be perfect. But while he’s been protecting Milo from the government, Milo’s been busy working on a present for him…

The present is Dani, only she comes with a snarky cat who suddenly starts talking…and doesn’t know when to shut up.

In an age where breaking protocols have severe consequences, things go wrong, putting them all in danger…

Books in This Series:

This is a work of fiction. Names, characters, places, brands, media, and incidences either are the product of the author’s imagination or are used fictitiously, and any resemblance to actual persons, living or dead, business establishments, events or locales is entirely coincidental.

I love to read Dale Mayer’s books… keeps me guessing…. I am getting good though trying to figure out who did it…. I am on my fourth book….

Dale Mayer’s work is always outstanding and Haunted by Death is no exception.

…Review from Haunted by Death, book 2 of the By Death Series

This is a GREAT series that you don’t want to miss out on!

…Review from Dangerous Designs, book 1 of the Design Series

Dale Mayer is a gifted writer who now has me hooked as a new fan. She characters are complex and she shares her knowledge of energy work clearly and simply. Makes for fascinating reading…

Wow! I read a lot, and I can honestly say that there a few books that I have read that I will remember for years. This is one of those books. Thank you Dale for giving me the gift of this magnificent story. It was both heartbreaking and hopeful at the same time.

…Review left on Skin, book 1 of Broken and yet…Healing Series

Touched by Death is an outstanding novel by Dale Mayer. Unlike her usual novels that contain paranormal activity, this novel is sheer malevolent actions from ordinary humans.

…Review left on Touched by Death, book 1 of By Death Series

Dale’s books are spellbinding in more ways than one. She has a unique way with words. Her characters are fun and funny and loving. I love the way the story flows. Her characters all have personality. She takes you from suspense to love, then fear love and eternal love.

Protocol 1:3:1 – You will in no way use technology to damage the life of another – particularly if those actions are to selfishly enhance your own.

D
ani Summerland was
on top of the world. It had taken several years, but she’d finally put her past behind her. A new day had begun. A new job, her first date in a long, okay…in a very long time and for once, her future looked bright.

It had been a hell of a year.

She glanced at her watch and realized she was running a little behind after working late. She walked faster on the busy street. Rush hour had peaked, but there were plenty of people racing still to get home. Her apartment was just around the block. For the umpteenth time, she pulled the faded, crumpled photo of her and Lawrence from her pocket. He’d been everything to her. Now, a year after her very public humiliation, she could finally say she’d recovered. It was time to get rid of the picture. She’d hung onto it as a reminder. Of a lesson learned to never be forgotten. Some rules were never meant to be broken – and ignorance was not an excuse. She’d had some inkling that things with Lawrence weren’t as they’d seemed, but young love and all the rest of those glorious emotions guaranteed to get her into hot water had overruled her better judgment.

So she’d ignored those little nudges. Until she found him at a company event, the host, in fact – with his wife at his side.

That had been the most disastrous evening of her life. The wife’s mocking look and laughing comment to her in the ladies’ room later about being her husband’s latest side piece hadn’t helped. The pink slip from his legal firm the next day was just another insult and another piece of her education.

Never have an affair with the boss – especially when it turns out he’s married.

She’d been such a fool. She hated that the other staff had known – and no one had said anything to her. That they all believed she was the kind to have affairs with married men. Now she got the snide comments she hadn’t understood. The mocking and disgusted looks she hadn’t connected to the truth.

There was nothing like learning about men – life – consequences – the hard way.

There was a garbage can up ahead. She stopped, carefully ripped up the picture – one that she’d once loved and held dear – into tiny pieces, and fed them to the can.

Then she turned, pulled up her coat collar, and walked faster.

It was time to let go and create a better future. And as of today, it looked damn bright.

“What the hell?”
Levi studied the massive wall of monitors in front of him. They should be locked behind the security field at this point. He glanced around the large empty office to see if anyone had slipped in behind him, but he was alone in the encroaching darkness. Then again, he should be. It was damn late, and it was his brother’s office. No one was allowed in but the two of them. Not in this age of computer espionage. His world lived on computers, and his brother was a genius when it came to programming. There was nothing he couldn’t build.

Hence the large company that they owned, with a few family backers, and the heavy security measures they used to keep their inventions secure until the official release.

If it weren’t for Milo’s recent odd behavior, that little kid look of having a secret he desperately wanted to share, Levi wouldn’t be here now. Genius Milo – chocolate-munching, green Mohawk-ed, geeky Milo had been acting suspicious for days.

That would give anyone nightmares.

As his partner and older brother, Levi didn’t dare let Milo go off half-cocked again. Genius he might be, but he was lacking a certain level of common sense, as proven by their being slapped by the CCDA Regulatory Commission last year. No one doubted Milo’s intentions – it was just that they weren’t clearly thought out. At the end of the nerve-wracking review, the board had determined that the brothers would be allowed to continue their IT company, but the genius needed to be carefully watched.

A year later, the regulatory overseeing eye had eased – slightly. But the scrutiny had chafed for both Milo and Levi. For Milo more so.

And as Levi stared at the complex coding on the screen mounted in the center of the wall, he realized that Milo was in deeper than before. Levi’s heart sank. This last year had done nothing to smarten Milo up. This program looked to be almost complete, if not ready for testing.

“I wondered how long it would take you to check up on me.” Milo’s quiet voice spoke from behind him.

Levi dropped his head into his hands, wanting to pull his hair out. Instead, he said in low worried voice, “What have you done?”

“Kind of awesome?” Levi spun around to glare at Milo. “This could mean jail time, you know that.” He towered over his younger brother. “This could mean losing the company. Years of our time and effort. Years where the family helped us, backed us, protected us. Did you even think of that?”

“No. No, it doesn’t.” Milo rushed over, wringing his hands. At least the childish delight of the last few days had dimmed. Milo just didn’t get that rules and regulations were there for a reason. Levi did. He lived by them. His brother didn’t even acknowledge them. And Levi had been bailing him out since he was a little boy – he wasn’t going to change now.

Milo loved history. And when he added his crazy geek skills and a complete lack of comprehension of the limits to what he could do, all manner of hell could happen. Had happened. Was possibly about to happen again.

“You don’t understand.” Milo beamed with excitement. “See, it works this time.”

“Yes.” Milo hopped from one foot to the other. Passion and joy was on his face and in his voice. “It does. It does. Honest.”

Backstabbing in Beaujolais (Winemaker Detective Book 9) by Jean-Pierre Alaux, Noël Balen
Ripped Apart: Quantum Twins – Adventures On Two Worlds by Geoffrey Arnold
Memories of Us by Linda Winfree
Chosen by Kristen Day
Cheated by Patrick Jones
Out of the Blue by Sarah Ellis
The White Queen by Philippa Gregory
The Road to Nevermore by Christopher Lincoln
The Accidental Fiancée by Zeenat Mahal
Margaritas & Murder by Jessica Fletcher