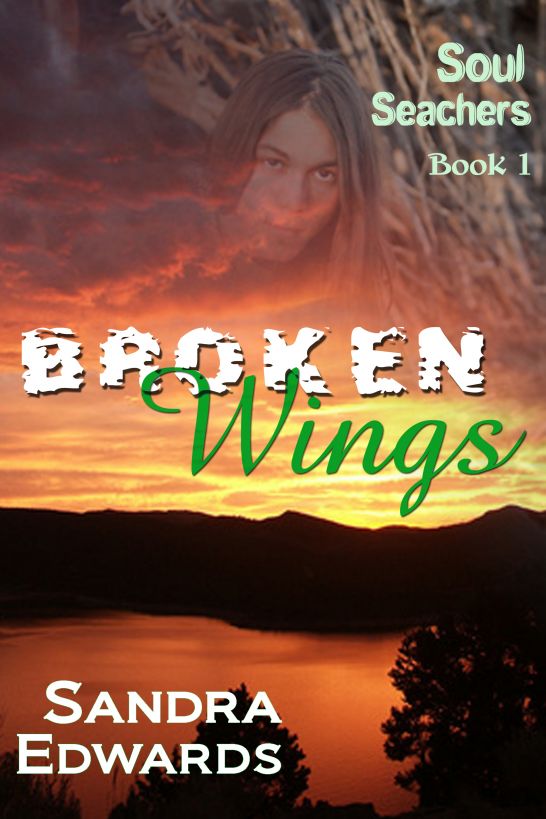 Discover other titles by Sandra Edwards
at Smashwords.com

ALL RIGHTS RESERVED. This ebook is
licensed for your personal enjoyment only. This ebook may not be
re-sold or given away to other people. If you would like to share
this book with another person, please purchase an additional copy
for each person you share it with. If you’re reading this book and
did not purchase it, or it was not purchased for your use only,
then you should return to Smashwords.com and purchase your own
copy. Thank you for respecting the hard work of this
author.

This book is a work of fiction and all
characters exist solely in the author's imagination. Any
resemblance to persons, living or dead, is purely coincidental. Any
references to places, events or locales are used in a fictitious
manner.

Book One in the Soul Searchers
Series

The characters in Broken Wings have
lived inside my head for many years, but it wasn’t until I moved to
northern Nevada that I began to see hope for their fruition. Had it
not been for my husband Bill and all those time-consuming trips up
into the hills surrounding the areas of Virginia City, Carson City
and Lake Tahoe, Nevada—those characters might never have seen the
light of day. Because of those excursions, I was inspired to bring
to life the story that’d been stewing in my brain since
college.

In Nevada I was able to wrap the seeds
of my story around the state’s rich history and the Washoe Indians.
I was determined to stay as true to the Washoe culture, as much as
I possibly could, and in doing so I was able to mold and create an
even more compelling storyline. Until finally, the endearing love
story of Maggie and Tajan (pronounced Tay-hawn) found its way from
my head (and my heart) and onto the pages of this book.

I do hope you’ll enjoy the tale I’ve
created in Broken Wings. If you’re so inclined, I’d love to hear
your thoughts on it. Please feel free to contact me
[email protected]

It’s a well-known fact that in 1859 two
men discovered gold at the head of Six Mile Canyon in the vicinity
of Virginia City, Nevada. Today, we know this great historical find
as the Comstock Lode. It’s interesting how the strike ended up with
that name since neither of the miners bore the name
Comstock.

As the story goes, a man named Henry
Comstock stumbled upon the miners and said, “This land belongs to
me.”

History paints Mr. Comstock as a
colorful character who had a knack for twisting the truth for his
convenience. Sure, he’d owned the land at one time, but had long
since sold it. And some say, many times over. Nevertheless, the two
miners believed Henry, so much so in fact, that they named the
strike after him and cut him in on the proceeds.

As it turned out, the Comstock’s gold
was hard mining, mostly because it had this sticky gooey stuff all
over it. Even so, it didn’t take assayers long to confirm the gold
was wrapped in silver.

During the 1860s, over three hundred
million dollars in gold and silver was quarried out of Virginia
City. It only stands to reason that there must have been some
thievery going on. There are many tales about robberies and
roadside ambushes during Virginia City’s heyday.

This story is one of them. A story
about a treasure that was stolen and buried somewhere in northern
Nevada where it has remained hidden for more than one hundred
years.

The gang of thieves was comprised of
three sisters from California: Maggie, Mary and Molly Fuller.
Maggie, the eldest, had strong ties to the Washoe
Indians.

Over the years, grand stories have
taken shape about her. One of the most intriguing is that Maggie
would return one day to reclaim the treasure. Believers have argued
that she’ll retrieve it and turn it over to the tribe as a means of
restitution for all their ancestors had suffered as a direct result
of the Americanization of the West.

Turner Atkins was up to no-good. The
stars had finally aligned for him and now all he had to do was grab
them.

He’d happened upon the perfect scam
years ago, but until recently he’d thought it was forever out of
his reach. It mattered little that the scheme was brilliant, not to
mention illegal; Turner needed help pulling it off. And not just
anybody’s help. That’s where Rio Laraquette came into the
picture.

He’d heard all about this little
hotshot. She’d been running cons around town the last few
weeks—cons that he’d played as a child. She’d gotten quite the rep
from what he was hearing. And Turner had every intention of
shutting her down—until he got a good look at her. There was
something oddly familiar about her. It’d taken a little time to
figure it out, but once he had he decided to give this tough little
cookie a reprieve.

He’d summoned her to the back office of
one of his many warehouses. She was a looker. A pretty redhead. But
she was too feisty to suit Turner. Inside of a week, he’d probably
want to kill her more than he’d want to screw her.

She was sitting across from him in one
of the two chairs in front of his desk. She had her arm draped over
the back of the empty chair. Looking like she owned the place, she
gave him a blank stare. If she was feeling any doubt or fear, he
couldn’t see it. That surprised Turner since most people were
naturally afraid of him. With good reason.

He hadn’t gotten his ruthless
reputation by being a pushover. He’d risen to power early in his
career and quickly gained a name for being the most brutal gangster
Vegas had seen in over fifty years.

“
So…” Rio’s voice dragged
Turner back to the here and now. “What exactly is it that you want
with me?” she asked, cool as a cucumber.

He found her unruffled demeanor
amusing. “I have a job for you,” he said. “One that’s going to pay
you a whole lot more than those two-bit con jobs you got going on
all over town.”

“
I’m listening.” She gave
him a little waving gesture with the one hand that was hanging off
the back of the empty chair beside her. Anybody but Turner would
have missed the necessity in her tone. She wanted to get straight
to it and she didn’t like waiting.

Tough. She’d have to know the history
to get the job. “When I was a little kid we used to visit my
grandmother a lot. I can remember hearing stories about buried
treasures in the hills between Carson and Virginia
City.”

Oh, those glorious stories. When Turner
was a kid, he loved listening to his grandmother spin her tales.
She made it sound so fascinating. After a lazy afternoon of
listening to her weave her yarns of mystery, robbery and
romance…Turner would spend the next few days with his head in the
clouds, dreaming about growing up and becoming a treasure
hunter.

“
And your family history has
what to do with anything?” Rio asked.

Turner ignored her snarky attitude. He
had to. Without her this thing would never work. “Ever since the
first time I heard her tell one of her stories,” he said as if he
hadn’t heard her rant, “my whole life…all I ever wanted was to find
me one of them treasures.” He paused, as if deep in thought. “I
never put much stock in actually finding one, though. Not until a
few years ago when I met this woman named Audrey Tajan. She told me
this fascinating story about an Indian warrior called Tajan and a
beautiful white woman named Maggie Fuller. They were her
great-great grandparents,” he said. “It seems that Audrey’s
great-great grandma and her sisters had a keenness for robbing
banks,” he announced with pride. “During the height of Virginia
City’s glory, they went up there and stole a bunch of gold and
silver.”

Rio fidgeted in her seat. Frustration
tended to do that to her. It bothered her that she had worked so
hard and for so long, trying to create the best opportunity to
build a connection with Turner Atkins. And now that she’d finally
done that, hearing folklore tales was what she was left
with.

Turner seemed oblivious to her
impatience. “They buried it up there somewhere,” he continued on as
if she shared his enthusiasm for the story. “But they never got the
chance to go back and get it.”

Well now
, Rio thought,
we’re
finally getting down to the heart of the matter
. Granted, this
wasn’t exactly what she had in mind, but she’d take what she could
to get on his good side.

Rio Laraquette, treasure hunter
extraordinaire. She had to admit, it did have a certain kind of
charm about it, although she’d never let Turner know. She had to
let him keep thinking she was the dumb redhead he’d pegged her for.
“I suppose there’s a point hidden in your story
somewhere?”

He had to wonder how she’d ever managed
to pull off a single con. But it was much too late to start having
doubts about her now. Rio was irreplaceable. And since that was the
case, it was time to spell it out clearly and see how far this
little firecracker was willing to go for a buck. “My point,” he
said, “is that Audrey told me her brother has half a map. It’s
supposed to lead to the sisters’ treasure.”

“
I want you to go up to
Carson City and tell those Indians that you’re Audrey Tajan’s
daughter.” He cleared his throat. “And then...I want you to talk
them into going out and finding that treasure.”

“
You’re kidding, right?” She
laughed at the ridiculousness of his scheme. Hadn’t he noticed her
skin was whiter than white? And she was a redhead. Who was going to
believe she had Native American blood running through her veins?
“What about Audrey?” she reminded him. “She can put that notion to
rest.”

Turner shook his head. “Audrey’s not
going to tell them anything.”

“
And you know this…because?”
Rio asked.

“
So let me get this
straight. You want me to get them to go out and look for a
treasure.” She brought her arms around in front of her and clamped
her hands together in her lap. “With half a map?”

Turner opened his desk drawer and
pulled out a faded and worn document. “This is the other half of
the map.” He pushed it across the desk.

Rio studied it. Could this thing be
real? She looked back at Turner. “So what do you need me for?” She
laid the map back down on the desk. “Why don’t you go to them and
say…
Hey, I’ve got the other half of the map. Let’s go find the
treasure
?”

Turner’s expression turned dark.
“Because I don’t want to share it.”

It was like someone had turned on the
lights and Rio realized it was Christmas morning. “You’re going
steal it!” Now this was more like it.

“
And I’m helping how?” she
said, playing up her dumb persona.

“
Okay, listen carefully this
time.” His exasperation was beginning to shine through. “You’re
going up to Carson City and find Audrey’s brother, William Tajan.
You’re going to tell him you’re Audrey’s daughter. Then, you’re
going to get those Indians to go out and dig up that
treasure.”