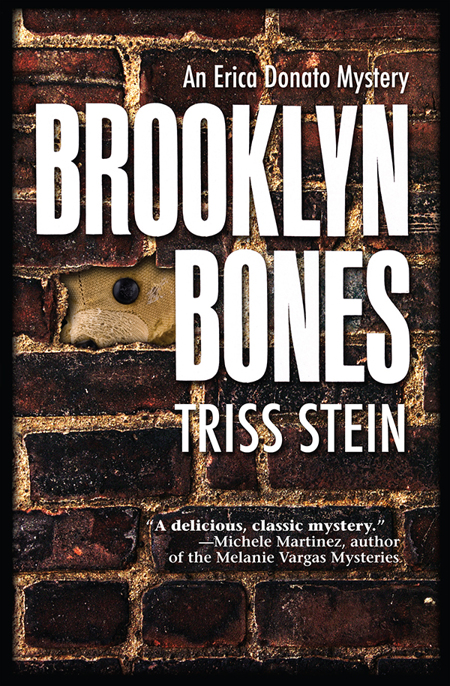 The historical characters and events portrayed in this book are inventions of the author or used fictitiously.

To the memory of Marilyn Wallace

Borrowing the great words of E.B. White,
“It is not often that someone comes along who is
a true friend and a good writer.”

Thanks first to my writing group. Sometimes we have so much fun we forget to talk about writing, but you are the people who advised and prodded, encouraged and told the truth:
the late
Marilyn Wallace, Meredith Cole, Jane Olson, Mary Darby. There are not enough ways to say thank you.

Thanks to Phyllis Cohen, who knows why; to Lee Lofland and Linda Fairstein, who generously share their expertise with members of the mystery community; to Michele Martinez, who was the very first reader; to forensic anthropologist Amy Zelson Mundorff, who provided some crucial facts; to the members of Mystery Writers of America and Sisters in Crime, organizations that mean home for mystery writers at all stages of their careers;
and to the team at Poisoned Pen Press, who saw something in this book and made it happen.

Thanks, as always, to Bob, reader of contracts, fixer of computers and proofreader in chief, and to
Miriam and Carolyn, my cheering squad.

It began with a sobbing phone call from my daughter, the kind of call every parent dreads. All I made out was that something terrible had happened; she was terrified, would never get over it. It was all my fault.

Chris is fifteen. Pretty much everything is all my fault, and yet—and yet—her voice told me it was more than teenage hysterics. Maybe.

With my heart in my mouth—oh, yes, some of those old clichés are dead accurate—I slapped a note on my desk to say I was out for the afternoon, ran out of the museum where I was an intern, and hustled across downtown Brooklyn at an undignified half-run. I was in and out of the subway and running up the stairs to my house less than half an hour from the moment the phone rang.

“Oh, mommy.” She flew from the back room and threw herself into my arms.

Well, I thought. She hasn’t done that in years.

The contractor who is renovating my house appeared behind Chris.

“Come on.” He patted her curly hair. “You know you’re all right. Here’s your soda. Drink up now. No one can drink and cry at the same time.”

She shook her head, hard, without lifting it off my shoulder.

Meeting my eyes over the back of her head, he said calmly, “Erica, we do have a problem.”

Joe, my friend, my biking buddy, my contractor, is big, dark, deliberate. He’s always calm. He says I will be too, when I get another decade down the road. I tell him not to treat me like a kid sister, and that he’s learned to be cool because it was necessary to his work. He has to be calm, dealing as he does with stressed-out homeowners in the throes of expensive, complicated renovations of century-old houses.

I sat down on a drop cloth-covered sofa, Chris in my lap. In the tiny part of my mind not crazed with anxiety I wondered when was the last time she’d let me hold her like this?

“We do have a problem,” he repeated. “Chris, do you want to tell or should I?”

As his quiet voice got through to Chris, the sobbing subsided.

“If someone doesn’t tell me something, right now, I’ll be hysterical myself,” I said.

A muffled moan came from my shoulder. “We found something today when we broke through that wall.” Joe pointed to broken plasterboard, and behind it, what looked like a long-hidden, crumbling fireplace.

Chris shuddered, as she whispered, “It was awful.”

“All right, Erica. Brace yourself. We found some bones behind the wall.”

His seriousness chilled me. “I don’t understand. Mouse bones? That’s what this is all about?”

He shook his head. “Not mouse. It’s human, and Chris found it.” The sobbing on my shoulder renewed its intensity.

“OK.” I took another breath, a little shaky this time. “Let me get this straight. Chris is all right. And you were working on the house, like always, and you were taking down that wall and you…”

“Me!” Chris suddenly sat up. “It was me. I found them. And if you hadn’t made me take this dumb job working for Joe, I never would have. And now I’ll have nightmares forever.” She jumped up from my lap and ran upstairs. I was too stunned to move.

Joe smiled sympathetically. “She’ll get over it, but I have to tell you, it shocked both of us.”

I didn’t want to discuss my daughter’s emotional state, so I turned to something safer. Plain facts.

“Tell me again. I can’t quite take it in. I have heard stories like this, but I never believed any of them.”

“Yeah, I guess I’ve heard those tall tales, too, but I know a guy who really did find a skeleton behind the wall in an old house. It was an infant, probably someone’s secret baby, from way back when.”

I shuddered. “And this?”

He hesitated. “I’m no expert, but it’s not a baby, and not so old, I guess.” He saw me turn pale and added quickly, “No, no, it’s not a recent corpse. Only bones. Mostly bones, anyway. But I had to call the police.”

“Of course,” I said, absently, still in shock.

“We ought to leave it alone, not touch it, until the police come.”

He pointed to the jagged hole Chris had smashed in the wall, and gave me his flashlight. I took a deep breath and stuck my head in. It was a walled-over fireplace, all crumbling brick and tile. A musty, sour smell filled the space. Mice, I thought, and yes, the flashlight beam caught a few tiny bones, then a flash of silver.

It was a human body all right, folded up to fit the space, but neatly arranged and partly dressed, and pathetically small. I knew the living person had probably been bigger, that the skeleton tends to collapse. Even in the dim flashlight, I could see there was more there than bones. The body was wearing what was left of a tie-dyed t-shirt, and it was wrapped in the shreds of an Indian print cloth. She, he, it must have been wearing jewelry. The flashes of silver shone from among the wrist and finger bones, and near the head where the ears might have been. The bones of one arm may have been wrapped around a large teddy bear. Neatly arranged along one side of the body were colorful tattered squares, magazines perhaps, and a twisted object made of metal piping.

The sight took a minute to sink in, and when it did, I stopped breathing. I was looking at the remains of someone young enough to hug a teddy bear. Old enough to wear jewelry. I thought of Chris’ room, with her stuffed animals still lined up on her bed, and her vast collection of earrings, and my eyes stung.

It was warm and dry in there, Joe was explaining in a voice that seemed to come from very far away. A heat pipe ran behind the back wall and the dry heat preserved a lot.

Yes, I could see that.

“So you can see why I think it’s not that old?” Joe’s voice came from behind me.

“That metal thing is a bong.”

“You fill it with water and get a nice, soft smoke.”

My astonishment must have showed in my face, because he said with a dismissive gesture, “Ah well, it was all a long time ago, in my wild youth.”

“Joe.” My voice shaking. “This looks like a burial, doesn’t it?”

“Afraid so. Hey, you look kind of pale. Do you need to put your head down on your knees?”

“No, no, I’m OK. It’s not the bones so much. I took an archaeology course. I’ve seen bones. It’s the teddy bear. And the hair. Dear lord, Joe, did you see that? There’s still hair on the skull. This was once a real person, with light hair and a teddy bear.”

He handed me Chris’ still cold soda and I touched the icy metal to my face as he gently guided me away from the wall.

“You know,” he went on matter of factly, obviously trying to distract me, “Chris is doing fine on this job. She’s been a lot of help, and she’s really earning her paycheck.”

He went on talking, but I didn’t hear him. This was all my fault, Chris said, and in a way it was true. I had insisted she take this job, and I knew exactly how she felt about it. She made sure of that by leaving a resentful e-mail to her best friend up on the computer screen. Only someone who’d never heard of Freud could think that was an accident.

Joe disappeared into the back of the house, and I paced up and down around the mess in the room, trying to figure things out.

My daughter was upstairs crying, and I didn’t know what to do with her. Or for her. She was so angry, I didn’t know if she would let me near her.

Not so long ago, there would have been no question about what to do. I’ve been a mother since I was twenty, and I was thrilled right from the start. My husband was too. I guess we were too young and dumb to be scared. And all these years after he died, years when it was only Chris and me, we were the best of friends, our own little family of two.