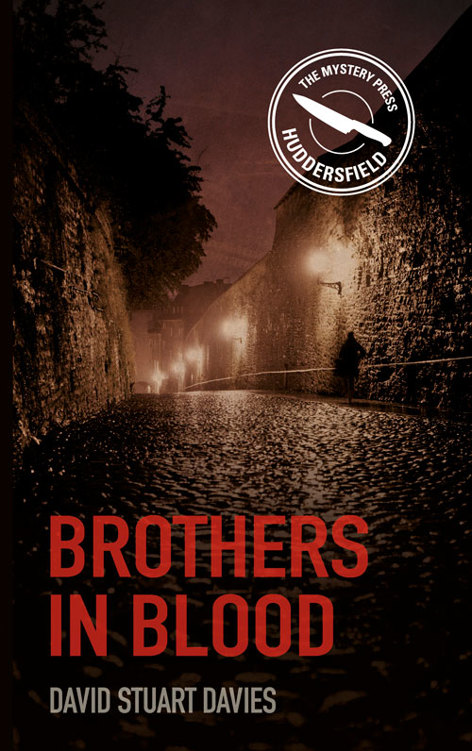 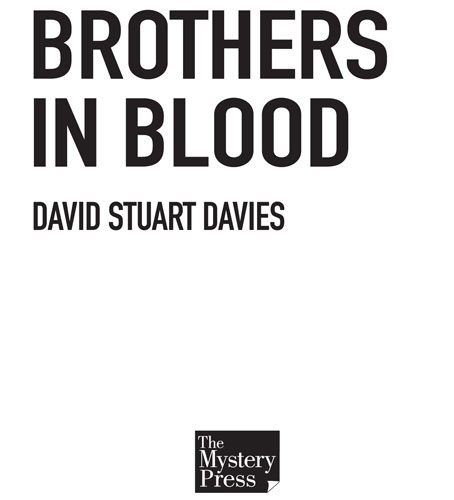 To Katie, as always, with love.

Despite their nervousness and apprehension, they were very patient in those days. Simply because they could afford to wait. Time, eternity, the future and youth were all on their side. For them the whole unfolding nature of life was just beginning. There was no rush; such bright boys could pace themselves. The arrogance of salad days quelled all other dark concerns. Future dangers were unthought of. Here they were: ready for the big adventure. They had made the decision. It was irrevocable. Although there was no going back, equally they were in no hurry. It had to be done properly and so they were content to take their time until everything slotted neatly into place. There must be no mistakes.

It had been agreed between them that once the lucky prize winner had been chosen, the recipient of their beneficence, as Laurence referred to him, they would stick to that decision, no matter what obstacles were thrown in their way. That was part of the appeal, the thrill of the venture. After all, it wouldn’t be as much fun if it all went too easily. There had to be some difficulty, some danger to spice things up.

After all, fear was part of the drug.

And this was the night.

One for the memory bank.

It was Laurence, of course, who had picked out the old guy and the other two had readily agreed that he seemed an ideal candidate. He looked ragged and desperate, hostel based no doubt, and with no real function in the world. A piece of shit on the heel of society. Please feel sorry for me, his grubby demeanour seemed to say to them. I fucked up my life and I just exist from day to day so I need your sympathy and generosity. Please give me money to enable me to get drunk, piss my pants, sleep in a stinking room with a lot of other dead beats and then face another day of degradation and begging. Please feel sorry for me.

There was no debate. He was better off dead.

And so they waited, the three of them, in that dingy, foul smelling boozer with the noisy one-armed bandit, crap music, grim lighting, sticky carpet and with what they regarded as the greatest collection of low life ever seen under one roof. Alex did make a comment about it being a good job P.T. Barnum wasn’t still around or he’d sign up the whole lot for a freak show attraction under his big top. These solitary creatures were glimpsed through eddies of cigarette smoke which swirled lazily about the place like swathes of grey ectoplasm, further heightening the unreality of the occasion.

Laurence was aware that they would have looked odd themselves in such an establishment if they’d gone as
themselves
. They would have stuck out like three vicars in a brothel. A trio of young, clean and intelligent faces would have really attracted the attention of the degenerate clientele. However, on Laurence’s instructions they had carefully dressed down for the occasion – way down, almost into the realms of fancy dress – and altered their natural appearance with greasy hair, a few fake tattoos and grimy stubble. Laurence, who had a talent for this kind of thing, was almost unrecognisable from his usual debonair and arrogant self. Their theatrical efforts had paid off for they blended in perfectly with the surroundings and no one took any notice of the three scruffy lads huddled in the darkest corner of the bar. They had become invisible men.

The other punters sat, their noses stuck in a glass, considering the ashes of their lives and only acknowledging another human being when they grunted at the barman asking for another drink.

Their chosen prize winner, whom Laurence had christened Alpha Beta, sat at the end of the bar, perched precariously on a rickety stool, nursing a pint of cheap dark beer. Apart from the moments when he took large gulps from the glass, his throat pulsating in a strange reptilian fashion, he could have been a waxwork doll. Surreptitiously they studied this creature whose face was ingrained with the grime of the street, the nose raddled and bulbous with pores like small moist volcanic craters and eyes that were rheumy, lifeless and bleak. He could have been aged anywhere between forty and seventy.

One thing was for sure: he wasn’t going to get much older.

God knows what he had been in some other life, thought Russell. He’d been a son, probably a husband, maybe a father and most likely an employee at some time. What had happened? What had he done or what had been done to him to cause the humanity to seep away? How had he become detached, amputated from mainstream society? What tragedy or what farce had brought him to the gutter? He almost felt sorry for the bastard. Well, he thought, his suffering was almost over.

‘You know he’s going to stay here until chucking out time.’ Russell observed quietly. ‘It might be best if we wait for him outside.’

Laurence shook his head. ‘That will look far too suspicious: a group of youths hanging about outside a pub late at night. We don’t want to have some diligent copper pulling up in his police car to ask us what we’re doing. No. We wait in here.’

They had drawn lots to see who was to be in charge of this particular operation and, to the relief of Russell and Alex, Laurence had won and so they were obliged to obey any decision he made. That was part of the rules.

And so they continued to wait. They waited through another two pints that Alpha Beta downed sporadically. It was nearing closing time and the clientele began to leave. Like rusty automatons, they shuffled towards the door individually, dragging their weary limbs out into the winter cold, solitary grey figures, Billy no mates, off to some grim and greasy bed somewhere. Life on the planet Scumball.

Eventually, Alpha Beta slipped off his stool and gave the barman a vague, drunken smile and headed for the door. He swaggered past their table without a glance in their direction, his eyes hooded with inebriation. As he passed through the door, the three of them exchanged nods. This was it.

Russell grinned nervously. Fear and excitement throbbed through his body and he suddenly discovered that his hands were clammy and beads of sweat were trickling down his brow. But strangely he found that it was a thoroughly pleasurable sensation, acknowledging possibly for the first time that this was a game no more. This was the real thing.

He glanced across at the other two. Alex seemed to be sharing similar emotions: eager but anxious with a touch of suppressed fear in his fixed expression. Laurence was as cool as ever, his face almost blank apart from a hint of excitement in that feral grin that hovered briefly on his thin, pale lips.

They waited exactly one minute before following their prize winner out into the dark. He hadn’t gone far. He was less than thirty yards ahead of them, a shambling silhouette, shuffling aimlessly along the pavement occasionally muttering to himself, his breath escaping in small white clouds into the sharp air. Without a word, they followed him casually at a safe distance.

It was late November and a patina of frost was in the process of icing the pavement. In the distance, to their left, they could see the vague shapes of the town’s Christmas decorations: the garish coloured lights, the large illuminated Santas and grinning snowmen. However, the council’s Christmas cheer didn’t stretch to this benighted part of the town. This was no-man’s land, ignored and rejected by the local burghers. No fairy lights here – only the harsh yellow glare of sodium lamps.

As mere foot soldiers, Russell and Alex waited obediently for Laurence’s command. He was aware that although the street was quiet with no pedestrians in view, the road was too well lit, too busy with traffic for it to be safe to take action now. They would have to wait until the sad old bastard turned into a quieter thoroughfare, which thankfully he did after about ten minutes of shuffling.

Patiently the three youths followed Alpha Beta as he tottered down a quiet, dingy street where conveniently several of the street lamps were out of order. With suppressed excitement they pulled on their gloves and exchanged knowing glances.

‘Get ready,’ said Laurence with a tight grin, his eyes glittering eerily in the darkness.

Alpha Beta was now passing a small patch of waste ground which had an electricity substation on it.

Extracting the hammer from the inside of his parka jacket he jogged ahead of the other two and caught up with their prize winner.

‘Excuse me, sir. Sorry to bother you, but have you got a light?’

Alpha Beta, his brain clouded with alcohol, turned slowly and awkwardly to respond to this request.

As he did so, Laurence raised the hammer high and brought it down on the fellow’s skull with great force. There was a sharp crack similar to the snapping of a stick of firewood and Alpha Beta, eyes wide with shock and confusion, made a brief gagging sound as though he had a piece of food stuck in his throat. Laurence hit him again with more ferocity this time. Alpha Beta fell silent and dropped to the ground like an old pile of clothes. Alex and Russell rushed forward and bending over the body stuck their knives repeatedly deep into the fellow’s chest and stomach. The soft flesh offered no resistance to the sharp blades.

They grinned and chuckled. It felt good.

Alpha Beta grunted quietly while his body shuddered as it received the wounds. Blood spilled out, splattering his coat and running on to the pavement. His killers stepped back to avoid it contaminating their shoes. He rolled over on to his face and they watched for a moment while life oozed out of his body. Eventually he lay still, one glittering eye visible, staring sightlessly at a small stream of his own blood.

‘Mission accomplished chaps. Game over,’ grinned Laurence. ‘Well done.’ For a moment they gazed down at their handiwork, capturing the image in their minds.

One for the memory bank.

Then, with a quick shake of hands, the group dispersed with some speed, each making their separate way home.

Detective Inspector Paul Snow gazed at his face in the shaving mirror. He didn’t like what he saw. He rarely did, but on this occasion his natural revulsion was stronger than usual. His skin was blotchy and dark circles shadowed his eyes. He looked unhealthy and haggard. He wasn’t sleeping well and he wasn’t thinking straight most of the time. Of course he knew why. His past was coming back to haunt him in spades; closing around him like some invisible straitjacket, clamping itself around him, suffocating him, and he had no idea what to do.

Crisis by Ken McClure
The Tao of Dating: The Smart Woman's Guide to Being Absolutely Irresistible by Dr. Ali Binazir
Bright Young Royals by Jerramy Fine
Yom Kippur as Manifest in an Approaching Dorsal Fin by Adam Byrn Tritt
Rogue's Hollow by Jan Tilley
Holiday Sparks by Taryn Elliott
Scarlett Epstein Hates It Here by Anna Breslaw
Something to Hold by Katherine Schlick Noe
On the Blue Comet by Rosemary Wells
Find Me by Debra Webb