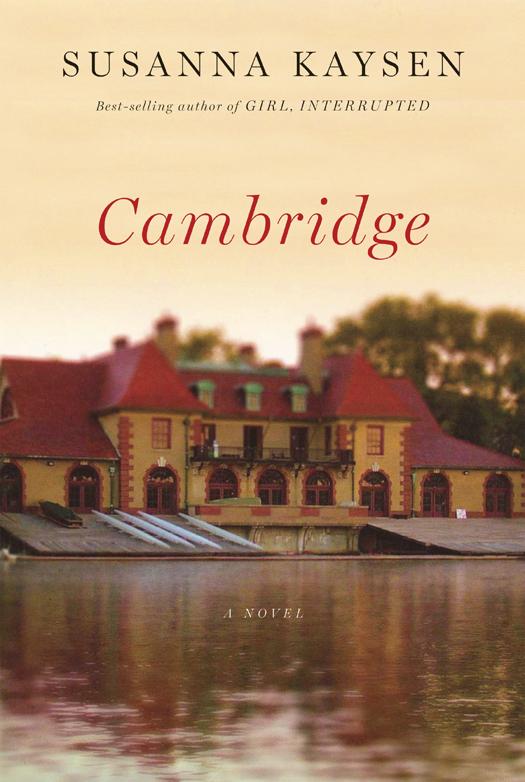 This is a work of fiction. Names, characters, places, and incidents either are the product of the author’s imagination or are used fictitiously. Any resemblance to actual persons, living or dead, events, or locales is entirely coincidental.
Jacket photograph by Della Huff
Jacket design by Gabriele Wilson

To Fall in Love with Old Cape Cod

It was probably because I was so often taken away from Cambridge when I was young that I loved it as much as I did. I fell in love with the city, the way you fall in love with a person, and suffered during the many separations I endured.

In the summer before our October departure for England, the screen door to the backyard broke and had to be replaced. The new door had a hydraulic canister that hissed when it opened or closed instead of smacking,
thump, thump
, the way the old door had. I didn’t like this. Neither did my cat, Pinch. Pinch would use the new door to go out of the house, but she refused to come in through it, and she’d sit by the front door waiting for someone to notice that she’d decided it was time to come home. After three weeks in England, I felt the same way: Okay, let’s go home now. It’s time to go home. But my parents, looking out their new hydraulic door to England, didn’t notice me, and, like Pinch, I had to sit there hoping and hoping.

For my father it was a kind of homecoming. He’d spent the war in London analyzing aerial reconnaissance photographs of German cities to pick targets for the air force. Midnights, he and his comrades stood on the roof of the townhouse where they were billeted and watched the bombs fall, heedless, twenty-three, and abroad for the first time. The damask-and-mahogany hotels, the parks and the Embankment, the Elgin Marbles back from the tunnels of the Tube where they’d been hiding from the Luftwaffe—now he could show all this, his former kingdom, to my mother.

My mother was preoccupied with the oven. She’d been forewarned that there wasn’t any heat; nobody had mentioned the oven. The burners worked, but the oven was in a coma. She enshrouded a whole chicken in aluminum foil (alu
mini
um in England) and roasted it over the coals in the living room fireplace in an attempt to make a nice dinner—a nice dinner being
something other than a greasy chop or noodles (this was the era before noodles became pasta). It was a failure. It was a poached chicken, pallid, wet, raw in places. The oven, the oven. When was my father going to get somebody to explain or fix the oven?

My father had gone to France for the day to get us a car. It was a tiny English car named a Hillman. How or why it had emigrated to France was unknown. He went with a friend who was a French count, who had found us the car. Why my parents had a friend who was a French count and how they had finagled him into finding them an English car in France were not questions I asked at the age of seven. The car, my father, and the count all appeared at our London doorstep just as my mother was unveiling the disastrous chicken she’d made as a thank-you dinner for the count.

But they were young and full of life and they went out for dinner instead, leaving me with the somber Swedish nanny, who made noodles on the stovetop.

Nanny
is a misnomer. Frederika was my mother’s aide-de-camp. She came from an aristocratic Swedish family. Her father had dropped the
von
in solidarity with socialist ideals. She had little experience of stovetop noodles, either eating or cooking them. It turned out when she came to live with us in Cambridge that she was a marvelous cook, but she needed six fresh herring or a whole side of salmon or a handful of cardamom and a long twisty ginger root to do her Swedish magic. Though it was ten years after the war, England didn’t supply this sort of thing. Noodles and candy, with the occasional tough hunk of mutton, was what was on offer.

She was only eighteen. I thought of her as a grownup, but she was a kid away from home for the first time, just like me. Our family must have been a puzzle to her. Moody. We were all liable to black moods, which we tried to cover up with not
much success. My father was best at it because he was always busy. If he wasn’t going to France to get hold of a car, he was dashing around London revisiting war glories and teaching at the London School of Economics and on weekends packing my mother into the tiny car to go on expeditions while Frederika and I stayed home with the baby and squabbled about the toilet.

The English toilet was a nightmare. Every day the toilet convinced me—though I needed no more convincing—that we absolutely had to go home.

At home, in Cambridge, we lived in a three-story wooden Victorian house with a square backyard where an old willow hung its whips for me to catch and tear off. The grass grew an inch a day in June, and in January the wind blew around the frames of the double-hung windows with a cheerful rattle. My bathroom had a magnificent claw-foot bathtub fifteen inches longer than I was and my parents’ had a blue-tiled shower, and gallons of hot American water gushed out of both of them. We even had a third, extra toilet tucked under the front stairs beside the coat closet, in a tiny room my mother had painted dark red “to emphasize the coziness.”

In England we lived in a skinny four-story brick coffin set upright on one short end with a skinny, long, coffin-shaped cobblestoned yard in back that contained some scratchy yews and a million spiders, though once I saw a ball of excitement that might have been a hedgehog. Each floor had two rooms: one that faced the street and one that faced the yard. Some rooms had a fireplace equipped with what looked like the inside of a toaster: the gas fire. The kitchen was in the basement, an arrangement that made no sense unless you had servants. Also in the basement, down a dark hall that felt longer than the house (I knew that was impossible, but still), the sole toilet squatted in porcelain malevolence. Near my parents’ bedroom was a tub in
what was literally a bathroom, where you couldn’t pee, though I’m sure my father used the sink.

The terrible toilet was big and was mounted on a wooden plinth. I could barely get onto it, and once on it, I worried I’d fall into it because the seat was so wide. The room was a nine-foot-high sliver only inches broader than the toilet. Its clammy walls pressed in on anyone who sat there. Up above, mounted like a moon on the ceiling, was the flushing mechanism: a box of water with a chain and pull that wasn’t reliable. Sometimes when I pulled it, having made the little hop I needed to reach it, it didn’t move. Maybe it was on strike against Americans, like the useless oven. The room smelled of old pee and old plaster and old damp.

Frederika got mad at me for using the chamberpot to pee in at night.

“Are you going to clean that?” she asked.

“I haff to clean that,” she pointed out.

I loved Frederika almost enough to use the terrible toilet.

It was a long trek in the middle of the night, down past my parents’ bedroom and the living room to the dank corridor and the prison cell of the toilet room. Some nights I made the whole trip in good faith and then, faced with the plinth and the rank odor, trudged back upstairs to use the pink-flowered chamberpot that lived under my bed. Then Frederika would get mad again. It might take her a couple of days to find it, though.

“But, Frederika,” I was inspired to say once, “why are the chamberpots there if we’re not supposed to use them?”

“From olden times,” she said. “Now, you must use the toilet.”

Things improved when I was sent to school.

My parents had found a coeducational day school, wildly progressive for England. By American standards—that is, by my standards—it was out of
Oliver Twist
, a book my father had given me when we arrived in England. It did have pretty good toilets, which halved my visits to the bad toilet at home. The
Oliver Twist
parts were uniforms (pleated plaid skirts for girls, gray flannel shorts for boys, gray flannel jackets for both), lining up for everything (they called this a
crocodile
), including going to the toilet, speaking only when spoken to, and reciting in unison a litany named the “times table.”

Every morning the same ritual.

“Two times one is two.

And on up to ten times ten. When twenty-five seven-year-olds chanted this all at once it made no sense. It took me a week to figure out that it was English, I mean, that the words were in the language we shared, or pretended to share, or, in fact, didn’t share.

I asked my father what it was all about.

“Okay. But what does it mean?”

“It’s like addition. You can do that. Two plus two is four, right?”

“I guess.” I’d never been very interested in addition.

“It’s just another way of saying that. Two
plus
two is the same as two
times
two.”

“What does it mean, though?” I asked.

“It means, Take two two times, and you get four.”

“So two times three is like two plus three?”

“But when are these times?” I asked.

“Why don’t you talk to the teacher,” my father said. “Ask her. She will be better at explaining it for you.”

“We’re not supposed to talk,” I said.

“Look, it’s just a different way of talking about addition. It’s a shortcut.”

“You said that. The different way. So why not just do addition?”