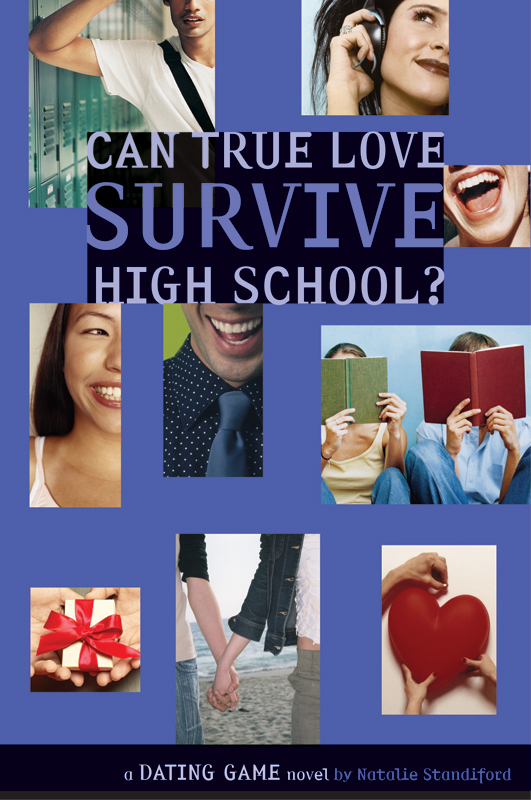 4: The Rabbit-Faced Boy of Her Dreams

8: A Lady of the Theater

Here's a sneak peek at the Dating Game #4 X-Rating

For the two Kathleens—Nixon and Clare—and all the Natalies: Natalie Rebecca, Natalie Elizabeth, Elizabeth Natalie, Natalie Zofia, and Natalie Jane.

From: your daily horoscope

HERE IS TODAY'S HOROSCOPE: CAPRICORN: Whatever little scheme you're cooking up in that brain of yours—forget it! I'm telling you, it's going to blow up in your face. Are you listening to me? Hello?

Heads up—sterling quad's spring blowout is three weeks away. why don't you haul your busty little self up here for it? I'm sure curt and jen won't stop you. it's a huge party all weekend. You haven't visited me once yet and my freshman year is almost over! bring mads and lina if you want (if their jailers will let them out). I miss having you around to make me feel superior.

Holly Anderson forwarded the e-mail to her best friends, Lina Ozu and Madison Markowitz. The Pipester, aka Holly's older sister, Piper, was a freshman at Stanford University. Holly would have visited her at school a long time ago—Palo Alto was only about an hour and a half away from home—but Piper had never invited her before. Typical of Piper to make it seem like Holly had neglected her, rather than the other way around.

Ding!
An instant message. Mads had already gotten the e-mail.

mad4u: I'm there! But I have to ask m.c. and the overlord first. Piper is right when she calls them jailers. Free the carlton bay two!

By that she meant herself and Lina, the only two fifteen-year-olds in Carlton Bay, California who weren't allowed to do whatever they wanted, whenever they wanted. According to Mads, anyway. Holly's parents, Curt and Jen, were more permissive.

hollygolitely: bet your parents will give in if lina's say yes.

Another IM came in, this time from Lina.

linaonme: I already asked sylvia. She said we'll see. Should have gone straight to dad.

mad4u: we have to go! krazy kollege weekend! I'll die if I miss it!

hollygolitely: you've got 3 weeks to find a way.

hollygolitely: me 2. Let's go 2gether. It's too chick-flicky for rob.

mad4u: stephen too. Also 2 dopey for him.

Kiss Me, Stinky
was a new movie that had just opened at the Carlton Bay Twin. Rob Safran, a hunky swimmer, was Holly's boyfriend and Mads had just started seeing the brainy, serious Stephen Costello. Lina didn't have a boyfriend. She was in love with Dan Shulman, their Interpersonal Human Development teacher. Maybe if Liam Price, the latest teen heartthrob, went to their school she'd forget about Dan. But Holly doubted it. To Lina, Dan was almost as unattainable as a movie star, but that didn't stop her from building her world around him.

hollygolitely: fowlers coming over for drinks. With britta. I'm going 2 try 2 find a boy 2 match her with.

linaonme: good luck. R u sure she likes boys?

hollygolitely: pretty sure. I think she prefers amoeba, tho.

“Britta has just
struggled
with Calculus this year,” Peggy Fowler said. “Haven't you, honey? I think she got an A-minus on the last test.”

“An A-minus doesn't cut it at Harvard,” Gordon Fowler said.

Holly sipped her iced tea and smiled and nodded at the Fowlers. They were sitting in front of the big stone fireplace, now filled with vines and flowers for spring, in the great room of the Andersons' comfortable contemporary house. Eugenia Anderson, Holly's mother, had put out some cheese and olives and vegetables to have with cocktails. She wore her favorite long, red, embroidered caftan with flat gold slippers, her straight dark hair chopped at her pointy chin. Holly's father, Curtis— dressed in his usual expensive golfwear, his round, ruddy face hearty with cocktail camaraderie—shook martinis. Holly sat on the couch, bare feet tucked under her, in jeans and a t-shirt. She didn't see any reason to get dressed up for the Fowlers.

Across the coffee table from her, the Fowlers sat lined up in a row, Papa Bear, Mama Bear and Baby Bear. Baby Bear, or Britta, a junior at the Rosewood School for Alternative Gifted Education (RSAGE), where Holly was a sophomore, was almost as tall as her father. She had his big bones and abundant curly brown hair, her mother's large brown eyes, and a reticent, shy manner that wasn't much like either of them. She wore small, silver-rimmed glasses and a long-sleeved flowery dress. Holly would have bet cash money that Britta's mother had picked it out for her.

“I don't want to go to Harvard anyway,” Britta said.

“Oh, that's right,” Peggy said. “You want to go to
Stanford
.” She pronounced “Stanford” as if someone had offered her a dirty diaper with her drink. “With all the jocks.” Then she glanced at the Andersons, remembering that Piper, their older daughter, was a freshman at Stanford. “Don't get me wrong, it's a
great
school. I just don't think it's the best place for Britta.”

“They have a good microbiology department,” Britta said.

“What if you get into Harvard?” Gordon said. “Or Yale? Are you telling me you'd turn them down for Stanford?”

Holly sucked a slice of lemon out of her glass and gnawed on the rind. If she had to sit there and listen to another minute of this she'd scream. She was looking forward to college as much as anyone, but the Fowlers were so obsessed…. Poor Britta, Holly thought. She really needs help. Why didn't Jen jump in with some kind of trivial social news? That was her specialty, and she normally didn't let dull conversations drag on this long without interruption.

“I worry about Britta,” Peggy went on, as if Britta wasn't sitting right next to her. “Do you know she's never been out on a date, not once? Ever? And look what a pretty thing she is.” She lifted one of Britta's curls as proof of her prettiness.
And she
is
pretty
, Holly thought.
Or she could be, if she loosened up a little. But how is she supposed to do that with her parents on her back every second?

“Sixteen,” Peggy said. “So she must have been out on at least one date by now, hasn't she, Jen?”

Jen cast a cool glance at Holly. “Ha! One date! The girl's been a boy-trap since she was twelve.”

“Just look at her!” Jen added.

Everyone stared at Holly, judging her boy-trapping qualities. She had long, wavy blond hair and a full red mouth, but Holly knew what Jen was really referring to when she called her a boy-trap. Her breasts, which were a little on the big side. Okay, a lot on the big side. They used to embarrass Holly, but now she wasn't bothered by them—except when someone
very rudely
drew attention to them. Her own mother, of all people, should know better by now.

“She's a looker, no doubt about it,” Gordon said.

Holly officially wanted to die. Or kill her mother. Or both. Usually Jen was more of social smoothie than this. She must have had a little too much wine already.

“Well, I don't see why Britta shouldn't have a boyfriend, too,” Peggy said. “It's part of high school. She's only got one more year left. As long as it doesn't affect her grades or any of her other activities.” She stared at her daughter, thinking this over, still playing with Britta's hair. “It's not that boys don't like her. I think she's afraid.”

Britta pushed her mother's hand away from her face. “I'm not afraid. Do we have to sit here and talk about this in front of everyone? It's none of their business. And it's none of yours, either.”

The room went silent. Holly was afraid to move anything but her eyes, which darted from Britta to Peggy to Gordon to Curt to Jen. Everyone was frozen in an awkward moment. Somebody do something!

“Peggy, remember Martha Bray, that skinny girl from St. Elizabeth's?” Good old Jen, right on time. She and Peggy had gone to a fancy Catholic boarding school together. “I saw her name in the paper the other day. She and her husband own a vineyard up in Napa.”

While they yammered away about prep schoolmates and the men mixed more drinks, Holly nodded at Britta. “You don't really want to sit here and listen to this, do you? Let's go up to my room.”

Holly had to agree with the Fowlers on one point— Britta needed something to get her out of that house and away from them. And a boyfriend was just the ticket.

“And mine aren't?” Holly said. “Britta, you need to relax. Yo u need some distraction from all the pressure you're under.”

“Sometimes I think so, too,” Britta said. “But who has the time?” When she wasn't doing schoolwork she was padding her college transcript with activities like basketball, internships at hospitals and laboratories, volunteer work at a nursing home, violin lessons. Experience with boys would not help her get into college, Holly knew. But college was just four years of your life. It wasn't everything. And anyway, didn't they say it was good to be well-rounded?

“You make time.” Holly sat down at her computer and logged onto The Dating Game, a Web log that she and Lina and Mads had started. It began as a school project, a survey of the sexual attitudes of their fellow students, and morphed into a matchmaking site with personal ads, quizzes, questionnaires, and an advice column.

“Want to fill out one of the matchmaking questionnaires?” Holly asked. “Just for fun?”

Before Britta had a chance to answer, Holly filled in her name, age, and other vital information. “Gender … grade … Are you a virgin?” Holly assumed the answer was yes.

“Okay,” Holly said. She pulled up an extra chair and patted the seat. Britta obediently sat down. “Have you kissed someone of the opposite sex?”

Holly's head wanted to shake in disapproval, but she checked it. Seventeen years old and never even kissed a boy! This was an extreme case. “I guess I can skip these,”

she said, pointing to the questions about going to second base, third base, and so on. Next came the inkblot test. Holly showed Britta a symmetrical black blob and said, “What's the first word or image that comes into your mind when you look at this?”

Britta peered at the blot. “A poorly dissected frog.”

“O-kay. What are your dating requirements: Cuteness? Brains?”

Britta suddenly looked horrified. “You're not going to fix me up with someone, are you?”

“Of course. What did you think we were doing?”

“I'm not ready,” Britta said. “I don't want to go out with some strange boy I don't even—”

“Relax. We'll deal with that part when we get there. Now just answer the question. Hypothetically. If you went out with a boy, what would you want him to be like? It's a perfectly reasonable question.”