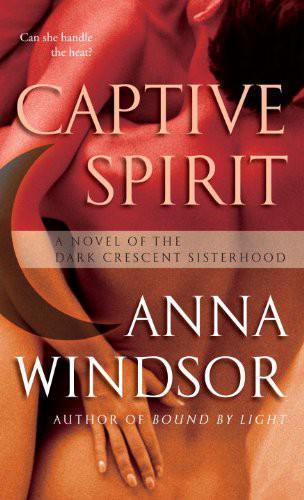 Bound by Shadow
Bound by Flame
Bound by Light

Captive Spirit
is a work of fiction. Names, characters, places, and incidents are the products of the author’s imagination or are used fictitiously. Any resemblance to actual events, locales, or persons, living or dead, is entirely coincidental.

B
ALLANTINE
and colophon are trademarks of Random House, Inc.

This book contains an excerpt from the forthcoming book
Captive Soul
by Anna Windsor. This excerpt has been set for this edition only and may not reflect the final content of the forthcoming edition.

For my new friends at WSH—
I’m really not working there just to research a book!

Not till we are lost, in other words not till we have lost the world, do we begin to find ourselves.

August, two years after the fall of the Legion

Bela Argos stood in her battle leathers on an ancient marble platform in the thick woods surrounding Motherhouse Russia, because she’d been summoned.

She stood in silence, watching her own breath curl outward in frosty plumes, chilled even in the milder spring weather, because she’d been trained.

She stood with her shoulders back, her chin out, her head high, because she had no choice.

She was a warrior of the Dark Crescent Sisterhood, a Sibyl sworn to protect the weak from the supernaturally strong, and she bore the mark of mortar, pestle, and broom in a triangle on her right forearm to prove it. If she’d rather tear out her own hair than be in this ceremonial clearing, on display with forty-two other earth Sibyls who shared her particular strain of pain and humiliation … well, that was just too fucking bad, wasn’t it?

The huge clearing, easily the size of the fighting grounds in an old Roman stadium, had been picked clean of leaves and limbs, and even the tiny stones left behind by melting snow and ice. The big stone pillar at the center, the one with all the names carved into its endless gray reaches, had been polished until it gleamed in the morning sunlight.

On Bela’s far left stood fire Sibyls and green-robed Mothers from Motherhouse Ireland, letting off steady streams of smoke. The area in the center had been packed with earth Sibyls and Mothers in brown robes from Bela’s own Motherhouse. The big space on her right had been filled with exactly one water Sibyl from Motherhouse Kérkira in the Ionian Sea—a lone woman named Andy Myles, dressed in an obnoxious canary yellow robe—surrounded by the soft blue robes of air Sibyl Mothers from Motherhouse Greece. These Mothers and the Sibyls they’d brought with them gave off a steady flow of warm, gentle wind Bela assumed was meant to be comforting.

Bela wished they’d stop with the hot air. She’d rather just hurt from the cold right now, because that felt honest and right. Her dark hair whipped in the breeze, stinging her eyes until the tears didn’t flow just because her heart kept trying to chew itself to pieces.

Mother Yana, the oldest of the Russian Mothers, made her way forward below the platform, walking with the aid of a gnarled wooden staff. She took a position near the gray stone pillar and raised her staff for silence, even though no one was talking.

She didn’t want to hear the rest of the speech, not any of it—because some of the dead had been hers.

Sibyls always worked in triads. Earth Sibyls functioned as mortars, responsible for choosing their fighting group, protecting it, and holding it together. Fire Sibyls, the pestles, handled communications, and air Sibyls, the brooms, fought at a distance, kept perspective, and cleaned up all the messes. In the old days, water Sibyls had handled emotional flow and concentrated on healing—but seeing as there was only one fully trained water elemental in the world right now, they weren’t currently a part of fighting groups, and they hadn’t been a part of the war with the Legion until its very end. Though Andy Myles had faced a devastating personal loss during the fighting, Motherhouse Russia, Motherhouse Ireland, and Motherhouse Greece had accounted for all the Sibyl deaths.

And Bela had suffered two of them.

The earth Sibyls with her on the marble platform had lost one or both of their triad sisters, too. Bela knew the Mothers intended to honor their pain by setting them apart from all the other Sibyls like this, but it sucked. It was horrible, and on most of the faces around her Bela saw the same shame she felt on her own. Motherhouse Greece and Motherhouse Ireland did the same thing for their Sibyls who had known losses in battle, when it was their turn to host the yearly remembrance of the dead—but that was different. Fire Sibyls and air Sibyls weren’t responsible for their fighting groups. They weren’t mortars.

Mortars who had cracked and let the life’s blood of their triad run out on the ground.

Mother Yana moved around the gray stone pillar, traveling past centuries of wars and battles and losses, until she came to the area dedicated to the war with the Legion. She focused her rheumy eyes on a spot halfway between top and bottom and started reading names.

Bela’s back got so tight she thought the bone would snap. It wouldn’t take long to get to the first one she dreaded—and here it came.

Bela’s hands shook, because she could still feel Devin’s cold, still body in her arms. Devin had been killed by a demon in a battle at Fordham University. Bela hadn’t been able to do anything to save her, but she’d tried. She’d tried so hard.

A few of the earth Sibyls beside Bela and behind her started to cry as their most dreaded names reeled past in the litany. Sometimes Bela saw the others flinch or twitch—just as she did when her second name got read.

Nori had been murdered a few months before Devin died, snatched away from Bela’s triad in the middle of patrol, broken like a doll, and left like trash in a dumpster by demons following the commands of a Legion-sponsored psychopath.

I never got to hold her and say goodbye. There wasn’t enough left
.

The name reading and the memorial prayer to the Dark Goddess seemed to last a century, and when the nightmare finally ended, it seemed to take another century to get everyone off the marble platform. Bela almost shoved the two women in front of her to make them hurry. She wanted off the platform and out of the clearing. She wanted to be back in her dark, quiet room deep in underground chambers beneath Motherhouse Russia. If she had her way, she’d stay there forever.

When she finally got to the bottom of the platform steps, somebody caught her by the elbow.

Bela turned around too fast, ready to curse the ass who had touched her—but she stopped in mid-snarl.

Riana Dumain Lowell, the mortar of the North Manhattan Triad, kept a tight hold on her arm.

Riana had her dark hair pulled back away from the shoulders of her battle leathers. Her dark eyes bored into Bela, hard but sympathetic—loving, but a little pissed off. During the war, Riana had been Bela’s good friend, and sometimes one of her better enemies. “Where are you going?” she asked, her calm voice sounding overcontrolled, even for her.

Bela glanced toward the spires of Motherhouse Russia, visible above the distant trees. “Home.”

Riana laughed, and from somewhere in the woods, the wolves that made themselves companions to the Mothers started to howl. “Motherhouse Russia was never your home. You belong in New York City. Come back with us.”

Riana’s gesture took in redheaded, fire-breathing Cynda Flynn Lowell and blond, gentle Merilee Alexander Lowell, her fire Sibyl and her air Sibyl. The three women had married brothers and shared the same last name now. They were all together, all happy, and all alive.

Screw every one of you
.

“I’m not going back to New York.” Bela pulled herself free from Riana, trying not to choke on the hot rush of envy and anger blasting up from her toes. “I’ve got nothing there.”

Riana shook her head and let Bela get about one step away before she said, “Over the years, I’ve thought a lot of things about you, Bela Argos, but I never took you for a pussy crybaby.”

Bela swung around, the ground shaking underneath her feet. She got in Riana’s face then, so close she could almost taste the mint from Riana’s last piece of chewing gum. “Please, give me an excuse to kick your ass. I’d probably feel better if I got to kill something.”

Riana didn’t give an inch. Instead, she held up a silver key on a string. “I’m not giving you an excuse, but I am giving you this. It’s the key to my brownstone. Sixty-fourth and Fifth, on Central Park. You remember the spot, right?”

Bela blinked and eased back a fraction.

Riana couldn’t be serious. The brownstone? That was one of the best properties in Manhattan, in Bela’s opinion.

“Take it.” Riana dropped the key.

Bela caught it on reflex. Her mouth opened to ask why, but the cold metal of the key captured all of her attention.

“My triad moved into our husbands’ townhouse.” Riana sounded sad now, but also relieved. “We just couldn’t stay in the brownstone anymore. The bad memories wouldn’t go away.”

Bela stared at the key. During the last battle with the Legion, Riana and Cynda, both nine months pregnant, had been kidnapped and locked in the basement of the brownstone. They’d had to give birth down there, alone and terrified, and they and their babies—now healthy, adorable kids, as far as Bela had been hearing—had almost died before Merilee rescued them.

“But I’m not ready.” Bela looked up and tried to hold the key out to Riana, but Riana was already walking away, back toward her very alive triad, then out of the clearing and into the woods, leaving Bela alone with the key, the cold, and the distant howl of Motherhouse Russia’s wolves.

“I’m not ready,” she said again, but the clearing was almost empty now, except for the marble platform and the gray stone pillar, with its endless observance of the dead and the gone and the not coming back again.

Okay, okay
, said the voices of two of those dead, Nori and Devin, echoing quietly in the back of Bela’s mind, as they had since the day they died.
But you gotta admit she’s right, as usual. It
is
a really good house
.