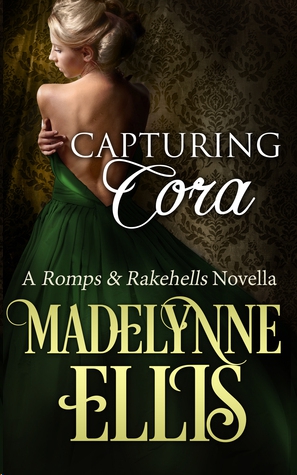 CAPTURING CORA Copyright © Madelynne Ellis 2014. Violators will be forced to drink mint and peapod wine. Believe me it’s bad! You don’t want to try it.

This edition published by Incantatrix Press 2014.

This is a work of fiction. The names, characters, places and incidents are products of the writer’s imagination or have been used fictitiously, and are not to be construed as real. Any resemblance to persons, living or dead, or to events or places is coincidental. All rights reserved. No part of this publication may be reproduced, scanned, or distributed in any manner whatsoever without the written permission of the author except in the case of brief quotation embodied in critical articles and reviews.

License Notes:
This eBook is licensed for your personal enjoyment only. This eBook may not be re-sold or given away to other people. If you would like to share this book with another person, please purchase an additional copy for each person. Thank you for respecting the hard work of this author.

CAPTURING CORA ~ Branwell “Tinker” Locke believes in grand gestures. However, when his marriage proposal to Miss Cora Reeve is dismissed as a jape, Bran has to find another way to persuade Cora of his utmost sincerity, even if it means using his tongue for something other than pretty words.

Cora believes Bran is simply set upon helping her win a wager, even though she longs for his love. In order to convince him that she really does want him, Cora will have to bare not just her heart and emotions, but all she has. Including things a lady should never give without a promise of forever…

A Wager & a Proposition

Six young ladies, five blondes and a brunette, occupied the skittles alley at Rievaulx House yet there was not a single chaperone in sight. This was why Miss Cora Reeve had chosen this particular moment to propose a friendly wager. “For after all,” she remarked. “None of us wish to be purveyed like horse flesh for a second season. A little incentive might spur us on in our pursuit of husbands. So, what say we agree that whoever secures the first proposal shall win a little something from each of the rest?”

“Cora, isn’t that gambling?” Harriet Cholmondeley asked from her perch atop the old pianoforte stool. Cora’s best friend was so petite and doll-like her feet swung inches above the floor. “Are you sure it’s quite right? Won’t our chaperones be vexed with us? I don’t wish to be sent home in disgrace.” Harriet’s gaze swung fearfully toward the window. Outside on the lawn their chaperones were partaking of tea.

“Well, I don’t comprehend the problem with being invited to another score of parties,” Biddy, the youngest of the group, remarked. Since her arrival she had been interested more in the accumulation of scandalous gossip than a husband. “I shan’t put myself out to secure a proposal. None of the gentlemen here would suit me at all. They are all too fond of themselves and indulging their vices. Lord Swansbrooke spent forty minutes last night reciting the names of his hounds to me. As if I should care that he has one named Horace, let alone three.”

Cora ignored Biddy and focused instead upon her dearest friend, whose hands she clasped reassuringly. “What will our guardians care about a few chicken stakes, Harriet? Heavens, I only mean for you to win my hat. None of us are set upon compromising our virtue. Nor do I believe I’d be able even if I were intent on such a thing, with both my mother and Aunt Tessa watching over me.” She squeezed Harriet’s knuckles and was blessed with a nod of acquiescence.

To Harriet’s flanks both Amelia and Persephone also signalled their consent. That left Charlotte, who stood holding her fan like a baton she meant to strike them with. She ticked Cora upon the arm with it. “My concern is that this is not a particularly fair wager. Certain of us are far more advantaged than others, and therefore better placed to win.” She shot a look at Amelia. “Given Mr. Hulme’s obvious attachment, Amelia is certain to triumph.”

Amelia flushed prettily and bowed her head, so that only the blonde crown which had been interwoven with blossoms could be seen. “I think you overstate my hand. Mr. Hulme is very kind, but I don’t believe he sees me in his life in such a permanent way. I’m sure it’s only that he feels a little sorry for me.”

Kind was not quite the word for it. Attentive was more accurate, perhaps even lecherous, if one were being unkind. Nevertheless, Cora echoed the pooh-poohs of the other women. “Wasn’t it Mr. Hulme’s influence with Lord Egremont that ensured your invitation?” Amelia had no family to speak of and only a modest living. “How are we supposed to interpret that other than as a sign of attachment?”

Amelia gave a delicate shrug. “I’m not the only one possessed of an admirer. Persephone held court to at least five beaux last night.”

“I did,” Persephone admitted, though not with any relish. Instead, her attention rested upon the portrait of their host upon the rear wall. Alas, Lord Egremont showed no reciprocal signs of affection. In fact, he was always noticeably absent from the coterie of bucks Persephone gathered.

“Do make sure not to forget Cora,” Biddy remarked to Charlotte. “Why, she and your brother are practically married already. One only has to perceive her skill at skittles to know how much time they’ve spent together, and hardly a minute of it properly chaperoned from what I’ve heard.”

Cora opened her mouth to make a retort, only for Persephone to step regally between her and Biddy. “I believe it’s your turn, Cora.”

Very well, she’d let that slight go, but only because it was in fact the truth. Tink—or more correctly—Branwell Locke had indeed taught her the art of skittles, alongside horsemanship, dice, archery, and trout tickling, to name but a few of her more unusual accomplishments. She excelled at them all, whereas her embroidery was mediocre and her singing voice akin to a caterwaul. “We’re nothing more than childhood friends,” she huffed under her breath. “More's the pity.”

Cora snatched up the skittles ball. She wasn’t sure when over the last few months things had changed so that Bran had stopped being her fond companion and transformed into an eligible gentleman. She supposed it coincided with her formal presentation into society. Maybe it was merely her perception that had changed.

She longed to be his wife.

He still tweaked her ringlets and ribbed her mercilessly about her sawing laugh. She longed to have him notice her in a different way.

When she gazed at Bran, her breath quickened and she imagined the taste of his merry lips pressed to hers delivering illicit kisses. She longed for the summer days they’d spent scrambling over hills and wading through brooks, and how they might live those days over as lovers if only he felt the same way.

She knew his smile and the mischievous light in his leaf green eyes. Knew too that he bore scars upon his arms from the punishments inflicted by one former schoolmaster and a lump upon his left shoulder from where he’d cracked a bone as a boy. Such insights she’d gleaned over years, but now she seemed cursed to gaze upon him from the near distance with little to no chance of ever being noticed there. Let alone winning any further intimacies.

Determined not to allow bitterness to overwhelm her good humour, Cora dashed forward a few steps, swung her arm back and released the wooden ball, which rolled fast and straight across the glossy floor. It smashed into the pins at the far end of the alley, sending them flying.

Grimly satisfied, Cora dusted her hands, before turning back to her friends and their incorrect suppositions. Only to be greeted instead with stunned applause. Both Charlotte and Persephone embraced her.

“I don’t suppose there is time to achieve such mastery in the time we have before the gentlemen join us,” remarked the latter.

“We can try,” Cora assured her encouragingly.

“Oh good, then I’ll take my turn next.” Persephone drifted down the room to straighten the pins. Cora drew her teeth over her lower lip. While she could produce a strike, Persephone would make skittles into an elegant art form, even if she never hit a thing. Her friend had always stood out. Her glossy chestnut ringlets made her intriguing among the mélange of demure blondes, and Bran had been one of the bucks paying court to her.

Persephone took her throw, using predictably beautiful steps, only for the ball to roll sluggishly and fail to topple a single pin.

“Use your wrist more,” Cora advised, not that she truly believed it would help.

Harriet’s attempt impressed little better. Cora stood back to allow Charlotte her throw, since she had also benefited from Bran’s past tuition. His sister toppled all but two pins, prompting her to clap in delight. It was only afterwards that Charlotte turned to her thoughtfully.

“Cora, forgive me, but I can’t help suspecting that this wager is a plan you’ve devised with my brother to cheat us of our things. I swear, if he suddenly makes a great show of wooing you, then—”

“He won’t. Well… I haven’t planned anything. How could you—”

“I never cheat. And Charlotte, we’re simply friends. You of all people are perfectly aware of that. Besides, even if Bran did propose, he would only do so in jest. He wouldn’t actually marry me.” Much as it hurt her to admit that fact. “I’m simply not to his tastes.”

“Is that so? I’ve always observed my brother to be particularly fond of you.”

Fond—perhaps! If only that were enough. “If I’m to spend my life with him, I shall want more than fondness.” She desired passion and love. She craved his actual touch. “I shall want to be central to his needs.”

Harriet tugged at her skirts. “Cora, you oughtn’t to dwell upon such improper thoughts. Think of what your mama would say if she heard you.”

Cora raked her teeth over her lower lip again. What was so wrong in her thinking of Bran, or any other man, in that way? Where was the evil in admitting her admiration? It seemed unlikely that the Lord God would strike her with a thunderbolt for admiring a fellow’s calves or the merry way in which his lips curled, or even for imagining him creeping towards her bed in the dark. After all, how else was procreation supposed to occur? She had grown up in the countryside and wasn’t naïve enough to believe in storks or bountiful gooseberry bushes.

If she occupied her nights dreaming of how Bran might touch her in places she’d explored once or twice for herself, then whose business was it besides her own?

More importantly, she absolutely insisted on feeling something deeper than passing interest in her future husband. She refused to be the sort of wife who was confined to the country estate so her husband could make merry with his mistress.

Why should her husband have need of a mistress? Could he not make merry with her?

“Whatever did I do?” Cora made her eyes wide in defence.

“It’s what you were thinking that was the problem. I could tell the turn of your thoughts purely from your expression.”

“Oh, and what pray were they?” Charlotte asked.

“Nothing I would consider repeating.”

Charlotte cocked an eyebrow in a way that reminded Cora sharply of Bran. “That simply makes it all the more intriguing.”

“It was nothing. I was merely considering an addendum to our wager. That it has to be a genuine match for the winner to be declared. Hopefully then you won’t consider my motivations so suspicious.”