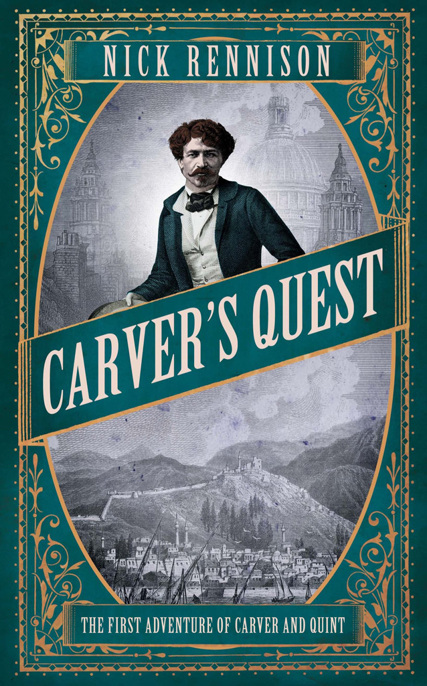 Nick Rennison is a writer, editor and bookseller. His books include
Sherlock Holmes: An Unauthorised Biography
,
Robin
Hood: Myth, History, Culture
,
The Bloomsbury Good Reading
Guide
and
100 Must-Read Historical Novels
. He is a regular reviewer of historical fiction for both
The Sunday Times
and
BBC
History Magazine
.

Published in trade paperback in Great Britain in 2013 by Corvus,
an imprint of Atlantic Books Ltd.

The moral right of Nicholas Rennison to be identified as the author of this work has been asserted by him in accordance with the Copyright, Designs and Patents Act of
1988.

All rights reserved. No part of this publication may be reproduced, stored in a retrieval system, or transmitted in any form or by any means, electronic, mechanical,
photocopying, recording, or otherwise, without the prior permission of both the copyright owner and the above publisher of this book.

This novel is entirely a work of fiction. The names, characters and incidents portrayed in it are the work of the author’s imagination. Any resemblance to actual
persons, living or dead, events or localities, is entirely coincidental.

To my sister Cindy

PART THREE: THESSALY AND BEYOND

C
rouched over the shallow bath of chemicals in his dark room, Adam Carver watched an image begin to appear on the photographic plate resting in it.
Slowly, out of the darkness, the ghostly outlines of buildings in a London street emerged. Walls and tiled roofs, silvery grey on the plate, swam into view through the liquid in the tray. Adam gave a
brief sigh of pleasure as the picture took shape. It was interrupted by a sudden irruption of light into the small room as the door was thrown open.

‘What is it, Quint? I’m busy. And shut that blasted door. The light will spoil the photograph.’

‘A lady would scarcely call on me here in Doughty Street, Quint. Not alone.’

‘Well, maybe she’s a lady, maybe she ain’t. But she’s here. She’s in the sitting room.’

Still bent over the photographic equipment, Adam looked over his shoulder. He watched impatiently as Quint closed the door of the dark room, returning it to its usual crepuscular gloom. He heard
Quint’s footsteps retreating along the passageway. Adam wondered who could possibly be waiting for him in the sitting room. No lady he knew would risk her reputation by visiting a single
gentleman in his rooms. And those few women of his acquaintance who were not ladies knew better than to come calling upon him at home. There was but one way to find out, of course. Whoever she was,
it was the height of impoliteness to leave her waiting alone.

However, Adam was annoyed to be disturbed. His work had been going so well. In the course of the morning, he had brought three views of London streets from the darkness into the light. If ever
he had cause to question what he was doing, a successful session in the dark room was enough to quell his doubts. He was recording the city for posterity, for a future that Londoners in this
thirty-third year of Victoria’s reign could not imagine. If Macaulay’s New Zealander, sitting on the broken arches of Westminster Bridge, were ever truly to gaze out over the ruins of
London, then he would have a guide to what had once been. Adam’s photographs and those of other pioneers he knew would survive to show the visitor what had been lost. Some friends –
Professor Fields for one – had chastised him for deserting archaeology and the classical world for this new pastime of photographing the city’s architecture but Adam knew he was, in his
own way, still serving the same end. He was assisting the archaeologists of the future. Had the technology existed in the past, what would Fields not give for photographs of Periclean Athens or the
Rome of the Caesars?

There was, though, no help for it. He would have to leave his labours and look to learn what this woman wanted. He took the plate from the bath and placed it carefully on the workbench, which
ran along one side of the room. He removed the long white frock coat he had taken to wearing to protect his everyday clothing from the chemicals he used, donned the jacket he had been wearing
earlier and exited the dark room.

Quint was loitering at the far end of the passageway where the door to the sitting room opened. He pointed a stubby forefinger through the door and mouthed, ‘In there,’ as if he
thought that Adam might have temporarily forgotten where his own sitting room was.

Adam walked through the door with Quint close on his heels. He was both delighted and disconcerted to find that the lady waiting there unchaperoned was a beautiful young woman. A very beautiful
young woman. Seated on the only chair in the room that was not covered with old newspapers and magazines, everything about her invited admiring attention. Her auburn hair, which looked
unfashionably natural, was long and lustrous and nearly hid the small pillbox hat that was perched in it. Her milky pale complexion clearly owed nothing to powder or cosmetics. Her greenish-blue
eyes danced and sparkled with life. Cosmo Jardine, the Pre-Raphaelite painter Adam had known since his schooldays in Shrewsbury, would have had no hesitation in describing her as ‘a
stunner’.

Faced by her charms, Adam was suddenly conscious of the bachelor disarray in which he lived, of the piles of books strewn around the room and the papers scattered everywhere. He drew his finger
through dust that was lying thickly on the table in the centre of the room. To his slight embarrassment, he noticed that his finger was stained with the chemicals he had just been using.

‘The place is filthy, Quint. I’m embarrassed that our visitor should see us amidst such squalor.’

Adam bowed slightly towards the woman as he spoke. She acknowledged him with an almost coquettish tilt of her head.

‘Well, I ain’t got neither the time nor the inclination to be prancing around with a feather duster,’ Quint said. ‘If you’re planning on getting finicky about a bit
of dirt, we’d best get a maid.’ With that, he turned and walked out of the room.

Adam looked again at the young woman, smiled and shrugged his shoulders. ‘Quint,’ he said, ‘is a temperamental soul. We were both members of an expedition to Macedonia in
sixty-seven. We sailed home from Salonika together and he has been with me ever since. I would call him my valet except that, as you see, he has few of the attributes usually associated with a
manservant.’ Adam smiled again. ‘Of course, I have few of the attributes usually associated with a master. So we are well matched.’

‘Mr Quint was politesse itself when he showed me to the room, Mr Carver. I can have no complaints on that score.’ The woman was perfectly self-possessed and seemed amused rather than
upset by the disorder surrounding her. ‘And I am not such a dainty housekeeper myself that I am likely to worry over a bit of dust. I have something to discuss with you important enough to
make a little domestic disorder seem a trifle in comparison.’

Her English was perfect but Adam noticed that she spoke with just the smallest hint of a foreign accent.

‘I am at a loss to know what this business might be, madam.’ Adam remained politely puzzled. ‘I might wish it were otherwise but I am obliged to confess that I have not had the
pleasure of meeting you until now.’

‘No, we have not met. But, nonetheless, I know something of you, Mr Carver.’

‘Indeed – and what is it that you know? Something that shows me to advantage, I trust?’

‘I know that your name is Adam Brunel Carver. That your father was Charles Carver, the railway baron.’

Adam started slightly at the mention of the name. Even now, more than four years after he had watched his father’s coffin being lowered into the ground at Kensal Green Cemetery, he
disliked reminders of the death. Did the woman, he wondered, know the circumstances in which Charles Carver had departed this world? He doubted it. So few people did. Two of his father’s
colleagues had made it their business to keep the details from gaining any wider circulation, and burial at Kensal Green would have been impossible had they not succeeded. But it was unlikely this
auburn-haired beauty knew anything of that. Indeed, Adam found it difficult to hazard a guess how she knew anything of the Carvers at all. Or why she had arrived at his rooms here in Doughty
Street.

‘I know that you were obliged to leave Cambridge when your father died,’ his visitor continued, ‘and that you travelled with Professor Burton Fields in European Turkey. And
with Mr Quint, it seems. That you published a book when you returned called
Travels in Ancient Macedon
which made you quite the literary lion.’

Adam had recovered his poise. He laughed. ‘The small celebrity I won when my book appeared has lasted little longer than the money the publisher paid me. If I were ever a lion, I have lost
my roar these last few months.’

‘There are still many people who admire your book very much.’

‘Yourself amongst them, I hope, Miss…?’ Adam left the question mark over his visitor’s name hanging in the air, but the attempt to discover her identity was
unsuccessful. She simply ignored it.

‘Indeed, I admire your book so much, Mr Carver, that I have put my reputation at risk of compromise by coming here to tell you so myself.’

‘I can assure you that no one will know of your visit save myself and Quint. Now, I am the soul of discretion and Quint can keep a secret even in his cups. So your reputation is as safe as
the gold in the Bank of England.’

‘I am grateful for your assurance, sir.’ The woman, sitting demurely amidst the chaos, spoke quietly and apparently seriously, but Adam could not help but notice a hint of
half-hidden irony in her voice. ‘I thought long and hard before I decided to visit you. I know that perhaps I should have left my card first or come with a chaperone. Or acted in almost any
way other than that in which I
have
acted. But I was
so
determined to see you.’

Adam was sensible of the suggestion of play-acting, even insincerity, in his visitor’s manner but it was not every day that a beautiful woman expressed determination to see him. He decided
that he was happy enough to ignore any doubts he might have about the reasons for her arrival on his doorstep.