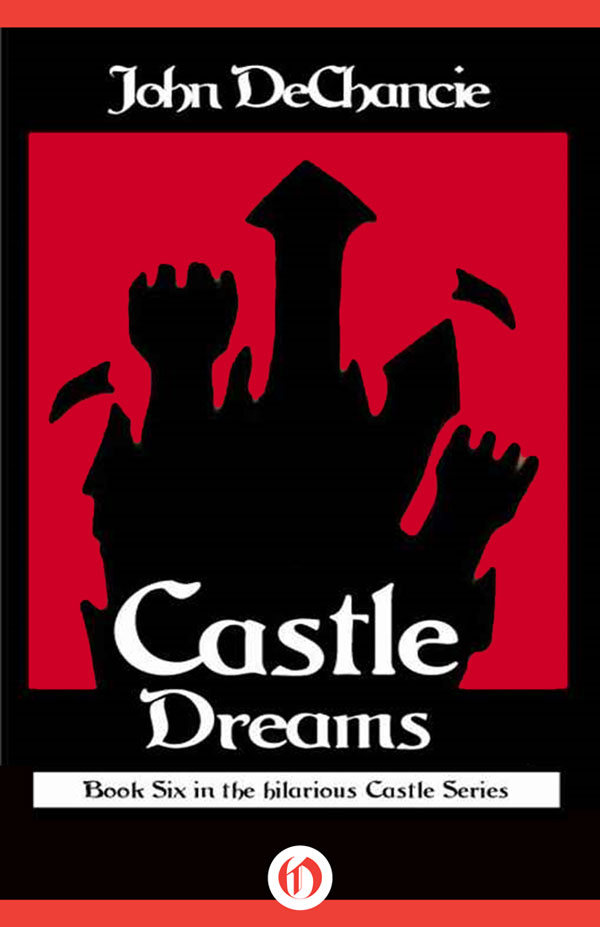 To my mother, Mrs. Gene DeChancie

Oh, tell me not in mournful numbers, Â
"Life is but an empty dream; Â
For the soul is dead that slumbers, Â
And things are not what they seem!" Â
Life is real! Life is earnest! Â
And the grave is not its goal: Â
"Dust thou art, to dust returnest," Â
Was not spoken of the soul. Â
Â  Â  Â  Â  Â
â Longfellow

Yet another Castle book!

Again the mystery, again the enigma of Castle Perilous, presented once more in a highly colorful tale of adventure, written by “John DeChancie,” the purported author of all the Castle romances, who, unless this investigator has completely botched the job of ferreting him out, does not exist in any known world, i.e. in any of the worlds accessible via the castle.

Readers of previous books in this series will by now need no introduction to the castle, its residents, or its mysteries. However, as series books are sometimes read out of sequence, perhaps a capsule summary of the complex setting in which these stories are laid will serve as a pocket travel guide, as it were, to the worldâand the myriad universesâof Castle Perilous.

Castle Perilous is a fortress atop a citadel bestriding the Plains of Baranthe, situated in a region known as the Western Pale, in a world bleak and drear. Nothing definite may be said of the castle's sizeâsave that it is vast; nor of its structureâsave that it beggars description. It is no ordinary castle. Its external aspects shift and slide and rearrange, as do its labyrinthine interior spaces. It is the ultimate maze, one sometimes as terrifyingly dangerous as it is confounding. But this indeterminate aspect of its nature is not the only peculiarity; for beyond almost every door and window, through almost every portal within the castle's tumultuous enclosures, lies another world. And through these portals come creatures of every descriptionâfanged and furred they come; scaled and scrofulous they slither forth; beings fantastic and
outrÃ©
, some more horrific than the phantoms haunting the sweatiest nightmare.

Not all are monsters; in point of fact most visitors are human; and, indeed, most of the nonhuman “Guests” are decent enough sorts, in sharp contradistinction to their terrifying appearance.

For all its bizarre nature, however, Castle Perilous is a proper castle, and even boasts a king. His name is Incarnadine, Lord of the Western Pale, and, by the grace of the gods, King of the Realms Perilous. If understatement can sometimes be more eloquent than hyperbole, and more convincing, let us say that he is something of a magician, drawing on the castle itself as the source of his thaumaturgical powers. A gracious host as well, he cherishes his Guests and makes them eternally welcome.

What is the castle, exactly, and why does it exist? That is a long story. The tales of Castle Perilous are as endless as the worlds it contains. Only a relative few of them have been set down....

...Which brings us up to this present volume.

This is the sixth installment of a work which bears the overarching title
The Eidolons of the King
, and, although past volumes have presented some problems regarding textual exegesis, this is the first book that, bids fairâif its numerous puzzles continue to resist critical explicationâto become that bane of scholars down through the ages: the apocryphal work.

For all of the castle adventures thus far have been based to some extent on truth. The tales told in preceding books were in fact true stories, so far as this castle scribe has been able to ascertain. Indeed, some of the castle's more harrowing events are forever etched in acid on the copperplate of my memory. But this is not the case with the “events” related in this particular castle book. No such happenings have been recorded in Perilous's annals. No such drama ever unfolded within its dark purlieus.

What, then, to make of this book? Is it simply a spurious work, written by some plagiarist with an eye toward a quick advance on royalties and sold to the hapless publisher, who might know the real authorâsay he is a reclusive crankâonly by correspondence? I think this unlikely. Yet I have no explanation for this volume's being different in style and content from the previous ones. Conundrums abound. What are we to make of its (if you will forgive the term) “postmodernist” touches: for instance, the chapters labeled “Spot Quiz No.ââ” and numbered accordingly? How to explain the spurious “footnotes,” most of which make no sense? Are these mere japes? Why is the vernacular used so extensively in the eschatological sections? Indeed, why is it that some of the questions in the “quizzes” have nothing to do with the text? These purported study exercises seem to be mockeries. We must conclude as much, for it is hard to credit the notion that this highly romantic bit of light entertainment was actually intended as a serious text for the study of literature. Diverting it may be; Art it certainly is not, despite its ham-handed pretensions.

Questions, questions. I, for one, harbor no hope that they will eventually be answered. For like the castle itself, the Castle series is an enigma. Of doubtful provenance, it provokes as much as it entertains. Analyze, explicate, and interpret as is your wont, but do all at your peril, for these books seem to justify the claims of the “deconstructionist” critics, who hold that, at bottom, any given text is not susceptible of reduction to any unambiguous meaning. In short: all texts are at once meaningful and meaningless, and there is no final sorting out of their uncertainties, for all the critical acumen we bring to bear on them. Like it or not, we must face the fact that there is an intrinsic uncertainty principle even in the humanistic field of belles-lettres.

All of the above notwithstanding, this is an entertaining book, like its predecessors. Setting aside its stylistic crudities, it reads well; the pace is quick, and we are compelled to turn its pages to see what happens next. We could do worse for our light reading fare....

I shall say no more about it. Here, then, is
Castle Dreams
, puzzling as it is, apocryphal though it may be. In the end, the question of its authenticity could be moot. For Castle Perilous contains not simply a multitude of worlds, but a multitude of
possible
worlds.

Who is to say that the events herein related did not happen in one of them? Certainly not I.

“Going to the toad-fling tomorrow?"

“I beg your pardon?"

Linda Barclay, pretty, blond, and blue-eyedâsorceress par excellence and general-utility magicianâlooked up from her bridge hand and regarded her partner, Gene Ferraro, with an expression of bemused hauteur. This reaction was something of a pose, a defensive posture, now almost automatic, against what she suspected was imminent more standard Ferraro wisecracking.

“Toad-fling,” Gene said, carefully aligning his cards as he studied them. “Good Will Turkey Shoot. World Cup Spitball Meet. Whatever they're calling it."

“You mean the All-Worlds Jousting Tournament?” asked Deena Williams, seated to Linda's left. Turning her dark head slightly, she directed her next remark to the strange creature sitting directly across from her: a large, white-furred beast, who happened to be her partner in this rubber. “Your call, Snowclaw."

“Snowclaw” was an understandable moniker in light of the creature's long, icy-white claws. Unwieldy as they appeared, they in no way inhibited the casually deft sorting by suit of a hand of bridge.

Snowclaw gave a sarcastic grunt. “Who dealt this mess?"

“You always complain,” Gene said. “Every hand. Which leads me to believe, you clever beast, that it's some kind of psychological stratagem."

“Some kind of what?” Snowclaw heaved a sigh. “Pass."

“Don't think you're putting anything over on anyone."

“Nonsense,” Gene said. “Your regulation flinging toad is bred for the job. They don't mind a bit. In fact, they live to be flung. It fulfills their purpose in life."

“The SPCA should hear about this,” Linda said. “I have half a mind to report it myself. Three spades."

“What's this toad-flingin' stuff, anyway?” Deena was curious to learn. “I thought it was knights on horses runnin' at each other with spears. Pass."

“Lances,” Gene corrected. “Well, I heard they've de-emphasized the traditional combat angle. Now it's mostly track-and-field. Sort of a medieval Olympicsâthough they do still hold the joust. And a contestant still stands a chance of getting his neck broken. Four no-trump."

“Or hers,” Linda said. “They have a woman's joust, too. Four no-trump, Gene? You sure are adventurous today. Remember, we're vulnerable."

Gene let out a breath. “It's been so damned boring around here lately. I crave excitement once in a while."

Snowclaw said, “I've been getting a little antsy myself, now that you mention it. Pass."

“Speaking of adventurism. Maybe you're
not
playing possum."

Snowclaw looked capable of handling any excitement that might come his way. A cross between a polar bear and a bipedal cat, he had fierce yellow eyes over a snoutful of wicked teeth. For all that, his disposition seemed amiable enough.

There were other castle Guests in the Gaming Hall. At one chess table, Cleve Dalton and Lord Peter Thaxton had locked horns in an especially desperate endgame. They sat unmoving, eyes on the board. In another corner, Melanie McDanielârusset-haired and freckle-facedâstrummed a guitar, singing some Scots ballad or another. She played well, but her alto voice squeaked in the upper registers. Nevertheless, five listeners sat around her in cross-legged appreciation.

“Oh, all right. It was actually penned by one of the immortal bards. A laureate among poets."

When no one obliged, Deena reluctantly asked, “Oh, yeah? Who?"

“No, really. It was during his Futurist period. Your call, Linda."

“One ace is all you have?” Snowclaw was amused.

“'Cept for the one up my sleeve, you stinker."

“Goin' for the slam,” Deena said. “You're right, Snowy. We gonna watch âem twist slowly in the wind. I pass."

“Gene, why don't you go off somewhere,” Linda said, “and get yourself into something? Take Snowy, go exploring. Pick a world, any world. After all, the castle has a hundred forty-four thousand of them."

Gene leaned back and scratched his left thigh, tugging at the stretchable material of his green tights. “Hell, we've done that. Just last week we hiked off into that aspect with the ruined temples in a sort of jungle setting. Know the one I mean?"

“I know of several,” Linda said.

“The ones that look vaguely like Angkor. Through the portal near the stairwell to the King's Tower."

“Oh, that one. Anything interesting?"

Gene shrugged. “Ruins. Jungle. Great for archaeologists. Otherwise, it was pretty boring, and the mosquitoes were as big as hang-gliders."

“After we came out of there,” Gene went on, “we tried a few more aspects. But they were washouts, too. Maybe we've explored all the interesting ones."