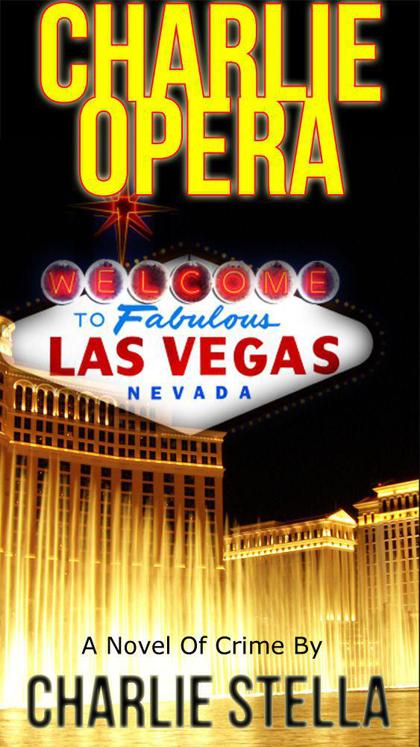 All rights reserved. No part of this book may be reproduced in whole or in part without written permission from Charlie Stella, except by reviewers who may quote brief excerpts in connections with a review in a newspaper, magazine or electronic publication.

“For his third brilliant crime novel, following Jimmy Bench-Press (2002)... Stella’s dialogue is electric and funny... This outing Stella offers us quite a few sympathetic characters, from Charlie and the cocktail waitress he’s falling for, to strong-arm men Francone and Lano. You actually feel sorry for the poor New York Mafioso, dropped in Las Vegas like sharks flipped into a pool of piranhas.”
– Publishers Weekly *Starred* Review

A Mystery Book of the Year 2003 Selection – Publishers Weekly

“Stella’s Goodfellas do their wild and crazy thing once more... the pace never slows, and you’ll like tough, tenderhearted Charlie a lot.”
– Kirkus Reviews

“Combine Mario Puzo and Elmore Leonard, add a dash of George V. Higgins and what do you get? Charlie Stella, that’s what. His flamboyant characters, violent action and picturesque dialogue place his work among the best of underworld thrillers, past and present.”
– San Diego Union Tribune

“Charlie Opera is The Man Who Knew Too Much on steroids and crank... Stella’s third novel builds like a strobe and neon lit pop-Opera as staged by Sam Peckinpah... Violent, funny and softened by a touching and unexpected romance, Charlie Opera hews to the pattern of Stella’s fine, first two novels, Eddie’s World and Jimmy Bench-Press...”
– Craig McDonald (ThisWeek)

“Where all the pieces will land in this raucous explosion of a tale is for the reader to discover. Suffice it to say that when it comes to throwing a group of characters together and spinning the wheel to see what happens, Stella knows exactly where he wants them all to go. The getting there is all the fun.”
– Peter Mergendahl (RockyMountainNews.com)

A Crime Factory (the Australian Crime Fiction Magazine) pick as one of the best crime reads of 2003.

“... a gritty novel that brings alive the underbelly of a seamy city. Fans of hard-boiled fiction in the tradition of George V. Higgins will want to seek out Stella’s latest novel.”
– Sarah Weinman (January Rap Sheet)

“In classic fashion, Charlie Stella’s story comes to a final conclusion with all the parties, including Charlie, his new found girlfriend, Cuccia and the rest of the NYC and Vegas Mafia, and even the police, either dead, in love, returned to their everyday dark lives or missing forever. What an opera, and what a story. Don’t miss this Aida of a thriller!”
– Paul Anik (iloveamysterynewsletter.com)

“A retired window-washer with a love of opera goes to Vegas on vacation and wakes up in a ditch behind a construction site. He soon finds himself mixed up with New York mobsters. Advance readers say Stella’s latest crime novel is fast, funny and brilliant from start to finish.”
– Steven Robert Allen (Alibi.com)

“There is a manic energy to Charlie Stella’s writing. Heir to much that’s best in the hard-boiled tradition — often compared to George V. Higgins and Elmore Leonard — Stella has a gift for tough humour, quick-fire dialogue and comic plotting. Using rapidly shifting points of view, Charlie Opera involves the reader with a motley crew of sharply delineated characters as they descend on Las Vegas, pursuing, surveilling, beating up, shooting and narrowly escaping one another.”
– Lee Horsley (CrimeCulture.com)

“Charlie Stella has written a fast-paced-high voltage story here... The hi-jinks of the Las Vegas hookers and the different factions of ethnic gangs is all too believable... The audience Stella was aiming for will love this book. It is right up there with the best.”
– C.J. Curry (Newmysteryreader.com)

“Talented Charlie Stella has created a cast of interesting characters who will definitely keep you reading... A fun read with a great setting and plotline. Recommended read for the mystery lover who likes the high life and excitement of Las Vegas and lots of action.”
– Ann K. Edwards (murderandmayhembookclub.com)

“This is a superb piece of writing that stands proudly alongside the crime fiction gods Stella is most often compared with, George V. Higgins and Elmore Leonard.”
– Allen Guthrie, author of Two Way Split

“... you have a book that brings to mind Elmore Leonard were he to write an episode of The Sopranos. With a pedigree like that, you can’t fail to have a good book on your hands... Stella’s greatest strength is his dialogue. His characters come across in sharp focus and their verbal sparring is entertaining, enlightening and utterly believable... Masterful, fun and highly recommended.”
– Crime Scene (Scotland)

“It was good, sonny. I couldn’t wait to finish it. But do you have to put all that dirty stuff in there like that? All that cursing... it was too much.”
– Momma Stella

Charlie Opera
is dedicated to my wife, Ann Marie.

Apples don’t fall far from their trees... and such is the case with Dave and Ross Gresham. Since Dave retired from teaching, I’ve been trying to give him a break (he’s put up with my writing attempts for 25 plus years now—it may well be what sent him and his wonderful wife, Linda, packing to live on a boat). Enter Ross... who was an innocent kid when I first met him (he wasn’t a Dallas Cowboys fan yet) and has since graduated from Harvard and earned an M.A. at the University of Southern Mississippi, married Jess Randall, a Columbia graduate, has taken a teaching position at the Air Force Academy at Colorado Springs, and has proved every bit as valuable as his dad to this writer. Luckily, Ross and Jess have a son of their own now (young William), so the Gresham-Randall line of genius continues. I sincerely thank Ross for his careful and insightful eye with
Charlie Opera
.

Others I need to acknowledge here are: my editor (and maestro), Peter Skutches; my heartbeat, Ann Marie (I fall more in love with you every day); my mother, Speranza (Hope) (for
always, always, always
being there); The Palm Too (the best steak joint in the world); my beloved New York State Buffalo Bills; the wonderful city of Las Vegas (heaven on earth); and, of course, our fierce (and never groomed like some puffy show dog) Bichon Frise,
Rigoletto
.

This town needs an enema.

Donna Bella,
a twenty-six-foot cabin cruiser, was anchored directly under the Marine Park Bridge in Jamaica Bay. An electronics technician had told the sixty-five-year-old underboss of the Vignieri crime family, Anthony Cuccia, that the bridge’s metal would help to jam any electronic surveillance.

The old man wasn’t taking chances. He let the boat’s engine idle to cover his conversation with his nephew.

“You’re flying to Vegas gonna solve this problem or make it worse?” he asked. “It’s something you should consider.”

It was a hot afternoon in mid-July. A stiff ocean breeze pulled at the umbrella shading the two men sitting on the back of the boat. The old man sucked on his twisted cigar, a DeNobli. He removed it to speak again.

“We got more important things to discuss than your personal vendetta with some mameluke broke your jaw,” he said. “This Russian thing, for instance, it needs to come to fruition.”

The nephew, Nicholas Cuccia, was forced to speak without moving his mouth from a broken jaw he had suffered the week before. He leaned forward and pointed at his chin.

“He’s gotta answer for this,” he whispered.

The old man frowned as he sipped club soda from a glass. He watched as a pair of jet skiers raced under the bridge about a hundred yards from
Donna Bella
. When the jet skiers were out of view, he turned to his nephew again.

“That’s gotta mend, your jaw,” he said. “What are you gonna do out there wired up like that? What’s the point?”

The nephew closed his eyes in frustration.

The nephew strained to speak. “I need a green light here,” he said. “I want this guy whacked.”

The old man stared into his nephew’s eyes.

“There are rules,” the nephew said. “Wiseguys don’t get touched. What’s it all about, we let a guy get away with this? Where does it stop? I had my jaw broken. I’m a skipper, for Christ sake.”

The old man leaned back in his chair as a warm breeze brushed against his face. “You shoulda thought of that before you grabbed that broad’s ass,” he said. He was down to the end of his cigar. He tossed it over the side of the boat.

The nephew said, “I’m going out there because I want him to know it’s me. I want him fucked up and then I want him dead. I want to be there when it happens.”

“Whatever. I want this guy to know it’s coming.”

The old man picked at a strand of tobacco stuck between his teeth. “That why you sent a couple guys from your crew out there?” he asked. “To stir up the shit? Make sure they leave a trail makes it easier for the law to come back to you?”

“They went out there to keep an eye on the guy. I gave them specific instructions.”

The old man waved it off. “You want to whack a guy for breaking your face, you should probably wait it out.”

“I’m not asking for permission here. It is what it is. The guy has to die.”

The old man lit a fresh cigar and let the moment pass. He watched the jet skiers returning in race formation under the bridge.

“Last week we saw two broads racing topless on those things,” he said. “They had their tops tied around their necks like scarves. They drove them things with their tits bouncing for whoever wanted to watch.”

The nephew sipped club soda through a straw.

“You ever hear of getting your tit in a ringer?” the old man asked. “Like them broads, they get pulled over by the Coast Guard or something. Or they take a spill, maybe lose a tit, a couple guys drinking on a boat chase them down. Or worse maybe.”