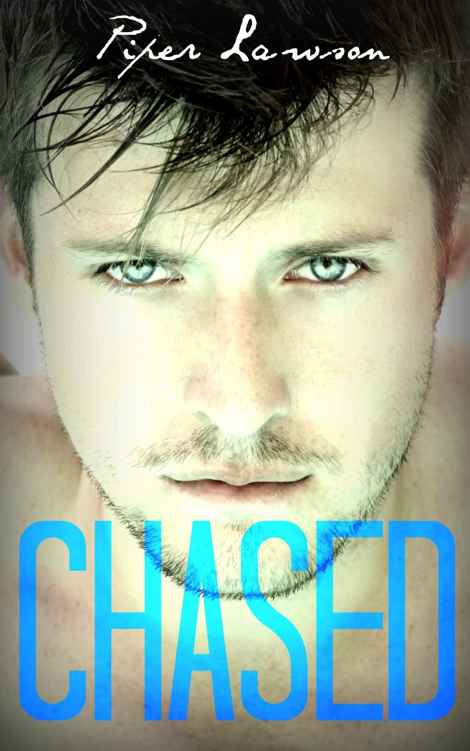 This book is a work of fiction. References to real people, events, establishments, organizations, or locations are either products of the author’s imagination or are used fictitiously. Any resemblance to actual events or persons, living or dead, is entirely coincidental.

No part of this book may be reproduced, scanned, or distributed in any printed or electronic form without permission.

A huge thank you to my beta readers Catherine, Heather, Poulami, Sophie and Suzanne, for flagging what you loved and what was ‘sort of weird’. I could not have done this without you.

And, to my favorite person in the world for indulging in an out-of-genre experience to make this happen.

Then the substanceless blue

Pour of tor and distances.

“There’s no fucking way you’re keeping me off the team.”

“There’s no fucking way you’re getting back on the team, Chase.” Coach Varis’ black eyes stare through me. Daring me to say something.

I push back from his desk, anger vibrating through my body. I went to see Coach today to talk, but it’s turning into an argument. Part of me knew it would. “You can’t keep me off. The donors won’t let you.”

“The donors?” Varis scoffs, gray eyebrows disappearing under his hat. “The donors don’t want you. You’re unreliable. You quit halfway through the season.”

“But I won every race until then.”

He leans back in his chair. “How can I know you’ll put the track team ahead of yourself?”

I swallow. There’s no good answer. “You have to trust me.”

“That worked out so well last year,” Varis comments dryly before looking past me. “Yes?”

I turn around. My hands are still clenched into fists at my sides.

She’s
there, hovering in the doorway.

The girl had been running with the team while I was waiting for Varis in the stands, trying to get his attention long enough to have the conversation we’re having now.

Her pale blond hair tucked into a ponytail is the color of straw. She’s flat chested, like most runners. Has a slim build, long legs. The girl’s wearing a purple t-shirt and black shorts with high-end shoes.

I checked her out, because I check most girls out. Pretty enough. Cool.

Not trendy, just halfway to cold.

“Coach, I’m sorry to interrupt,” she says. Her heart-shaped faced looks worried. “I wanted to talk to you about my spot on the team.”

“We’re done Chase,” he dismisses me.

“We’re not,” I say through a clenched jaw. I glare at the girl, then back at Varis. But there’s nothing I can do. “I’ll give you
five minutes
, then we’re finishing this.”

I storm for the door, stopping a few feet outside the small office.

“Ariel, I told you, your time’s too slow.” Their voices carry into the hall.

“But I need this, Coach,” she insists. “You don’t understand.”

Muffled voices for a minute.

It’s immediately clear he talks to her differently than he talks to me. Probably because she’s a girl. Or maybe her parents write big, fat cheques.

Money makes the world go round
.

“Chase, come back here.” Coach doesn’t bother raising his voice. Like he knew I was listening.

I walk in, eyeing them both warily.

“Work with Ariel for the next two weeks. Neither of you trains with the team. If Ariel can take a minute off the 10k she ran today, you both have a spot for the rest of the season.”

The girl’s watching me. “But Coach Varis—“ she starts.

Coach smiles grimly. “You want spots on the team? I’ll hold them. For both of you. Now get out of here before I change my mind.”

I head toward the hall, but slam a fist into the doorframe on the way. I don’t fuck around with rich girls who fuck around with track because running gives them great legs or whatever. Running’s what I do. It’s who I am.

I lean into the wall, breathing deep. I study the bricks, painted our college’s signature purple, for answers.

“This doesn’t seem like a good idea.” A soft voice beside me makes me turn.

“There’s no fucking way we’re training together,” I tell her. She winces when I say ‘fuck’. “Do you even know who I am?”

“And your name is seriously Ariel. Like the Disney princess.”

“Ariel Hastings. But people call me Ari,” she says.

“I don’t need to call you
anything
, because this isn’t going to happen.”

I turn and walk down the hallway and out into the sun. This is the last thing I need. My life’s a goddamn joke.

Then my mind makes a multitude of connections and the fear recedes.

I’m in my room at school, not at home.

My fingers feel for my phone under the edge of the bed.

“Yeah.” I answer as I roll back onto my back, heart still thudding.

“It’s noon. You gonna be here anytime soon, lad?” A thick Scottish accent as familiar as my own name comes over the line.

I drop the phone and take a deep breath. Still hot, crowded. The dreams I’d been surviving fade into the background. Where they’ll lie until I fall asleep tonight and they take shape again.

A hand reaches across my body, tickling the hair on my chest. Stroking. Stoking. I don’t need to look over to know she’s there. It’s Saturday. She’s always there, redhead and naked.

“Stay in bed.” Ashley pleads. She leans over me, presses her mouth against mine and her truly spectacular breasts into my chest. Her kiss tastes faintly like the vodka she mainlined a few hours before.

I roll over, figuring she’ll get the idea. Instead she wraps her arms around my back and curls into me. Ash drags a finger down the side of my abs in a way that’s calculated to entice me to fuck her again.

My dick twitches, cuz it’s easy like that. I weigh the merits of letting her ride me for the next eight minutes, feeling her squeeze around me while she moans and writhes, or getting on with what I have to do.

Decision made, I push Ash off and stand up, tugging on boxer briefs and a shirt before jerking open the bedroom door and walking down the hall and downstairs toward the kitchen.

She follows sleepily. “Chase. Are you gonna make me breakfast?”

She pouts. “We never spend time together. I want to feel like we have something in common.”

“We do. I have to leave in three minutes, and so do you.” I don’t glance back to see if my words made an impression. Last night was our usual. The game we always play. Ash came to my work, to get me to take her home. I fucked her in my truck, in the hall, and in my bed.

She’s pretty depraved and it’s what I want. The escape. The darkness.

Plus, she lets me put it anywhere I want.

When I make it to the fridge I jerk the door open and peruse its contents. A carton of apple juice keeps company with a half-eaten bowl of mac and cheese. I chug half the juice, ignoring the alarm bell in the back of my brain saying
this is not breakfast
.

Once I would’ve been more careful about my eating habits. Worried about macronutrients and timing relative to my workouts.

But then, I also would’ve been up before noon on a Saturday.

“Are you at least going to offer me some of that?” Ash asks as I set the carton on the counter.

Before I can answer, a sound in the kitchen makes us both turn.

“Looking good, Ash,” my roommate Spencer pipes up from the kitchen doorway. Judging by the way he’s dressed in jeans and a t-shirt, Spencer was already up. He’s taller than me, a few inches over six feet when I’m just under.

“You too, Spence,” she purrs. Then tilting her head, “you know, I always forget how much you two look alike.”

We could pass for brothers if you didn’t get too close. His short hair’s dirty blond while mine’s darker. But we have the same square jaw. Blue eyes.

“Yeah, except for one important difference,” he says, grinning. “My dick’s way bigger.”

Ash pats him on the shoulder. “I doubt that, sweetie.”

“Later, Spence,” I call, grabbing my keys off the hook and pressing Ash out ahead of me.

“Right.” I’d forgotten my roommate was going to visit family in Boston.

After dropping Ash off at her place, I pull up behind Tor’s bar in my beat-up truck. It’s on the edge of campus but it’s a bit of a dive. No one really knows how he stays in business, except that there are some devout regulars along with the transient students who pass through its doors.

Without checking the schedule on Tor’s desk I know I’m doing inventories and stock before bartending tonight.

The long shifts don’t bother me. They keep me busy. Out of trouble.

“You sounded like you drank turpentine when I called you. Wasn’t sure you’d show,” Tor comments as I let myself in the back door.

“Don’t I always?” I lower myself onto a crate in the store room and take the sheaf of papers and pen he’s offering. Tor’s old school and inventory involves a pencil. I think sometimes he does it to punish me.

Torin MacDermott is Scottish and in his sixties and bought the bar ages ago. Having immigrated in the seventies, he’s one of a handful of Scots who seemed to make it to California.

“You might want to lay off the drinking if you’re getting back into track.”

Tor stills, his eyes narrowing to show off age lines. But the look in them is sharp as anything. “Try harder, lad.”

“There’s nothing I can do. It’s Varis’ decision.”

Tor pulls himself up to his full height. “Daniel Chase Owens. If you want my support to stay in school – and that includes contributing to your tuition – you will
find
a way back on that team. And there’s no point hiding out here until you do. Go home and put your damn brain to use. God knows you have one.” He walks out of the room.

My jaw clenches. I need to be in school, or I’m going someplace worse. Tor knows it as well as I do.

There’s no point arguing with him. Especially when he calls me by my whole fucking name.