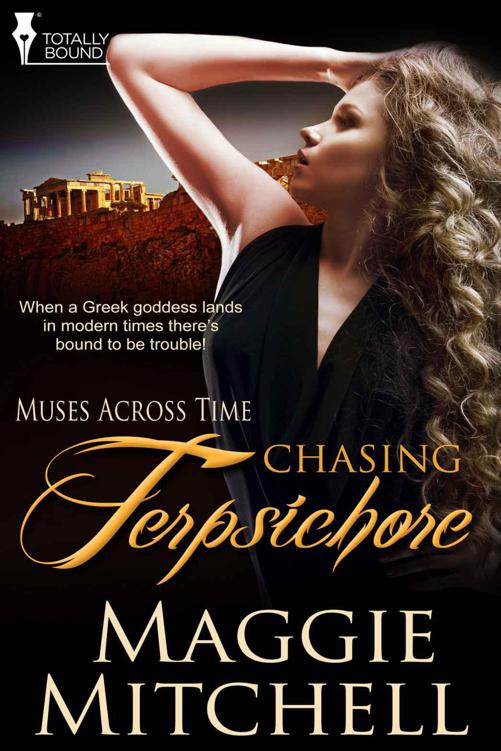 This book contains sexually explicit content which is only suitable for mature readers. This story has a
heat rating
of
Total-e-sizzling
and a
sexometer
of
1.

This story contains 86 pages, additionally there is also a
free excerpt
at the end of the book containing 9 pages.

Book one in the Muses Across Time series

When a Greek goddess lands in modern times there’s bound to be trouble.

Banished from her home in Olympus and trapped in modern day Australia, Terpsichore does her best to fit in, but when she is mistaken for a prostitute she needs the services of straight-laced solicitor James Barrington to help.

James Barrington is a man on a fast track to a stellar legal career. Being involved with a pole-dancing tango teacher is not part of the plan.

Together they fight a Titan rebel and undertake a journey through the Underworld but can they find each other on the way?

For everyone who helped me keep faith in this one. I love you all. You know who you are!

A shrouded figure stood alone in a secluded corner of the club. He scanned the area, looking from one side of the smoke-filled room to the other.

These mortals disgust me with their decadence, but perhaps they shall serve their purpose and assist me with my revenge.

A lone dancer stood upon a high platform, encased in a cage to prevent human contact. He watched in fascination as she danced, oblivious to his or anyone else’s presence. She moved with grace and elegance, her body the epitome of feminine perfection. She rubbed her hips against the cold metal surface, then wrapped her muscular leg around the central pole supporting her while she arched her back. She thrust her firm breasts high while she sighed with the pleasure of letting her inhibitions go. It was almost a shame to destroy all that beauty, but he couldn’t allow himself to feel guilt for taking her life away from her. After what Zeus had put him through, he would not rest until he had his revenge. He would make her suffering great, and thus punish Zeus in the most effective way possible—through his children.

His precious daughters will forever be trapped in the Underworld and I will have my revenge on the one who destroyed my life.

Oh, it feels so good!

It never failed to move her. The thrill she experienced every time she danced here at The Cave, Sydney’s premier dance club. She didn’t do it very often, but she loved it. It was the closest Corey got to the feeling of being home at Pieria, near Mount Olympus. Who would have thought that Terpsichore, the Muse of Dance, would be pole dancing in a fancy discotheque in Sydney? Certainly not Corey herself, although she had wished for the power to travel to other dimensions—little had she known that one day she would be doing just that. Except she had no idea how Hera had sent her here, or, more to the point, how to get home.

Oh the irony
. Once she’d looked down on those who served her but now she was one of the ones who served. Wouldn’t her family be shocked to know she worked for money, and, worse than that, she was a tango teaching pole dancer!

She giggled as she pictured the scene in her father’s court. Zeus had a pretty strong opinion on manual labour and working for payment—especially his progeny. Gods and goddesses should be served, not the other way around. He’d probably lock her up for a month if he found out—or worse.
If I ever find my way back home to Olympus, that is.

No point in worrying about that right now
, she thought as she took another ankle spin around the pole. She jumped when someone’s hand reached up from below her platform and grabbed her ankle through the bars of the cage. She scanned the crowd and found the culprit. A randy, twenty-something guy with a stupid grin was attempting to slide his palm higher up her calf.

She lifted her foot in an attempt to shake him off, but he dug in his fingers and gripped harder.
Great. Just great
. Even though The Cave was more of a retro sixties club, occasionally some overenthusiastic patron hoped for a bit more of a show—just her luck to have one of those idiots zero in on her tonight. Her irritation increased when her second attempt to dislodge him failed and his sweaty skin sent shivers of revulsion through her. A pounding started inside her head and her eyes flashed fire and light, aiming directly at her captive’s offending body part

Holy crap.
Did she just send a fireball at that boy? Her powers must finally be coming back.

But this probably wasn’t the time to rejoice because she prayed to the gods that she hadn’t hurt him. Annoying thing that he was, he was still an innocent mortal. Even as she’d thought it, she marvelled at how she’d changed. Back home she wouldn’t have given it a second thought.

Amazing what living with mortals can do for you
.

The young man released her leg instantly, as he fell down to the floor below. “Ow! What the f—?” He waved his hand back and forth, blowing on his fingers before dunking them in his glass of beer.

“She burned me, the bitch!”

One of his mates laughed and slapped him on the back. “How could she burn you, dude? All you did was touch her leg. She didn’t even move.”

He pulled his hand out of the glass and inspected it. Corey leaned over the cage to get a look. Nothing. No marks, no blisters, no redness and now, apparently, no pain.

“Shit, this is just too weird,” said the boy. “Let’s get the hell out of here. I’ve had enough of this place.”

Relieved to find that she hadn’t accidentally caused the boy harm, Corey watched the group leave and sighed. She’d either have to give up the pole-dancing gig, or have her cage elevated higher. She loved being at The Cave but she’d only agreed to dance here if she could be out of reach of the patrons. As much as she enjoyed the dancing, she didn’t want to be so close to the audience. Having strangers try to touch her wasn’t something she was willing to put up with. She shuddered to think of what might have happened if that incident had happened at home. If that young man had even touched her with a whisker in her homeland, her father would have executed him for daring to lay a finger on one of his offspring.

She hadn’t meant the young man any harm, but she hadn’t known her powers would decide to come back at that moment. Normally the mortal Corey wouldn’t have lost her temper, but she’d had a particularly crappy day so far. Her students had been extra trying and today would probably set a new world record for having her foot stamped on.

However, when she thought about it, of all the things she missed about home, she didn’t miss the brutal consequences. In fact life here among the mortals in Australia was actually pretty darn good. She danced away her days teaching at Terpsichore’s Tango school, and a couple of nights a month she indulged herself with pole dancing at The Cave.

Of course, her friends didn’t know about her real identity. She wasn’t stupid. They’d lock her away if she ever mentioned it. Not for one minute would they believe that she was Terpsichore, the Muse of Dance, goddess, and daughter of Zeus. Heck, from what she’d learned about society here in Sydney, she wouldn’t believe her either. To them she was just Corey, a

dance teacher, and that’s the way she wanted it to stay. Apart from her penchant for having fun, she was through with being the centre of attention, so being a slightly quirky dance teacher who was accepted at face value was just fine with her.

She stopped dancing, giggling to herself as she thought about it. It was probably true her friends thought of her as more than just a tad eccentric. More to the point, they probably thought she was a lot eccentric. She shrugged. It didn’t really matter anymore. Here she could get away with it. So what if her clothes always made a fashion statement and she liked to have fun as often as she could? Did it matter that she thought sleeping was overrated? She didn’t know how long she was going to be here so there was little time to get bogged down with seriousness when there was some fun to be had.

But it wasn’t all about the fun. There was something else about her that her friends didn’t know. This was probably the most surprising change she’d made since she’d arrived in this time. She’d started teaching underprivileged kids from the community centre and for the first time in her life she knew the joy of doing something for others and not expecting anything back. Who knew? She actually felt pretty darn good about it and if that made her eccentric, then so be it.

Her sister Calliope was always saying one never knew what was around the corner, and Corey was living proof of that. One minute she had been at home with her family and
poof
, she was trapped here in another time, another place and another dimension.

Hera had a lot to answer for, but Corey had to admit that she’d learned a lot about herself since she’d been here. When and if she did return home, her family would find her changed, and she sure as heck was going to show them just how much she’d missed them.

After unlocking her cage from the inside, Corey threw out the rope ladder and climbed down to the back of the platform. Her lungs closed in on her from the smoke haze as she reached the bottom rung. She’d had enough for tonight. Using her powers on that kid had surprised the heck out of her. She’d forgotten what it felt like and she wasn’t sure she even liked it now. At least he didn’t seem to be any worse for the experience. It was a solid reminder to her that she really needed to be less conspicuous. Being a goddess meant she had a perfect body shape that many men liked looking at and women seemed to envy. From now on she’d have to tone down her looks, especially if her powers were coming back. She didn’t need another accidental zap happening. Her powers did seem a bit rusty and she needed to take things slowly while she figured out how she could use them to get back home.