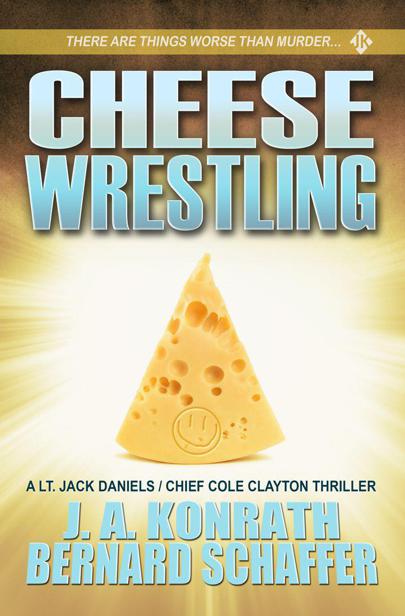 C
ole Clayton is a small town cop used to small town crime. But when a girl goes missing, it leads him from his small town to Chicago, where he teams up with a tough Homicide cop named Jack Daniels.

What is the meaning of cheese wrestling? Hint: You probably don’t want to know. And neither does Jack. But sometimes you have to deal with the worst of humanity to bring out the best in humanity.

There are things worse than murder…

W
hile the following story is fiction, cheese wrestling is, regrettably, true. Please don’t spoil it for other readers.

The authors offer their apologies on behalf of the human race.

S
he wants to stretch her legs out but she can’t for some reason.

Her mouth is dry, and she’s thirsty. Alice wants to ask for water, but when she opens her mouth, only monosyllabic nonsense comes out.

She blinks, sees a girl next to her. Remembers her from earlier, when they were taking pictures. Mandy or Sandy or something like that.

So hard to focus through the heroin high.

Alice closes her eyes and rides the wave.

L
et me get this—” Clayton started to say, then paused, forcing himself to keep from smiling. It wasn’t easy. He backed up in his seat and cleared his throat. After all, this was serious business. “Let me get this straight, now. Your name is Poop?”

The heavyset biker sitting handcuffed in front of him nodded, his expression solemn. Cole Clayton scratched his chin and nodded, then turned to look at the woman. She was paper-bag tan, and wrinkled like she’d been stuffed with newspapers and left outside in the sun to dry.

It might have been meth, except she didn’t have all the deep sores meth heads get from picking at themselves, trying to get the imaginary bugs off, and she still had her teeth. He looked at her arms and legs and didn’t see any track marks, which just meant she was shooting up in places he couldn’t see. Between her toes, maybe. The crotch? He’d seen crazier. A good heroin jones would suck the life out of you like hookworms and leave nothing behind but a crusty shell.

Clayton looked at her sallow face, sunken so deep he could see the ridges of her cheekbones. “How you doing, darling?”

“I’m all right.” Her voice was thick as cigarette smoke.

Clayton smiled gently and said, “And you’re officially the Property of Poop?”

Clayton gritted his teeth, dead-serious about not smiling. They were probably oblivious to him even if he did. Their denim cuts were draped across empty chairs in the office, cuts being the term for sleeveless vests bikers and their old ladies wore. Poop’s was as filthy as an outhouse, which was appropriate. You weren’t supposed to wash the thing. The top rocker was emblazoned in bright red letters that proclaimed the
Sin Serpents Motorcycle Club
, with a large circular patch in the center that showed a cartoonish snake baring its fangs and forked tongue.

Right under each snake were the words
Poop
and then
Property of Poop
.

Clayton looked back at the woman and said, “You must be mighty proud,” but he said it to her the way you might congratulate a mother when her daughter wins the Corn Queen Crown, and she took it that way, beaming for a moment. He had at least ten years on the woman, but her mileage far outdistanced his.

Even if there’s starting to be more white than gray in my goatee.

He glanced over the duo’s heads, at a yellow brick hanging on the wall in his office. It came from the FBI National Academy, and they didn’t just hand them out to everybody. You had to earn it with sweat, and Clayton had done so, going up against cops from all over the country and even some from other parts of the world, and then he’d come right back home to Potter County, Pennsylvania. Chief of a town with one traffic light.

That was all right, though, he figured. It gave him the chance to get to know regular folks like Poop and Mrs. Poop. She was wiggling her wrists inside her handcuffs, starting to get the shifts real bad. Dope sick. If he made them wait a little longer, they’d tell him anything he wanted to hear, as long as it meant getting out to score a little smack. If he made them wait too long, they’d start puking all over themselves, and then each other. Clayton’s office was already a bit disorganized, and he didn’t need to add that to the décor.

“That’s nice,” Clayton said. “How long you two been together?”

They looked at one another for a moment and Poop crunched up his nose in thought and said, “I guess about ten years or so?”

“Ten years?” Clayton said, letting out a whistle. “Impressive. You don’t hear about many people sticking together like that these days.”

Poop smiled, proud of his old lady, and he said, “Ever since she come into the club I had an eye for her. I said to Pig Hide, ‘I’ll give you five thousand dollars’ on the spot. It was all the money I had, but it was worth it, cause just like that, she was mine.”

Clayton grunted but caught the smile in time and said, “You paid five thousand dollars to another biker named Pig Hide for her?”

“Most amount any Sin Serpent ever paid for someone’s woman,” she added proudly.

“No kidding,” Clayton said. He bowed his head, showing admiration for her morphine-thin arms and straw hair and said, “Well, who couldn’t see why.”

She turned and looked at her old man, her skeletal face gentle toward him as she said, “And it was worth it for me too, cause he treats me good. He don’t whoop me or make me screw nobody else.”

“No?” Clayton said. “Well, that’s good. And nobody ever tried to buy her off you, Poop?”

“Oh, they tried,” Poop laughed. “All the time. I only sold her once though. Mushroom was busting my balls all night about being whipped an’ all that. I told him I wasn’t and to prove it I sold her to him for a few hundred dollars and a case of Busch.”

Property of Poop gave her man a sideways look that could melt glass.

Apparently it was a sore subject.

“A good girl like this? I bet you regretted it.”

Poop nodded and said, “It didn’t last long. By the end of the night I told Mushroom I wanted her back and he told me to go to hell, cause he ain’t porked her yet. So I told him, go ahead and take her in the bathroom and get it over with and I’ll take her back after that.”

Clayton leaned forward, finding himself fully invested in the story now. “So what happened then?”

“He took her in the bathroom and she was putting up a fuss. Cussin’ us both out cause she didn’t like Mushroom and he was getting rough on her. He started pulling her by the hair and all and as soon as that bathroom door closed, she commenced to hollerin’. I decided enough was enough and I went in to go get her.”