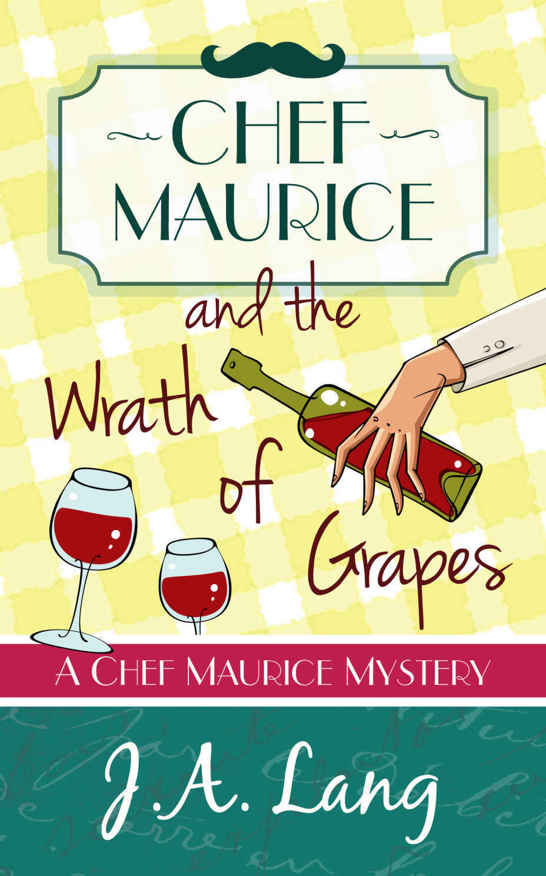 Chef Maurice and the Wrath of Grapes

In the rarefied world of wine collecting, murder isn’t exactly a barrel of laughs . . .

An invitation to dinner at the home of renowned wine collector Sir William Burton-Trent soon finds Chef Maurice in the middle of an all-too-real murder mystery party, when Sir William is found dead in his own wine cellar.

The guests are acting all innocent, but which one is only playing the part? The pushy Californian film director? The seductive French winemaker?

Or could it be, against all narrative decency, the butler who did it?

With the help of food critic friend Arthur Wordington-Smythe, a large kipper sandwich, and the newly formed Cochon Rouge Wine Appreciation Society, Chef Maurice must get to the bottom of matters before events turn decidedly sour . . .

Note to the Reader

British English is used throughout this book, which is set and published in the UK. Please note that some spelling, grammar and word usage will vary from US English.

Chef Maurice, head chef and owner of Le Cochon Rouge, the finest and only restaurant in the little Cotswold village of Beakley, currently found himself stuck between a rock and a hard place.

The rock in question was the smooth stone wall of the restaurant’s wine cellar, which was pressed up against his back and was, in the typical manner of many a solid stone wall, refusing to budge.

The hard place was a large bottle of vintage Champagne, which, as he’d squeezed his way past, had been dislodged from its slumbering position on the tall shelving unit opposite. Already on its side, the bottle had begun a gradual heart-stopping roll towards the edge of the shelf—a trajectory that would have spelt bubbly disaster if Chef Maurice hadn’t possessed the presence of mind to quickly stop it in its path.

Unfortunately, while he possessed the necessary presence of mind and quick-fire reactions honed by many decades in professional kitchens, he was currently experiencing a lack in the available hands department, as both his own were already engaged in clutching three bottles of wine apiece.

The height of the shelf, at eye level, had also discouraged the use of an enterprising knee or handy elbow.

So he’d used his nose.

It was a good nose, large and prominently placed, and supported by a moustache of walrus-like proportion.

Thus, man and bottle had reached a tentative equilibrium.

From the sounds above, dinner service was just wrapping up, the frantic buzz of the kitchen slowly descending into the gentle hum of leisurely dessert orders and postprandial coffees.

At some point in the not-so-distant future, someone was bound to notice the gaping hole left in the staffing, and come looking for him.

Hopefully, this would occur fairly soon, as the Champagne bottle was thick with dust from many years of storage, and he could feel a sneeze coming on any minute now.

Footsteps sounded at the top of the cellar stairs.

“Everything all right down there, chef? We’re all waiting for you to start.”

Patrick reached the bottom of the steps, conducted a speedy assessment of the situation, then, sighing, walked over and grabbed the dusty bottle, and set it back to its usual place.

“I did mention last week it’s getting a bit crowded down here,” he said, as Chef Maurice flicked the dust out of his moustache. “And it’s not just our inventory. I reckon we’re using at least a third of our shelves for storing customers’ own bottles for them. Maybe it’s time to consider charging a small f—”

“Bah! Our most loyal customers come here to eat because they know they can leave with us a special bottle or two, to enjoy at the correct moment. It is therefore our pleasure to host their wines.”

“
Oui
, chef. But maybe we should at least think about rearranging the shelving and—” Patrick stopped as he caught sight of the half-dozen wine bottles in Chef Maurice’s hands. “We’re drinking
all
of those tonight?”

“Tasting,” called a voice from the top of the cellar stairs. It was Arthur Wordington-Smythe—Chef Maurice’s best friend, sharp-nibbed food critic for the
England Observer
, and the somewhat reluctant Chair of the newly formed Cochon Rouge Wine Appreciation Society.

“It’s called a wine
tasting
for a reason,” Arthur reminded them. “Tonight is all about learning, not drinking.”

“Hmph,” said Chef Maurice, who had a deep suspicion of drinkers who spent more time swirling, sniffing and slurping than good old swallowing. “Wine is not to be learnt at a desk. It must be lived!”

“And, ideally, remembered the following morning,” said Arthur. “Anyway, Maurice, this tasting was your idea in the first place.”

That was true enough. Mandatory wine training for the restaurant’s staff had come about via an unfortunate incident involving a rather expensive bottle of Barolo. Chef Maurice, following a favoured customer’s request, had brought the bottle upstairs to the kitchens to sit upright for a few days, to give time for the wine’s grainy sediment to settle down into the base. Unfortunately, this had also given time for Alf, the restaurant’s young commis chef, to mistake the bottle for part of a sauce recipe, pull the cork and empty the contents into a hissing saucepan.

Everyone had agreed it was the best red wine jus they’d ever served with a herb-crusted rack of lamb, but probably not the most financially viable addition to the menu.

Alf had been close to tears, and Chef Maurice had been forced to surrender a fine old bottle of Burgundy from his personal collection to appease the bottle’s owner (who had, thankfully, been rather gracious about the whole matter, especially after tasting the superlative lamb).

Still, it at least presented an opportunity to instigate a few sessions of wine education, in the hope of decanting a little vinous knowledge into Le Cochon Rouge’s kitchen crew.

Patrick and Alf were already seated in the dining room at a square table covered in a forest of wine glasses. Dorothy, the restaurant’s long-time head waitress, was still bustling back and forth across the floor, tending to the evening’s remaining diners.

Arthur took his place at the head of the table, giving them all a solemn nod. “Evening, gentlemen. Thank you for your attendance at this inaugural meeting of the Cochon Rouge Wine Appreciation Society. Maurice has asked me to lead the proceedings, while he has prepared a selection of samples for the food-and-wine-matching portion of the evening.”

Chef Maurice nodded from his seat behind a wide tray, which held a pile of sliced tomatoes, a steamed sea bass, two pan-fried duck breasts, a tub of sardines in olive oil, a multitude of cheeses, and a large slice of chocolate cake.

He picked up the first bottle, encased in a dark cotton bag to obscure its label, and trickled a sample into each of their glasses.

“Anyone know where we start?”

“By drinking,” said Chef Maurice promptly, downing his glass and reaching for the bottle.

“No,” said Arthur, moving the bottle out of the chef’s reach. “Anyone else?”

“Almost. First, we begin with observation. You’ll notice a white napkin in front of you. Hold the glass up in front of it, tilting it like this, just so, and tell me what you think about the colour.”

“Indeed. And what type of yellow?”

“Weeellll . . . ” Alf scratched his ear. He was a gangly lad in his late teens, and had joined the team at Le Cochon Rouge in a bid to learn all about, as he put it, ‘haughty cuisine’. “Reminds me of the time we had too much asparagus in the kitchens, and chef let me take a whole bunch home for dinner, and later that night—”

“Yes, thank you, Alf, I think we see where you’re going with that,” said Arthur hurriedly, “but a simple description of ‘greenish-yellow’—”

“—more like yellow mixed with pea green, as in—”

“—would have sufficed at this stage.”

Alf looked over at Patrick, who shrugged.

“Next,” said Arthur, raising his glass to his nose, “we study the aroma. First
without
swirling”—he looked pointedly at Alf, who was whirling his glass around on the table like a fairground teacup ride—“then afterwards with swirling. We do this because aerating the wine by swirling the glass releases a whole new set of aromas.”

“Very good,” said Arthur, nodding encouragingly. “I get a distinct hint of lemon zest. Though, of course, wine is always a very personal experience.”

“That is very true,” said Chef Maurice, who was himself enjoying a personal experience with his third glass.

Alf, not to be outdone, took another deep sniff. “All I can smell is grapes,” he complained.

“Excellent!” said Arthur. “This grape variety is known to have a particular aroma of fresh grapes.”

“If that’s so, then my bet is on a nice fresh Muscadet,” boomed a voice from behind Arthur.

“
Non
,
non
, for you, this is too easy,” said Chef Maurice, turning to waggle a friendly finger at the newcomer. “They must learn for themselves. But come, join us. You have met my staff before,
n’est-ce pas
? Patrick, Alf, this is Sir William Burton-Trent. His home is the big house over the fields there.” He waved his glass in the general direction of the kitchens.

“You own Bourne Hall?” said Alf.

“That’s the one,” said Sir William. “It’s a grand old pile, though sadly getting on in years. As am I, though at least I haven’t quite reached my third century yet, even if a young chap like you might not believe it!”

“This man,” said Arthur, nodding at the towering Sir William, “has one of the finest private cellars in the whole of England.”

“And it’s full of wine too,” added Sir William with a hearty wink. “Rather too full, in my mind. But once you get on this collecting lark, I’m afraid drinking the stuff has to take a back seat sometimes.”

“That is not a problem I have found,” said Chef Maurice, slicing off a chunk of brie from the tray in front of him.

“Good man! Wine’s made to be drunk, keep telling myself that. But when you’re there at auction, and a pretty little half-case of Mouton comes up, straight from the chateau itself, well, you’ve got to be a stronger man than I to resist, I tell you.”

He clapped Chef Maurice on the back, causing the chef to drop his cheese.

“Speaking of Bordeaux,” continued Sir William, “I’m having a little party tomorrow evening, nothing fancy, just a dinner and tasting. Bordeaux versus California—my own take on the Judgement of Paris, you might say. If you and Arthur don’t have anything on, you’re more than welcome to stop by. And Meryl, of course,” he added, nodding at Arthur.

“I’m afraid she’s off at a conference, but I’m sure she’d have been delighted—”

“To hear us old bores go on about vintages and soil and minerality and all the rest of it, I’m sure,” said Sir William with a chuckle. “Righty-ho, I’d better let you get back to your tasting. Never forget,
in vino veritas
.”

His face took on a dark expression. “Hah, or so I thought . . . ” he muttered under his breath as he turned away.

“What was that he said?” asked Patrick, watching Sir William stride out of the front door.

“It’s Latin for ‘in wine there is truth’,” said Arthur.

“Is there truth in wine?” asked Alf, sniffing at his glass.

“
Oui
, the truth of a good drink!” Chef Maurice raised his glass in toast.

“And what was that he said about judging Paris?”

“The Judgement of Paris,” said Arthur, pouring out the next wine. “It was a competition between France and California in the 1970s to see who produced the world’s so-called best wines. The judges were all French and the wines were tasted blind, no labels. The Californians won, and the French went off with their noses in slings.”