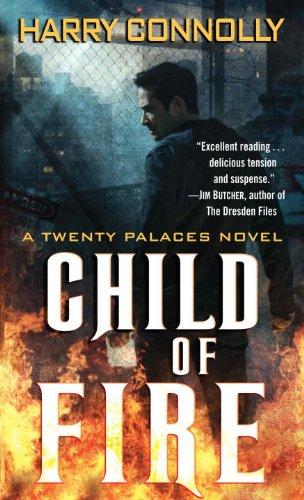 Praise for
CHILD OF FIRE
by Harry Connolly

“Redemption comes wrapped in a package of mystery and horror that hammers home the old saying ‘Don’t do the crime if you can’t do the time’ … and even then you’d better check the yellow pages for one bad-ass exterminator first.”

“A fine novel with some genuinely creepy moments. I enjoyed it immensely, and hope we’ll see more of Ray Lilly.”

“With an engaging protagonist, an unusual setting, fascinating magics, dark mysteries, and edge-of-your-seat action … everything you could want in a supernatural thriller. An exciting and original start to a great new series that will leave readers hungry for more.”

Books published by The Random House Publishing Group are available at quantity discounts on bulk purchases for premium, educational, fund-raising, and special sales use. For details, please call 1-800-733-3000.

It felt good to sit behind the wheel again, even the wheel of a battered Dodge Sprinter. Even with this passenger beside me.

The van rumbled like a garbage truck, handled like a refrigerator box, and needed a full minute to reach highway speeds. I’d driven better, but I’m a guy who has to take what I can get while I’m still alive to get it.

The passenger beside me was Annalise Powliss. She stood about five foot nothing, was as thin as a mop handle, and was covered with tattoos from the neck down. Her hair was the same dark red as the circled
F
’s I used to get on my book reports, and she wore it cropped close to her scalp. It was an ugly cut, but she never seemed to care how she looked. I suspected she cut it herself.

She was my boss, and she had been forbidden to kill me, although that’s what she most wanted to do.

“Where are we going?” I asked for the fourth time.

She didn’t answer. She wasn’t talking to me except to tell me where to drive. To be honest, I didn’t blame her. She had good reason to hate me.

At the moment, though, she and I had a job to do and all I knew about it was this: Annalise was on her way to kill someone. Maybe several someones. I was supposed to help.

Because she wouldn’t talk to me, I was not entirely clear who had ordered her not to kill me or why they would
bother. I was just the driver, and I didn’t even know where we were going.

“Quarter tank,” I said as we approached a gas station. I hated to drive on less than a half tank of gas, but so far the boss had refused to let me fill up. Since she had the money, the title, and the physical strength to tear my arm off, she made the decisions.

She glanced down at the scrap of wood in her hand—unpainted and unfinished except for the twisted nonsense shape made of several colors on one side—and said nothing. I stifled my irritation and drove past the pumps.

We were westbound somewhere on the Olympic Peninsula. There were no other cars on the road. The streets were slick with misting rain, and the sky was growing dark as evening approached. After my years in Southern California, I’d forgotten how long it could take for night to fall in this part of the world.

The road was one of those rural highways with one lane in each direction and a speed limit of fifty-five. I was staying below the limit because the van, with its balding tires, whining brakes, and load of equipment in the back, wasn’t equipped for the twists and turns of backwoods driving.

I was enjoying the drive anyway. I had a key to the door and I could see the sky. It felt good to be a free man again.

Up ahead, I saw a big cedar right up close to the road. Annalise was not wearing her seat belt. I was wearing mine. The speedometer on the Sprinter shuddered at the fifty-miles-per-hour mark. All I had to do was swerve. She and her little scrap of lumber would fly through the windshield and slam against the tree, while I would be safe in the arms of the shoulder harness and air bag.

I didn’t try it. It wasn’t just the motorcycle Annalise kept on flimsy mounts in the cargo area behind me. In truth, I doubted that slamming face-first into a tree trunk
would do more than muss her thrift-shop clothes. And piss her off. She’d survived worse. I’d seen it.

I was pretty sure Annalise wasn’t a human being. She had been, once, I thought, but I wasn’t sure what she was now.

A Volvo station wagon with luggage strapped to the roof drove eastbound toward us. As it passed, the painted scrap wood in Annalise’s hand flashed like a camera flashbulb. The design painted on the face of the wood began to twist like a nest full of snakes.

Annalise lunged toward me. “Turn around!” she yelled. She had a high, funny voice more suited to a cartoon squirrel than a grown woman. “Turn around and follow that station wagon!”

I was already doing it. I hit the brakes and twisted the wheel, letting the clumsy van fishtail as much as I dared. I heard crashing noises from behind me as Annalise’s things toppled over. We came to a rest, and I threw it in reverse.

“Keep your shirt on.”

I backed up onto the shoulder, swung the wheel all the way around, and stomped on the gas. We crept after the station wagon.

“Goddammit, Ray,” Annalise growled. She was very close to my ear, and I could hear the hate in her voice. “If you let them get away, I’m going to tear you apart.”

“Oh yeah? Who are you going to find who can reach the gas pedal?” I said. My voice betrayed too much fear. When Annalise threatened to tear someone apart, she meant it literally. “This is your broken-down van. If we don’t catch them, you can blame yourself for not buying better wheels.”

She settled back into her seat and glared through the windshield at the empty road ahead.

I forced myself to smile at her. “Isn’t this nice? Our
first job together and we’re getting along so well.” It was stupid and dangerous to taunt her, but I was afraid of her and I hated to show my fear.

She ignored me, for which I was secretly grateful.

We picked up speed, rounding curves and topping hills the van could barely handle. Night was coming and the forest around us was filling with shadows. I switched on the headlights, but Annalise snarled at me to turn them off.

A red light flashed from between the trees on the right. I slowed. Annalise started to protest, but I shushed her. She didn’t look pleased about that.

We came to a break in the forest—a gravel parking lot with a row of abandoned wooden stalls at the back. It looked like it had once been a roadside farmer’s stand. The station wagon was parked at the far end, red brake lights glowing.

I parked a couple of car lengths away from the vehicle and jumped from the van as quickly as I could. Annalise was a little faster. She walked toward them, holding the fist-sized scrap of wood in her hand like a Geiger counter. The design on it writhed wildly; something about the car or the people in it was setting it off.

All the wagon’s side doors stood open. A man and woman had their head and shoulders in the back doors, and they were working frantically at something. I checked their stuff. Among the things strapped to their roof was a vacuum cleaner in a clear plastic trash bag beaded with rain. These people weren’t on a camping trip. They were skipping town.

All I could see of the man was a pair of extra-wide Dockers and the pale skin that peeked above his sagging waistband.
Office worker
, I thought. He must have heard us approach, but he didn’t turn to look at us. Was he completely engrossed, or did he have a weak survival
instinct? Out of unshakable habit, my next thought was:
Victim
.

No, no. I pushed the thought away. That was not part of my life anymore.

From what I could see through the car windows, the woman was also wider than strictly necessary and also dressed for casual day at the office. They continued to struggle with something in the backseat.

I felt a pressure against my chest, just below my right collarbone. Strange. I tried to ignore it and said, “Do you folks need any help?”

The woman glanced up, noticing us for the first time. She had a terrified look on her face, but I knew it had nothing to do with Annalise or me. Her husband glanced back as he came out of the backseat. His glasses were smeary from the drizzle. “No,” he said too quickly. “We’re fine.”

The pressure against my chest increased.

Then their little boy climbed out of the car.

He was a good-looking kid, maybe eight or nine years old, although I’m no judge. His hair stuck up in the back, and he had scrapes on both elbows. “I feel funny, Dad,” he said. He laid his hands on his chest and pressed. “I feel squishy.”

Flames erupted around his head.

I felt light-headed suddenly, and the pressure against my chest vanished. Before I could think about it, I ran toward them, stripping off my jacket.

The woman screamed. The flames around the boy’s head spread downward past his crotch. In an instant, his whole body was ablaze.

The father fumbled for a jacket draped over the driver’s seat. I heard Annalise’s footsteps behind me.

The father lunged at his boy with the jacket, knocking him to the gravel, then beating at the flames. I got there a half second later and slapped my jacket over the boy’s face and head.

It was no good. The fire flared up and my jacket erupted in flames. I threw it aside and started to drag my shirt over my head.

The kid laughed as though we were tickling him. Then his skin turned silver-gray and his whole head came apart.

The flames roared. A wave of heat forced me back. The father rolled back onto his padded behind, almost bowling over his wife as she rushed around the car toward us.

I let my backward momentum roll me onto my feet. Annalise stood nearby. She had unbuttoned the fireman’s jacket she always wore, revealing colored ribbons alligator-clipped to her clothes. She pulled a green one free. The small sigil drawn on the bottom glowed with silvery light.

I turned back to the family. The boy’s head, arms, and chest had come apart and been transformed into a mass of fat, wriggling, silver-gray worms, each about the size of my pinkie. Then his stomach came apart, then his hips. It happened so fast I had no chance to think about it. I saw the worms twisting themselves against the packed gravel, trying to burrow into the earth. They swarmed over one another, heading west. Everything they touched turned black with scorched, greasy soot.