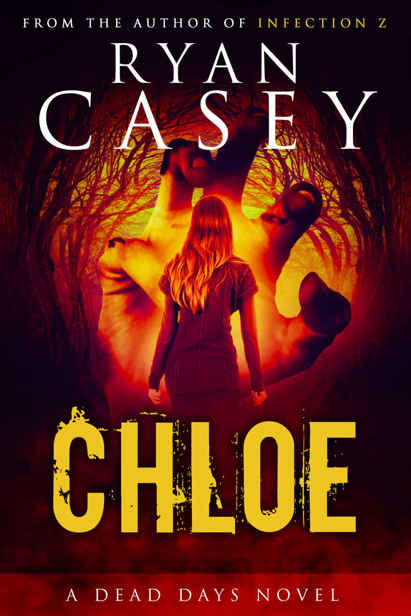 I
f you want
to be notified when Ryan Casey’s next novel is released and receive exclusive free books, please sign up to his Readers’ Group newsletter.

Y
our email address
will never be shared and you can unsubscribe at any time.

C
hloë
can be read
as a standalone story.

However, if you are reading the
Dead Days
series, the following reading order is highly recommended.

C
hloë
was written
as a standalone companion series to the hit post apocalyptic
Dead Days
books in order to satisfy an unwavering reader demand: to expand the Dead Days universe beyond the primary storyline.

I’d been considering writing a series within a series for a long, long time. Perhaps since the very first
Dead Days
books. I just didn’t want it to come across as spin-offy, or too derivative, or solely reliant on
Dead Days
in any way. It needed to work as a story in its own right, while bustling with the very essence of the
Dead Days
series’ success—complex characters, brutally unpredictable twists, and unputdownable levels of nailbiting suspense.

Oh, and zombies. Lots of zombies.

It took a while for me to realise that Chloë’s character—the “most badass girl in zombie fiction,” as one reviewer nicely claimed—lent itself perfectly to a series in its own right. Chloë is one of the most interesting and divisive characters in
Dead Days
, so a journey featuring her as the main character, coming of age in this harsh new world? I set to work on it.

You do not need to read the Dead Days series in order to enjoy Chloë.
Of course, you’ll get the richest experience if you do, as it is set after Season Five of
Dead Days
.

But
Chloë
is a series and a tale in its own right, and one which new readers and hardened fans alike can both relish.

So welcome aboard, or welcome back. Have fun. This is one zombie apocalypse I can resolutely state I would
not
like to be a part of.

H
arry Carter knew
something was wrong the second he smelled burning.

It was early afternoon. One damned hot day. Then again, the days always seemed hot now. Since the world collapsed, the summers grew warmer, the winters colder. Probably something to do with the grubbiness. Living out in the middle of a forest without access to any real showers wasn’t the most hygienic of setups. And sure, they bathed in a nearby river every now and then. But the last four times they’d been over that way, the river was just too surrounded by the dead to face stumbling into it.

Harry turned. Saw Carly standing by the entrance to the tent. She had short hair, chopped away to stop the dead getting hold of it, just like the rest of Harry’s group. She was wearing a black hoodie—the hood snipped off—and grey jogging bottoms. Harry could see right away that Carly had lost weight.

They’d all lost weight since the dead started walking.

Everyone, even the dead, had an unfillable hunger.

Harry nodded. He stepped further out of the tent. Looked around at the woods. Thick yew trees guarded their camp. And while it gave the group of six something of a security blanket, Harry couldn’t help but lament that it hindered visibility, too.

Wind brushed against the leaves. In the distance, the call of birdsong, oblivious and unaffected.

Footsteps cracking through the twigs on the forest floor.

Harry turned to Carly. Looked into her gem-like blue eyes. He wanted to know if she heard it too. Because if she did, they’d have to go out there. Leave the camp. Deal with the threat before it reached their home.

Because it wasn’t just the dead that posed a threat. It was the bandits, too.

“Guessing you heard that?” Harry whispered.

Carly squinted. A lump bobbed in her throat. She nodded, just the once. Behind her, the rest of the group emerged. Robb. Elliot. Patrick. Hailey. They sniffed at the air like dogs. Looked at Harry for approval. For him to decide.

Harry turned back to the trees. Tried to peek through them. He was used to the mantle of responsibility being handed to him by now. It’d been that way since the world collapsed nine months ago. Really, it was impossible to believe it’d only been nine months since the dead started walking. And in the case of a select few,
running
.

But one thing remained constant.

Harry had been their leader.

The one they looked to.

Footsteps cracked through the trees. The smell of burning grew stronger. Above, Harry swore he saw smoke.

“Should we check it out?” Elliot asked.

Harry listened to the rest of the group argue amongst themselves. Hopeless souls, really. He’d made tough decisions to keep them alive. He’d lied. Stolen. Killed. That was the way of the world now. Anyone pretending they had some kind of bullshit moral compass was just deluded.

This was a world where the dead were at the top of the food chain. Where children with intestines dangling from their bloated stomachs were the apex predators.

To pretend this world had any of its old morality remaining was a lie, pure and simple.

“Carly and I will check it out. The rest of you keep watch. Last thing we want is to lose the little we have.”

Harry heard a few grumbles from the rest of the group. He knew why. He heard the whisperings about Carly and him. About how he favoured her. In truth though, he did. Not just because she was attractive, but because she knew how to use a weapon. Knew how to swing a knife. Knew how to fire a gun—when the limited gold of ammunition happened to fall in their direction.

She was better than the others. That was just a fact.

And, yes. Okay. He fancied the fuck out of her.

He walked towards the trees. Carly followed. He gripped his 9mm automatic pistol in his right hand and a combat knife in his left. Not only was he ambidextrous—a handy advantage in a post-apocalyptic world—he’d learned to shoot when he was in his teens. Clay pigeon shooting, so learning how to fire a pistol was still a shock to the system.

That was something Carly had helped with. Something he’d allowed her to teach him.

If only the rest of the group were as good with a gun.

They waded away from their camp. Crunched through fallen twigs and leaves. “Sure it’s a good idea leaving those lot back there?” Carly asked.

Harry glanced at her. Then he looked back at the woods. Endless trees. The smell of burning somewhere ahead to the north. “Elliot’s okay with a gun.”

Harry knew what Carly was referring to. Elliot was a letch. He’d seen the look in Elliot’s eyes. Seen the way he looked at Hailey. “Patrick’ll keep him in check.”

“You sure about that?” Carly asked.

Harry looked at her. Smiled. “We’ve got to learn to trust them not to tear each other apart at some stage.”

Carly nodded. Looked back at the woods. Although the wind grew stronger, it seemed to drag the July heat right along with it. Harry’s mouth was dry. One thing he needed more than food was water. Their supplies were running low. They’d have to make a trip to the river some time soon.

Something that knotted his stomach.

“What we did,” Carly said. “Back at Lancaster. It’s … it’s something we need to talk about.”

Harry stopped. He didn’t mean to. But he’d been hoping Carly wouldn’t bring Lancaster up. It was an elephant in the room. Or a zombified elephant in the woods. “I’m not sure we do,” Harry said.

“And he was pointing a gun at you,” Harry said.

“He tried to fucking kill you.”

It was only when the birds flapped away that Harry realised he’d raised his voice. He stared into Carly’s eyes. And he saw something in them. Saw a fear.

No. She couldn’t fear him. The last thing he wanted was for her to fear him.

“I’m sorry,” Harry said, wiping the sweat from his forehead. “I didn’t mean to…”

“You saved me,” Carly said. “I’m grateful for that. But sometimes … sometimes I just wonder.”

Then she looked back at Harry. “Whether you’d do the same for Hailey. For Robb. For the others.”

Harry understood Carly’s insinuations. He understood them clearly. And the truth was, in the five months he’d spent travelling with Carly, he’d fallen in love with her.

Sure, he was a fat bastard. A little skinnier than he used to be, naturally, but still with a few layers.

Sure, she was out of his league.

But he loved her.

He wanted to protect her.

He opened his mouth to respond to Carly.

Then he saw the blood spurt out of her mouth.

And then he saw the figure.

Saw the figure in the black cloak running in the direction he’d come from.

Running through the trees.

He cradled Carly in his arms. He wanted to stay with her. But her struggling was slowing already. Her eyes were glazing over.

He had to get whoever had done this.

Had to make them pay.

He dropped Carly. Ran through the woods. Through the trees. Stepped on snapped branches, which pierced his already knackered New Balance trainers. Branches scratched at his cheeks.

But that didn’t matter.

All that mattered was this figure.

This figure in the black cloak who’d killed Carly.

This figure who was running back towards his camp.

He heard a cry.

A cry up ahead.

A cry from his camp.

He felt goosebumps creep up his skin.

He ran towards the camp. He wasn’t sure how long he’d been running. Only that he had to get back. He had to stop whatever was happening.

He had to get back and then he had to go back for Carly.

He ran until he saw the green outline of his tent.

Pushed through the last of the branches.

Stopped when he saw what was in the middle of the grass.

Elliot and Robb were dead. Camp was silent. There was no sign of Hailey, no sign of Patrick.

Three of the undead stuffed their teeth into Elliot’s and Robb’s bodies.

Stripped the skin from their flesh.

Dug their teeth into their intestines and sucked it all up like it was nothing more than pasta.

Flies buzzed around them. The stench of rot filled the camp.

He felt a pain.

He tried to struggle free but he fell to the forest floor.

A woman clung to his back.

Teeth ripping a chunk out of his shoulder.

In the distance, just outside his camp, he saw the figure in black.

Saw that its hood was pulled away, resting on its shoulders.

Saw the scarred face of a young girl.

A young girl, no older than a teenager.