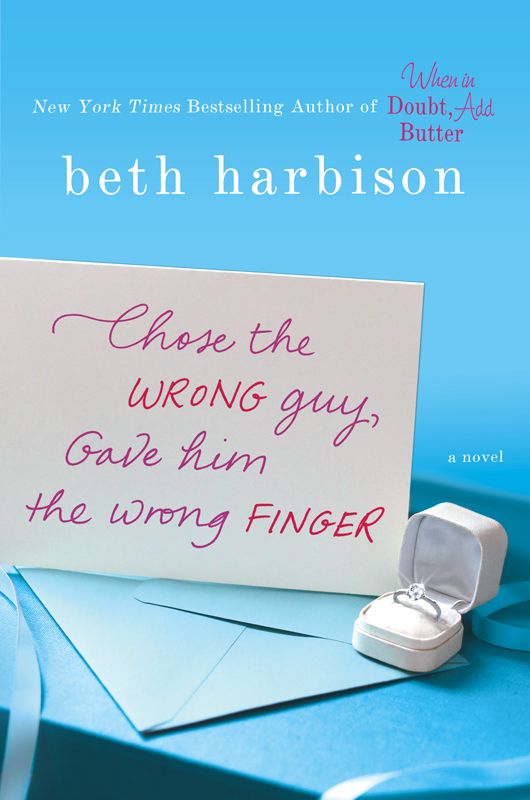 Happy birthday, Connie Atkins! Thanks for being the best Mommy ever!

Also, to Jack Harbison—I am more proud of you than you will ever know! I love you!

And John Harbison, thanks for the memories and the beautiful children. I will always remember you with love. Good-bye, old pal.

Thanks to Devynn Rae Grubby, for a million things. You are the coolest chick I know!

Jami Nasi, I don’t know what I’d have done without you. Here’s to many more happy trips to the Grotto, and the place with the apple dumplings, and nights on the porch with champagne and witchcraft.

Connie Jo Gernhofer and Stevie Brown, you have made my house look gorgeous and saved my sanity quite a few times in the process. However, our shopping trips are making me broke.

Annelise Robey, thank you for always going above and beyond, and for being such a great friend!

Jill Jacobs Stilwell, I want to be just like you someday.

Kate Farr Clark, you are an awesome neighbor and friend, and I’m so lucky to have you there. Thanks to Brian Clark as well, for occasionally weed-whacking my side too.

Thanks to Bob, Brenda, Bobby, and Kat Walsh for so much more than I could ever say here.

Jocelyn Friedrich, you were a good friend to a guy who needed that. Thank you.

Mimi Elias, there are no words. You are an amazing friend—I am so grateful.

Chandler Schwede, thanks for stepping up so many times and reassuring me you’re a few minutes away.

Jacquelyn and Elaine McShulskis, I am so lucky for sisters like you.

Thanks and hugs to Denise Whitaker, my long-lost cousin and friend—I have enjoyed our correspondence so much and look forward to meeting soon!

Dr. Michael J. Will, thank you for fixing those things so brilliantly.…

Greg Rubin, I hear you and I’m
trying!
Haha. You’ve been a godsend, seriously, I am so grateful.

Jordan Lyon, you crack me up. Russell Brand was a brilliant answer. You’re still getting points for that one.

Paige Harbison, there is too much to say to try to put it in one pithy comment. So I’ll just thank you for coming along, for being such an entertaining child, and for not getting arrested more than once.

Happy eighteenth birthday, Taylor Lyon! Here’s wishing you every happiness and dream come true (especially the flying one, which will never, ever not be funny!).

Bigosi, you’re still the big It. I think you always were, and I know you always will be. I love you.

There are five stages of heartbreak.

The first is Denial (He didn’t! He wouldn’t!), followed by Fear (What if he did? What will happen to me if I dump him?), a variable period of Rationalization (He didn’t even have
time
! I would
know
if he’d been with someone else!), and eventually Acceptance (Okay, he did it, I have to move on, he doesn’t deserve me).

Unfortunately, all too often these stages mix themselves up or repeat, repeat, repeat like a film on a loop, and sometimes another person gets thrown into the mix.

Once upon a time, that was what happened to Quinn Barton.

“Quinn, Frank’s at the door. He says he needs to talk to you. He says it’s urgent.”

Quinn Barton turned to her bridesmaid, Karen Ramsey, and lifted her veil, an act that was soon to seem very prophetic. “He needs to talk to me
now
?”

Something was wrong. Had something happened to Burke? Had he been hit by a car? Killed minutes before their wedding?

Heart pounding, Quinn pushed past Karen and hurried to the door, holding her skirt up enough so that she didn’t trip, but otherwise unconcerned about what she might knock over on her way past.

“What’s wrong?” she asked Frank as soon as she saw his face.

His eyes darted left and right. “I need to talk to you privately.”

“What?
No!
No one’s dead, there’s just something I need to tell you about.”

All of Quinn’s anxiety immediately melted into disproportionate irritation. “Really? Hm. I’d love to chat, but maybe now isn’t the best time. I’m about to get married.”

His expression hardened. “That’s exactly why it has to be now.”

Something about the way he said it, or maybe that granite set of his jaw, gave her pause. “Fine. We’ll go out the back door. There’s probably no one out there. I don’t want Burke to see me in my dress before the wedding, it’s bad luck.”

Frank made a derisive noise.

They stopped on the sidewalk a few yards outside the church and Frank said, “I think you need to consider stopping the wedding. Or at least postponing it.”

“You think I should stop the wedding now?” she asked, vaguely aware of a hint of feeling, deep inside, that she’d been waiting for something like this. Then, numb, afraid to hear the answer yet looking for it like a rubbernecker in traffic looks for severed limbs and decapitated heads at the scene of an accident even though those details could never be forgotten or less horrifying, she added, “Why?”

“Come on, Quinn, you
know
why. Surely you know why.”

“Because he’s
cheating
on you, that’s why!” Like she was stupid for asking. Like she already knew it, like
everyone
knew it, and he was just tired of watching her silly game.

She felt her hand go reflexively to her chest. What is that gesture? Why do people do it when they get a shock? To make sure they’re still alive, that there’s a heart beating under there, that they haven’t died and gone to hell?

Because this revelation certainly made Quinn feel like she was in hell. Quite suddenly and unexpectedly.

“He wouldn’t do that,” she went on. Her voice was small. Childlike. But that didn’t make him any gentler on her.

There was no compassion in his voice. “He would and he did.”

What kind of proof? If it existed, would she want to see it? Or would that just be the kind of thing that, once seen, could never be forgotten and would gnaw at her forever?

“I don’t believe it.” She swallowed and leveled her gaze on Frank. “When did this supposedly happen?”

“Are you kidding, Quinn? You know he did.
Repeatedly!
Probably different girls. Probably even last night. Definitely in the last month. Does that answer your question enough?”

Punched in the gut.

Except that was
exactly
how it felt—the unexpected blow connecting to the solar plexus, forcing the air from her lungs, tripping her heartbeat, curving her shoulders over in the time-immemorial position of,
Stop! I give up! I can’t take it!

In short, his words immobilized her. It was like crazy sci-fi technology in action—he said it and she was instantly frozen into complete inaction at the very moment the church bells began to ring their call
to
action.

It’s true
, her most fearful inner voice said.
You know it’s true
. But fear is such a liar, isn’t it? Always there for you, louder than anything else inside, always pretending to be on your side. It’s just looking out for you, right?

“When
exactly
?” she challenged, but she knew she wasn’t going to like the answer. This wasn’t fear she was talking to, or at least it wasn’t fear who was going to answer, this was a real-life person who would
know
. Her hands tingled and she balled them into and out of fists as she paced on the sidewalk in front of him.

Frank. Francis Albert Morrison. Named, by his mother, after Frank Sinatra, despite his distinctly English ancestry and complete lack of creative talent, musical or otherwise. He wasn’t a romantic either, or at least he’d never demonstrated anything resembling that in the six years she had known him. Why he was suddenly Dustin Hoffman yelling,
Elaine!
at her would-be wedding, she didn’t know.

Well, that wasn’t quite fair. He wasn’t yelling
Elaine!
He was yelling
Cheater!
Not
to
her but
at
her, and actually he wasn’t even yelling it so much as he was
condescending
it, and he was talking about someone who, right up to that moment, had been her fiancé.

Someone who, at that very moment, was waiting for her at the altar of the Middleburg United Methodist Church to become her husband.

Unless, of course, he was fucking her maid of honor behind the pulpit, which perhaps Frank would have her believe was equally likely.

Or which, god forbid,
was
equally likely.

“Give me the details.” Her knees went weak. She sank down onto the curb next to Frank and took off her wedding shoes. Her grandmother’s wedding shoes. Something old. It took some effort. Her feet were dented and grooved where the material of the slightly small shoes had cut into her flesh, which had swollen in the heat and stress.

Later she realized that “Give me the details” are some of the most ill-advised words anyone can ever utter. Details
never
make anything better.

“
Him?
” she raged. As if he could just go this far and let her handle the rest on her own?

“I wouldn’t do it to
you
either. Maybe even
mostly
you.” Like that made it better. “It’s none of my business at all, I’m just trying to help you before you make the biggest mistake of your life
.”

“
Then
help
me! You cannot make this implication
while I’m supposed to be walking down the aisle
and not tell me exactly what you’re talking about.”

He looked pained, it had to be said. A good actor, or just a guy with a conscience? She didn’t know. She realized, all in that one moment, that she’d
never
known. Because she’d actually always thought he was a good guy. Solid. Not one to whip up some sort of dangerous passion inside his soul and use it to potentially destroy someone else.

Convoy by Dudley Pope
After the Storm: Clean Historical Western Cowboy Romance Novel (Dawson Chronicles Book 2) by Linda Bridey
Dangerous Intentions by Lavelle, Dori
In the Hall of the Dragon King by Stephen Lawhead
Hunting Lust (Orion the Hunter Part Three) by Chase, J.D.
Fragile Beasts by Tawni O'Dell
Cut Cords of Attachment by Rose Rosetree
Playschool by Colin Thompson
Known to Evil by Walter Mosley
A Dance With the Devil: A True Story of Marriage to a Psychopath by Barbara Bentley