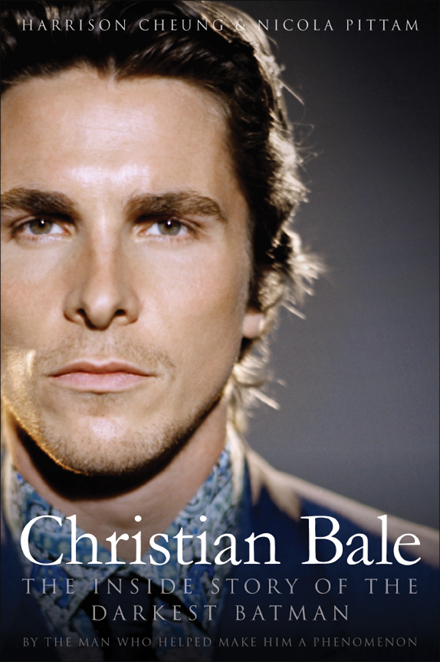 “When [Cheung] refers to himself as Bale's majordomo, he is not kidding.”

“This intimate and revealing biography of Christian Bale is full of details few people know about Hollywood's most-lauded Batman, and how a child actorâby harnessing his fans on the Internetâbecame the star he is today.”

“Harrison Cheung's groundbreaking work in Internet marketing during the mid-'90s established Christian Bale as the first major web celebrity, making my work as a journalist that much easier. Thanks to Harrison, many a major publication, including
USA TODAY
and the
Chicago Tribune
, took my profile pitches on this brilliant but largely unknown actorâbecause of his cyber-popularity.”

The Inside Story of

FOR DISRIBUTION IN THE UNITED STATES AND CANADA ONLY.

Library of Congress Cataloging-in-Publication Data is available for this title.

To place orders through Perseus Distribution:

1Â Â Empire of the Son

9Â Â Before Batman, There Was Bateman

11Â Â An Apple a Day Keeps the Doctor Away

12Â Â A Balance of Darkness and Light

14Â Â The Curse of BatmanâIt's No Joker

“The truth will set you free. But first, it'll piss you off.”

“We know very little about Christian Bale the man because he is intensely private. That is his right, and should be respected, within reason. After all, any serious movie actor who doesn't realize he's choosing the most public of careers when he signs on ought to have his head examined.”

H
ere's how it is. I'm always asked two questions about Christian Bale. One: What's he like? Two: How did I end up working for him for almost a decade?

Christian is one of the most secretive and talented stars in Hollywood with a reputation for an incredibly volatile temper and numerous eccentricities. Although pop psychologists can debate nature versus nurture, the fact remains that Christian is a former child actor with an unusual family upbringing and circumstance who grew into a man with a deep need for privacy. In many ways, he is also a man without a countryâan actor in Hollywood who's always reminded that he's Britishâthe first foreigner ever to play the iconically American role of Batman. These factors are just part of his development that would cultivate an explosive temper that would rival Mel Gibson's.

My involvement with Christian was initially a fan's dream. I'm delighted to tell the story of how I met Christian and got involved with his career because one of Christian's agents had warned me
never
to tell anyone. The agent thought our story would empower and encourage fans, and that was something he was absolutely against because like any good Hollywood player, he was loath to acknowledge any cultural influences aside from his own.

The influence of The Fan has always been underestimated, indeed scorned in the corner offices of the talent agencies. Why? The agents and the studios want to be the sole influencers of what you watch, rent, wear, and buy. However, when fan power is orchestrated, coordinated, and directed effectively, great things can happen.
Star Trek? Family Guy? Firefly
? Betty White's Facebook campaign to host
Saturday Night Live
? Justin Bieber's discovery on YouTube? There are so many examples of fan-power saving a series, influencing casting, and championing a book. So now you get the limos at Comic-Conâit's Hollywood's begrudging acknowledgment that fans matter.

I started off as a fan of Christian Bale's. I think there are different levels of fandom. You first notice an actor. Then you make a point of watching whatever movie that actor is in. Then there's a big shift to activismâyou want all your friends to watch him. You write a fan letter. You meet up with other fans to share experiences. But I managed to reach another level that few fans can achieve: I had the opportunity to directly influence Christian's career.

I ended up taking care of many aspects of Christian's lifeâas his assistant, publicist, and marketer. I read scripts, followed book projects, got him press coverage, handled his Internet marketing, and replied to his fan mail. I looked after his house and his pets when he was away on location. I took care of his father, his finances, his immigration issues. I had to laugh when people would describe me as the real-life Alfred to his Bruce Wayne.

Through Christian's ups and down, I saw a very talented person struggle to survive in the entertainment industry. Christian was the ultimate Hollywood outsiderâa former child actor who was pressured into show business by a determined single parent; a British teen reluctantly relocated to a new country, stuck with the burden of being a foreigner, and both a failed “Disney” and “Spielberg” kid. He dealt with soul-tearing family conflicts and betrayals and faced confidence-shattering discrimination and stereotyping. It's no wonder that he developed his ability into transforming himself physically for different roles. I could see that it was his way of coping, of running away from who he really was.

This book is Christian Bale's biography, but it's also the untold story of a child actor and how he became the Internet's first star. It's the true story of how a British actor got to play a quintessentially American antiheroâBatman. There is no other actor in Hollywood in recent times who owes so much to the contribution of his fans.

To the Baleheads, past and present, this book is dedicated to you and what we've collectively accomplished. I remember a certain Christian Bale movie poster and its tagline that empowered us all:

A Thousand Voices. A Single Dream
.

“The truth is this: if I didn't have to do a single interview, I never would.”

“Empire of the Sun
changed my life quite considerably and I didn't like it one bit.”

T
he thin boy was sitting quietly, staring intently at an orange he held in his left hand. Across the table sat a seasoned journalist with a tape recorder and a notepad, pen in hand, hoping to continue his interrogation.

Whenever the reporter asked him a question, the boy absently muttered a tired “yes” or “no” until his eyes wandered to the tray on the table covered with remnants of his lunch. He slowly fingered different pieces of cutlery, finally settling on a knife. As the reporter looked on, he began stabbing at the orange, reveling in the spritz of orange rind and the happy scent of citrus, which began to perfume the air. To the boy, this was something tangible
and realâsomething he could do and feel while he ignored any further questions.

Exasperated, the reporter got up and stormed out. This interview was over but the boy, still fixated on destroying his orange, savored the sticky wetness dribbling through his fingers.

A worried publicist ran into the room. “Christian, is everything all right?” she asked.

“Yes. I'd like to go to the bathroom,” he announced. Christian then stood up purposefully, wiping orange zest residue off his trousers. He silently walked past the woman and headed out the door and down the hallway.

The woman watched the retreating figure, concerned and troubled at the turn of events. A number of journalists had complained at how poorly their interviews had gone, and Christian's next interviewer was waiting patiently for his allotted appointment.