Read Christmas At Leo's - Memoirs Of A Houseboy Online

Christmas At Leo's - Memoirs Of A Houseboy 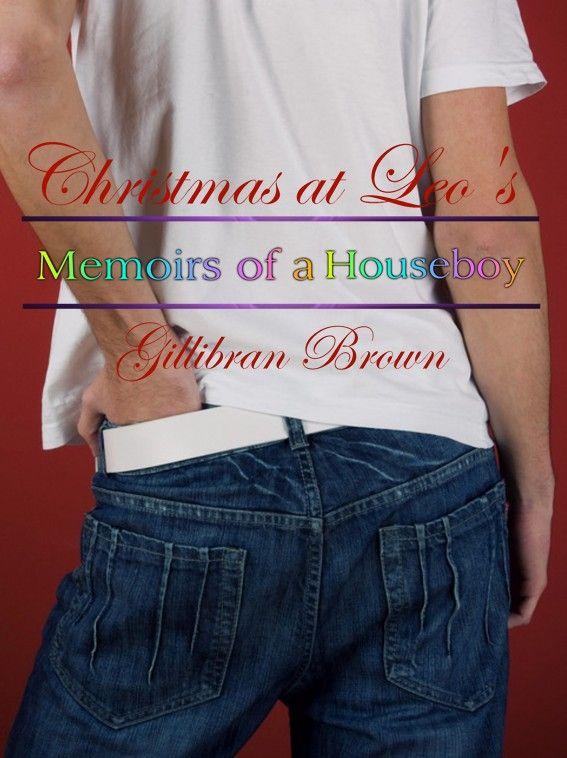 Memoirs of a Houseboy

This ebook is licensed for your personal enjoyment only. This ebook may not be re-sold or given away to other people. If you would like to share this book with another person, please purchase an additional copy for each person you share it with. If you’re reading this book and did not purchase it, or it was not purchased for your use only, then you should kindly purchase your own copy. Thank you for respecting the hard work of this author.

‘Christmas at Leo’s’ does exactly what it says on the cover. It tells the tale of Christmas at Leo’s. In essence, it’s a bridge between the end of ‘Gilliflowers Bonds of Affection’ and pending memoir ‘Revelations.’

Dedicated to houseboy fans everywhere (in double figures at the last count,
two
does count as a double figure, I believe.) Thank you for your patience.

The Christmas we spent at Leo’s place in 2008 was eventful, though not, you understand, in a Bruce Willis ‘Die Hard’ kind of way. There were no mass explosions, dramatic helicopter crashes or international mastermind terrorist criminals lurking around the Christmas tree. Dick and Shane didn’t don dirty vests and cavort barefoot over broken glass having a motherfucker shoot out with money-grubber baddies. By eventful I mean in a personal sense. There were events, small ones in the great scheme of things, but tough in their own way, for me anyway. So what happened I hear you ask, either that or the paranoid delusions
aren’t
and people really ARE whispering behind my back.

Excuse me while I have a poke around in my jeans and get something out, and no, it isn’t what you’re thinking. Get your minds out of the gutter. I’m groping in my pocket for my magic glitter. As you may recall from earlier trips down my memory lane, I’m trained and licensed in the art of time travel via the glitter method. This boy doesn’t need a cumbersome Tardis, so

Sprinkle-sprinkle. Glitter-glitter:
let us return to December 2008, the morning of the twenty-third to be precise, more or less where Gilliflowers left off. Magic fairy dust, eh! Never leave home without it.

I gazed around the kitchen with sullen hostility. There’s something sordid about the aftermath of a party. All the excitement and glamour has gone, tarnished by the debris of dirty glasses, soiled napkins and used plates. A stale smell of tobacco added another sleazy dimension to the jaded ambience. It had slunk into the kitchen the night before as a succession of smokers huddled outside the back door indulging their filthy habit in the cold garden. I scowled. No doubt there’d be a pile of unsightly dog ends to sweep up outside, despite me supplying lidded ashtrays. As if I didn’t have enough to do inside the house.

Unlocking the back door, I flung it open, letting in a blast of icy air, hoping it would chase the nicotine stink away and brighten my mood. It didn’t.

A thick frost enhanced the garden with a gauzy sparkling overlay. I noted it without pleasure. My humour was too sour to be sweetened by pretty nature.

All I wanted to do was go back to bed and sulk under the covers. It wasn’t an option. I’d had what amounted to a lie in, rising at eight instead of six, as was the norm on a workday. Dick had finished work for the holidays, but Shane was going into his office to tie up a few things before taking his Christmas break. If he had to be up for work, then so did I.

It was too cold to have the door open, so I closed it and opened a top window in the hope it would freshen the air without freezing my balls off at the same time. I began clearing the kitchen table ready for Shane’s breakfast, pondering on the day before.

I’d been fine to begin with. The day itself had gotten off to a good start. I’d woken up feeling motivated. I had everything planned like a military exercise. It was just a question of following my written lists and ticking the boxes as I went along. The main event was an early dinner party for an honoured group of five, followed by more casual drinks and nibbles for other of Dick and Shane’s work staff and acquaintances. Killing two festive obligations on one night so to speak.

The dinner guests were Reny and Angela along with Pamela, Shane’s terrifying personal secretary and the brave soul who had wed her. Julie, Reny and Dick’s secretary, completed the line up. I’ve met her a couple of times and rather like her. With us three the total number to cater for was eight.

Reny’s wife Angela, a woman worthy of her own set of Penny style cheerleader pom-poms and chant (B-I-T-C-H) threw a spanner in the works. She called mid afternoon to say her sister and bro in law had landed earlier than expected for Christmas and could we squeeze them in at the dinner table. It would be a shame to leave them home alone on their first night. She hadn’t seen them in an age and didn’t want to neglect them.

Given the choice, I’d have said no, fuck off! I wasn’t given the choice. Dick took the call and made the decision. The more the merrier. For him, maybe, but not for me, I’d planned a meal for eight and now I had to stretch it to ten. I’m not good at improvising. I had a bit of a fizz and stamp over it, accusing Dick of not taking my feelings into consideration. Shane took me to task for making a fuss, saying all I had to do was set another two places at the table. The meal I’d planned could easily stretch to ten. It was just a question of sharing out a bit of meat and veg. A roast beef dinner was hardly haute cuisine. Cue a mega huff. The houseboy felt obliged to put Master Shane straight about a few things. How dare, how very
dare,
he minimise my menu and write off my main course as a mere roast beef dinner. Excuse me!

For his information I was serving a prime, PRIME mind you, rib roast coated with herbs and spices. I’d scoured dozens of cookbooks and YouTube vids looking for the perfect recipe and tips on how to cook a hefty piece of cow carcass to perfection. Then there were the starters and puds to faff around with, and setting extra places would spoil my festive table arrangement. Plus, and it was a big plus, I’d only bought eight super expensive luxury Christmas crackers, one for each person. Eight. Not ten. Make a note, Shane, and highlight it. EIGHT!

Dick tried to pour oil, saying he’d nip out and buy another box of crackers. I put a flea in his ear as well. The crackers I’d bought had been ordered online to custom specifications and there was nothing in the shops to match them. I wasn’t having manky mass-produced crackers fucking up my liveried table decorations.

Rolling their eyes in synchronised exasperation the men folk said they would be more than happy to forego a cracker, thus freeing them up for the unexpected guests. As a gesture, it failed to placate this huffy houseboy. It wasn’t fair of Angela to invite uninvited guests at the eleventh hour. Cheeky mare! She was bad enough on her own without towing her fucking relatives along for a free feed and an expensive customised cracker containing one of a selection of tasteful gifts, plus a motto and foil hat.

Shane slapped a gagging order on my gob and a hand on my arse, telling me to stop chuntering and get on with it or so help him he was going to string my balls and hang them on the Christmas tree.

Dinner was scheduled to start at six and be over by seven-thirty, giving me time to clear the dining room and set out a buffet ready for the arrival of more plebeian guests from eight-thirty onwards. The study was designated as a dance hall. Dick and I had already rearranged the furniture and taken up the rugs to give plenty of floor space. I made it look more alluring and atmospheric by turning off the ceiling lights and illuminating the room with a mini set of party disco lights. It looked good. I also set out an eclectic array of CD’s for people to choose from. I did suggest we hire a DJ, but Shane suggested I get a grip on reality. Mean man. He has no sense of occasion.

Angela, Reny and Mr and Mrs Gatecrasher arrived almost fifteen minutes late for dinner, which put my nose even more out of joint. I was nervous enough as it was. Dinner parties are stressful, especially when you don’t know some of the guests particularly well and you’re responsible for the food. More time was lost in a melee of introductions and the handing out of champagne aperitifs in the lounge.

Angela’s sister Cheryl got my back up by referring to me as the ‘butler’ when I offered to take her coat. I smiled at her joke while mentally bludgeoning her to death with one of Dick’s golf clubs. I carefully hung her and her hubby’s coats on the cloakroom floor and booted them around before going into the kitchen to check on the beef. It was out of the oven and resting beneath a canopy of foil. It smelled delicious. The gravy was made and the vegetables were keeping warm. I’d slightly undercooked them so that the keeping warm process wouldn’t reduce them to mush. I’m a much more polished and savvy boy than the one who first landed on the quasi mansion’s doorstep. I couldn’t heat a pan of water without burning it in those days. My idea of culinary sophistication was to tip cold baked beans out of the tin and into a bowl before eating them.

I began to set out plates on which to serve my cold starter of smoked salmon and lobster terrine. I was a bit anxious about it, hoping it was set firm enough. I held my breath as I tipped the terrine out of its container onto a platter to slice. It didn’t dissolve into a pool of creamy sludge. Whew! I heaved a sigh of relief. Then I fretted about whether the side salad I was serving with it was crisp enough. There’s nothing worse than limp lettuce, unless it’s a limp dick. You don’t want either on the side of your plate.

What I really needed, and wanted, was a large glass of Dutch courage to bolster my confidence and help me relax, but it wasn’t an option. I did a few deep-breathing exercises to try and steady my nerves, but they were no substitute for a glass of sparkle or a few wet kisses from my banished lover, the smooth and cool Lady Stella of Artois.