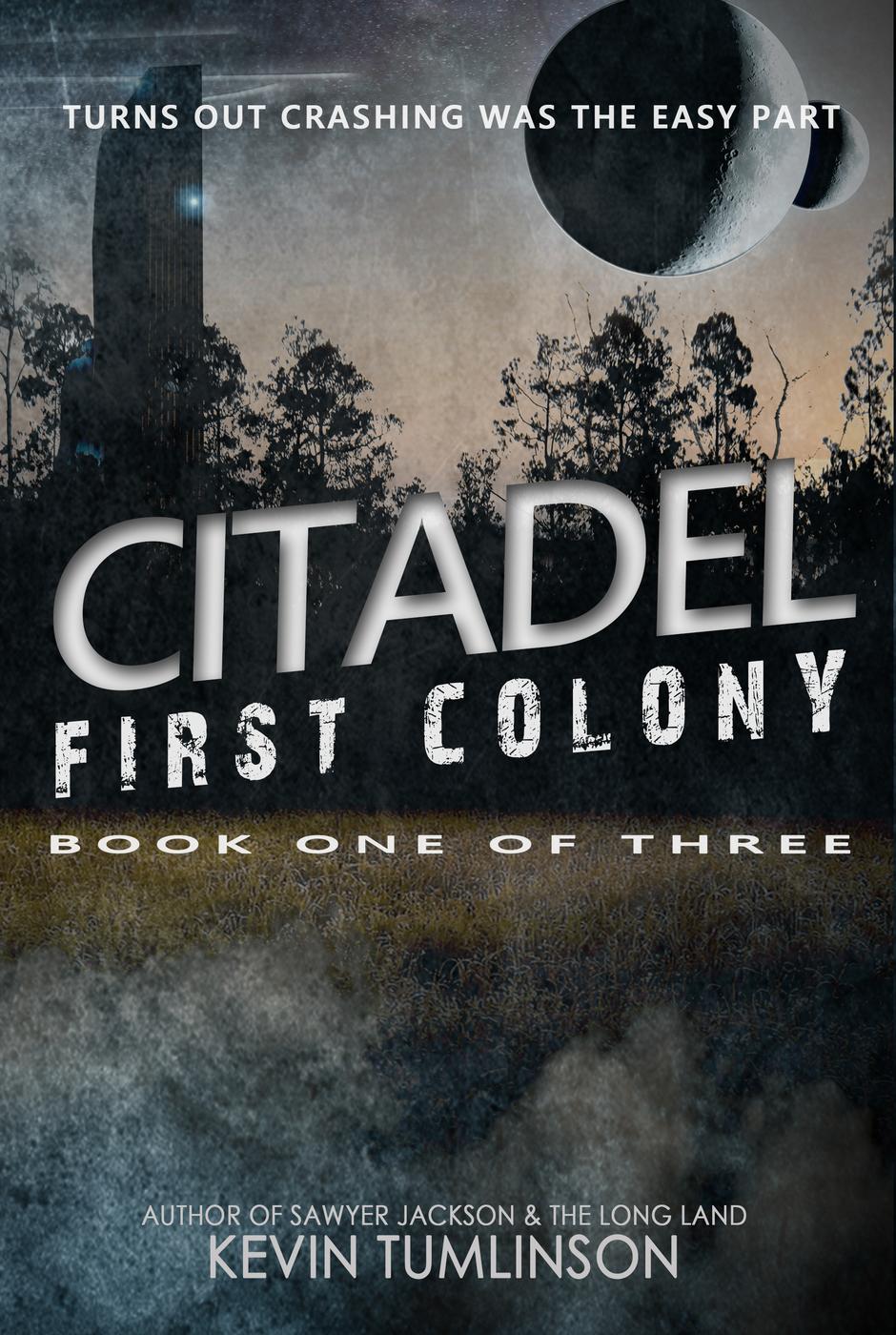 Book One of Citadel

BOOK ONE of Citadel

HAPPY PANTS BOOKS is a trademark of Kevin Tumlinson.
www.happypantsbooks.com

No part of this publication may be reproduced, stored in a retrieval system, or transmitted in any form or by any means, electronic, mechanical, photocopying, recording, or otherwise, without written permission of the publisher. For information regarding permissions, visit the contact form at
www.kevintumlinson.com/contact/
.

Citadel: The Value of War

Sawyer Jackson and the Long Land

Sawyer Jackson and the Shadow Strait

30-Day Author: Develop A Daily Writing Habit and Write Your Book In 30 Days (Or Less)

The Three Reasons to Avoid Being Punched in the Face

You believed, so I did too.

Want to get one of my best books for free? 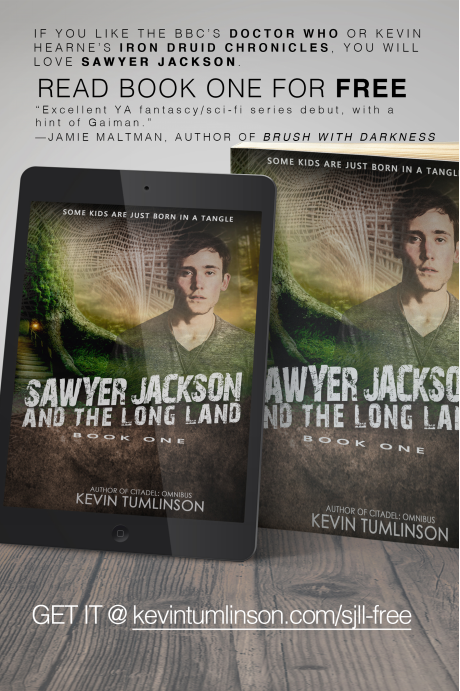 It was a pop of light, a burst of energy that left a little sizzle on the retinas. It was the return of light to eyes that had remained unfocused and non-functional for extreme weeks, months, even years at a time. Mitch Garrison had now experienced that flash enough times in his life that despite the fog of deep, vapor-induced sleep, his brain instantly put the pieces together. He was awake now. The long nap between shifts was over.

He tried to stretch but found himself confined.
Pod
, his gunk-filled brain reminded him. He blinked, which amounted to nothing but an instant of darkness punctuating the blurred light, and he managed to slide his hands up along the tight space to rub his underused eyes. Finally, slowly, things came into focus.

According to the readout just above his head, he’d only gone in a couple of months ago. He had another six months before his shift was to start.

The lid of the pod hissed, popped, and slid open. Mitch reached up and grabbed the lip of the opening, pulling himself up to a swooning but otherwise steady sitting position. The momentary grogginess of stasis was quickly replaced by sheer confusion as he looked around the Blue Collar pod bay.

The rest of his shift was awake and scrambling. A few, like himself, were just sitting up from their own stasis pods, peering out at the madness surrounding them with expressions of confusion, concern, and occasionally outright fear. Mitch heard shouting and looked to see First Commander Marcos standing in the doorway to the pod bay, barking orders at the Blue Collar crew. Unsteadily, on limbs that weren’t entirely ready to function, Mitch climbed out of the pod and stumbled to the pod bay floor.

“
Move! Move!
” Marcos was shouting. “We’ve got to get those White Collars awake and into the Citadel module,
now!
”

Citadel module. The
landing
module?
Mitch glanced at the time display again. They couldn’t be planet-side already. Could they?

He must have stood idle for too long. “Move it, Garrison, no time to screw around. We’re hitting atmo in 25 minutes!”

Atmo ... atmosphere?
Even with goo still dripping its way out of Mitch’s gray matter, he knew for certain that the colony ship wasn’t built to enter an atmosphere. So hitting atmo in 25 minutes meant only one thing.

They were about to crash.

Mitch shook his head, trying to jar his brain into gear, and grabbed his tool bag from the storage bin under the pod. He was thrown off balance. He had relied on these tools for most of his adult life, but they felt like dead weight as he slung the bag over his shoulder and took off at a run for the White Collar bay.

Captain
Alonzo ran an orderly ship.
He had to. Flight along the lightrail, at relativistic speeds, required mere mortals such as himself to sleep for long periods of time, along with a rotating chunk of the crew and every single non-essential passenger. If the order slipped, if chaos was allowed to take root, then the whole thing could spin out of control and everyone in his charge, including Alonzo himself, would be dead.

Alonzo barked orders and directives as the Blue Collar crew—most of them still sluggish and groggy from the sudden release from stasis—began waking the White Collars and getting everyone into the Citadel landing module. The orbital platform crew was in another part of the ship. They’d have to remain in stasis for now—there had been an issue with the automated systems, and Alonzo couldn’t spare anyone to go wake them up manually.

The protocol for a crash was to awaken ground crew and operations personnel. The colonists would be safer in sleep storage, where the padded and secured stasis pods would prevent injury from the jarring ride to come. If Alonzo could get the colony module clear of the rest of the ship, a pilot could guide her down by remote. Under normal circumstances, the colony module would be guided down from the bridge of the orbiting platform, while the Citadel module would have its own pilot at the helm. But normal circumstances had been abandoned when Alonzo found himself waking early to the jarring sound of warning claxons.

No time to dwell on it
, he thought.

Landing the colony module safely was one challenge, but the continued survival of the colonists hinged on getting support personnel to the ground as quickly as possible. Alonzo had taken the extra precaution of ordering his bridge crew into the Citadel module. Every man and woman would count once they were planet-side. But it meant he would be short-handed until he could awaken the Beta crew.
Why didn’t they awaken with the others?
he thought. He forced it out of his head, afraid that the answer would be less than helpful at best.

If the ship had been able to transition fully out of light speed, the computer systems, which became useless during faster-than-light travel, would have been functional, and the crew would have awoken automatically. That was the emergency protocol. However, the residual effect of the lightrail prevented the wireless and computer systems from functioning.

Protocol had screwed them.

How was he to know at the time? When the alarm sounded and he came out of cryo, all he knew for sure was that they were headed for the wrong planet. He did what any captain in the fleet would do. He tried to get them back on course—and protocol demanded that his first step was to maintain the connection to the lightrail, since losing it meant losing all of the lives on board to the vastness of space.

He had succeeded in keeping the lightrail going, but once that was done the ship’s systems wouldn’t let him alter course. Shifting the beam, even under the best of conditions, was both difficult and dangerous. This time, though, he’d found it was impossible. The computer systems were, of course, useless at light speed, but the mechanical systems should have worked with no trouble. Instead, no matter what he tried the beam pulled them along on the same course—toward the same planet. Only now, instead of gradually slowing from light speed, they were still heading for the planet at full tilt.

Once he had realized that their course couldn’t be altered, Alonzo began shutting down the rail. It was too late. Physics still applied, even at light speed, and the ship couldn’t finish decelerating before hitting the planet’s atmosphere. There was nothing left to do but awaken the rest of the crew and prepare for ... well, at this point it was anyone’s guess. There was one, slim chance for the colony, and that was an emergency atmospheric entry at sub-light speed.

Just because it had never been done before didn’t mean they wouldn’t survive, right?

The Captain had intended to brief Commander Marcos, his first officer. Alonzo planned to stay with the orbital platform, for good or ill, and that meant Marcos would be in command on the ground. But the planet was approaching fast, and there wasn’t time to explain anything. Marcos would just have to piece it together on his own, if he survived entry into the atmosphere.

Despite the protocols established by the Earth Colony Fleet, Alonzo had his own set of priorities. It was imperative that his crew get the White Collars awake and to safety. Even more than the colonists themselves, this colony depended on these few over-educated, occasionally arrogant scientists, engineers, and administrators. If the Citadel module was the nerve center of the colony, then these men and women were the organs and arteries, the parts that made the whole organism live. Funny how these intellectuals often toed the bitter line between the ship’s Blue Collar operations crew and the mostly affluent colonists. The White Collars belonged to neither group, and the penalty for that was to be snubbed by both. But Alonzo saw the White Collars as being very much like himself—both part of and separate from the rest of the crew. He felt a bit of empathy for them, despite the fact that for years—first as a Blue Collar navigator and then as a commander—he’d felt mostly contempt for the seemingly soft, overly intellectual group. Since then, all contempt had been laid aside, especially at this moment when everything might depend on any one person aboard.

Alonzo left the chaos of the evacuation behind and made his way quickly to the operations control center on the bridge. He moved deliberately, but not slowly. He had a duty to show his crew that despite all of the panic, he was calm and in charge. Any sign of panic or worry might be enough to throw off the whole operation, and too much was riding on this. Thousands of people could die today if Alonzo allowed even a second’s worry to cross his features.