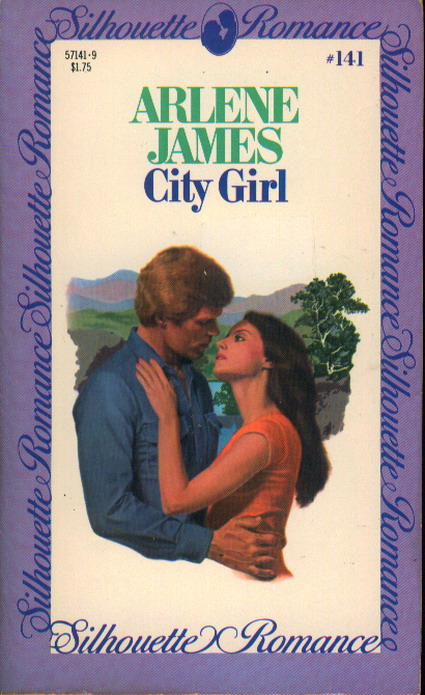 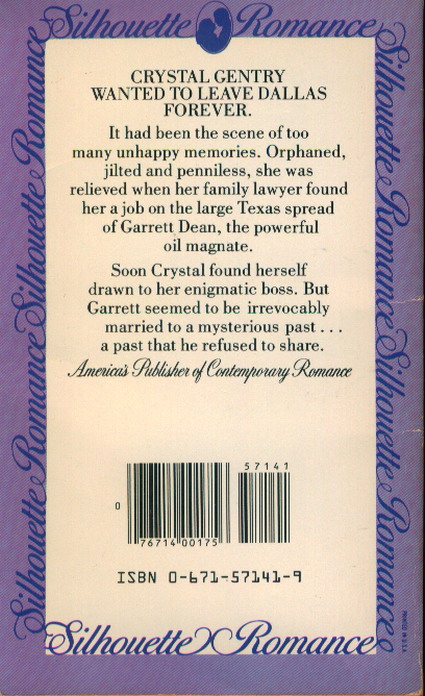 "LET ME GO!" SHE DEMANDED BREATHLESSLY.

His lips stopped their gentle caressing. His hand slid down from her body and the arm beneath her relaxed. "
Why
, Crystal? You don't really want me to. I've been as much on your mind as you have been on mine." He chuckled softly under his breath.

Anger flared in Crystal. She pressed her hands against his chest and pushed him away.

He lay on his back in the moonlight, hands tucked beneath his head. A slow, wicked smile played across his lips. "Well, you're certainly not the sophisticated, city girl you pretend to be," he drawled.

ARLENE JAMES grew up on a ranch in Oklahoma and has lived all over the South. In 1976 she married "the most romantic man in the world," and since then "every trip with him has been a romance to remember forever." We think you will feel the same way about her books.

Silhouette Romances is an exciting new publishing venture. We will be presenting the very finest writers of contemporary romantic fiction as well as outstanding new talent in this field. It is our hope that our stories, our heroes and our heroines will give you, the reader, all you want from romantic fiction.

Also,
you
play an important part in our future plans for Silhouette Romances. We welcome any suggestions or comments on our books and I invite you to write to us at the address below.

So, enjoy this book and all the wonderful romances from Silhouette. They're for
you
!

The armchair in Mr. Groman's law office was an overstuffed, wingbacked, burgundy leather affair. Crystal snuggled back into the corner of it and thought about the first time she had come to Mr. Groman's office with Aunt Judith. She had sat primly on the edge of this same big chair with her taffeta skirt spread out on the seat and her white patent-leather shoes dangling high above the black-and-gold Persian rug.

Mr. Groman had breezed into his office that day, apologized for being perpetually late, tugged playfully at the silky twin chocolate-brown ponytails that dangled from a straight part atop her head to her shoulders, and winked a large bespectacled eye at her. She liked him from that moment on, and though theirs was primarily a business relationship, she had always known that her welfare was uppermost in his dealings with her.

That knowledge made it doubly difficult for her to come here like this. She hated to ask that her late aunt's will be read and her small estate settled immediately, but it had been a month since dear old Aunt Judith had finally died of cancer after two long, excruciating years, and if Crystal was going to be able to leave town and make a new life for herself elsewhere, she had to have whatever money she could get. The money was, after all, hers to do with as she pleased. There could be no quarrel about that, since she was Aunt Judith's only living relative. If only she could make the lawyer understand how important it was that she move away from Dallas.

Crystal came impatiently to her feet and ambled about the opulent office. As far as she could tell, nothing at all had changed here in the past fourteen years. The oak-paneled walls and heavy furnishings still gave off that air of solid competency and quiet wealth. The gold ceiling-to-floor drapes hung open, affording an impressive glass-and-chrome-and-concrete view of downtown Dallas. The black marble top of the massive desk still gleamed with a mirror finish, its contents meticulously arranged upon it.

Nothing had changed here. Even Mr. Groman had remained remarkably the same. Only she had changed. That shy, pink-petticoated little girl of eight was no more. In her place stood a lovely, twenty-two-year-old, petite, doll-like woman, an image Crystal tried to dispel with her tastefully slim skirt and matching blazer of beige linen. Her long dark tresses coiled at the nape of her graceful neck in a thick figure-eight knot. She wore a white-and-beige scarf, its ends very properly tucked inside the deep V neck of her jacket. The three-inch heels of her white leather shoes added height to her diminutive frame, though it actually did little to make her appear taller. She reached barely five feet in her stockings, five feet and three inches in the tallest shoes she could find. Even with her shapely figure, she still managed to look like a big-eyed pixie unless she dressed carefully and executed her makeup with precision.

Crystal glanced at the plain gold watch at her tiny wrist. Mr. Groman, as usual, was late. Not that it irritated her, not at all. She perfectly understood how very busy he was. His services were very much in demand, and, being a magnanimous individual by nature, he found it difficult to deny his precious time to anyone. It was one of his most endearing qualities and probably a contributing factor to his baldness.

She smiled at that. Mr. Groman had the most naked face and head she had ever seen. There was not a hair upon his smooth pink dome, not an eyebrow or even a wisp of an eyelash to adorn his face, which was totally open, with oversized eyes and round cheeks, a diminutive nose and a pucker of a mouth that could widen itself to surprising proportions whenever he smiled, which was often.

In all the years since her parents had died in a car crash and she had gone to live with her maiden aunt, Mr. Groman had handled her finances. He had squeezed every available cent from her father's modest estate, allowing her and Aunt Judith to live comfortably in the family home, a rambling gable-roofed building between two huge oaks in what used to be one of the better neighborhoods of a circa 1920's Dallas. It had been Mr. Groman who arranged Crystal's college tuition year after year. And when Aunt Judith's medical bills began to pile up and the insurance coverage ran out, it was he who had stepped in and taken that burden from Crystal's shoulders. It was only logical that she turn to him now. In fact, there was nowhere else she could go.

It was not actually asking for the money which Crystal dreaded; it was having to explain herself. What could she tell him? The truth, that on Tuesday, three days away from graduation, she had suddenly decided not to take the teaching position she had been offered by the Dallas bilingual-education system? That she was determined to leave Dallas and make a new life for herself someplace where she would never have to see Jerry Chessman and his new bride?

Crystal sighed heavily and closed her eyes against an image of Jerry. She wanted very much to leave Jerry out of it. Pride simply would not allow her to reveal her foolishness to Mr. Groman. But how could she avoid it? Her engagement to Jerry had already been announced, and even if she volunteered no information whatsoever, Mr. Groman was bound to ask about her intended husband. What would she say then? "My darling fiancé threw me over for a more worldly woman."

Her pert valentine mouth drew together in a musing grimace as she gave silent vent to her anger. Once again, she renewed her decision in her heart. She would leave here. She must. If she stayed in Dallas, she would have to see Jerry and his wife far too often. It would be different if they had not chosen the same career, but she could not work in the Dallas bilingual-education program alongside him as if nothing had happened, as if he had not broken her heart.

Perhaps it had been their mutual love of languages that had brought them together. She could not say now why she had let herself fall in love with him. He was darkly handsome and oh, so terribly charming. He had courted her with an intensity that was both flattering and frightening. He had even won over Aunt Judith, whose chief opinion of romance was that it was for the birds, and that had been enough character reference for Crystal. If Aunt Judith liked him, he had to be all right.

A Million Miles Away by Avery,Lara
Concrete by Thomas Bernhard
Far From Innocent by Lorie O'Clare
The Guardians by John Christopher
A Year in Provence by Peter Mayle
The Swamp Warden by Unknown
Biker Chick Campout (Rebel Wayfarers MC) by Marialisa Demora
FatedMates by Marie Rose Dufour
Jailbreak! by Bindi Irwin
A Cursed Bloodline (WG 4) by Cecy Robson