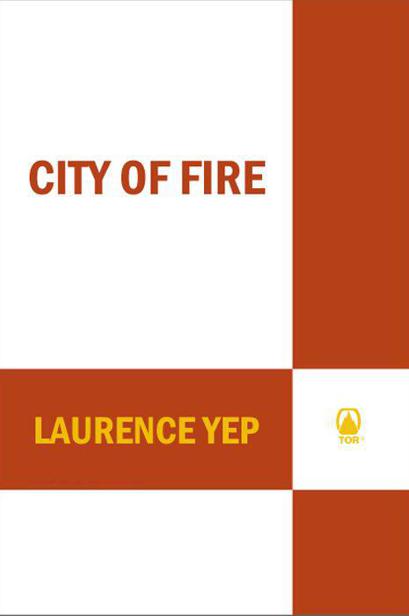 Child of the Owl
City of Ice

City of the Dead 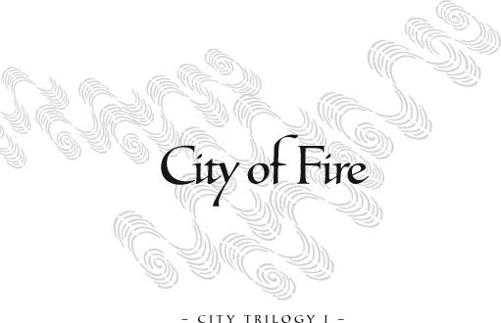 Yep, Laurence, 1948–
City of fire / Laurence Yep. — 1st ed.
p. cm.
“A Starscape book.”
Summary: Twelve-year-old Scirye and her companions travel to Houlani, a new Hawaiian island created by magic, where they enlist the help of volcano goddess Pele in an attempt to stop an evil dragon and a mysterious man from altering the universe.
ISBN 978-0-7653-1924-1
[1. Fantasy.  2. Magic—Fiction.  3. Dragons—Fiction.  4. Hawaii—Fiction 5.  Pele (Hawaiian deity)—Fiction.]  I. Title.

Printed in August 2009 in the United States of America
by R. R. Donnelley, Harrisonburg, Virginia

To Ray, who’s setting out on his own great adventure

Guide to Pronunciation
of Kushan Names

Her prey was only ten feet away now.

The boy called Leech had a shock of brown hair but the fold at the corner of his eyes suggested some Asian blood. He was small for his twelve years, but that was probably from lack of proper nourishment since he had grown up on the vicious streets and alleys of San Francisco. He was quick but not particularly strong. Nor did he seem aware of his powers yet. But she knew better than to be deceived. Beneath the childish exterior beat the heart of a cold-blooded killer who had to be stopped before his special abilities could turn him into a monster.

His chubby friend, Koko, presented only a slight difficulty. Oh, Koko looked harmless enough with his pear-shaped body and plump cheeks, but he carried a faint whiff of magic—though not enough to threaten Bayang.

It should have been easy to kill Leech, but he had acquired a bodyguard, Primo Chin. Primo was not particularly tall but built as solid as a boulder, and everything about the man suggested that he could be lethal with his fists and feet. Whether walking or standing still like now, the man was always balanced on the balls of his feet, keeping his center of gravity about his hips, ready to spring into action at any moment. And his eyes were always scanning his surroundings alertly. More importantly, he reeked of wizardry.

Her discreet inquiries about Primo Chin had met with blank walls—no family, no history—as if he had suddenly popped out of thin air into a San Francisco street. All she knew was the obvious: that Primo had plenty of money but never spent it unless it was on her prey.

Bayang concluded that unknown persons had sent Primo to protect Leech. After she was done here, she would have to ferret out their identities and deal with them, too. But that could wait. First things first.

Despite the urgency, Bayang had bided her time. Patience was the reason why she had survived this long and why she had been successful in all of her tasks, even murder.

When Primo began educating the boy in both fighting skills as well as regular school subjects, she had worried a bit. She knew Primo was actually preparing her prey for his true powers by developing his body’s agility and balance and his mind’s focus and knowledge.

If Primo had begun the actual lessons, Bayang would have had no choice but to attack immediately. Even if it meant her death, her prey could not be allowed to survive.

However, as long as Primo’s instruction remained at a basic stage, Bayang had waited, hoping that an opportunity would present itself. When she learned they had bought tickets for the incoming show at the Hearn Museum, she knew that her moment had
come. She would make her move within the galleries where the crowd would mask her approach and the man would be distracted by the displays.

She purchased a ticket, too, joining the line on the appointed morning. The museum’s massive, windowless, cream-colored walls dwarfed the people eager to see the new exhibit, the Treasures of the Silk Road, that was going to open today. Two-story-length banners hung down the front and the sides with pictures of gold and jewels, and in smaller letters at the bottom proclaimed: “Kushan: The Empire of the Moon.”

San Francisco was a city that valued spectacle and style in everything from its architecture to its criminals and even its politicians. And what could be more spectacular or stylish than to see priceless antiques that no one else in America had seen?

The spectators were in a holiday mood because the autumn sun had burned through the morning fog, and sparkled through the water rising from the fountain. Water sprites, looking graceful even in their baggy civil-service uniforms, molded the fountain spray into ever-changing shapes that seemed to dance across the surface of the reflecting pool. A naiad was tidying up some dead leaves at the base of her tree, its branches pruned over many years forming knobs. Seagulls had floated in on the winds from the sea and were drifting lazily in the cool, crisp air.

The fine morning seemed like a good omen for her task. As Bayang felt the sun against her face, she reflected idly that it was not bad for a human city.

She had not asked to be an assassin and even now part of her hated killing. Time and again, she had asked to be transferred to other duties, but her superiors had refused. They told her that this assignment fit her talents the best and, besides, she had developed an unusual tolerance of humans. Most of her people would have
been uncomfortable meeting a single hairless ape, let alone rubbing shoulders with them. More importantly, what she did was for the good of their people.

However, after so many centuries plying her trade, the explanations had worn thin and she was weary of her missions. She forced those thoughts aside, telling herself she needed to focus on the task at hand. Her eyes swept the scene again.

Alliance Forged by Kylie Griffin
Devil Takes His Innocent by Emma Anderson
Emily and Emerald by Kelly McKain
Freak by Francine Pascal
What Planet Am I On? by Shaun Ryder
Seven Day Seduction by Emma Shortt
The Blood Empress by Ken McConnell
Boots and Buckles by Myla Jackson
Camouflaged (Hiding From Love #0.5) by Laurence, Selena
Dirty Secret by Jessie Sholl