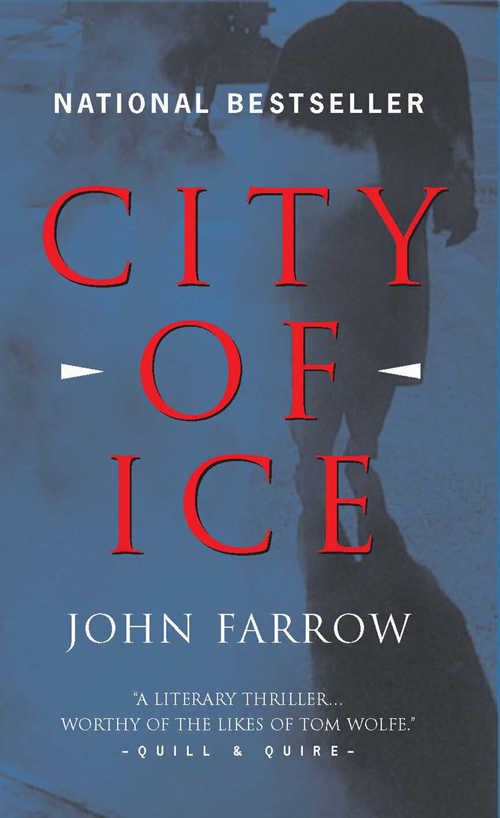 They called themselves
Wolverines.

In the freight elevator, Sergeant-Detective Émile Cinq-Mars ascended to the fourth floor of an office tower in Montreal’s north end. He got off and walked left down a brightly lit corridor, then right at the first junction. As instructed, he rapped three times upon a door marked CLOSET. It opened a crack. The detective displayed his gold shield next to his face. The door closed as the chain lock was disengaged, then opened fully, and a guard wearing a bulletproof vest and toting an automatic rifle let him in.

The man’s finger was on the trigger, the barrel aimed at the floor.

His eyes required a moment to adjust to the dimmer light of the palatial suite. Plainclothes officers, their backs to him, were lined up at the windows like pigeons on a rooftop turned to face the wind. In shadow, the cops stayed three steps away from the glass to preserve their secrecy from the outside world. Two snapped pictures with telephoto lenses. Three others observed the scene through high-powered binoculars. Another wore earphones. The cop who
had opened the door remained at his back, standing guard. Four more were occupied by traditional police work—they were sitting around waiting.

These men were the cream, the privileged few. Wolverines.

Across the busy intersection below them, they monitored activity at a bar where the Hell’s Angels Motorcycle Club was throwing a party.

“Ah, Cinq-Mars!” a man with a crew cut who sat slumped in a comfortable armchair announced. “Come in! Take a load off. Glad to meet you.” He rose and the two men shook hands. The host officer did not identify himself. The prevalent odor in the room was stale smoke, not body sweat—remarkable given the number of cops present and the oppressive heat. “Welcome to our stakeout. I’d introduce the surveillance team, Sergeant-Detective, but, as you can guess, I’m not free to do that yet.”

“Not a problem,” Cinq-Mars said in a cool tone. His manner indicated that, had it been left up to him, he’d choose proper introductions over the secrecy. A tall man, six-two, in his fifties, the detective was conservative in his dress, reserved in his demeanor. His outstanding feature was a magisterial nose, a proud, immense beak, ideal for lining up his famous hawkeyed gaze. His auburn hair was thin but wavy and, save for the receding line along his tall brow, he still enjoyed full coverage. Cinq-Mars was already perspiring as he accepted an offer to be seated. The man who had greeted him was younger, not as tall, and substantially thinner, yet he occupied more space. He spread his knees as he sat down while his elbows flared outward. The man smoked, and waved the cigarette as he talked, as if inscribing words on air.

“No thanks.” Cinq-Mars shook his head, confirming to himself that only an officer of the Royal Canadian
Mounted Police would offer lemonade. He was curious about the man’s identity. Who else but a Mountie would turn off the air-conditioning to give his long-range listening devices an extra measure of quiet? And only a very earnest Mountie would cut his hair that short. He wasn’t wearing his suit jacket and had slackened his tie. The temperature was unseasonably hot for September, still in the high eighties as evening settled. The man wore his service revolver on the back of his belt, which Cinq-Mars knew was more typical of city detectives than Mounties, or SQ, the Quebec provincial police, for those guys tended to be more hidebound when it came to regulations.

Not having been introduced, Cinq-Mars had his back up.

“Sergeant-Detective,” the crew cut said, lowering his voice to signal an intimate aside, “you know we wanted you with us from the beginning.”

Three police departments had committed elite officers and resources to form a new tactical squad, a strike force, and a crack investigative team. Put together as a desperate measure to combat increasingly powerful biker gangs, they had as targets two warring enemies, the Hell’s Angels and the Rock Machine.

Wanting a menacing name for their squad, the cops had called themselves the Wolverines. “You’re the best cop in the city. Your record is exemplary—without parallel, I’d say. You have contacts no one can begin to emulate. You’ve set the ethical standard for policemen in this town. Stop me if I’m embarrassing you.”

Cinq-Mars smiled briefly. “I appreciate the flattery. That doesn’t mean I’m influenced by it. Do you think I could call you by your rank, at least?”

The crew cut waved his cigarette around, mulling it
over. “It’s Lieutenant,” he conceded. “Cinq-Mars, we could use a man like you.”

The city detective shook his head. “Gangs don’t interest me much. I prefer to investigate petty crime. Your work is out of my league, Lieutenant. In my opinion, if we arrest crooks we’ll win. Conspiracies, international plots, organized crime—that kind of talk addles my brain.” He did his best to laugh him off.

Cinq-Mars recognized the smile on the face of the younger officer, a man in his early forties. Little more than a polite scoff, really, it was the smile of a man who didn’t believe him.

“Company’s coming,” a voice at the window called out.

The lieutenant signaled with his chin for Cinq-Mars to move across to the windows with him. “What’ve we got?” They gazed down upon the intersection and the bar under surveillance. Beyond the immediate scene, through the dust of late summer and the heat haze, above the drone of traffic, low apartment buildings and duplexes were chockablock for miles, their flat, tar-and-gravel roofs forming a vast, desolate moor.

“Toyota 4Runner, just went up the block and parked.”

Cinq-Mars checked out the bar through the glasses, an instrument so powerful that he had a better view than if he was down there himself. Motorcycles were crammed across the side patio, tables and chairs stacked out of the way. A neon light flickered dimly.
Bar Salon.

“Doesn’t it rot your socks?” the lieutenant whispered. “The Hell’s Angels have decided to put themselves on
display. A show. They ride their bikes around the neighborhood. Cause a sensation. Now they settle into one of their own bars to have a good time. Why? So they can bait the press. They’ll say, ‘See? We’re out in the open. We’re not a secret organization. All that stuff you read about us is bullshit. We’re not killers. All we want to do is ride our bikes and be left alone.’ They show their colors, their leather jackets and leather pants, the tattoos on their arms, their rat’s nest hair, their beards, their wild women, all to demonstrate that they’re public, not a covert criminal organization. People lap it up.”

“Coming down,” a voice at the window warned.

“Tell me about this guy,” Cinq-Mars requested.

Of medium height and build, bald across the scalp, the man from the Toyota 4Runner wore a smart, understated gray suit with a pin-striped white shirt and dark blue tie. Through the binoculars Cinq-Mars could see every detail. He caught the red glint of the setting sun off the man’s diamond ring. Caught the shine off his shoes. He had the clean pores of the rich. He was carrying a leather satchel with brass fittings and Cinq-Mars could make out his initials stamped in gold lettering. He’d read about satellites that could track the flight of a golf ball, but he’d settle for a pair of these if he wanted to watch the world at close range. He figured they’d cost a month’s salary. The Wolverines, it seemed, owned a few nice toys.

“George Turner lives on the mountain in upper Westmount. Attractive wife. Two kids. Well connected. Often seen in the company of politicians. An accountant by trade who carries only one client. The Hell’s Angels. He’s rarely seen with them in public, so this is significant. This is a move.”

“Who else is inside?” Cinq-Mars asked, doing his best to mask his interest.

“Wee Willie, wearing biker colors for a change.
The gang’s Number One. We hardly ever get to see him out of his sports shirts and dress slacks. The boys are putting on a show for some reason.” The detective sucked a drag off his smoke as if inhaling bad news. “Tonight he’s bare-chested, showing off his tattoos. He got his name, by the way, from his tiny eyes, not his bulk. The fact that he’s three hundred and fifty pounds is incidental. Another guy in biker colors is Plug. A runt, no bigger than a hydrant. We’ve never seen him out of a suit and tie until this afternoon. He’s the gang’s computer nerd, a whiz kid. The other top Angel we identified is Jean-Guy. He’s in a suit—dapper white threads, wouldn’t you say, gentlemen? Black tie, yellow shirt. Greaseball haircut. Jean-Guy is the gang’s munitions expert. Nobody knows dynamite like Jean-Guy.”

Outside the biker bar, the man called George Turner had paused for a smoke before going in. He looked out of place leaning on the saddle of a Softail Harley. A passerby might easily mistake him for an innocent, be tempted to warn him away. At the side entrance, a burly biker stood guard.

“Giuseppe Pagano is inside, too,” the Wolverine lieutenant continued. “Old-guard Mafia. Got turned away when the local Italians split up, so he threw in with the Angels. Also present is Max Gitteridge, their lawyer. That means they’ve called their lawyer, their banker, their allies, their bomber, their computer expert, and their Number One to this meet, and some dude we don’t know. Something’s going down.”

“We call him the Czar. We’ve heard about him, but we haven’t identified him yet and we’ve never seen him. Couldn’t get a picture today either. Not so far. He’s wearing a Panama hat and a cape, if you can imagine that. In this heat.”

Down below, Turner finally ditched his smoke and entered the bar.

The officer shrugged. “Maybe when he comes out. This meeting is in public view, so we figure he’s the reason for the show. From wiretaps we know there’s a Russian on the scene, looking to do business. He might be the guy. If he is, he heads a coalition of Russian gangs. Either the Angels want to prove to him how tough they are or they want to demonstrate that they’re free to spit in our face any time they choose. That’s why the meeting’s public. We’re guessing it’s the Czar they want to impress.”

“Sure they do. Check out the guard, Cinq-Mars, through the glasses.”

Cinq-Mars looked him over. He was a scary individual, muscled and huge. Ponytailed. The detective mused that tough guys now wore earrings. That was something he’d never seen in his early days as a cop.

The glasses were that strong. The tattoo read,
The Filthy Few.

“Know what that means?” the lieutenant pressed him.

“He’s a killer.” The designation had been widely reported.

“It means he’s killed on behalf of the Angels,” the lieutenant specified. “Do you see our problem here? They openly brandish the fact that they’re murderers, they know we’re taking pictures and they don’t give a damn. You’re too good a cop to let this happen in your city, Sergeant-Detective, on your turf.”

They went back to the dim lounge area of the office.
The room was probably used for business luncheons in normal times, and as a space to entertain clients. A portable wet bar was set up in one corner, which the cops weren’t using except to mix lemonade, and the sofas and coffee tables were on casters so that the room could be rearranged to suit any occasion.