Claimed by the Sicilian Tycoon 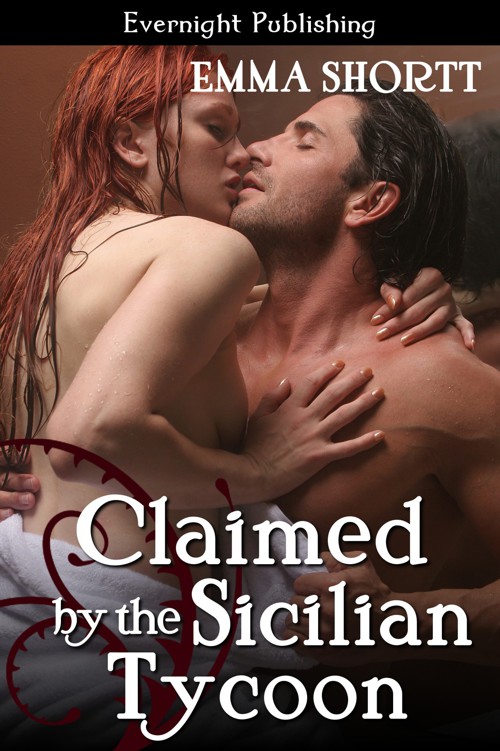 CLAIMED BY THE SICILIAN TYCOON

The three sisters sat around
the battered kitchen table, each lost in their own thoughts. Apart from the
steady ticking of the clock, and the occasional bleep of an aged appliance,
silence prevailed. Despite that, anyone who happened to look in on the scene
would have stopped for a longer look. If it were a man, he’d have stopped
hoping for a damn sight more than that.

The first sister, Penny, sat
with her legs curled under her. There shouldn’t have been room on the chair for
her to sit in such a position, but Penny was the flexible one. The ways she
could curl her legs had impressed many a man over the years. She wore tight,
black, slightly frayed jeans, and an equally as tight tee. It should have been
black too, but it had been washed so many times it was almost grey. This was
made all the more obvious by the fact that Penny’s raven hair fanned her
shoulders, reaching to the small of her back. She sighed slightly, brushed her
hair over, and behind, her ears, before fixing her emerald eyes on the picture
in front of her.

The second sister, Rachel, the
youngest by three weeks, had her legs crossed under the table, her flowered
sundress perfectly demure, just skimming her knees. She looked like sunshine
and happiness, the sort of girl you couldn’t help but like even as her
perfection grated. Her blonde hair was curled like a fifties movie star, and
her limpid baby blue eyes were serene. Everything about her screamed innocence.

Rachel knew her job well, and
she too had her gaze fixed on the picture laid before her.

The third sister, Lyra, oldest
by five months, had her legs sprawled over the side of the chair, so that her
feet rested on the spare. She was barefoot, dressed in tiny denim shorts and a
scarlet halter neck top. Her huge mane of copper hair—which should have clashed
with the top but somehow didn’t—was tousled into an untidy bun, and her slate
blue eyes were pensive.

All three sisters had a lot to
think about.

“We’re good to go, then?” It
was Penny who finally broke the silence, and had her sisters lifting their
gazes to her.

“It seems so.” Rachel’s voice
was as soft as her curves. “There's nothing left to do. We've gone over the
plan a million times.”

“Not quite a million,” Penny
said. “Maybe a thousand.”

“Well I feel like it's burned
into my brain so I've lost count.”

Lyra snorted, swung her trim,
tanned legs down and picked up one of the three pictures off the table. “It
should be burned in there. It needs to be."

“Think of it like a battle
plan,” Lyra added, holding her picture in front of her. “You’d want to be clear
on the details before charging in wouldn’t you?”

“Yep, and I’ve definitely been
given the hardest mission.”

Penny shot Lyra a look,
tilting her head in a gesture that was characteristic to her. “You think? I’d
say Rachel has.”

Lyra laughed. “She can carry
off the innocent flower look to perfection. I on the other hand…”

“Have to play sex bomb,” Penny
said. “Not exactly a chore, sweetie.”

Lyra swatted her sister with
the picture, a wide grin creasing her face. “No you’re right, it’s not. But
he’s going to be a tough one. You aren’t even going to have to see yours.”

Penny shrugged and picked up
the picture in front of her. “A shame. Sebastian Demetrious is all kinds of
hot. I wouldn’t say no to a quick tumble.” She held up her hand as Rachel made
to speak. “I know! I know! But if you guys had my skills, you could get away
with a quick in and out, too. And don’t forget the success of my mission is
crucial to both of yours. I fail and the whole project fails. The auction for
The Point closes on Sunday. If we don’t have the money by then…”

“The plan is not going to fail
because
no one
is going to fail,”
Lyra insisted. “Penny, you’ll get the money so we can buy the building, then
Rachel and I will sort out the rest. Your mad skills have got this, as have
ours.” She stabbed a blood red fingernail at her picture. “As Andros
Casstellini will soon find out firsthand.”

“That he will, sweetie,” Penny
agreed, giving Lyra’s cleavage a nod. “I certainly wouldn’t bet against Lyra
‘the man eater’ Matthews.”

The two sisters laughed, but
Rachel did not join in. She twirled a length of blonde hair around her tiny
finger, and bit down on her plump bottom lip. “I know we’re making light of all
of this, and I don’t doubt Lyra’s ability to get what she wants,” she said.
“But I still say yours is the most dangerous, Penny. If you get caught…”

Penny and Lyra both shot out
their hands to take Rachel’s, offering the comfort that was so natural between
them all, the laughter no more.

“No one is going to get
caught,” Lyra said. “Least of all Penny ‘the cat’ Matthews. She’s never even
come close. And we agreed this all months and months ago. We can’t do what we
need to unless Pen succeeds. Screwing this up is not an option.”

“She’s never done anything
this big before,” Rachel said.

“You haven’t either,” Penny
replied, giving Rachel’s dress a tug around the bosom, before pointing to her
picture, that of the notorious Italian playboy Dominic Rimeria. “But I don’t
doubt the skills of Rachel ‘the Madonna’ Matthews. So don’t you be doubting
mine.”

Rachel smiled, albeit a
strained kind of one, and pulled the dress back up. “Don’t mess with the
disguise!”

“We’re all going to do this,”
Lyra said, standing up and looking back and forth between her sisters. She was
doing her oldest sister voice, though Penny had often said that five months
barely warranted the title. They were all in their twenty-fifth year, each as
old as the other, in years and certainly in life experience. God knew they all
had plenty of that.

“And in a few weeks we’ll have
exactly what we’ve been planning ever since we escaped that goddamn foster home
ten years ago,” Lyra continued, almost daring her sisters to disagree. “We’ll
be women of the world. Free to do as we please, and no one will be able to tell
us, or force us, to do things we don’t want ever again.”

“The power will be ours,”
Penny said.

She held out a hand to either
side of her, and the two other women stood up. Penny’s pale hand took her left,
Rachel’s lightly bronzed one her right. Clenched tightly together, their arms
made a perfect, equilateral triangle, and there in the kitchen standing thus,
and as they looked from one to the other, resolve settled across them all.

Because danger or not, jokes
or not, the women who were bonded over a decade and a half ago by events that
counted for more than a blood connection ever could, each knew that in their
world only those with the power could call the shots. After twenty-five years
of none, all were determined they would have some. And they were realistic
women. They knew that in reality there was only one way for them to get it.

As if on cue, they all looked
down at the table, at the pictures of Sebastian Demetrious, Andros Casstellini,
and Dominic Rimeria. Three billionaires, three playboys, all disgustingly rich,
and ridiculously predictable.

Their marks. Each of them
handpicked.

And each sister thought it at
the same time, though none said it, because it barely needed saying.
These men have no idea what they have
coming…

The
drink set in front of her could have been many things. A vodka and tonic, a gin
and soda, even a white rum with a dash of something fruity. Lyra wasn’t sure
which, but suspected vodka purely because of the glass. It was a wide bottomed
tumbler with a frosted ring of ice, and when she’d worked bar in a similar up-market
club she’d always put vodka in a tumbler with that exact same frost. It looked
good, and kept the drink chilled to perfection. Plus if anyone had bothered to
look at the glass she was currently drinking from—an identical tumbler—they
would have thought vodka and ordered accordingly. They weren’t to know that she
was drinking icy water, that no alcohol would be passing her lips in this club.

Big Cat Mates Leopard Territory by Cynthia Sax
Owls Well That Ends Well by Donna Andrews
Mission: Out of Control by Susan May Warren
A Hummingbird Dance by Garry Ryan
Where I Wanna Be by Roberts, Vera
Wreck (Bareknuckle Boxing Brotherhood Book 2) by Nelson, Cara
Gravity's Revenge by A.E. Marling
Always by Rose, carol
A City of Strangers by Robert Barnard
I Take Thee by Red Garnier