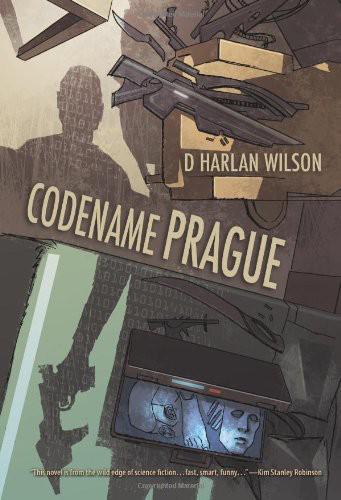 Book Two of the Scikungfi Trilogy.

and for STICK FIGURE INCORPORATED in
Pseudofolliculitis City
.

Other Books by D. Harlan Wilson

Dr. Identity, or, Farewell to Plaquedemia
Blankety Blank: A Memoir of Vulgaria

Stranger on the Loose

Pseudo-City
They Had Goat Heads

while I watch the cannons flashing.

I clean my gun and dream of Galveston.

color for both me and you.

tribal spaceman and all that’s in between.

—The Spice Girls, “Spice Up Your Life”

It’s a great day for genocide. (What’s that?)

That’s the day all the niggaz died.

So what the fuck you think they’ll do to me?

—Ice Cube, “When Will They Shoot?”

For all the aborted and unrealized acronyms.

—The Amerikan Hemorrhage Dictionary of Scikungf
i

With the names of the original actors and reality studios in alphabetical order.

Man in a Letter P Costume

Man with a Goat Head

Certain memories become sacred. In D. Harlan Wilson’s case, it was the time he tripped and fell into an ancient liturgical drama, swearing point-blank into the face of a bishop long dead. He then wounded nineteen people while running amok in that antique realm, as the metal-clawed creature later known to history as “Spring-Heeled Jack.” Thus he knew paradise and lost it. Wilson is now as helpless before the dictates of his moods and whims as he was before the violent wormhole calamities of childhood. But that is unimportant. What matters is that he exists and that he was made aware of the fact before we were. Everyone has experienced the dismal waste of time that can be inflicted by those who wish us to know them before they know themselves. This is a crime for which Kermit the Frog has yet to be punished, unless you count the fact that he can’t stop moving his arms.

It is not unusual for the memory to condense into a single mythical moment the contingencies and practicalities of artistic inspiration. Wilson claims he decided to write his barbaric and erudite Scikungfi Trilogy while trying to inflate some sort of pool toy, an exercise at which he repeatedly failed until collapsing into tears, a pathetic sight for one and all. That crude vinyl icon of a camel, dented and lopsided, hung from his lap like every failure in his life. Wilson’s life can indeed be divided into two parts: before and after this sacramental defeat. It was a bankruptcy localized enough to be effective—effortlessly checkmated by a novelty plaything, what could he do but overcompensate, creating a mental yakuza in which he could demand massive respect? The accident riveted him to a public downfall like a voodoo chicken to the door of a grateful Catholic priest, who cooks the mascot for his happy family. The scornful gaze of Wilson’s friends as he let the flaccid toy slip from his slack hands transformed him into a constituted nature. He dreamed of a world in which his powers—those of the mind—are respected. Such a world does not as yet exist, but he can imagine one in the very mind that desires respect—thus creating a vortical involution resembling his inefficiently pursed lips during that initial washout of an afternoon.

We can surmise that this decision will be of capital importance—to say, in defiance of all, I Will Not Merely Be A Beaky Buffoon For You Bastards. Rather than a journey to the end of his misfortune, he invents a way out via a character who can make a blow to the face last a week. An altar of asphalt and sugar bulges from Wilson’s fireplace, embedded with femurs and vintage Vickers ammunition belts. He can immerse his books in concrete detail—coincidentally a fate the mob have had in mind for him since he crashed one of their meetings in a monster truck and leaned out to explain that the universe is “not motivated by obligation—where’s your Omerta now?” Such mad confidence within despair will bear grim fruit. It spies on its own inner life and discovers electric mischief elves pounding up eternal-repetition exit ramps aglow. To the right-thinking man these denote only psychosis, yet these are what Wilson offers to others in the guise of “supporting players.” Sure of possessing the ground spice created from exploding truth at supercompressed angles (actually the corner of someone else’s barn) and concerned only with being seen in this undertaking, he expects to be tolerated. If he looks at himself in this mirror, he sees the accelerated colors of his magically-clad transparencies, at vertices to each other and tagged with self-triggering name-clues that should be obvious to you, reader. We have seen that, as a result of his multidimensional misfortunes as a child and his public inadequacy as an adult, he has dreamed of raising himself above men. Despite the daily battering of a thousand bitter truths, this dream has never left him. Society, too, defends itself against the barrage of facts present and latent in the universe, against the numinous and the precise, by means of custom—that is, by a body of consensual observances. Inversely, infraction of the customary rules invests the offender with a sacred aura because it confers upon him the power to unloose truthful powers—though whether he chooses to use his oblique position for this purpose is another matter. In
Tarka the Otter
we find that Henry Williamson has used the outcast position merely to talk about an otter and “his joyful water life,” deftly skirting the explosive issues of scorching sedition and profanely exotic rebellion almost any other writer would have explored.