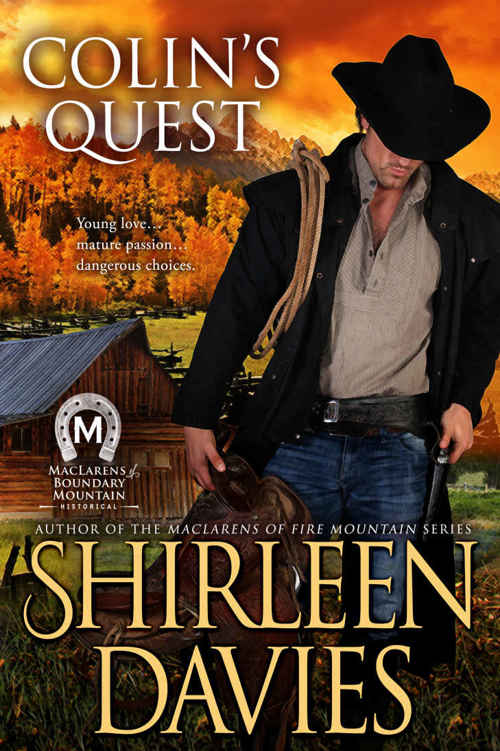 Tougher than the Rest, Book One

Faster than the Rest, Book Two

Harder than the Rest, Book Three

Stronger than the Rest, Book Four

Deadlier than the Rest, Book Five

Wilder than the Rest, Book Six

All Your Nights, Book Four

No Getting Over You, Book Seven

Reclaiming Love, Book One, A Novella

Our Kind of Love, Book Two

The best way to stay in touch is to subscribe to my newsletter.
Go to

www.shirleendavies.com
and subscribe in the box at the top of the right column that asks for your email. You’ll be notified of new books before they are released, have chances to win great prizes, and receive other subscriber-only specials.

Kindle Readers:
Sign up to follow me on
Amazon
to be notified of new releases as they become available. It’s the Follow button just under my photo on the left side.

Book One in the MacLarens of Boundary Mountain

Colin’s Quest is a work of fiction. Names, characters, places, and incidents are either products of the author’s imagination or used facetiously. Any resemblance to actual events, locales, or persons, living or dead, is wholly coincidental.

Book design and conversions by Joseph Murray at
3rdplanetpublishing.com

I care about quality, so if you find something in error, please contact me via email at [email protected]

“The author has a talent for bringing the historical west to life, realistically and vividly, and doesn’t shy away from some of the harder aspects of frontier life, even though it’s fiction. Recommended to readers who like sweeping western historical romances that are grounded with memorable, likeable characters and a strong sense of place.”

For An Undying Love…

When Colin MacLaren headed west on a wagon train, he hoped to find adventure and perhaps a little danger in untamed California. He never expected to meet the girl he would love forever. He also never expected her to be the daughter of his family’s age-old enemy, but Sarah was a MacGregor and the anger he anticipated soon became a reality. Her father would not be swayed, vehemently refusing to allow marriage to a MacLaren.

Time Has No Effect…

Forced apart for five years, Sarah never forgot Colin—nor did she give up on his promise to come for her. Carrying the brooch he gave her as proof of their secret betrothal, she scans the trail from California, waiting for Colin to claim her. Unfortunately, her father has other plans.

And Enemies Hold No Power.

Nothing can stop Colin from locating Sarah. Not outlaws, runaways, or miles of difficult trails. However, reuniting is only the beginning. Together they must find the courage to fight the men who would keep them apart—and conquer the challenge of uniting two independent hearts.

This book is dedicated to all the members of my Street Team.

You are an awesome group and your support means a great deal to me.

Thanks also to my editor, Kim Young, proofreader, Alicia Carmical, and all of my beta readers. Your insights and suggestions are greatly appreciated.

As always, many thanks to my wonderful resources, including Diane Lebow, who has been a whiz at guiding my social media endeavors, my cover designer, Kim Killion, and Joseph Murray who is a whiz at formatting my books for both print and electronic versions.

Other Books by Shirleen Davies

“Kyla, we must keep the bairns together.” Angus MacLaren’s booming voice rang above the chaos of those boarding the steamship SS Glasgow. At well over six feet tall, he towered above most of the passengers who shoved forward, waiting for permission to board.

Winds whipped around the large crowd as they waited for the captain to make the boarding announcement for those holding berths on the steerage or tween deck area of the steamship. Angus guessed well over two hundred would be living in close quarters during the trip across the Atlantic.

The savage storm, which they’d hoped to avoid, broke loose as the passengers huddled together, unsuccessfully trying to keep their meager personal belongings from soaking through. As the rain pounded down, everyone surged forward. Being trampled became a serious concern as Angus and his wife tried to keep their boys together while staying close to the three other MacLaren families.

“I have them, Angus. Do not separate yourself from us.” Kyla gripped Camden’s hand as Colin and Blaine tugged at her dress, and Angus pressed himself to her back.

“Angus and Kyla MacLaren, and children, Colin, Blaine, and Camden.”

“Ewan and Lorna MacLaren, and children, Brodie, Jinny, and Fletcher.”

“Ian and Gail MacLaren, and children, Sean and Bridget.”

The attendant looked at the list once more. “Is that all the MacLarens?”

“Stay close, lads.” Angus glanced toward his brothers, Gillis, Ewan, and Ian, as the mass of humanity surged ahead, rendering them unable to stop or step aside. Four of the MacLaren brothers and their families had spent years saving for the voyage to America, then another year waiting for enough space on the steamer to accommodate all twenty of them.

Following directions, they took steep, narrow ladders to what would become a cargo hold on the return trip to England. For the voyage to America, however, bunk beds, holding up to five passengers each, had been erected in rows of two from fore to aft.

Angus’s wide shoulders scraped the sides as he took the steps down. Landing on the wooden deck, he stood, thankful he had a few inches to spare. Glancing amidships, he spotted what he wanted—four bunks together.

“Colin, Blain, come with me.” Doing his best not to trample others, he turned sideways, making his way through a space not more than eighteen inches wide, tossing his bag ahead of him to land on one of the bunks. The boys followed his lead, several other MacLarens doing the same.

“Good of you, Angus.” Gillis clasped his older brother on the back as all four families secured their space.

Angus glanced at his family, thanking God they’d made it this far. Four brothers, their wives, and their children were all taking a huge risk by leaving Scotland behind to forge what they prayed would be better lives in a new land.

“Da, wake up.” Colin shook his father. Feeling the ship heave one way, then another, as massive waves slammed against the sides, Angus’s eyes opened a crack, then widened at the jolt of the water’s impact.

“Where’s your Ma?” Angus’s voice was full of unease as he pushed up, his head whipping around to count the number of MacLarens clustered together. He accounted for everyone except two—his wife, Kyla, and youngest son, Camden.

Gripping Colin by the shoulders, he held him close. “Where are your ma and Camden?”

“Stay with your uncles.” It was all the warning Colin got before his father pushed him toward Gillis and dashed up the ladder, unaware Colin had ignored his order and followed him.

“You can’t be up here.” The deckhand grabbed Angus’s arm, his voice barely understandable over the roar of the crashing waves. “Get below where it’s safe—both of you.”

Angus wrenched out of the man’s grip and whipped around, noticing Colin a few feet away, gripping the railing with both hands. Anger now added to the cold ball of fear building in his stomach. He didn’t have time to deal with a disobedient son.

“My wife and son are missing,” Angus roared, shoving the man aside. “Kyla! Camden!” Grabbing whatever he could to stay on his feet, he made his way aft, keeping watch over his shoulder at Colin.

Spotting no sign of them, he turned aft, grasping Colin’s arm as the ship shifted, tipping toward starboard. Pulling Colin down with him, he landed on his back, failing to find anything that would stop his body from sliding toward the side. Seeing panic in his son’s eyes, Angus calmed his features.

“Don’t be afraid, laddie. We’ll get out of this.” Choking on water, Angus tried to stand at the same time another huge wave hit the port side. Water gushed onto the deck, lifting both of them above the level of the rail. “Let go of me!” Angus yelled as the momentum carried him away from Colin.

Never Seduce A Scoundrel by Grothaus, Heather
Your Republic Is Calling You by Young-Ha Kim, Chi-Young Kim
The Devil's Details by Chuck Zerby
The Librarian (Book Two: Unhappily Ever After) by Hobbs, Eric
Beneath the Surface by Heidi Perks
Silver Shark by Andrews, Ilona
Brendan Buckley's Universe and Everything in It by Sundee T. Frazier
Paper Bullets by Reed, Annie
The Bear's Tears by Craig Thomas
Fight And The Fury (Book 8) by Craig Halloran