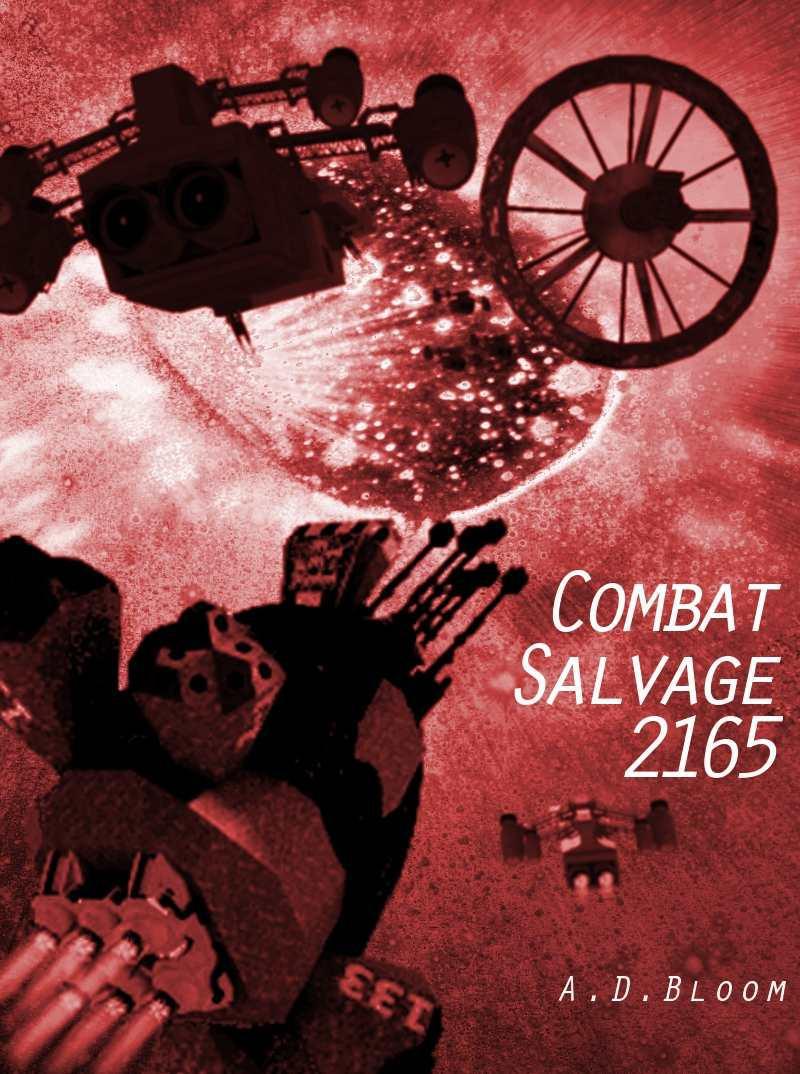 If you like this book, read The War of Alien Aggression, by A.D. Bloom

The author would like to express his appreciation to the New England Air Museum, USS Nautilus (SSN-571), USS Massachusetts (BB-59),  and /r/WarshipPorn.

As the ‘War Against Alien Aggression’ enters its second year, Privateer attack carriers and UN capital ships struggle to push the Squidies farther from Sol, but the battle lines at Sirius verge on collapse. Should they fall, Earth’s days are numbered.

Privateer warships as big as two city blocks soared over Tig’s head, rising into a leaden sky. They rode the spaceport's artificial gees to orbit, and the rivers of rainwater that sluiced off them fell upwards.

"
Where is little Tiggy?" The accented, growling voice bounced off the fast-printed slums at the Staten Island Spaceport’s southern tip. Bilkor was close. Tig looked over his shoulder for his pursuers through the shuffling crowds that filled the Freshkills streets.  Sweat mixed with rain stung his eyes.

He pushed his way through until he could sprint down the ten-meter-high wall separating the slums from the spaceport and the launch pads. Two minutes later, he’d found the maintenance access door. His lungs burned as he held the rig he’d made close to the door’s interface panel so it could sniff the internal RF leakage and spoof a valid ‘handshake’ with the lock.

The tape-bound, match-soldered cracker opened the hatch doors on Staas Powerlifters, rental IC Hoppers and half the Staas Company vehicles or systems he’d ever tried it on. Staas Company made the fifty-year-old spaceport door in front of him, too and he knew with a little time he could open it, but a launching ship overhead prematurely flared its main engines inside the clouds and bathed the spaceport and half of Staten Island with an eerie, pale luminescence. It cut through the dim from all sides at once and left no shadows to hide in.

"
There
is little Tiggy!" Bilkor shouted from a block East. "I see you!" His two thugs wore boxy raincoats. The streets thinned and emptied around them.

Tig blinked and spat rainwater. He shouted into the hissing rain, "Bilkor! I can make up the money you lost!"

The spotlight beam shone down from almost directly above Tig’s head, and, like an idiot, he looked up so it stabbed at his eyes and half-blinded him. Red lights and blue lights flashed and reflected off every wet surface. When the shiny security drone floated down to hover in front of the maintenance door, Tig knew enough to raise his hands slowly and step back.

The meter-wide, half-barrel of a drone hovered on its own artificial gravity, maneuvering on six little nacelles. It bristled with whip antennae on all sides except underneath where it carried a turret-mounted microgun like a stinger. Its voice boomed. "You have attempted to gain unauthorized access to a restricted area. Please lay down with your hands over your head. Failure to comply will be met with appropriate force."

He weighed felony arrest against whatever Bilkor meant to do to him and it was an easy decision. By the time the security drone was done with its speech, Tig was already on the ground. He looked up from the wet just in time to see one of Bilkor’s goons pull something big from under his raincoat. The drone saw the fat, tri-barrel anti-tank weapon, too.

The microgun firing on auto sounded like someone shuffling a deck of cards in his ear. Bilkor's goon with the heavy weapon jerked and danced before the 50 or 60 tiny rounds the drone had fired detonated inside him. Fluid overpressure made him burst, and he popped like a squeezed tomato. But not before he fired.

Multiple flashes dazzled Tig’s eyes, and streaks of fire shot up into the rain, high and off target before the missiles corrected for the dying user’s aim and pointed their noses at the drone. When the first of them hit, the initial flash of detonation burned the image on Tig’s retina. With his eyes squinted shut, he saw one of the missiles stuck in the drone’s side like a fat arrow.

The concussive wave hit in that same moment, searing him with pressure-heated air and crushing him down into the wet street. Pieces of something spinning fast ripped above just before more blast-waves slammed him.

He couldn’t hear anything but ringing, but when he realized he was still alive, he lifted his face out of the puddle and looked up. Smoke and steam filled the air, but the red and blue lights were all gone. So was the drone. Twisted pieces of it steamed in the water where they’d fallen against the maintenance door, right next to the big hole in the security wall…the new one…the meter-wide hole into the spaceport that hadn’t been there only seconds ago.

Tig rubbed the oily saltwater out of his eyes to make sure it was real. It was. Bilkor’s man had missed the drone at least once and blown a hole through the wall. Tig sprung up from where he lay and took the second chance he’d been given. While blood-spattered Bilkor screamed pidgin curses at him, Tig shot through the hole and into the Staten Island Spaceport.

He ran through stacked engine parts and rolled around stomping knuckledragger mechs and made for a 600-meter transport ship he saw lined up for orbital ascent. It loomed above like dripping, charred steel cliff. He sprinted to the first one in line and ran through the sluicing waterfalls coming off the hull. He ran right under it. That ship was about to launch. The artificial gravity pad under it blinked dirty yellow and black stripes at him and warning sirens blared as he ran across.

His plan had been to run as fast as he could across the pads and make it to the other side just before the ship launched. Tig figured if Bilkor and his remaining man followed, then they probably wouldn’t make it. If they
didn’t
follow him, then the lead he’d gain by forcing them to go around would be big enough that he’d have a good chance to lose his pursuers once he got off the pads.

It was a good plan except for two things. One, he hadn’t counted on Bilkor forcing his man onto the active launch pad at gunpoint. And two, Tig couldn’t run as fast as he thought he could.

The launch pad’s inverse gees kicked in before he could make it across and out from under the transport. First, he felt his organs lift inside his body. Then, his feet lost contact with the launch pad. He spun slowly, arching over, upside down and backward, trying not to lose his last meal as he lifted off with the rising ship.

After seconds of slow free-fall, he hit the ship above hard enough to stun him. Tig rolled to his stomach and pushed off and got to his knees, now feeling himself pressed to the hull by the inverse gravity. He was right-side-up, but the spaceport and the Earth hung upside-down above him. Overhead, the spaceport and the glitter of the Freshkills towers were shrinking fast. The temperature dropped every second as launch vortex winds tried to blow him over and pressed his clothes to his body.

The first exploding rounds struck the hull next to him, snapping like firecrackers and sparking so bright he jumped up in the air to get away from them. The landing gears that promised cover were all too far away to reach and they were already being withdrawn into the hull so Tig sprinted across the patch-welded keel side of the ship, making for the raised elements he saw thirty or forty meters off. He thought he saw portholes and what looked like an emergency airlock door. Already, the launching transport was a few kilometers over Staten Island and the air was getting thinner fast.

He couldn’t crack the airlock door locks with someone shooting at him, so he ran around the L-shaped structure to get away from the bullets. The hired gun chased him, but the thug must have run the other direction around the structure because Tig rounded a corner and plowed right into him without even meaning to.

Tig was skinny, but taller, and his bony shoulder caught the man's jaw. The killer teetered off balance, bent backwards over the edge of a steep section of hull. His raincoat snapped in the wind and his eyes went wide just before Tig gave him the final shove he needed to start sliding down the hull's steep slope like he was riding a playground slide.

If he screamed when he saw the edge coming, Tig couldn’t hear it over the wind. Bilkor’s thug slid off into the air next to the hull and fell upwards. He tumbled with his limbs extended, cartwheeling. As long as the inverse gravity well from the spaceport was on and he didn’t drift out of the projected field, he’d fall upwards with the rising ship, all the way to orbit.

With spots in front of his eyes and a gray mist clouding his vision, Tig and his decoder finally cracked the emergency airlock hatch. "Welcome," it said as he collapsed on the deck inside the transport. The hatch closed behind him and sealed. "Staas Company Security has been notified of your presence."

The blank-faced recruits clogging the tube in front of Tig and Parker wore cheap, animated street clothes. He could see these cuffies were fresh off the boat. They'd wandered into the Staas Technical Training Station and stopped right in the middle of a three way ITC junction, lost and gawking like it was their first time off-world.

Tig said, "
You think we should tell them where to go? Raw recruits reporting for greasing go straight to 9c for delouse."

"Let ‘em figure it out," Parker said. "When
we
got here, some graduating AMTS sent
us
to the waste reclamation modules."

Three months ago, Tig and Parker had been reporting for training just like that lot. Parker had signed up with a Privateer recruiter right out of school. For Tig it had been a simple choice between signing on with the Staas Company Privateers or going to jail for a long, long time. They tested him and told him he’d get to work on spaceships if he joined up as a redsuit. Three months later, Tig was a crewman graduate of the TTS, Staas Company’s Technical Training Station, basic training for an astronautics maintenance technical specialist, an AMTS m-13-05, a redsuit.