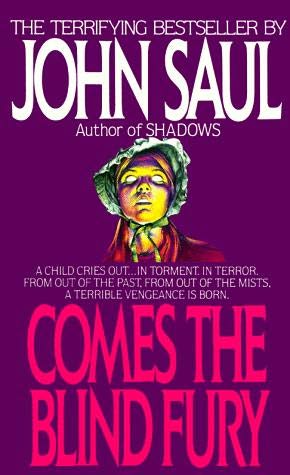 “YOU GET AWAY FROM ME,”
SUSAN CRIED.
“YOU LEAVE ME ALONE!”

Her face contorted into a mask of fear. She turned and fled into the swirling gray mists. Relentlessly, Michelle started after her.

Michelle stood still, listening, waiting. The scream, when it came, was muffled, floating. Then she felt the strange child close to her once more, almost inside her.

The words echoing in her head, Michelle started slowly homeward. By the time she reached the old house, the sun was shining brightly again from a clear early-autumn sky. The only sound was the crying of the gulls.…

All rights reserved. No part of this book may be reproduced or transmitted in any form or by any means, electronic or mechanical, including photocopying, recording, or by any information storage and retrieval system, without the written permission of the Publisher, except where permitted by law.

The trademark Dell
®
is registered in the U.S. Patent and Trademark Office.

She moved slowly along the path, her step careful, yet not hesitant. The path was familiar to her, and she knew almost by instinct when to move to the left, when to veer to the right, when to stay close to the middle of the trail. From a distance, in her black dress and her bonnet, she looked more like an old woman than a child of twelve, and the walking stick she always carried with her did nothing to lessen the impression of age.

Only her face was young, serene, and unlined, her sightless eyes often seeming to see that which was invisible to those around her.

She was a solitary child; her blindness set her apart and placed her in a dark world from which she knew there would be no escape. Yet she had accepted her affliction as she accepted everything—quietly, peacefully—gifts from a God whose motives might seem clouded, but whose wisdom was not to be questioned.

It had been difficult at first, but when it had come
upon her she had still been young enough that her adjustment was almost natural. What had been seen was now only dimly remembered, and her dependence on her eyes was completely forgotten. Her other senses had sharpened. Now she heard things no one else heard, smelled perfumes in the sea air that would have been strange to anyone but her, and knew the flowers and the trees by how they felt.

The path she walked today was one of her favorites, winding along the edge of a bluff above the sea. On this path, her cane was almost unnecessary, for she knew it as well as she knew her parents’ home a few hundred yards to the south. She counted her steps automatically, and her pace never varied. There were no surprises on the path, but her cane still went before her, waving from side to side, its white tip like a probing finger, eternally searching for anything that might block her way.

The sound of the ocean filled her ears, and the black-clad child paused for a moment, her face turning seaward, a picture of wheeling gulls forming dimly in the far reaches of her memory. Then, from behind her, she heard another sound—a sound that to any ears but hers would have been lost in the roar of pounding surf.

It was the sound of laughter.

She had heard it all day today, and knew what it meant.

It meant her schoolmates had become bored with their games, and were going to focus their attention on her for a while.

It happened every year during the fall It seemed to her that each summer, when school was out and she seldom ventured beyond the beach and the bluff, the
children forgot about her. Then, come September, she would become for a while an oddity to be stared at, wondered about, talked about.

The first day of school she would hear the whispering in class as she came slowly in, tapping along, familiarizing herself once more with the steps, the halls, the doors, the rows of desks. Then there would be the terrible moment, the moment she always hoped would never come, when the teacher would ask her where she would like to sit, and arrange the classroom for her convenience.

That was when her torment would begin.

It never lasted long—in a week, sometimes two, they would forget her, going on to more interesting things, but the damage would have been done. She would spend the rest of the year in solitude, making her lonely way to and from school.

Often there would be a time during the year when she would have a companion for a while. One of the other children would break an arm or a leg, and for some weeks, while the injury mended itself, the girl would have company, someone to talk to, someone who would become suddenly interested in her problems. But then the wound would heal, and she would be left alone once more.

Now, as the sound of laughter floated to her ears, she knew this was the day they had chosen to follow her home, commenting in whispers that one of these days—a day that had never come—they would put a log in the path, and see if she could find her way around it.

She tried to block out the mocking sounds, tried to concentrate on the soothing roar of the surf, but behind
her the laughter grew. Finally she turned to face them.

There was no reply, only a giggle from somewhere to her right. In relief, she turned south, and began moving slowly homeward. But then a voice came from ahead of her.

The girl stopped, and prodded at the path with her cane. She found nothing and took a step forward, pausing again to read the trail with her stick. Still nothing. She had let herself fall into their trap.

She began moving forward again, but when the same voice came at her out of the blackness, telling her she was about to stumble, she stopped again, and again examined the path with the tip of her cane.

This time, as she prodded at the trail, their laughter burst around her, and she knew she was in trouble.

There were four of them, and they had positioned themselves carefully, one ahead of her, one behind, and two more preventing her from leaving the trail to make her way across the field to the road.

“You can’t stand there forever,” a voice said to her, “Sooner or later you have to move, and when you do, you’re going to trip, and fall off the bluff.”

She started to take a step, but again was stopped by a voice, warning her, mocking her.

“Not there—that’s the wrong way.”

It wasn’t the wrong way, she was sure of it. But how
could
she be sure? She was confused now, and beginning to be frightened.

The sea. If she could be sure which way the sea lay, she would know in which direction to go. She began turning, listening carefully. If the wind were blowing, it would be easy, but the air was still today, and the sound of the sea seemed to surround her, coming from every direction, mixing with the childish laughter of her tormentors, confusing her.

She would have to try. As long as she stood here, listening to them, letting them upset her, they would remain, enjoying their game.

That’s what she must do. Simply ignore them.

The cane made an arc in front of her, then another. The nerves in her fingers read the smoothness of the trail, and the unevenness where the edge of the path blended into the field.

The girl made her decision and began walking.

“Watch out! There’s a rock right in front of you!”

“You’re going the wrong way. If you want to get home, you’d better turn around!”

“Not that way! You’ll fall off the edge.”

“So what if she does? She won’t even see what’s going to happen to her!”

“Put something in the path! Let’s see if she can figure out what it is!”

The girl ignored them and moved steadfastly along the path, her cane reading the way for her, assuring her she was making no mistake. Around her, the disembodied voices kept pace with her, taunting her, challenging her. She forced herself not to respond to them, telling herself that they would stop soon, give up, leave her alone.

And then one of the voices, a boy’s voice, cut through to her.

“Better not go home! Your mama might be having company!”

The girl froze. She stopped waving the stick in her hand, and it hung in the air, quivering uncertainly.

“Don’t say that.” The girl spoke quietly. “Don’t ever say that.”

The laughter stopped, and the girl wondered if perhaps the children had gone away.

They hadn’t Instead, their laughter grew uglier.

“Going home to see the whore?”

“Hurry home, and maybe your mother will teach you how to do it.”

“My mother says she should be run out of town!”

“My daddy says next time he has two dollars he’s coming to your house!”

“Stop
it!”
the girl screamed. “Don’t you say that! It isn’t true!
It isn’t true!
” Suddenly she raised the cane, took it in both hands, and began swinging it As it whistled in the air, the children’s taunts jabbed at her.

“I heard he collects the money!”

“When I’m sixteen, can I visit your mother?”

The girl, her black dress swirling around her, the ribbons on her bonnet flying about her head, began moving toward the voices, the cane in her hands whipping back and forth, trying to silence their taunts. She stumbled, began to fall, then caught herself. All around her the voices sounded in her ears, ignoring her blindness now, and concentrating on the sins of her mother.