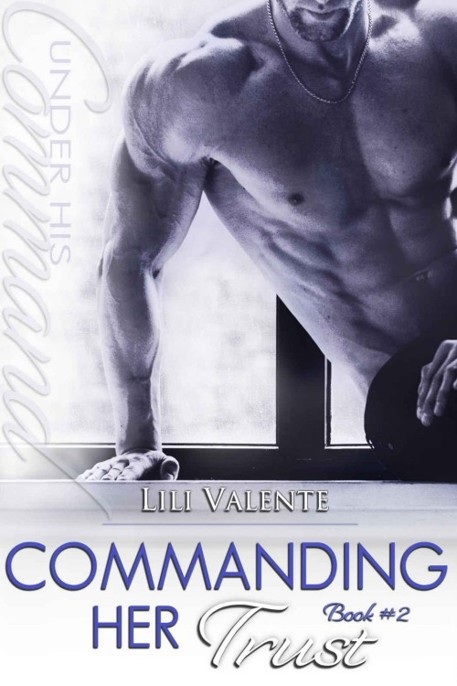 Under His Command: Book Two

All rights reserved. Without limiting the rights under copyright reserved above, no part of this publication may be reproduced, stored in or introduced into a retrieval system, or transmitted, in any form, or by any means (electronic, mechanical, photocopying, recording, or otherwise) without the prior written permission of the copyright owner. This erotic romance is a work of fiction. Names, characters, places, brands, media, and incidents are either the product of the author’s imagination or are used fictitiously. The author acknowledges the trademarked status and trademark owners of various products referenced in this work of fiction, which have been used without permission. The publication/use of these trademarks is not authorized, associated with, or sponsored by the trademark owners. This ebook is licensed for your personal use only. This ebook may not be re-sold or given away to other people. If you would like to share this book with another person, please purchase an additional copy for each person you share it with, especially if you enjoy hot, sexy, emotional novels featuring Dominant alpha males. If you are reading this book and did not purchase it, or it was not purchased for your use only, then you should return it and purchase your own copy. Thank you for respecting the author’s work. This book was previously published as Skin Deep by Anna J. Evans in 2009. It has been extensively revised and reworked before being re-released in serial romance format. Cover design by Violet Duke. Editorial services provided by Leone Editorial.

Dedicated to my early readers.

Thank you for your time, enthusiasm, and all around awesomeness.

Under His Command Book Two

*Warning:
This book features a Dominant alpha man who will push your boundaries until you beg for more. Read at your own risk.*

Blake Roberts is falling hard for his old flame and won’t stop until Erin is his. He doesn’t simply want her body; he wants her submission, her abandon, and the wounded heart she’s trying so hard to hide.

He wants all of her and he’s pulling out all the stops—in the bedroom and out—until she surrenders.

For Erin, what started as a charade has become all too real. She’s never experienced anything like the savage bliss she’s discovered in Blake’s arms. He tests her, dominates her, and if she doesn’t gain her freedom, soon he’ll own her—body and soul.

Cliffhanger Alert:
This steamy read ends in a cliffhanger. If you don't like being teased, steer clear. The entire UNDER HIS COMMAND series, Erin and Blake's complete love story, will publish in February and March of 2015.

Blake watched the ancient pickup pull off onto the gravel at the road’s edge and ran faster, determined to catch Erin before she got inside.

Before she took her life in her hands trying to get away from him.

It could be anyone in that truck. Some mountain man who hadn’t seen a naked woman in years, a couple of drunk teenagers who would take turns raping the woman they’d picked up on the side of the road before dropping her off on the streets of San Bernardino. Or there could be a bona fide psychopath driving the vehicle: a man who would have his fun with Erin and then kill her, dumping her body in the surrounding wilderness where it might never be found.

Or maybe the driver is a nice grandmotherly type who will buy Erin some clothes before taking her to the police station to file a report against the man who kidnapped her.

Ahead of him, Erin ground to a stop, heels skidding across the asphalt.

“Help me, please, I…” She trailed off as an obese man in tattered overalls leveraged his considerable bulk out of the driver’s side of the vehicle.

“You need help, darlin’?” He lurched forward, weaving his way toward the front of the truck, pursuing Erin as she backed away. “Happy to help a pretty thing like you.”

Despite the chances of being convicted of a felony, a part of Blake wished it
had
been a sweet granny in the truck. Now he was probably going to come to blows with a man, who looked like an extra from
Deliverance
,
to keep Erin safe.
And
he had a witness who might report what he’d seen to the authorities.

Not that it really mattered. If Erin decided she wanted to press charges, he wouldn’t try to stop her. Despite what the voices in his head had been telling him lately, he wasn’t a psychopath.

At least not yet. If this drunk did anything to Erin, however, he was going to lose what was left of his sanity in a memorable fashion.

“No one needs help.” Blake’s teeth ground together and something in his jaw popped as he watched one of the man’s meaty hands reach toward Erin’s chest. “Get back in your truck.”

“I wasn’t talking to you, asshole,” the man said, still leering at Erin. “Come here, sugar and let me keep you warm.”

“Get back in your truck,” Blake repeated as his fingers closed around Erin’s elbow. He pulled her behind him, shielding her nakedness with his body.

“Fuck off,” Overalls said, beady eyes narrowing on Blake’s face. “The lady asked for my help.”

Blake cursed himself. Why had he told Erin to take off her shirt before getting out of the car? She was irresistible enough clothed.

Of course, he hadn’t thought anyone else would see her. It was the middle of the night, for God’s sake, and most people knew better than to try to navigate the treacherous mountain roads after dark, especially after hitting the bottle. But he could smell the whiskey on this character from three feet away.

Which gave him an idea…

“All right, don’t get back in your truck,” he said with a shrug. “I can smell the alcohol on your breath from here. And I doubt this will be your first DUI. Put your hands on the hood.”

Blake heard Erin suck in a breath behind him as she caught on to what he was doing.

“I’m taking this one in for attempted prostitution,” he added, jabbing a thumb over his shoulder. “It won’t be any trouble to haul you into the station at the same time. I’ll get her cuffed in the backseat and come back with some cuffs for you, Mr.…”

“Uh um…Beam. Walter Beam,” the man said, backing toward the door to the battered pickup. “But I haven’t been drinking, officer. I swear.”

“Great. You can prove it when I get back with the Breathalyzer.” Blake turned around, urging Erin in front of him, whispering as he went, “Get in the backseat.”

“Prostitution?” she hissed, though she seemed relieved to have escaped “Mr. Beam’s” attentions.

Mr. Beam. It didn’t take much imagination to guess Beam was the brand of whiskey he’d been drinking, not the name on his license.

“I don’t know. What does a prostitute look like?” Blake asked, not surprised to hear the pickup roar to life behind him and tires squeal as “Mr. Beam” took off down the mountain like a bat out of hell.

“I don’t know, you’re the one who lives in Vegas,” she said, shivering as he opened the Expedition’s door and urged her inside. “That was a sad cop act, by the way. I thought you had your own television show. I expected better than ‘haul you into the station.’ ”

“It was a reality show. I just had to be myself, not act like anyone else.” Blake reached into the front for Erin’s bra and shirt and tossed them into her lap. “Put those on and don’t run away from me again. You could have been seriously hurt.”

“You’ve got to be kidding me.” The car’s overhead light illuminated Erin’s face, revealing the flush that heated her cheeks. “
I
could have been hurt?”

“What do you think Walter would have done to you?”

“I don’t know,” she said, with a frustrated huff. “Taken me back to town?”

Blake tipped his head. “Maybe, but not before he took advantage.”

“Took advantage?” She laughed as she finished up with her bra, but her hands were shaking as she reached for her shirt. “He might have copped a feel. At most.”

“He might have raped you,” Blake said, anger making his voice even deeper.

“He might have tried,” she said, returning his glare, making it clear she wasn’t scared of his angry voice. “But I can take care of myself, Blake. In case you don’t remember.”

“Then why didn’t you get in the truck with him?” he challenged. “If you were so sure he was a safe bet?”

“I guess I didn’t want to see what you’d do to the poor guy if I did,” she said, her eyes glittering in the dim light. “I mean, you’re the person who’s kidnapping a woman so he can make permanent alterations to her body. And you used to love
me
. Who knows what you might have done to some man you don’t even know?”

The bravado in her tone made him sure she was simply reaching for the words that would hurt him the most, but they still cut deep. The way she’d known they would. She wasn’t stupid, his Erin. Volatile, emotional, and often too impulsive for her own good, but never stupid.

“I did love you. Enough to believe everything you said to me the night before you ran away,” Blake said, careful to keep the emotion out of his voice. “And I don’t hate you now. I hope you know that. I don’t want to hurt you.”

“Tattooing someone against their will is bound to hurt,” she said, her voice still hard, though he’d seen the flash of guilt on her face when he’d mentioned the night she’d fled Carson City. “Literally hurt, and probably do a pretty decent job of destroying any
trust
you’ve built with the woman you fucked against the hood of your car.”

“Trust,” he echoed, letting the word linger between them. “Is that what this is about? You regret letting me dominate you?”

Erin’s eyes dropped to her fingers and she suddenly seemed very interested in the workings of the buttons on her shirt.

“Answer me,” he insisted. “Do you regret what we did?”

She sucked in a deep breath and let it out on a sigh. “No,” she mumbled, still not looking him in the eye.

“Then why did you run after we finished?” he asked, certain he was on to something. This wasn’t about her trying to get away from him because she was afraid or didn’t want her tat modified. It was about the power games they’d begun to play, the amount of trust she’d given him so readily.

The trust that had floored him, aroused him, and come closer to softening the walls he’d built around his heart than anything had. Anything or anyone, even Erin herself eight years ago. If he were a smart man, he’d turn the car around and take her back to Los Angeles right now.

No amount of ink modification was going to give him peace if he let Erin get under his skin again.

Too bad he was an idiot where this woman was concerned.

“I’m sorry. What do you want me to say?” Blake asked, ignoring the tightness that gripped his throat. “After we had sex?”

“Fucked would be fine. That’s all it was, right?” She looked up, her face carefully blank. “A little fucking between friends?”