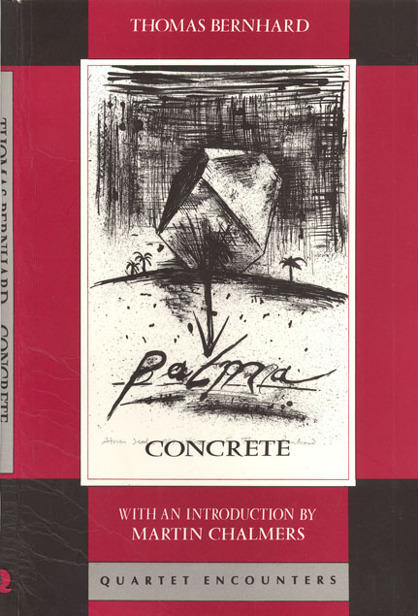 Instead of the book he's meant to write, Rudolph, a Viennese musicologist, produces this tale of procrastination, failure, and despair, a dark and grotesquely funny story of small woes writ large and profound horrors detailed and rehearsed to the point of distraction.

"Certain books—few—assert literary importance instantly, profoundly. This new novel by the internationally praised but not widely known Austrian writer is one of those—a book of mysterious dark beauty . . . . [It] is overwhelming; one wants to read it again, immediately, to re-experience its intricate innovations, not to let go of this masterful work."—John Rechy,
Los Angeles Times

"Rudolph is not obstructed by some malfunctions in part of his being—his being itself is a knot. And as Bernhard's narrative proceeds, we begin to register the dimensions of his crisis, its self-consuming circularity . . . . Where rage of this intensity is directed outward, we often find the sociopath; where inward, the suicide. Where it breaks out laterally, onto the page, we sometimes find a most unsettling artistic vision."—Sven Birkerts,
The New Republic

Translated from the German by

With an Introduction by MARTIN CHALMERS

A member of the Namara Group

Originally published in German as
Beton

This translation first published in Great Britain by

Few writers, and perhaps none in recent times, have staged their departure from the world with such a masterful sense of theatre as Thomas Bernhard. Success as a writer, fame and notoriety ensured that he was certain to avoid the final humiliations often inflicted on the poor and displaced. However, Bernhard, who had often been close to death since contracting pleurisy and tuberculosis at the age of eighteen, did not want his burial to be the occasion for another kind of humiliation. He was determined that there should be no hypocritical gestures of reconciliation over his dead body by an Austrian state and an Austrian literary establishment which he despised.

Thomas Bernhard died alone, of heart failure, on Sunday 12 February 1989, at his home in Gmunden, Upper Austria. By the time the municipal authority confirmed his death on Thursday the 16th the funeral was already taking place in Vienna. Apparently three people were present. The author’s testament was equally implacable. That no word of his literary remains was to be published is not a surprising demand from a writer who took such care with the ordering and correction of his texts; less common is the requirement that for the duration of legal copyright nothing he had ever written is to be performed or published:

This uncompromising, unforgiving statement from beyond the grave is a conclusive demonstration of the hostility between official Austria and the country’s most outstanding writers even if it can also be seen as an expression of injured love. The antagonism long preceded the chain of scandals and debacles, beginning in 1986 with the Minister of Defence’s welcoming handshake for a war criminal released from an Italian prison, which have soiled the cosy image of Austria. These events, above all the election of Kurt Waldheim as president and the allergic reaction of Austrian opinion to external and internal criticism, have seemed to confirm Thomas Bernhard’s intemperate vision of Austria as corrupt and mendacious.

In post-war West Germany, one of the roles assumed by writers was to act as a public conscience with regard to the crimes committed under the Nazis and to threats to civil and democratic liberties. On occasion, this role has brought conflicts with politicians and the state. There has nevertheless existed both a considerable degree of consensus on the legitimacy of intellectuals to speak out and a sphere of public debate in which they have participated.

One telling difference between West Germany and Austria as successor states to the Nazi-Reich was that Austria refused to regard itself as such. West Germany, of course, had no choice. Gerhard Roth, another Austrian writer, has suggested that the Austrians discovered that when they had been committing criminal acts they had been Germans. So, by becoming Austrians again after 1945, their consciences, Kurt Waldheim’s included, were clear.

Consequently, the Second Austrian Republic put considerable effort into constructing an identity which relied on ‘the Habsburg myth’ and the embalming of imperial Vienna’s cultural heritage. There was an avoidance not only of the Nazi period (and the divisive topics of exile and resistance) but of the First Republic as well, with its problematic features of civil war and clerfcal fascism. Music and literature — or rather their existence — were of fundamental importance to this identity. But since the whole edifice was fragile, and required so many subjects to remain taboo, the writers who emerged from the 1950s onwards and whose work was not safely historical or homely were viewed as disturbing threats to Austrian harmony.

A suffocating aesthetic conservatism was closely connected to other shortcomings of the Austrian scene: the lack of reputable publishers, of serious newspapers, of informed criticism. Austrian writers like Bernhard are largely published in West Germany, and frequently address their polemics on the state of affairs in Austria via the West German press. The limited possibilities for public debate have further contributed to the bitterness of the estrangement between Austrian writers and much of Austrian society.

Paradoxically, condemnation in the press and by representatives of the government helped bring writers to the attention of a reading public — often outside Austria.

Bernhard himself was not shy of making public interventions. (His revulsion at Nazism and Catholicism and what he saw as their continuing influence on Austrian attitudes was almost matched by his contempt for Social Democracy and state-subsidized writers.) Nor did he tire of varying his expressions of disgust at Austria. In
Concrete,
for example, which was first published in 1982, there’s a long passage, with something of the tone of a sermon — or a jeremiad — in which the narrator, while he prepares to leave Austria for a stay in Majorca, reflects that he is merely leaving a country whose lack of intellect no longer makes a man like himself despair but only vomit, and whose condition is simply that of Europe’s uncleaned latrine.

Of course, there is much more to Bernhard than a critic or satirist, however brilliant and vituperative, of Austrian and German circumstances. He and his work, in any case, elude political classification — ‘conservative anarchist’ has been one tentative description. Bernhard is a great writer for the breathless intensity with which he delineated inner geographies, the unceasing monologues inside our heads, and his marking both of the power of words — not least over the readers of his prose — and of the limits of words, their inadequacy as a means of communication.

Concrete
presents a familiar Bernhardian situation. The narrator, a sickly scholar of private means, is unable to complete, in fact unable to begin even the first sentence of the definitive study of Mendelssohn which he has been preparing for more than ten years. More than three quarters of the book, itself a single almost uninterrupted monologue, advances reasons for not having begun to write, takes them back, modifies, corrects and then contradicts them. Every kind of distraction is, or may be, or may not be, responsible. ‘Probably I have only again and again been unable to begin my work, because the books and writings on my desk were not properly arranged … ‘ is in the end perhaps the narrator’s most convincing conclusion.

This calculated humour is a feature of Bernhard’s writing which is sometimes ignored by English-language critics who see only apocalyptic gloom and nihilism in his work. Bernhard is frequently and unexpectedly funny, as here in a novel whose flow of writing about the impossibility of writing is provoked and qualified by the narrator learning of the suicide of a person whom he barely knew.

But more than that, Bernhard’s whole mode of address resembles that of a comic. A stand-up comic who buttonholes the listener’s attention with a sentence, an unending sentence, draws the listener in, without the latter quite understanding where these
non sequiturs,
alarming exaggerations, bare-faced denials are leading until the listener (the reader) finds himself entrapped within a verbal construction with new and unfamiliar rules of logic from which there is no escaping until the narrator-comic’s telling telling telling, which is both a curse and relief, runs out of breath. Common to both Bernhard and the comic is the reliance on, and play with, reported speech, and a constant balancing between control over words and the risk of words running out of control.

The narrator in
Concrete
describes himself as ‘tiresome, unbearable, sick, in the truest sense of the word, impossible’, and that is how Bernhard himself has been seen. Yet, one perceptive critic concluded his obituary with the remark that Bernhard was ‘probably … the most loved author of our time’. That this was more than formal piety towards a writer who not only appeared to be ‘unbearable’ but in whose stories and novels current vernacular, dialogue, description, character-drawing, action and sexual love are largely absent is due in part to his comic aspect, his verbal clowning.

There are other reasons why the word ‘love’ is not such a misplaced characterization of the relationship between Bernhard and his readership. One is the constant reminder of physical vulnerability which his work conveys, and a sense of the oddity of the juncture of thinking head and decaying body.

Bernhard wrote against death — outran death — With such an unparalleled gusto and combativeness that it is sometimes possible to forget or miss the presence of compassion and sorrow. Perhaps the most important element of that sorrow is a note of mourning for what children lose in becoming adult.

In
Concrete
Anna Härdtl is a young woman from Munich whom the narrator, Rudolf, remembers meeting. She related the circumstances of her husband’s suicide while on holiday in Palma. Her life appears to be ruined because of a child-like confidence that adulthood will turn out as it is supposed to be. In an earlier novel,
Gargoyles,
the narrator who is accompanying his father, a country doctor, on his rounds notices a group of schoolchildren in a restaurant. ‘They were given hot soup and admonishments not to make noise. What gruesome people these innocent creatures will inevitably become, I thought as we left the restaurant.’ The tragedy is both that children grow into gruesome adults and that those who are unable to do so are destroyed.

In Bernhard’s novels childhood is usually only present as a need, as something missing rather than fulfilled. A need which is thwarted by the indifference, if not positive antagonism of adults. (The absence can also be described as a need to belong somewhere, a need for home-ness.) However, in his autobiographical writing Bernhard was not afraid to use such words as ‘paradise’ and ‘idyll’ of his early life in the countryside and in the town of Traunstein -before school, a Nazi-Catholic education system, war and illness. And in an interview he admitted, ‘Nevertheless, it was a happy childhood, probably, certainly even.’ This respect for childhood and its investment with a degree of Utopian light brings Bernhard, in this respect at least, close to the grand old Marxist Utopian Ernst Bloch. (In the novel
Corrections,
the central figure, Roithamer, is described as constantly having his most important books — which always remained the same — ready to hand: ‘Montaigne, Novalis, Hegel, Schopenhauer, Ernst Bloch…‘)

Do You Love Football?! by Jon Gruden, Vic Carucci
In Shelter Cove by Barbara Freethy
Take the Monkey and Run by Laura Morrigan
Cowboy Sandwich by Reece Butler
Christmas Kisses by H.M. Ward
To Hell on a Fast Horse by Mark Lee Gardner
The Companions of Tartiël by Jeff Wilcox
Come Dancing by Leslie Wells
Aegis Rising by S.S.Segran
[Psy-Changeling 12.1] Hide and Seek by Nalini Singh