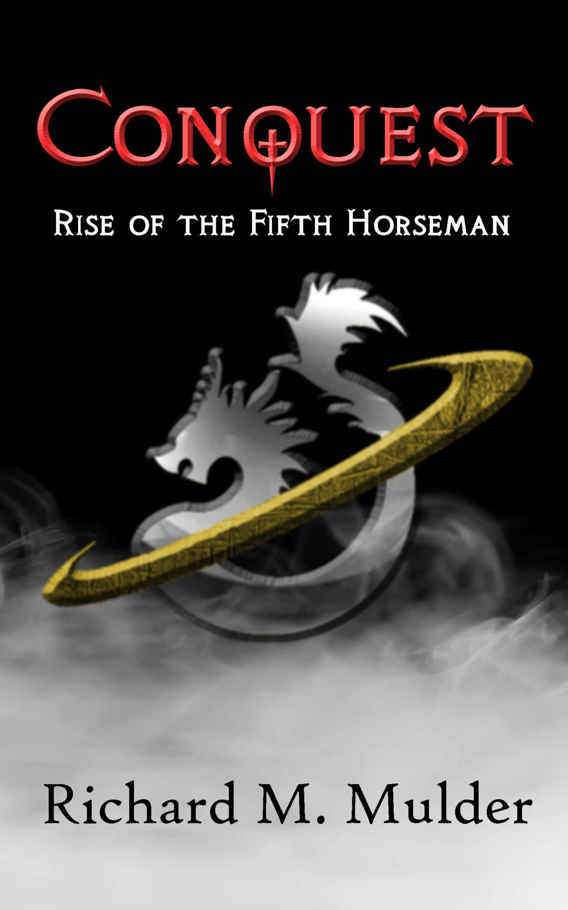 Remember to go to RichardMMulder.com to sign up
for sneak peeks and giveaways!

CONQUEST:
RISE OF THE FIFTH HORSEMAN

All rights reserved. Except
for the use in any review, the reproduction or utilization of this work in
whole or in part in any form by any electronic, mechanical or other means, no
known or hereafter invented, including xerography, photocopying and recording,
or in any information storage or retrieval system, is forbidden without the
written permission of the author, Richard M. Mulder.

This is a work of fiction.
Names, characters, places and incidents are either the product of the author’s
imagination or are used fictitiously, and any resemblance to actual persons,
living or dead, business establishments, events or locales is entirely coincidental.

This edition published by
arrangement with Richard M. Mulder, Author.

For questions and comments
about the quality of this book please contact us at
[email protected]
.

For my
dearest Alicia Ann

Thank
you for all of the sacrifices you have made
to make this book come to light. I love you.

Chapter
One: Shadows of Darkness

Chapter
Thirty One: Unto Dust

Chapter One: Shadows of Darkness

In
the beginning God created the heaven and the earth. And the earth was without
form, and void. And the Leviathan was upon the face of the deep: the darkness
that doth corrupt all life and desireth to obliterate all light...

The
voices in his mind were barely a whisper now, but they were always present. It
had taken him hundreds of years to subdue them, and he feared that his true
intentions would soon be discovered. Though Timur Demyan had long ago yielded
up his soul unto the Leviathan, he still followed his own agenda while he
fulfilled the will of his Master.

Timur
hid in the shadows of the park, slipping through the darkness from one shadow
to the next. His prey walked quickly with eyes darting to each side like a bird
weary of predators. A frantic look of desperation was plastered over the man’s unshaven
face as he flipped open his cell phone.

“Come
on…” he heard Jason Bridger murmur to the phone as he approached the fountain, “Answer
already!”

“Allan,
this is Jason. I know we haven’t spoken in a long time, but I need your help. I’ve
stumbled across some disturbing information that involves one of your firm’s
clients. I need to speak with you in private immediately. As soon as you get
this, meet me on the east side of Buckingham Fountain. There’s little time.”

The
instant Jason ended the call, Timur stepped out of the shadows, “Indeed, you
have very little time.”

Jason
spun around with his concealed pistol cocked and ready, “Back off, old man!”

“Ah,”
Timur limped forward with his cane in his crippled right hand while he
brandished a handgun with his left, “Not until you return what belongs to me.”

“I’m
not letting you get away with this.” Jason shook his head adamantly.

“This
scene is all too familiar.” Timur chuckled as he cocked his handgun and aimed, “This
is exactly how your colleague died.”

Without
a second’s hesitation, Jason pulled the trigger. Timur fell backwards with the
sudden impact that hit him in the face. Seconds later a strange greenish glow
surrounded his body, and then he disappeared. Jason’s eyes grew wide, and then
a bullet ripped through his abdomen. And then another through his chest.
Clutching the wounds, he absently dropped his pistol as he fell to his knees.

Timur
reappeared from another shadow and the strange glow around his body began to
dissipate. He approached with a silencer affixed to the tip of his handgun and picked
up the thumb drive that had fallen out of Jason’s hand.

“As
I said earlier, you indeed have very little time.” Timur sneered as he placed
the tip of his handgun against Jason’s forehead, “And I might add, your friend Allan
has very little time as well.”

An Improper Deal (Elliot & Annabelle #1) (Billionaires' Brides of Convenience Book 3) by Nadia Lee
Death at the President's Lodging by Michael Innes
Blowback by Stephanie Summers
Only a Shadow by Steve Bein
Undead by Frank Delaney
Dare to Trust by R Gendreau-Webb
Delay in Transit by F. L. Wallace
A home at the end of the world by Cunningham, Michael
Lady: Impossible by Fraser, B.D.
Maximum City by Suketu Mehta