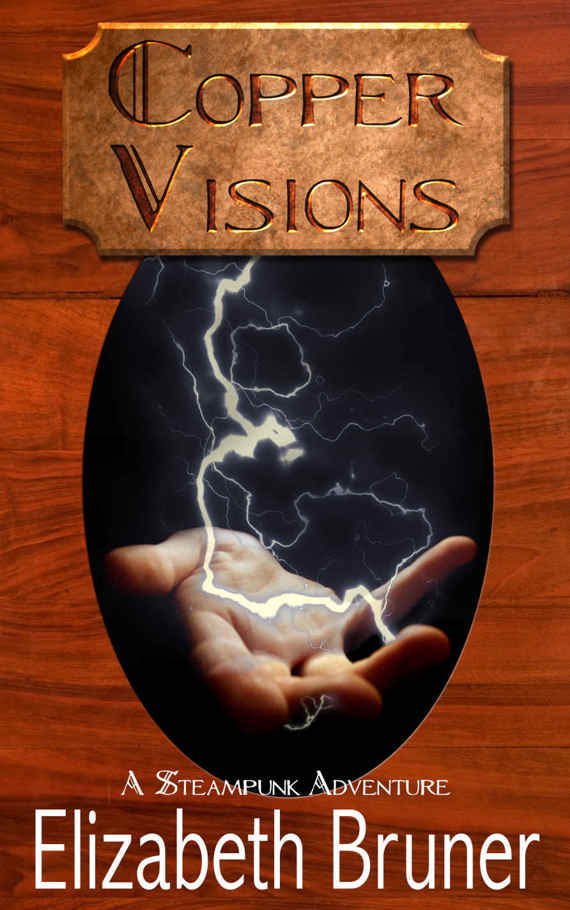 Chapter 4 - Off Her Leash

Chapter 11 - In the Hospital

Chapter 12 - A Tour of the Laboratory

Chapter 13 - Sins of the Father

Chapter 16 - A History of Problems

Chapter 17 - Down a Dark Alley

This is a work of fiction. Any resemblance to persons, living or dead, is a coincidence.

“Everybody has a bad first day at work sometimes, right?” Sophie said to herself as she walked down the street. “I mean, it’s not like I meant to do it. He’ll understand. He’ll help me, even if he’s mad at me, he’ll help me.” Sophie took a quick, worried look at her ankle to confirm the light was still the yellow-orange that meant she was safe.

As she knocked on the door for David’s home, she looked around her nervously. She was technically out of range of her own apartment, though only by a few inches. As long as she was in the open, she was safe. Thankfully, this street was one of the few known for being quiet in this part of town. It was genteel if worn down, on the edge of poverty but with enough pride to insist on respectability.

The silver man who opened the door did not look happy to see her. “Sophie,” he said. “What are you doing here?”

His face was immobile while he studied her;
dark blonde hair cut just below her ears, worn gray skirt, off-white shirt waist with the sleeves torn off to keep them from catching in the gears of her metal arms, a m
an's gray vest for modesty and worn boots that had once been black. Of course, his face was usually immobile unless he was actively using it or trying to put the people around him at ease. David was a robot, an automaton built by a mad genius who had declared he knew the secret to creating life. Whether or not David was alive, he was certainly sentient and, as far as anybody could tell, free-willed.

“Come inside, Sophie,” he finally said, his face suddenly animated.

“I can’t help you if I don’t know what the problem is and I would assume you don’t want to discuss it on my front stairs.”

“You’re right, I’d rather not discuss it out here but I can’t go inside your apartment, either.”

“Why?” His eyebrow raised with the question and he watched her grow increasingly more uncomfortable.

Sophie looked around and bared her ankle to him, showing the manacle that was attached, it's yellow-orange light shining sickly at them.

“What is that?” David tilted his head to get a better look.

“They gave it to me when I left the hospital. It's got something to do with my arms, the doctor said.”

“What does it have to do with your arms? Why would something attached to your ankle have any effect on your arms?”

“They don't work on their own. The doctor has to put some green stuff in a thing on my back so they'll keep working. He says he needs to be able to find me when it's time to put more of the green stuff in.”

“Why doesn't he just make an appointment?” David asked?

“I don't know, David,” Sophie said. “It waslike this when I woke up from the surgery. They just told me if I got too far away from my rooms, the power-source for the light wouldn't be stable and it would explode so can you please come with me?”

“You'll tell me what happened on the way there?”

“Very well,” David said. “Give me a moment to accompany you.”

She stood out like a sore thumb, waiting at the front stairs like this. As a guest, she should have been inside in his parlor. If she was a servant, she would have been let in to wait in the kitchens. Most people in this part of the city were more aware of each others business than the people in her part, even though they were only separated by a few streets. Commerce wasn't allowed in this street, tradespeople and carts with deliveries being sent around to narrow alley's behind the houses where everybody's servants could see what was going on without appearing to be loitering. David was the only 'person' living in these apartments, which were actually more like a very narrow house than the rooms she was renting. He might have a woman come in to clean occasionally but she'd never seen anybody working here.

Sophie stood nervously on the stairs, waiting for him to re-emerge from his apartments. When he came out, he was wearing a long coat and a hat with a wide brim. While the disguise didn't hide the fact that he was an automaton, it did obscure the most nonhuman of his facial features so people passing him casually in the street wouldn't stare. He locked the door behind him and offered her his arm. Sophie was careful not to clank her metal arm against his and they set off back to her apartments.

“Tell me what happened,” David said, nodding a greeting to a man staring at them. People in the nicer part of the city always gawked when they saw him and Sophie wondered briefly why he insisted on living there.

“You know how it's hard to find work for a girl like me,” she started. “What with the arms and all?”

David nodded that he understood.

“I don't think it's something the doc thought of when he decided to give me new arms after the accident. I mean, I have a little education what with the charity school all us girls had to go to on Sunday and all, them reformers saw to that. A half-day off and they rounded us up to go sit and learn. Only thing worth going for was they fed us. Well, I'd trade all that education for some arms, real ones, human ones, and make no mistake. Because no one will hire a girl with metal arms even if she can read and write and figure, specially not folks around here and I ain't never lived nowhere else and couldn't move now if I wanted to.”

“I'm aware of the prejudices of our neighbors,” David said. “That doesn't explain why you've come asking me for help, and what you want help with.”

“I'm just explaining why I did it, right? When a bloke comes to me, offering me work, I'm not really in a position to say no, right?”

“I suppose that would be an accurate description of the situation.”

“So, when a bloke comes to me, dressed nice as you please, saying he's heard of my predicament and offering to arrange meetings between me and well-heeled chaps what like a girl like me, what's a girl to do?”

“Sophie, did you become a prostitute?”

“Not as such, no,” Sophie said, her shoulders bowing as much as they can with guilt. “Not as such. I was just supposed to be agreeable to the gentlemen. Listen to them talk, answer questions and such-like.

“I see,” David said. “And how many clients have you had?”

“This was the first one.”

“It was an accident!” she said. “I made him some lunch to show him I could cook! He choked on a bite and I came around to help him and when I was trying to force it back up the way I saw the doctor's showing in the hospital, I heard something crack and he stopped moving. He wasn't breathin' David!”

They walked along in silence for a block. They were closer together, some showing the faults in their foundations and beginning to lean across alleys to their neighbors. The people were packed closer together as well, leaning in to talk to their neighbors and watching the mechanical strangers in their midst. Some women made signs against the devil when they thought no one who would judge them was looking.

“So you have come to me for what, Sophie?”

“I can't have a dead body in my apartment, David! And I can't get out of here far enough to throw him in the river. “

“You're asking me to help you get rid of a dead body.” David said, looking over at her worried face. “Why don't you call the police?”

“What? And go to jail for an accident? He was a toff, David, I'm sure of it. Any coppers who'd come down here would arrest me just for spite, or an eye to a promotion if they're smart. No way any of 'em would think it was an accident.”

If David was human he would have sighed. “I'll have a look, Sophie, but I'm not certain getting rid of a dead body is the best idea.”

They turned down the street to her apartment and Sophie reached for the key to her door. Her appearance made less of an impression on her neighbors but they stared openly at him.

“If you were hoping to not make a scene, you might have called one of your human friends.”

“Don't have any since the accident. Anyway, people round here don't call the cops. They might answer questions if money's involved but they're just as like to give the wrong answers as not, just to be contrary.” Sophie led him to the door of the building she was rending rooms in then led him down the stairs to the cellar.

“It's cheaper than the attic. Besides, the doc's told me to take it. Said it was good for my convalescence and the power for my ankle thing.”

She unlocked the door then stopped in shock a few feet into the front room. There was an unobstructed view of the dining room. Everything was exactly where she'd left it except for one thing; the dead body was missing.

There doesn't seem to be a body here," David said, looking around the apartment. "Did you hide it?"

"Why would I hide the body? He was right here, at the table. He was laying on it! I left him lying there when I went to get you."

"Well, he's obviously not here now. Could you have been mistaken?"

"He was dead, David. I heard one of his ribs break and he stopped breathing. There was no mistaking that."

Semper Fi by Keira Andrews
The Mark of the Assassin by Daniel Silva
Rock Star: The Song (Book 1 of a Bad Boy Romance) by Kate Ward
Office Perks by Monica Belle
Angel Unaware by Elizabeth Sinclair
Inheritance by Simon Brown
Cross My Heart by Abigail Strom
Kiss Across Swords (Kiss Across Time Series) by Cooper-Posey, Tracy
Magic in the Shadows by Devon Monk
Under Construction by J. A. Armstrong