Read Count to a Trillion Online

Count to a Trillion 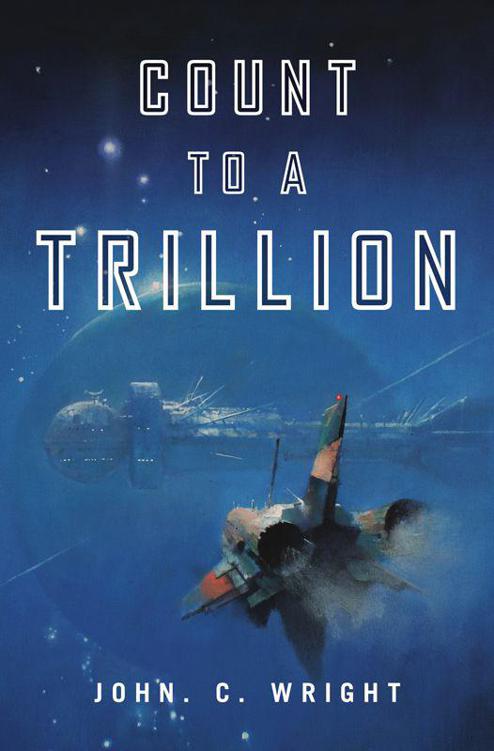 Part One: The Swan Princess

Five:
The Brotherhood of Man

Ten:
The Fatherhood of Man

Fifteen:
Equality of the Sexes

Many a night from yonder ivied casement, ere I went to rest,

Did I look on great Orion sloping slowly to the West.

Many a night I saw the Pleiads, rising thro’ the mellow shade,

Glitter like a swarm of fire-flies tangled in a silver braid.

Here about the beach I wander’d, nourishing a youth sublime

With the fairy tales of science, and the long result of Time.

The future did not arrive.

Overhearing his elders talk, no one seemed to know what the holdup was. Grown-ups occasionally made jokes about flying cars and rocket packs and moonshots, and shook their heads, and then talked about horse breeds and plague vectors and prevailing winds, and someday-soon rural-electrification plans, next-year-for-sure or whenever Houston had the know-how to repair the pre-war power grid. Even his earliest memories had the murmur of conversation in the background of a glorious yesterday, and glorious tomorrows; but there was nothing but chores in the cold today, for all this talk.

Young Menelaus Illation Montrose told himself he would fix the jerk who’d stopped those bright and shining tomorrows from getting here, if he ever laid eyes on the fellow. It had to be someone’s fault. Stood to reason.

At that age, when one reads the books that live in one’s heart forever, Menelaus quite by accident came across in his library a cartoon of stark colors and convincing depth-illusion, which some writer of two hundred years ago had composed. It was a strange cartoon, unlike anything young Menelaus read in study, for each episode ended happily, not just in one, but in all possible episode results.

At first he thought it was an historical, since it was set in the last years of the Twenty-First Century, so long ago, but his older brother, Agamemnon, told him with a sneer that it had been “futurism” when first written.

He would not later remember much of what the characters had been doing, which seemed to involve stumbling across yet another lost race on yet another new planet that had slid back down to barbarism, having a crewman or two gunned down by space-pirates or eaten by vampire-plants, then having the Captain go ashore, flirt with an alien girl, and get into a knife-fight (that even to Menelaus’s unpracticed eye looked wide-gestured, slow and inefficient, meant for show). The lost race was always doing something dumb, like worshipping a computer or sacrificing maidens to a half-broken robo-tank on autopilot, which was not a dragon at all. Each episode always ended with the space-barbarians vowing to mend their ways, free their slaves, and study science.

No, it was not the doings in the cartoon dramas he recalled.

It was the shining promise glowing from the simple 1024-color images, the prophecies and the predictions; that was what he recalled.

Here were artificial intelligences with godlike wisdom; man designed by man, and superman redesigned by superman to become creations more superhuman yet; there were the stars within mortal reach. The future people lived without poverty or property, and all the beautiful girls made love to everyone, male and female alike, without marriage or jealousy, because what was sin in all the previous eras was licit for them.

Time travelers visited the future people from a time more future yet, and told them how at the end of the world was the Rapture, and the souls of all the perfected people were floated into giant space mainframes, to live as pure spirits, immortal as gods; and even older time travelers from the farthest future of all showed how at what seemed to be the end of time, the Second Law of Thermodynamics was overthrown by the machine superintelligences, and the universe itself lost its mortality, so that this was merely the opening of gates of gold into tomorrows even more splendid.

Years later, he still recalled the name, and flourish of ever-rising notes that went with the opening frame. The cartoon was called
Asymptote
.

His brother Hector showed him the secret plot-twist on level sixteen to unlock the adult portions of the script, so Menelaus could watch the future women prancing in their underwear. Solving the encryption was no problem for Menelaus: all the public keys were products of two hundred-decimal prime numbers, which Menelaus could factor in his head.

The other thing he remembered was that his mother caught him reading the forbidden material, and she rolled up the shining fabric of his library so that it was like a stiff switch of rainbow-flickering lucent glass, and bent him over the kitchen stool.

It was one of the last times his mother ever took a strap to him.

One reason why he had a library of his own, and his brothers had to share theirs, is that he was good with figures and such, better than most grown-ups. Aunt Bertholda once tried to shut up the whole room of them by setting him and his brothers to adding up all the numbers between one and one hundred. She had been hoping for an hour of quiet. Menelaus had simply folded the number line in half in his mind, noticed that every one of the fifty pairs added up to one hundred one, and multiplied one hundred one by fifty. That left him with fifty-nine minutes to play outside while his older brothers puzzled and fretted and punched buttons on their library sheets.

That library cloth was his pride. He loved it, loved the way it caught the light, loved its flexibility and ruggedness and memory capacity.

He remembered that the kitchen stool was between the hearth-cell and the window. The hearth-cell gave light and heat to the kitchen, fueled the upright stove, and fed the cable that led to the barn where the cream-separator hummed. The window, which had come from his grandmother’s house in Austin, was an antiseptic permeable surface that even when open changed the smell of the forest and flowers outside into something that stung in the nose. In those days, the Pestilence of the Jihad was still within living memory, and grandfathers with breathing plugs in either nostril still showed callow youths the scars where their disease-ridden lung tissue had been removed.

Over that stool in the kitchen he bent, beneath his grandmother’s funny-smelling window. His mother’s arm rose and fell as she spoke in her dispassionate, precise voice, and each exclamation point was another stroke. “Will you yet defy me, child? My rules are clear! You are to have no pixies, no streams, no games!” This meant text only could be stored in his schooling; no visual or audio files, no interactives: only books.

“The horrid noise you call music must go,” she said. “Music shapes the soul, and misshapen music misshapes it. No idle story-files; lectures and tests and text I allow, nothing else!”

“What about Shakespeare?” When she was done, he spoke. His voice was quivering with sobs, but even young as he was, pain did not make him hold his tongue. “Dad would have liked it. He’s scholarly, Shakespeare. Anglos and Noreastermen read Shakespeare! I can store a play, can’t I? See the costumes, spy the actors?”

“Spy the actresses, I deem. I would be more inclined to credit your uncharacteristic interest in the classics, were there not a program here for reproportioning Ophelia. Are we taking up the study of anatomy? No, I think not. Text is what you will read, and you will learn to exercise your imagination, even if you are the only member of your generation to do so. Were I able to beat an imagination into your brain with a strap, my arm would not tire night and day, I warrant you, child of mine.”

For some reason, it always unnerved him when she called him “child of mine”—as if he were livestock, something that belonged to her, not him.

She gave him one last lash across his back, “to help to concentrate him” and muttered, “You already dispute as well as any lawyer: were it not that I see the fire of genius in you, such as comes but once a generation, I would take this whole library from you, and raise you as unlettered as any Migrant. Go ahead, glare at me! It is your father’s glare; I would not beat it out of you.”

Still holding back his tears, he stood straight and held out his hand, and asked his mother politely for his library.

He clutched the shimmering fabric in his little fists, seeing the icons of his music files floating in the cloth. Menelaus stood breathing in and out, not crying, but not moving his fingers toward the control spots either. For a moment, he did nothing. His mother stared down at him, silent and sardonic as an old gallows tree. She did not bother to speak, but waited.

So much time, so much effort, had gone into finding those files! Everything he had scalped or smuggled in from friend’s libraries, or swapped with the rough-looking Oddifornians who lazed around Belle’s Bar, betting on cockfights, never working. His brother Achilles said he would catch ailment from the dirty Oddlings, and he didn’t know if Achilles meant a file bug or a bioterror bug.

Once Menelaus did Sam Feckle’s wood-chopping chores for a week, just to get the full-length variable-output version of a dance tune he heard floating from a tiny plug in Sam’s ear during Meeting, when Sam should have been hard praying. All that work, for nothing, now.

All his tunes, his precious songs and jingles, ringadings and roundelays, gavottes and jigs, flickered and vanished on the screen as Mother watched him reluctantly scratching the little icons, one by one, into oblivion. She did not tell him to select and delete the whole lot with one finger-stroke. She just watched.

Some of the Mexican and Injun music, the
ranchera
and
corrido
, the
garifuna
and Ghost-Dance, the jazz and buy-me jingles for the Gambler Princes was stuff to make his heart rise up like a lark, beating its wings in the dawn-beams while the world below was still black: that was what the music was to him, or Paynim tunes with their lutes and clashing finger-cymbals, buzzing reeds, and wailing were opulent as wine, even if he did not know the words.

There was no kind of song he did not like: Menelaus could see the patterns of the music in his mind. He had a knack to envision the systems of notes and chords into number-expressions and higher-order functions: he could lay with his head on the cloth, stereo-audio coming from different sensitive regions of the fabric, and close his eyes, enter a pure realm where everything was made of numbers. He could soar.