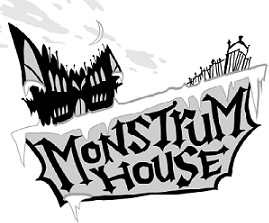 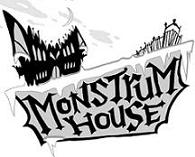 All rights reserved. No part of this publication may be reproduced, stored in a retrieval system or transmitted in any form by any means, electronic, mechanical, photocopying, recording or otherwise, without the prior written permission of the publishers and copyright holders.

Design and illustration by Simon Swingler
Typeset by Ektavo

Author dedication:
To Jugs, because Trapper and Scout can't read

Jasper McPhee looked at the door. It looked just like a normal classroom door. But he knew that on the other side of it was a room that was anything
but
normal.

Jasper pushed open the door and stepped inside the pitch-black room, flinching slightly as the door swung shut behind him. He knew what was waiting for him in the dark. It took all his willpower not to run straight out of the room again.

His eyes had adjusted to the gloom now.

He could just make out the Quiddlesquawk slinking towards him. It crept low along the floor. It was close enough for him to see the glowing red slits of its eyes in the darkness. Jasper took a deep breath and shook the fear from his body.

The trick was to stay still and not panic.

Jasper could feel a buzz of excitement beginning to shoot through his body. The monster moved even closer. But Jasper wasn't frightened anymore. He was ready.

Jasper could feel the weight of the rope in his Hunt belt. He went into Hunt position. Legs slightly bent, arms spread, every muscle quivering in readiness. He clenched his teeth and then leapt, springing up and over the monster's head.

He landed squarely on the monster's back, his head facing towards its tail. He wrapped his arms around its slimy scales, trying to move into a better position. But before he could get a proper grip, the monster rolled, pinning Jasper underneath it. 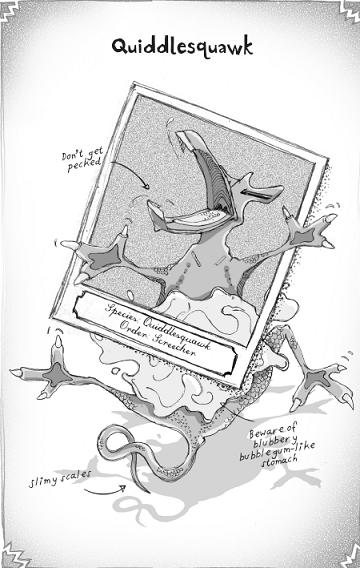 Jasper had learnt enough about Quiddlesquawks in Species Studies to expect it to roll. But learning about a monster and actually catching one were two very different things.

As the monster got ready to suffocate him under its blubbery bubblegum-like stomach, Jasper snaked his arm towards its eye socket. He didn't want to think about its eyes. Monster eyes always freaked him out. And he knew that fear was exactly what the Quiddlesquawk wanted him to feel.

Jasper poked his finger sharply into the monster's eye. It squawked angrily, twisting its head around and snapping its razor-sharp beak at his hand. The shift in the monster's weight was just enough for Jasper to slip out from under it.

Within three seconds, Jasper had grabbed the rope from his Hunt belt and bound it around the monster's beak. He strapped its beak to its body, then flipped the monster onto its back.

âYour score is eighty-four per cent,' Stenka's severe voice announced over the intercom. âProceed to the exit.'

Stenka was Jasper's homeroom teacher. Of all the teachers at Monstrum House, Jasper reckoned Stenka was probably the scariest. It was not a good idea to get on her wrong side.

Eighty-four per cent,
thought Jasper, wiping the slime from his hands.
Not great â but not
too bad
.

He already knew where he had gone wrong.

He hadn't thought about the slipperiness of the monster when he'd leapt.

Jasper bent down to inspect the monster. He almost felt sorry for the thing. After all, he knew the Quiddlesquawk had been trained by the teachers. And really, what kind of life was it, battling annoying kids all day long?

Jasper forced himself to look it in the eyes. One eye looked sore and bloodshot.

âSorry, fella,' he whispered. He loosened the rope he'd tied around its beak.

The monster blinked and for a second its empty eyes took on a deeper glint of understanding. Then it opened its mouth and spat a long line of slime over Jasper's face. Jasper gagged.

âNext time you should do as you're told,' said Stenka smugly over the intercom.

Jasper glared at the monster. There was a foul fishy taste in his mouth and his eyes stung like they were full of soap.

âThanks a lot,' he mumbled darkly, and left the room.

Jasper had been at the Monstrum House School for Troubled Children for about six months.

Monstrum House was not like any school Jasper had ever been to, and he'd been to a lot of schools. At this school, instead of learning how to read, write and do maths, the students were only taught one thing: how to hunt monsters.

The school building was an old stone mansion with towering turrets and plate-glass windows, surrounded by a spooky dark forest. None of the kids knew exactly where the school was, or even which country it was in. They had all been flown to the school in some kind of hypnotised sleep, and had no idea how far from their homes they were. But wherever they were, it was cold. Not just cold â freezing. It snowed all the time. And the area was crawling with monsters. Jasper wondered if the monsters somehow created the chilly weather â whenever they were about the temperature seemed to drop.

Jasper hadn't yet worked out if he was more scared of the monsters or the teachers. He was pretty sure the teachers at Monstrum House could read his thoughts. They had a spooky way of knowing what you were thinking. And of course, if you did anything wrong, they could tell â and you'd be punished.

Jasper had been expelled from every school he'd ever been to. He was used to school punishments. But at Monstrum House, being punished didn't mean picking up rubbish or writing lines. It meant running through a forest in the middle of the night with dogs chasing you. Or being locked in a room with something terrifying, something bloodcurdling, something hideously ugly. And it wasn't Stenka.

Hunting monsters was
exciting
. And
that
is what gave Jasper a buzz.

Jasper was staring at a fly.

He still couldn't get the fishy taste out of his mouth. His friend Felix had suggested rubbing his mouth out with soap â but all that'd done was make him throw up. His friend Saffy told him never to feel sorry for a monster again.

Mr Golag, the Mental Manipulations teacher, was lurching up and down between the desks. He was a hairy, thick-set man with a hunched back and a lumpy face.

â
Be
the fly,' he wheezed. âFrom understanding comes control.'

Everyone sat silently at their desks, staring intently at the flies trapped under the glass jars in front of them.

The classroom was gloomy. It was only lit by lamps, as Mr Golag didn't like bright lights.

At one time Jasper would have thought that spending a whole class sitting in a dimly lit room staring at flies was boring, but not now. After months of nothing but reading and theory, Mental Manipulations class looked as though it was finally about to get interesting.

Jasper knew that of all his classes, Mental Manipulations could turn out to be the most important. Although they were only starting off with flies, by third year they would be learning how to mentally manipulate monsters, and
that
would be seriously cool.