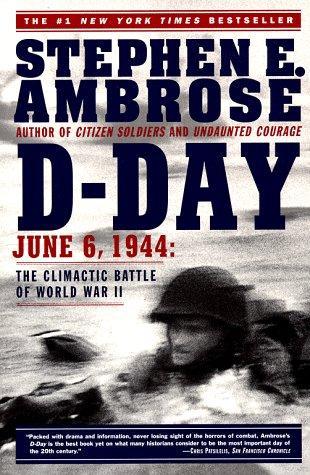 Tags:
Military History, France, War, Europe, European history, Second World War, Campaigns, World history: Second World War, History - Military, Second World War; 1939-1945, Normandy (France), Normandy, Military, Normandy (France) - History; Military, General & world history, History, World War; 1939-1945 - Campaigns - France - Normandy, World War II, World War; 1939-1945, Military - World War II, General, History; Military, History: World
SUMMARY:
Stephen E. Ambrose draws from more than 1,400 interviews with American, British, Canadian, French, and German veterans to create the preeminent chronicle of the most important day in the twentieth century. Ambrose reveals how the original plans for the invasion were abandoned, and how ordinary soldiers and officers acted on their own initiative.D-Day is above all the epic story of men at the most demanding moment of their existence, when the horrors, complexities, and triumphs of life are laid bare. Ambrose portrays the faces of courage and heroism, fear and determination -- what Eisenhower called "the fury of an aroused democracy" -- that shaped the victory of the citizen soldiers whom Hitler had disparaged.

Dr. Forrest Pogue began the process of collecting the oral histories of the men of D-Day on June 6, 1944. He was a sergeant (with a Ph.D. in history) serving with S. L. A. Marshall's team of historians in the Army's Historical Section, charged by Gen. George C. Marshall with collecting data from men of all ranks for an official history of the war. The team ultimately produced
The U.S. Army in World War
//(known as the Green Books from the color of the bindings), a series of scores of volumes known worldwide for accuracy and thoroughness. In 1954, Dr. Pogue published the penultimate volume in the ETO series,
The Supreme Command,
based on the documents generated by SHAEF and on interviews Pogue conducted with Eisenhower, Montgomery, and their principal subordinates.
The Supreme Command
is a genuinely great work, still the authoritative account.

But on D-Day, Dr. Pogue was working at the other end of the chain of command. He was on an LST serving as a hospital ship off Omaha Beach, interviewing wounded men about their experiences that morning. This was pioneering work in oral history; later Dr. Pogue was one of the founders of the Oral History Association.

Since I first began working for General Eisenhower as one of the editors of his wartime papers, Dr. Pogue has been my model, guide, and inspiration. He is important to my life, and to this book, in ways that go far beyond his publications (which include his four-volume, classic biography of Gen. George C. Marshall). For three decades he has been mar-velously generous with his time and wisdom. At historical conferences, on eight long trips to Normandy and the other European battlefields, by

correspondence and over the telephone, he has taught me and encouraged me in more ways than could ever be counted.

There are hundreds of young, and not so young, historians of World War II and of American foreign policy who are beholden to Dr. Pogue. He has brought up an entire generation of historians. His generosity with his time and knowledge goes far beyond the call of duty. To see him at a conference, surrounded by young historians and graduate students eager to hear and learn from him, is to see a great man doing great service. None of us can ever repay our debt to him, nor fully express our gratitude. He has touched our lives as a person and made us better at our craft. He is the first and the best historian of D-Day. That he has allowed me to dedicate this book to him fills me with pride and pleasure.

My interest in D-Day, first inspired by Dr. Pogue's writing, was strengthened in 1959 when I read Cornelius Ryan's
The Longest Day.
I thought then, and still do, that it was a superb account of the battle. Although I have developed some disagreements with Ryan over what happened on June 6, 1944, and have come to some different conclusions, I would be remiss if I failed to acknowledge my debt to his great work.

This book is based overwhelmingly on oral and written histories collected from the men of D-Day by the Eisenhower Center at the University of New Orleans over the past eleven years. The Center now has more than 1,380 accounts of personal experiences. This is the most extensive first-person, I-was-there collection of memoirs of a single battle in existence. Although space limitations made it impossible for me to quote directly from each oral history or written memoir, all the accounts contributed to my understanding of what happened. The contributors are listed in alphabetical order in Appendix A. To every man who contributed, I offer my deeply felt thanks.

Russell Miller of London has done extensive interviewing with British D-Day veterans. Student workers at the Eisenhower Center have transcribed some of his tapes, which he has graciously allowed me to use in this book. The Imperial War Museum in London has also provided tapes of the interviews the staff has done over the years, which have been transcribed by the Eisenhower Center. Andre Heintz has done interviews over the years with residents of the Calvados Coast; they are today in the Battle of Normandy Museum in Caen; he has kindly allowed me to use them for this book. The United States Army Military Institute at Carlisle Barracks, Pennsylvania, allowed me to use its extensive collection of interviews done by Forrest Pogue, Ken Heckler, and others, and its extensive manuscript holdings.

Phil Jutras, an American paratrooper who settled in Ste.-Mere-Eglise and who is the director of the Parachute Museum there, also collected oral histories from American veterans and from residents of Ste.-

Mere-Eglise, which he has most generously donated to the Eisenhower Center and allowed me to use for this book.

Capt. Ron Drez, USMC, a rifle-company commander at Khe Sahn in 1968, is the assistant director of the Eisenhower Center. For nearly ten years he has been doing group and individual interviews at veterans reunions, in New Orleans and around the country. Because of his own distinguished combat record, he has excellent rapport with the D-Day veterans. He gets them to talking and reminiscing as few others can do. His contribution to this book is invaluable. Dr. Giinter Bischof, a native of Austria whose father was a Wehrmacht soldier and eventually a POW in America, is the associate director of the Center. He has done and is doing interviews with German veterans. His contribution is also invaluable. The Center is exceedingly lucky to have Drez and Bischof on the team.

Ms. Kathi Jones is the major force of the Eisenhower Center. Without her, none of us could do our work. She handles our correspondence, keeps the books, maintains our schedules, makes our appointments, runs our annual conferences, directs our student workers on their transcribing tasks, organizes the oral histories and memoirs, reaches out to the veterans, soothes damaged egos, and in general serves as our chief of staff. Her dedication to her work and her ability to keep our myriad of activities running smoothly are exemplary. She does all this, and more, without ever losing her temper or her good humor. Dwight Eisenhower once called Beetle Smith "the perfect chief of staff." So say we of Kathi Jones.

Mrs. Carolyn Smith, secretary of the Eisenhower Center, along with student workers Marissa Ahmed, Maria Andara Romain, Tracy Hernandez, Jerri Bland, Scott Peebles, Peggy Iheme, Jogen Shukla, and Elena Marina, graduate students Jerry Strahan, Olga Ivanova, and Gunther Breaux, and volunteers Col. James Moulis, Mark Swango, C. W. Unangst, John Daniel, Joe Flynn, John Niskoch, Joe Molyson, Stephenie Ambrose Tubbs, and Edie Ambrose are all underpaid (or not paid at all) and overworked. They have stayed with it; without them there would be no Eisenhower Center, no oral history collection. The transcribers have had a terrible time with the names of French villages (as pronounced by American GIs) but they have persevered and triumphed. My debt to them is very great.

The Eisenhower Center will continue to collect oral histories and written memoirs, artifacts and wartime letters, from the men of D-Day, from all services and nations, so long as there are survivors. We urge all veterans to write us at the University of New Orleans, New Orleans, La. 70148, for instructions on preparing their histories.

In 1979 my dearest friend, Dr. Gordon Mueller, persuaded me to lead a battlefield tour, "From D-Day to the Rhine in Ike's Footsteps." Mr. Peter McLean of Peter McLean, Ltd., in New Orleans organized the tour. Mr. Richard Salaman of London served as courier for the tour. It was a

great experience for me, primarily because more than two dozen D-Day veterans joined the tourâ€”ranging in rank from general officer to privateâ€” and gave me on-site accounts of their D-Day experiences. We repeated the tour eight times. McLean and Salaman are great guys to work with and dear friends who have contributed mightily to my knowledge and understanding of D-Day.

So have many others, scholars, authors, documentary makers, and veterans, far too many to list hereâ€”they know who they are.

The Path of Silence by Edita A. Petrick
The Whispers of the Fallen by J. D. Netto
KNIGHT OF SHADOWS by Roger Zelazny
This Is Not a Werewolf Story by Sandra Evans
Poker Face by Law, Adriana
Icarus Descending by Elizabeth Hand
Thirst by Claire Farrell
Season of Dreams by Jenna Mindel
Want Me by Cynthia Eden
Christmas for Joshua - A Novel by Azrieli, Avraham