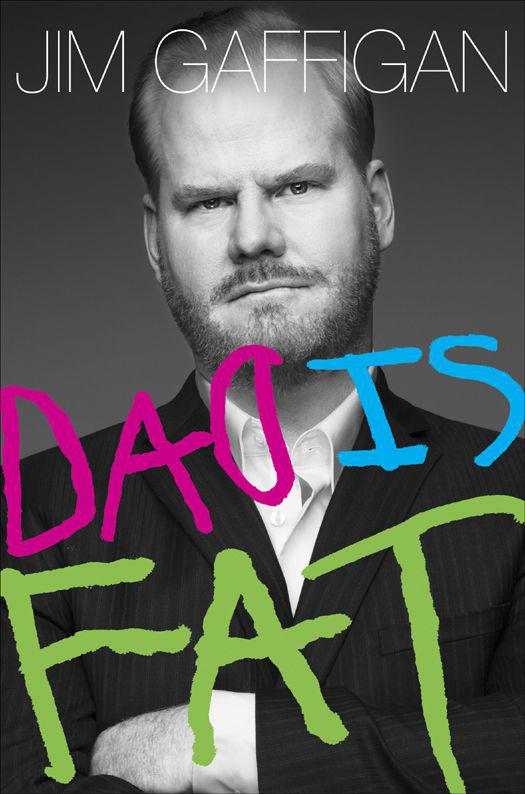 Published in the United States by Crown Archetype, an imprint of the Crown Publishing Group, a division of Random House, Inc., New York.
www.crownpublishing.com

CROWN ARCHETYPE
with colophon is a trademark of Random House, Inc.

Library of Congress Cataloging-in-Publication Data is available upon request.

This book is dedicated to Jeannie.

For me it feels silly and possibly insulting “dedicating” this book to or “acknowledging” Jeannie here. It doesn’t do justice to Jeannie’s participation in
Dad Is Fat
. This book really was
our
book. Jeannie not only made me a father and a better comedian, she made me an author. Yes, she is a magic Jeannie. If you are a fan of Jeannie, you will hear her voice in this book. For your sake, I removed all of the yelling. The image of Jeannie sitting at her computer turning my insane drivel into coherent essays while breastfeeding newborn Patrick will stay with me forever. I don’t know how I got so lucky to have Jeannie as a writing partner, lover, and friend, but I scored big. She really has ended up being a fantastic first wife.

FOREWORD
Letter to My Children
Who’s Who in the Cast
Rue the Day
“Drinking the Kool-Aid”
Family-Friendly
Have Children: The Condition
The Lone Ranger
Anti-Family
I Confess
Happy Days
Are Here Again
The Pharaoh and the Slave
Vice President
My Dad, the Professional Wrestler
The Narcissist’s Guide to Babies and Toddlers
When Women Get Lazy
Oh My God, You’re Pregnant?
Witchcraft
Newbornland
Dogfight
Circumcision
The Invasion
Eat the Coleslaw!
Toddlerhood
The Evil Within
Secrets and Lies
A Critical Analysis of Children’s Literature
No Further Questions
Bring in da Noise
The Chud People
Monsters
Nothing in Common
Hotel New York City
Vamanos
Is It Too Soon to Start Dating Again?
I’ll Be Your Tour Guide
Pale Force
Learnin’ Them
A Self-Portrait
Your Special Day
Losing My Religion
No Such Thing as a Free Babysitter
How to Put Five Kids to Bed in a Two-Bedroom Apartment
Negotiating with Terrorists
My Former Bed
Morning Has Been Broken
Naps Are Payday Loans
Get Married, Have Kids, Get Fat
Hand-in-Mouth Disease
We Need Bread
You Win, McDonald’s
How Sweet It Is
’Tis the Season
My Other Family
Are You Done Yet?
Six Kids, Catholic
The Great White Baby
The Mousetrap
Picture This
Snow Job
On the Road Again
Eskimo Pies
You’re Going to Miss This

Jim Gaffigan wrote a book? Isn’t he the Hot Pocket guy? I bet he regrets doing that joke. Hooooot Poooockets! I guess that’s funny to some people. Why would he write a book? Why would they let him write a book? He doesn’t even seem like he’s
read
a book before. Well, maybe a cookbook. Actually, he seems too lazy to cook. Maybe an eating book. I guess they let anyone write books now. That is if HE actually wrote this book. He probably just talked to some ghostwriter and they turned it into something readable. He looks like a ghost. Is he really that pale? I don’t know what’s going on with the cover and title
. Dad Is Fat
? I mean, obviously he’s fat. Wait, is this the guy with like ten kids? Either way it’s just weird to have so many kids today. I hope this isn’t one of those complain-about-your-kids books or, even worse, one of those sappy “I love my kids” books. Ugh. Funny, I never say “ugh.” Oh, I see what he’s doing. He’s talking for me, the reader. That’s why it’s italicized. I certainly wouldn’t do that in the foreword of a book
.

Letter to My Children

I am your dad. The father of all five of you pale creatures. Given how attractive and fertile your mother is, there may be more of you by the time you read this book. If you are reading this, I am probably dead. I would assume this because I can honestly foresee no other situation where you’d be interested in anything I’ve done. Right now, you are actually more interested in preventing me from doing things like working, sleeping, and smiling. I’m kidding, of course. Kind of. I love you with all of my heart, but you are probably the reason I’m dead.

All right, you didn’t kill me. Your mother did. She kept getting pregnant! I don’t know how. Don’t think about it. It will give you the willies. At one point, I was afraid she got pregnant while she was pregnant. She was so fertile I didn’t even let her hold avocados. Anyway, this is a book all about what I
observed being your dad when you were very young and I had some hair back in good old 2013.

You may be wondering how I wrote this book. From a very early age, you all instinctively knew I wasn’t that bright of a guy. Probably from all the times you had to correct me when I couldn’t read all the words in
The Cat in the Hat
. Hell, I find writing e-mails a chore. (Thank you, spell-check!) I wrote this book with the help of many people, but mostly your mother. Your mother is not only the only woman I’ve ever loved, but also the funniest person I know. When your mom was not in labor yelling at me, she made me laugh so hard.

P.S. How did you get that hula hoop into that restaurant Easter 2011?

Who’s Who in the Cast

Jim Gaffigan
(
Dad
). Jim feels honored to be playing the title role of Dad. Prior to being cast in
Dad Is Fat
, Mr. Gaffigan also had the title role in the long-running show
Mediocre Uncle
. He is thrilled to be given this opportunity to work with the fine cast of
Dad Is Fat
. “He has virtually no training, skills, or instincts on how to play this role.” —
New York Times

Marre Gaffigan
(
Oldest, Ensemble, Founding Member of the
Dad Is Fat
Company
). Miss Gaffigan is an eight-year-old third grader and an amazing dancer. Off-Broadway:
I Once Had My Own Bed
.

Jack Gaffigan
(
First Son, Ensemble, Sound Design & Special Effects
). Jack was last seen in
Yelling for No Reason at All
. He is six and would like to thank God for his incredible good looks, which earned him the leading role in the hit show
I’m Too Cute to Punish
.

Katie Gaffigan
(
Middle Child, Ensemble
). Katie is three years old and was the inspiration for the song “You Are My Sunshine.” She would like to thank the creators of
Scooby-Doo
and the color green.

Michael Gaffigan
(
Gateway Baby, Ensemble
). Michael is one year old and has been dazzling audiences since his 2011 debut. He would like to thank everyone who encouraged him to pursue his childhood dream of playing with a ball.

Patrick Gaffigan
(
Newborn, Ensemble
). Patrick is the newest cast member. A truly tireless performer, he has been with the company for only weeks but has already won the award for
Most Colicky Newborn
(2012).

There will be no intermission. Ever.

When I was single, I was convinced my friends who took the plunge and had their first baby were victims of an alien abduction, because they would disappear from the planet and reappear a year later as unrecognizable strangers. Of course, that may have been because I was way too into
The X-Files
.