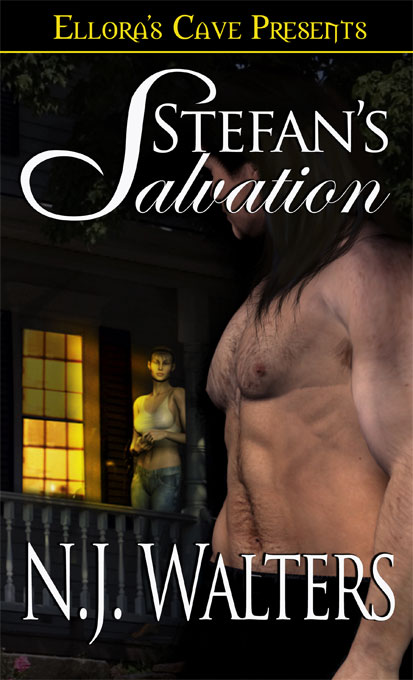 An Ellora's Cave Romantica Publication
www.ellorascave.com
Stefan's Salvation
ISBN # 1-4199-0747-6
ALL RIGHTS RESERVED.
Stefan's Salvation Copyright© 2006 N.J. Walters
Edited by Mary Altman.
Cover art by Syneca.
Electronic book Publication: October 2006
This book may not be reproduced or used in whole or in part by any means existing without written
permission from the publisher, Ellora's Cave Publishing, Inc.® 1056 Home Avenue, Akron OH 44310-
3502.
This book is a work of fiction and any resemblance to persons, living or dead, or places, events or locales
is purely coincidental. The characters are productions of the authors' imagination and used fictitiously.
Content Advisory:
The following material contains graphic sexual content meant for mature readers. This story has been
rated Erotic by a minimum of three independent reviewers.
Ellora's Cave Publishing offers three levels of RomanticaTM reading entertainment: S (S-ensuous), E (E-
rotic), and X (X-treme).
S-
ensuous
love scenes are explicit and leave nothing to the imagination.
E-
rotic
love scenes are explicit, leave nothing to the imagination, and are high in volume per the overall
word count. In addition, some E-rated titles might contain fantasy material that some readers find
objectionable, such as bondage, submission, same sex encounters, forced seductions, and so forth. E-rated
titles are the most graphic titles we carry; it is common, for instance, for an author to use words such as
"fucking", "cock", "pussy", and such within their work of literature.
X-
treme
titles differ from E-rated titles only in plot premise and storyline execution. Unlike E-rated titles,
stories designated with the letter X tend to contain controversial subject matter not for the faint of heart.

Dedication
To my husband who shares my love of vampire lore and all things gothic. Thank
you for your support and input and for caring as much about the Dalakis family as I do.
Special thanks to Sally Painter whose help with research was invaluable to me.
Thank you to Pamela Cohen for loving the Dalakis brothers. Your enthusiasm for
Stefan was inspiring.
Thank you to my editor, Mary Altman, for all the hard work and encouragement
and for caring as much about Stefan and Laurel Rose as I do.
And to the many readers who have fallen in love with the Dalakis brothers, thank
you for taking these remarkable men into your hearts.