Dancing Naked in the Mind Field 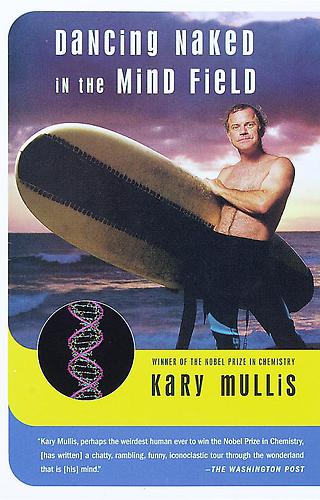 Acclaim for
Kary Mullis’s
DANCING NAKED IN
THE MIND FIELD

“This bona-fide wild card of the scientific community writes with eccentric gusto.… Mullis has created a free-wheeling adventure yarn that just happens to be the story of his life.”

“A very good book by a fascinating man.… [Mullis] enjoys an almost frighteningly brilliant mind and yet somehow manages to keep his feet firmly on the ground.… This guy cuts through the nonsense to the quick, tells it like it is, and manages to do so with insouciance [and] occasional puckishness.… But lighter moments aside, what he has to say is important.”

“One of the most unusual scientists of our times, a man who would be a joy to put under a microscope.”

“In this entertaining romp through diverse fields of inquiry, [Mullis] displays the openmindedness, eccentricity, brilliance, and general curmudgeonliness that make him the colorful chracter he is. His stories are engaging, informative, and fun.” 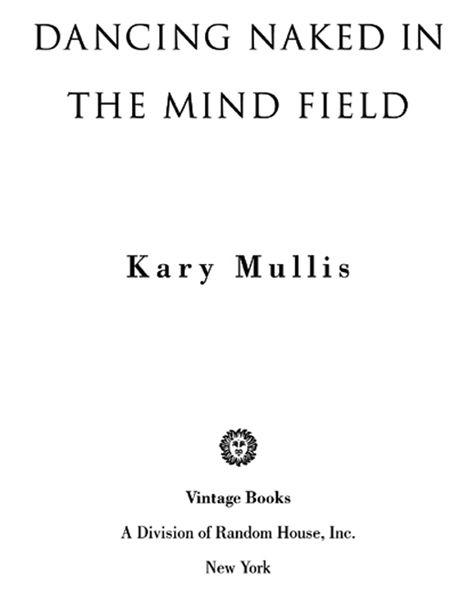 Vintage and colophon are registered trademarks of Random House, Inc.

I dedicate this book to Nancy Lier Cosgrove Mullis
.

Jean-Paul Sartre somewhere observed that we each of us make our own hell out of the people around us. Had Jean-Paul known Nancy, he may have noted that at least one man, someday, might get very lucky, and make his own heaven out of one of the people around him. She will be his morning and his evening star, shining with the brightest and the softest light in his heaven. She will be the end of his wanderings, and their love will arouse the daffodils in the spring to follow the crocuses and precede the irises. Their faith in one another will be deeper than time and their eternal spirit will be seamless once again
.

Or maybe he would have just said, “If I’d had a woman like that, my books would not have been about despair.”

This book is not about despair. It is about a little bit of a lot of things, and, if not a single one of them is wet with sadness, it is not due to my lack of depth; it is due to a year of Nancy, and the prospect of never again being without her
.

1. The Invention of PCR

3. A Lab Is Just Another Place to Play

4. Fear and Lawyers in Los Angeles

5. The Realm of the Senses

6. I Think, Therefore I Wire

7. My Evening with Harry

8. Intervention on the Astral Plane

11. What Happened to Scientific Method?

12. The Attack of the
Loxosceles reclusae

16. The Age of Nutritional Obsession

19. Have Slides Will Stay Home

22. The Age of Chicken Little

1
THE INVENTION OF PCR

T
HE SUN HAD
been hot that day in Mendocino County. It was May. A dry wind had come out of the east, and nobody knew how hot it had been until, around sunset, the wind stopped. I drove up from Berkeley through Cloverdale headed to Anderson Valley. The California buckeyes poked heavy blossoms out into Highway 128. The pink and white stalks hanging down into my headlights looked cold, but they were loaded with warmed oils that dominated the dimension of smell. It seemed to be the night of the buckeyes, but something else was stirring.

My little silver Honda’s front tires pulled us through the mountains. My hands felt the road and the turns. My mind drifted back into the lab. DNA chains coiled and floated. Lurid blue and pink images of electric molecules injected themselves somewhere between the mountain road and my eyes.

I see the lights on the trees, but most of me is watching something else unfolding. I’m engaging in my favorite pastime.

Tonight, I am cooking. The enzymes and the chemicals I have at Cetus are my ingredients. I am a big kid with a new car
and a full tank of gas. I have shoes that fit. I have a woman sleeping next to me and an exciting problem, a big one that is in the wind.

“What subtle cleverness can I devise tonight to read the sequence of the King of molecules?”

DNA. The big one.

There are pressing reasons to want to read this molecule. Children are born with genetic defects, sometimes with tragic consequences like muscles that wither and die. Such things could be predicted and averted if we could read the DNA blueprints.

Then there are the looming but not so pressing reasons for knowing DNA—the ones that extend out to horizons mankind has not yet reached. Understanding the intricate mechanisms of our own genes will have more than just medical impact. It will be one of the long and tangled strands of our future as a growing civilization of the planet Earth. Having a detailed understanding of why children resemble parents will lead to genetic manipulating by those who may prefer alterations over strict duplication. Genetic engineering will not be a new endeavor. Evolution is and always has been a genetic engineer. It’s just that people with eyes and minds and imagination see things in the distance and they get impatient. They will want control and they will want it soon and they will have it. The DNA molecules in our cells are our history, and they are the stuff of which our future will be crafted. All of the organs of all of the plants and animals of Earth and organs that have never been in the light of the moon or the sun, will be ours to explore—to use and adapt to our needs. Our will be done on Earth as we sail off to the stars in heaven.

Yes, DNA is the big one. Tonight I am playing with a fire that will burn as brightly as Antares, descended behind these fragrant mountains several hours ago.

The key to the problem lies in the oligonucleotides that my laboratory at Cetus now easily makes. Like a “FIND” sequence in a computer search, a short string of nucleotides in a synthetic molecule might be able to define a position along a very much longer natural DNA molecule. Finding a place to start is of utmost importance. Natural DNA is a tractless coil, like an unwound and tangled audio tape on the floor of the car in the dark.

What kind of chemical program would be required to “FIND” a specific sequence on DNA with 3 billion nucleotides and then display that sequence to a human who was trillions of times larger than the DNA? Instead of a list of statements in BASIC or FORTRAN run on a computer and displayed on a screen, I had to arrange a series of chemical reactions, the result of which would represent and display the sequence of a stretch of DNA. The odds were long. Like reading a particular license plate out on Interstate 5 at night from the moon.

I knew computer programming, and from that I understood the power of a reiterative mathematical procedure. That’s where you apply some process to a starting number to obtain a new number, and then you apply the same process to the new number, and so on. If the process is multiplication by two, then the result of many cycles is an exponential increase in the value of the original number: 2 becomes 4 becomes 8 becomes 16 becomes 32 and so on.

If I could arrange for a short synthetic piece of DNA to find
a particular sequence and then start a process whereby that sequence would reproduce itself over and over, then I would be close to solving my problem.

The concept was not out of the question because in fact one of the natural functions of DNA molecules is to reproduce themselves. They do it every time a cell divides into two daughter cells. A short piece of synthetic DNA could be treated in such a way that it would stick to a longer strand of DNA in a specific way if the sequences matched up somewhere on the long piece. The matching process would not be perfect. I might locate a thousand different places that were similar to the one I was searching for in addition to the correct one. A thousand out of the 3 billion in the human genome would be no trivial feat, but it wouldn’t be enough. I needed to find just one place.

Suddenly, I knew how to do it. If I could locate a thousand sequences out of billions with one short piece of DNA, I could use another short piece to narrow the search. This one would be designed to bind to a sequence just down the chain from the first sequence I had found. It would scan over the thousand possibilities out of the first search to find just the one I wanted. And using the natural properties of DNA to replicate itself under certain conditions that I could provide, I could make that sequence of DNA between the sites where the two short search strings landed reproduce the hell out of itself. In one replicative cycle I could have two copies, and in two cycles I could have four, and in ten cycles.… I thought I remembered that two to the tenth was around a thousand.

“Holy shit!” I hissed and let off the accelerator. The car coasted into a downhill turn. I pulled off. A giant buckeye stuck out from the hill. It rubbed against the window where
Jennifer, my girlfriend and co-worker, was asleep, and she stirred. I found an envelope and a pencil in the glove compartment. Jennifer wanted to get moving. I told her something incredible had just occurred to me. She yawned and leaned against the window to go back to sleep.

We were at mile marker 46.58 on Highway 128, and we were at the very edge of the dawn of the age of PCR. I could feel it. I wrote hastily and broke the lead. Then I found a pen.