Read Danger in the Wind Online

Danger in the Wind 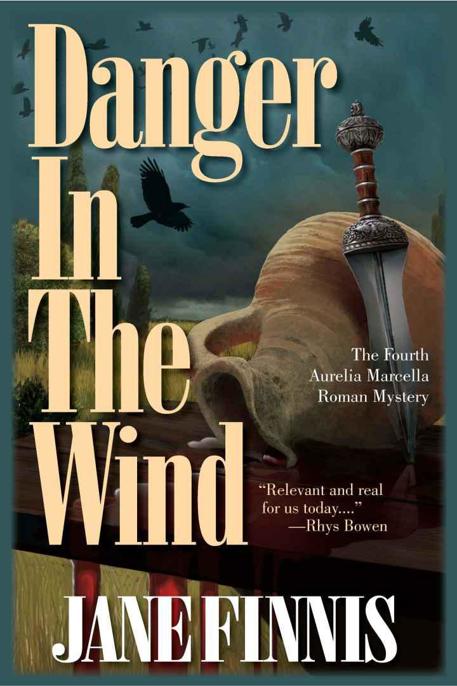 Danger in the Wind

The historical characters and events portrayed in this book are inventions of the author or used fictitiously.

in celebration of our happy friendship,

and with special thanks for her wise advice

during the writing of this book. 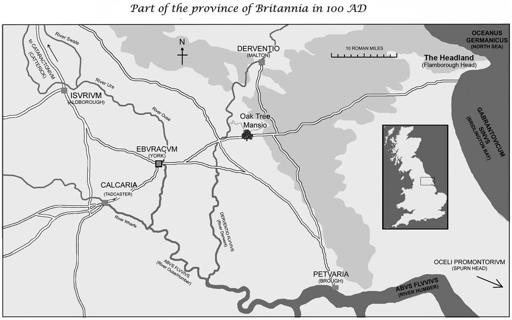 The letter arrived at breakfast. It jolted me out of my quiet morning mood and sounded an alarm in my head as shrill as a bugle.

I don’t get many letters, and they still give me a childish thrill of excitement. Half the fun is trying to guess who they’re from before I look inside. This one gave nothing away: it was an ordinary wooden note-tablet, folded in half and tied with a cord. It was addressed to Aurelia Marcella, the Oak Tree Mansio, coast road from Eburacum, and someone had written URGENT in large black letters above my name. But then everyone does that, even though we all know it makes precious little difference to how quickly the message arrives.

I gave up the guessing game and untied the cord. I was pleased to see the note was from my cousin, and the first few lines were cheerful enough.

I’m giving a patty at midsummer to celebrate my birthday, if indeed birthdays are truly a cause for celebration at our age. I’d love you to visit me and Marcus for a few days, to help me mark the occasion. Do say yes. It’s too long since we were together.

So far so good. But then:

Please help, Aurelia. There’s danger in the wind, and I fear the Greeks even when they bring gifts. Say nothing. Just come.

I read it through a second time. The alarm in my head grew as piercing as a whole cohort of buglers warning that barbarians were at the gates of Rome.

There was never any doubt that I’d accept the invitation. My cousin needed me, and that was enough. All the same, the sentence about danger was worrying. Yet how much danger could there really be at a birthday party? I poured myself a refill from the jug of watered wine and thought about it.

It was three years and more since I’d seen Cousin Jovina. I always call her “cousin,” though strictly speaking she’s not a first cousin, she’s actually…never mind, cousin will do. We’d been friends as children, then for many years not seen one another, until we rediscovered our friendship when she moved to Britannia. She’d lived at Eburacum for some time, an easy day’s travel from the Oak Tree. But her husband was in the army, so they never stayed anywhere for very long. It was at least three years since they’d been posted north to Isurium, and I hadn’t seen them since their farewell party.

If you’ve never heard of Isurium, it’s not surprising. It’s a small, undistinguished fort with a small, undistinguished village attached to it. It’s on the road to the northern frontier, but several days’ march away from it, so for years there’d been no serious soldiering to do. Marcus and his fellow officers presumably passed the time hunting, drinking, and whoring, and now and then organising practise manoeuvres for their men. But it was dull for their wives, with nothing to do and hardly any female company to do it with.

That must be why Jovina was giving this party and inviting me to stay a few days with her. But it didn’t account for the disturbing ending to her note.

Though the letter was worrying, at least it had created an interruption, and I was glad of that. I’d have welcomed any distraction at all, even a bill from our wine-shippers…well no, perhaps the situation wasn’t quite that desperate, but it was a close thing.

Usually I’m happy in the mornings and enjoy the first meal of the day. This one was late and leisurely, and it should have been a special treat, because my brother Lucius had come to stay. He doesn’t often visit us at the Oak Tree, so whenever he can manage a few days here, spending time together over unhurried meals is something we both relish.

But this time it was different. The food was good, the wine excellent, and I had no urgent chores to do. But Lucius had brought Vitellia, his latest lady-love. That was unusual to say the least. His romances lasted about as long as fashions in tunics, and as he’s normally based down south, I hardly ever got to meet his young women. When he’d written to say he was bringing Vitellia to stay I’d been pleased, and immensely curious.

They’d arrived yesterday, tired after several days on the road from Londinium and happy to have reached journey’s end. The first thing they did was drink a beaker of wine. The next was take a bath and change out of their dusty travelling clothes. By that time supper was ready, and at Lucius’ insistence, we ate in the main bar-room, not the private dining-room.

“I want Vitellia to meet everyone,” he said. Which meant, I realised, that he wanted everyone to meet Vitellia, so he could show her off. And she was lovely, with a beauty that made heads turn wherever she went. She carried herself like a goddess, and her delicate features, clear pale skin, and shining dark hair, would have made many of the more homely deities envious. She smiled a great deal, a captivating smile that made her look more beautiful than ever.

She didn’t say much, and what she did utter was harmless but unimaginative, though made pleasant by her wide-eyed, innocent charm. “How nice” and “how interesting” were two of her favourite comments. Lucius did enough talking for both of them, chatting away to everyone, preening himself like a rooster on a dung-hill whenever she drew an admiring glance. He lost no time in telling us that her father was a leading man in Londinium, rich and influential, with a big town house and a country estate just the correct distance from the capital. In other words, Vitellia was a typical Londinium heiress, young and marriageable, and as beautiful as a butterfly. And probably about as intelligent.

When he announced that they were to marry, I was horrified, though of course I tried not to show it. She was the wrong girl for him, I was certain, although they seemed so happy. What would happen when the initial infatuation faded? But I fetched our best Gaulish red wine for everyone to drink their health, and I did my very best to be pleased for them, joining in the congratulations and the cheerful banter with every show of enthusiasm.

In truth I was dismayed. Lucius had never gone as far as marriage with any woman, and now here he was planning to buy a villa for himself and this child near to her father’s property, and she was saying how nice and how interesting it would be to raise a family there.

I know, I know…I’m sounding like a sour old cat. I shouldn’t take against someone just because her dull mind doesn’t match her perfect body. And it wasn’t that I disliked her; in fact if I’d met her casually I’d have said there was no harm in her. But she wasn’t right for Lucius. He needed someone with more character, more spirit.

Lucius is my twin, and we’ve always been closer than most brothers and sisters. Partly, I know, the bond between us was strong because neither of us was married yet. I’d assumed he would eventually marry, of course I had, just as I assume I will some day. In my case I’m prepared to wait, because the only man I’d consider marrying is too completely absorbed in his work to think of settling down yet. And as for Lucius, I’d hoped he would choose a bride with a lively mind and a sense of humour, qualities that he possesses himself and Vitellia seemed to lack. Yes, her beauty was stunning, and her good family connections would doubtless help his career on the provincial governor’s staff. Many men would say those advantages were sufficient. But they weren’t, not for Lucius, not for the rest of his life.

I went to bed worrying about it. All I could do was hope that things would look better in the morning. They didn’t. Our breakfast together was doing nothing to cheer me up.

We serve a good breakfast at the Oak Tree, though I say so myself, and this morning there was freshly-baked bread, still warm, and a choice of honey or some excellent soft cow’s milk cheese, all washed down with a sweet Rhodian white wine. I’d even told the maids to lay out our best plates and beakers in the private dining-room and to put a vase of flowers on the table.

None of it helped. The girl was still dull, with no sudden lightning flashes of wit or humour to add spice to her insipid sweetness. She and Lucius were so absorbed in one another that I might as well not have been present. Conversation consisted of the kind of trivialities that strangers exchange, interspersed with long silences, which I found uncomfortable, and they didn’t even notice. The relaxed, easy intimacy I’d shared with Lucius since we were children was gone.

California Carnage by Jon Sharpe
The Thief Lord by Cornelia Funke
Yellow Ghost: La Femme Selita Prequel by Lace, Lolah
The Son of Someone Famous by M.E. Kerr
The Lonely Shadows: Tales of Horror and the Cthulhu Mythos by John Glasby
Darkened by S. L. Gavyn
The Long Way To Reno by Mix, Michelle
The Beautiful American by Jeanne Mackin
The Dead Saint by Marilyn Brown Oden
No Country: A Novel by Kalyan Ray