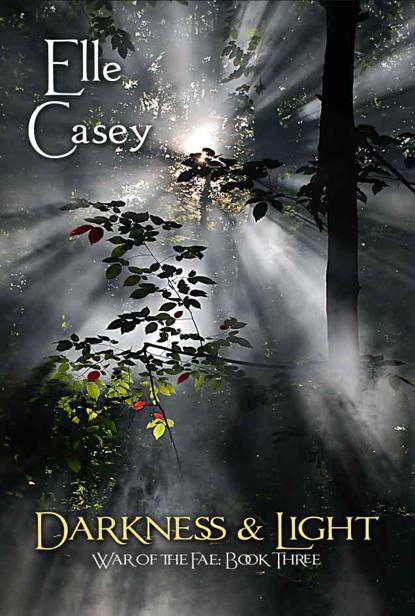 War of the Fae

No part of this
ebook
may be reproduced or copied without author permission.

Please support artistic expression and help promote copyright protections by buying a copy of this
ebook
at www.Amazon.com.

The author thanks you deeply for your understanding and support.

As my portfolio of titles grows, I’ve started to notice that I’m thanking a lot of the same people.

Regardless, their contributions should continue to be recognized because without them, my stories would suffer or perhaps not even exist.

So ... onwards and upwards.

First, thanks to Beth Godwin and Margaret for the editing.

I have proven time and again that I’m not capable of editing my own work, so thank you for your red pens and eagle eyes.

To the reviewers and book bloggers who have featured my book on your sites, thanks ever so much.

You have allowed me to see my books through different eyes and it’s just an amazing view.

They are my drugs and I am addicted!

Thank you to Samantha Young, fellow indie writer who’s never hesitated to give me encouragement and something to shoot for.

I love your entrepreneurship and positive attitude!

Thanks to Amazon for giving indie authors like me a platform from which to share our work.

Thank you to Facebook for connecting me with readers and long ago made friends who I thought I’d lost.

Thank you to France, a lovely place to live and raise a family amongst friends.

Thank you to my girlfriends in France, especially Caroline, Joy, Patricia, Isabelle, and
Béa
, the DDG you-know-
whats
.

To my husband and children who allow me the time to write and encourage me every step of the way.

And to my mom, who captured Abby in a bell jar and sent her to me, even though I hate surprises.

This book is dedicated to my little Lady Goo
Goo
, a water sprite with a great big, proud heart of a pixie who can throw together an outfit like nobody’s business.

My best friend Tony’s hand rested on my shoulder, sending a sense of peace into my heart – which is no small accomplishment, seeing as how at this particular moment I was locked in a potentially epic battle with none other than Ben, the Dark Fae fire demon who right now looked like a creature sent straight from hell.

Tony saying he wanted to stay with me and that we didn’t have to be apart anymore was the best news I’d had in two months, since I’d changed from human to fae.

Now all I had to do was figure out how to handle the flaming terror standing in front of me with a firebomb in his hands.

“Ben, he doesn’t want to go with you!

He’s coming with me!”

I thought the roar of our two opposing powers would make it difficult to hear, but apparently there was no need for me to yell, because Ben answered me in a perfectly normal tone of voice and I understood him just fine.

But I don’t believe he’s making the decision with all of the information he needs.

It’s only fair that he go into this with full disclosure, don’t you think?” He arched his eyebrow at me patronizingly, making me feel small and stupid.

I hated feeling small and stupid, and I
especially
hated when it was Ben making me feel that way.

His answer was unsettling too, because I didn’t want Tony to think I was hiding anything.

I knew the truth and I had already given it to Tony before Ben showed up.

We were the good guys, the Light Fae; Ben represented the bad guys, the Dark Fae.

There was really nothing else to tell.

It’s obvious this guy Ben knew something about the use of psychological warfare.

He probably invented the term a hundred years ago or something.

You never could tell the age of a fae from the looks of him.

On the outside, he was a seriously, amazingly awesome-looking human guy of eighteen.

On the inside, he was probably a three hundred and fifty year old, ugly ass fae serpent, using a spell to mesmerize me into thinking he was hotness personified.

I don’t even know that there are such things as fae serpents – but he
could
be one.

He was that slithery.

I gave my head a mental shake – I couldn’t keep focusing on his looks.

I’m sure the rule I had for human guys went for fae guys too – namely, that the better looking they are, the crappier they are to girls and the shallower they can be.

I mean, what guy has to develop a decent personality when everyone just hands him everything he wants in life just because he’s gorgeous?

I had to ignore his beautiful face ... concentrate on the blackness of his soul and how much I despised him for trying to steal Tony from me.

I already told him before you came in, uninvited and unwanted, I’d like to add.”

Ben broke his gaze away from me and looked at Tony.

“Did she tell you that she’s going to force you to fight in a war?

That you’re going to have to kill people?”

I’d just spent thirty minutes convincing Tony he needed to go with me and that everything would be okay.

But I knew he didn’t like the idea of violence, and apparently, so did Ben.

“Tony knows enough to make a good decision, which he already did.

So why don’t you just get the hell outta here so we can be on our way?”

“Um, Jayne?” said Tony’s scared voice from behind me.

His voice trailed off, but I knew what this meant.

I had to do something to salvage the situation as best I could – and quickly.

I fixed Ben with the angriest look I could muster past my fear.

“Power down, asshole, so we can talk about this without blowing up the neighborhood.”

“I will if you will,” he said, eyebrow raised again, this time in challenge.

Man, is he ever good with the eyebrow thing.

I eased off on my hold over The Green, letting it know I wanted it to go back through the ley line below Tony’s house and down into the earth where it rested when I wasn’t calling it up and using it to do my bidding.

I saw the red glow that had amassed itself in Ben’s hands get lighter and dissipate up his arms and around the back of his body.

Soon we were both standing there looking like regular teenagers again.

No more roaring or humming.

I looked at the guys to my left and right – Finn, Jared, Spike and Chase.

They all visibly relaxed from their fight-ready stances, but still remained wary.

“Me neither,” said Spike.

Chase remained silent – as usual – holding onto my injured pixie friend, Tim, who Ben had pretty much just fried in midair with a laser beam of fire.

My other daemon friend, Jared, was also silent.

Even so, I knew they didn’t trust Ben any more than I did.

I looked at Tony with frustration.

“Dammit, Tony, what the hell?

I thought we went over this.”

I’m not saying I’m going anywhere with him or not going with you.

I’m just saying I trust him.

He’s been nice to me, Jayne, and he hasn’t done anything to hurt me.

And apparently, he could have if he had wanted to.”

He looked up at Ben, giving him a nervous smile.

This was so typical of Tony, giving someone the benefit of the doubt, even when that someone was a friggin’, pixie-roasting asshole.

“Listen, Tony, I get it that you felt abandoned when I stayed in the forest and you came back here,” he started to interrupt, and I was fairly certain what he was going to say, so I held out my hand to shut him up, “and I know you don’t remember being there, but you
were
, and I’ll be happy to prove that to you when we get back.

I looked back over at Ben.

“You may trust him, but we sure as hell don’t; and I have a friend to take care of.”

I gestured with my head to Tim, lying in Chase’s hands, his blackened stump of a wing sticking out from his side.

“Well, thankfully he’s unconscious, because I know for a fact that having a wing taken off is painful – I’m sure having one
burned
off is excruciating.”

I shot Ben a look that conveyed what a piece of shit I thought he was.

Tony looked at Tim and got a sick look on his face.

Ben was going to ignore my comment but then he noticed Tony’s face too.

“Tony, you need to understand – pixies are very dangerous.

They may look small and cute, but he was coming over to attack me.

I was only defending myself.”

Tony looked at me for confirmation, making me feel uncomfortable.

Why
was I having
to defend my tiny, currently inert friend who had only been trying to save us?

“Tim, as you’ve conveniently forgotten, was only protecting us.

“I was no danger to any of you.

You’re the one who issued the threats.”

The further this conversation went, the worse I felt.

Somehow Ben was turning everything around to make me look like the bad guy in this whole thing.

I know my face was expressing my frustration, and as I looked at him to respond, I saw him smile smugly.

Asshole thought he had me up a tree.

“Don’t stand there and act like you’re mister honest guy.

I looked at Tony and continued, “Ask him, Tony.

Ask him why he didn’t tell you.

You trusted a guy who was lying to you and hiding things the whole time he was getting to know you.”