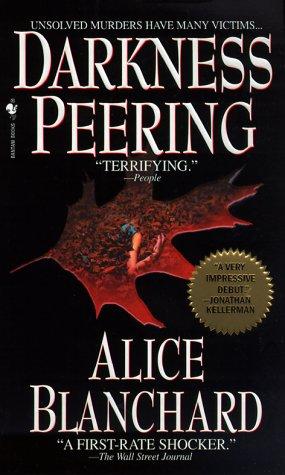 No part of this book may he reproduced or transmitted in any form or by
any means, electronic or mechanical, including photocopying,

recording, or by any information storage and retrieval system,

without permission in writing from the publisher.

Bantam Books are published by Bantam Books, a division of Random House,
Inc. Its trademark, consisting of the words "Bantam Books" and the
portrayal of a rooster, is

PRINTED IN THE UniteD STATES OF AMERICA

whose love sustains me, and in memory of

whose wisdom graces these pages.

Deep into that darkness peering, long I stood there wondering,
fearing. Doubting, dreaming dreams no mortal ever dared to dream
before.

faceup in a rust-colored runoff pond on the westernmost corner of Old
Mo Heppenheimer's cow pasture. Her milky eyes were open to the morning
sky, one hand suspended as if brushing away insects. The sun was
shining down, warming tiny black tadpoles in the shallows at her feet.
A king snake was coiled in the muddy hollow under one arm, and a daddy
long legs crawled across her extended fingers.

"Git." Nalen waved his hand and the king snake slithered into the
duckweed. He followed its progress until it vanished, then realized he
was biting the inside of his cheek hard enough to draw blood. He
looked away for an instant, heart thudding dully in his chest. A dense
forest abutted the pasture, balsam firs releasing their aromatic
fragrance from sap blisters on their trunks, leafy ferns thriving along
with golden saxifrage and wild iris at the forest's edge. The day was
hot, the sun high, and the silence was so thick you'd've thought the
sky didn't have any air in it.

Steeling himself, he rolled up his pant legs and waded into the shallow
pond, mud sucking at his shoes. He probed the cadaver's scalp, neck,
arms, chest and legs, careful not to shift her position before the
photographs were taken. A foul smell lingered in the air above the
body like smoke in a bar. He could find no entrance or exit wounds, no
blunt injuries, no ligature marks, although he detected finger markings
around the throat. Livor mortis had set in, rendering the underside of
her body a reddish purple due to the accumulation of blood in the small
vessels. Her elbows were blanched, as were the backs of her legs due
to compression of the vessels in this area. Rigor mortis was fully

developed, pinning the time of death to between twelve and twenty-four
hours. The girl's face appeared congested and cyanotic, with fine
petechial hemorrhages on her eyelids and across the bridge of her nose.
There were also contusions and fingernail abrasions on her neck near
the larynx.

Nalen recognized the dead girl from her pictures: Melissa D'Agostino,
age fourteen, missing since the previous afternoon. Shy, chubby,
mentally retarded. Her left hand, fisted shut, rested on her belly.
Her face with its characteristic Down's syndrome eyes, its triangular
nose and protruding tongue, was pallid in the strong sunlight, and dark
curls as thick as sausages clung to her forehead. She wore laced
yellow sneakers and her pink shorts and short-sleeved polka-dot top
were bunched up in back from being dragged a short distance.

Nalen took a step back and scanned the horizon, a mild breeze lifting
his thinning brown hair. He'd been a Boston patrolman for fifteen
years before moving his wife and kids to this sleepy community five
years ago to become its chief of police. Flowering Dogwood, Maine.
Population eighteen thousand. Nobody locked their doors here. This
was a small town, and he was the top man in a small-town police
department, and the sight of the dead girl shook him in ways he hadn't
been shaken in quite some time.

Here, in this isolated stretch where Old Mo let his Holsteins and
Guernseys graze, local teenagers hung out late at night, smoking pot
and getting drunk. Across the street was a dead-end dirt road, a
lover's lane, and further east was the Triangle, the town's poorest
neighborhood, whose cramped streets of dilapidated houses grew weed
like around the industrial section where the old sawmill and ceramic
plant were located. Flowering Dogwood had prospered in the early
nineteenth century, becoming Maine's sixth-largest municipality. The
town's boots and shoes were renowned for their craftsmanship, and the
dense, compact, fine-grained wood of the flowering dogwood was
unequaled for

the making of shuttles for weaving. By the late 1800s, however,
Flowering Dogwood's fortunes had begun to decline, and nowadays the
town was known mostly for its historical import, its ceramics and
handcrafted furniture.

But what really distinguished this little community from other
tradition-steeped New England towns was its school for the blind. The
sidewalks were wide for pedestrian traffic and the streetlights were
outfitted with little alarms that whooped whenever the walk light went
on. Seeing-eye dogs were bred and trained locally and the historical
society had fought to preserve the eighteenth-century house belonging
to the school's founder.

Turning his attention back to the scene, Nalen searched the area for
footprints and found a partial in the mud. The toe print was unclear
and didn't have any tread, making it virtually useless. Nearby rested
a branch the perpetrator must've used to wipe away his other
footprints. That was smart. Nalen felt the hairs rise on the back of
his neck.

A siren whelped, and Lieutenant Jim McKissack's dusty '72 AMC Javelin
pulled onto the field, bumping over furrows. McKissack slammed on the
brakes and the car fishtailed, stopping just short of a barbed wire
fence where cattle craning their necks toward the sweeter, taller
grasses reared back. McKissack and Detective Hughie Boudreau got out
and headed across the field toward Nalen, a study in contrasts.

Jim McKissack was tall and good-looking, a ladies' man with a gruff
sort of charm, a meticulous dresser--everything Hughie Boudreau was
not. Hughie was short and rumpled, fine-boned, almost girlish, with a
mustache that looked penciled on. He had a head of prematurely graying
hair and reminded Nalen of a kid on his first roller-coaster ride, eyes
constantly roving. Hughie was married and considered himself a good
Christian, whereas McKissack was the type of guy who'd sell his own
grandmother to the cannibals if it would help him solve a case. The
kind of cop who smoked a cigar and wore sunglasses at five o'clock in
the morning.

"Watch out, there's a partial right in front of you," Nalen said, and
Hughie spun around and vomited in the grass.

McKissack radiated vigor as he strode toward the runoff pond. Parting
the black-root rushes and broad-leaved cattails, he stood studying the
dead girl with the same kind of impatient intensity he brought to every
case. "What d'you think, Chief?"

"Strangulation, would be my guess."

McKissack shook his head. "Petechiae could also be present for heart
failure or severe vomiting."

"Yeah, but the signs of cyanosis are most striking on the neck. See
those contusions and fingernail markings? He used more force than
necessary to subdue the victim."

Hughie was making retching sounds like a door being torn off its
hinges.

"Who the hell would strangle a retarded kid?"

"Some severely inadequate person," Nalen said softly, since the angrier
he got, the gentler his voice grew. He stared at the victim's face.
During manual strangulation, the perp commonly altered his grasp of the
neck, resulting in intermittent compression of the veins and arteries
with waves of blood coursing in and out of the head, accompanying peaks
and valleys in blood pressure that resulted in the rupturing of blood
vessels. The petechial hemorrhages on the victim's eyelids and over
the bridge of her nose were due to ruptured capillaries.

McKissack quickly unlaced his expensive Italian shoes and left them
like two footprints on the muddy bank. "You think we've got a
pedophile on our hands?"

McKissack glanced up. "You don't think this was a sexual homicide?"

"Let's wait for the autopsy."

"Give me your best guess, Chief."

Nalen thought for a moment. "She was strangled in the field, then
dragged down to the pond."

"No rape? No molestation?"

"Look at her clothes. Nothing's twisted up or unbuttoned or put on
backwards."

"Still... I've got a hunch." McKissack lit a cigarette. "She was a
very trusting person, according to her mother. She might've done a few
things willingly ... you know, not knowing any better."

McKissack picked up the muddy branch and turned it over. "He erased
his own footprints?"

"Except for that partial there."

"I was hoping we'd find her alive." Hughie straightened up and wiped
his mouth on his sleeve. "My wife and I were on our knees last
night.."

"Whatever floats your boat," McKissack said, and Hughie spun around,
his face an ugly mottled color.

"We were praying, you ignoramus! You should try it sometime,
McKissack, it just might do you some good."

"Yeah, well, it didn't do her any good, did it?" He glanced sharply at
the corpse.

"Gentlemen." Nalen snapped open his notebook, fingers cramping white
around his pen, and started ticking off points on his mental checklist:
they'd have to write a description of the scene, make sketches, take
pictures. He'd already formed an opinion. The medical examiner was
due any minute now, and Nalen was anxious to confirm his suspicions.
He figured the girl had been dead for at least fourteen hours,
strangled to death by a

pair of unforgiving hands. If they were lucky, they'd get fingernail
scrapings.

He went to his squad car, opened the trunk and got out a roll of yellow
police tape. With measured steps, he cordoned off the area, looping
the tape around the swamp rose and cattails, making the perimeter as
wide as possible. In the distance, people were already beginning to
congregate by the side of the road, some of them crossing into the
pasture.

"Keep those rubbernecks back, would your"

"Take a look at this," McKissack said as they bent over the body
together. There was a contusion on the back of the girl's skull, and
Nalen wondered how he'd missed it.

"The perp must've struck her from behind," McKissack conjectured, "then
raped her. Then strangled her. Then dragged her down here and dumped
her."

"Nothing's amiss with her clothes, McKissack. Why rape somebody, then
rebutton their shorts?"

"Let's wait for the autopsy."

"This isn't about right or wrong." Nalen's head was throbbing, and
every shining blade of grass seemed to reflect the full glare of the
sun. He took off his hat, mopped his brow. McKissack wasn't a bad
cop, just a little arrogant. He tried to macho it. He didn't want
help, and because of that, he would fail. They'd argued more than once
over procedure. Still, Nalen figured that, with the proper guidance,
McKissack could turn out to be one of the best. In the meantime, he
spent half his time at the scene playing mind games with McKissack, the
other half playing nursemaid to Hughie, when all he wanted was to keep
things rolling, keep

his team moving, no time to contemplate the tragedy here. No time to
acknowledge this was somebody's little girl.

Nalen stooped to pick up a cigarette butt. "Goddammit, McKissack.
This yours?"

Law and Disorder by Tim Kevan
My Friend Walter by Michael Morpurgo
The Child Inside by Suzanne Bugler
In Too Deep - 39 Clues 06 by Jude Watson
Spyder Web by Tom Grace
League of Super Heroes: Rise of the Villain (Book #1)
Maddie's Big Test by Louise Leblanc
The Lightning God's Wife: a short story by Grace Draven
Calling Love: A Contemporary Christian Romance (Modern Conveniences Book 2) by Leah Atwood
Trust Me by Anna Wells