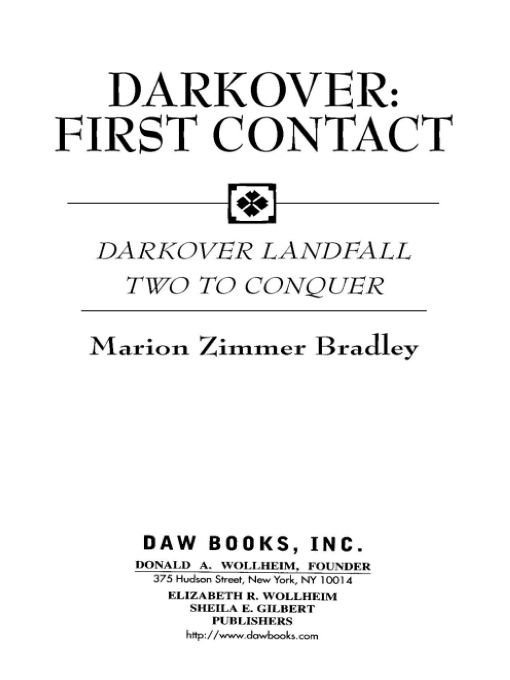 Table of Contents
Title Page
Copyright Page
Dedication
Acknowledgements
DARKOVER LANDFALL
CHAPTER ONE
CHAPTER TWO
CHAPTER THREE
CHAPTER FOUR
CHAPTER FIVE
CHAPTER SIX
CHAPTER SEVEN
CHAPTER EIGHT
CHAPTER NINE
CHAPTER TEN
CHAPTER ELEVEN
CHAPTER TWELVE
CHAPTER THIRTEEN
CHAPTER FOURTEEN
CHAPTER FIFTEEN
EPILOGUE
TWO TO CONQUER
PROLOGUE: THE ALIEN
BOOK ONE - The Foster Brothers
CHAPTER ONE
CHAPTER TWO
CHAPTER THREE
CHAPTER FOUR
CHAPTER FIVE
CHAPTER SIX
BOOK TWO - The Kilghard Wolf
CHAPTER ONE
CHAPTER TWO
CHAPTER THREE
CHAPTER FOUR
CHAPTER FIVE
BOOK THREE - The Dark Twin
CHAPTER ONE
CHAPTER TWO
CHAPTER THREE
CHAPTER FOUR
CHAPTER FIVE
CHAPTER SIX
CHAPTER SEVEN
CHAPTER EIGHT
CHAPTER NINE
The Critics Hail Marion Zimmer Bradley’s Darkover Novels:
“A rich and highly colored tale of politics and magic, courage and pressure . . . Topflight adventure in every way!”
—Lester Del Rey in
Analog
(for
The Heritage of Hastur
)
“May well be [Bradley’s] masterpiece.”
—
New York Newsday
(for
The Heritage of Hastur
)
“Literate and exciting.”
—
New York Times Book Review
(for
City of Sorcery
)
“Suspenseful, powerfully written, and deeply moving.”
—
Library Journal
(for
Stormqueen!
)
“A warm, shrewd portrait of women from different backgrounds working together under adverse conditions.”
—
Publishers Weekly
(for
City of Sorcery
)
“I don’t think any series novels have succeeded for me the way Marion Zimmer Bradley’s Darkover novels did.”
—
Locus
(general)
“Delightful . . . a fascinating world and a great read.”
—
Locus
(for
Exile’s Song
)
“Darkover is the essence, the quintessence, my most personal and best-loved work.”
—Marion Zimmer Bradley
A Reader’s Guide to DARKOVER
THE FOUNDING:
A “lost ship” of Terran origin, in the pre-empire colonizing days, lands on a planet with a dim red star, later to be called Darkover.
DARKOVER LANDFALL
THE AGES OF CHAOS:
One thousand years after the original landfall settlement, society has returned to the feudal level. The Darkovans, their Terran technology renounced or forgotten, have turned instead to freewheeling, out-of-control matrix technology, psi powers, and terrible psi weapons. The populace lives under the domination of the Towers and a tyrannical breeding program to staff the Towers with unnaturally powerful, inbred gifts of
laran.
STORMQUEEN!
HAWKMISTRESS!
THE HUNDRED KINGDOMS:
An age of war and strife retaining many of the decimating and disastrous effects of the Ages of Chaos. The lands which are later to become the Seven Domains are divided by continuous border conflicts into a multitude of small, belligerent kingdoms, named for convenience “The Hundred Kingdoms.” The close of this era is heralded by the adoption of the Compact, instituted by Varzil the Good. A landmark and turning point in the history of Darkover, the Compact bans all distance weapons, making it a matter of honor that one who seeks to kill must himself face equal risk of death.
TWO TO CONQUER
THE HEIRS OF THE HAMMERFELL
THE FALL OF NESKAYA
ZANDRU’S FORGE
THE RENUNCIATES:
During the Ages of Chaos and the time of the Hundred Kingdoms, there were two orders of women who set themselves apart from the patriarchal nature of Darkovan feudal society: the priestesses of Avarra and the warriors of the Sisterhood of the Sword. Eventually these two independent groups merged to form the powerful and legally chartered Order of Renunciates or Free Amazons, a guild of women bound only by oath as a sisterhood of mutual responsibility. Their primary allegiance is to each other rather than to family, clan, caste, or any man save a temporary employer. Alone among Darkovan women, they are exempt from the usual legal restrictions and protections. Their reason for existence is to provide the women of Darkover an alternative to their socially restrictive lives.
THE SHATTERED CHAIN
THENDARA HOUSE
CITY OF SORCERY
AGAINST THE TERRANS
—THE FIRST AGE (Recontact):
After the Hastur Wars, the Hundred Kingdoms are consolidated into the Seven Domains, and ruled by a hereditary aristocracy of seven families, called the Comyn, allegedly descended from the legendary Hastur, Lord of Light. It is during this era that the Terran Empire, really a form of confederacy, rediscovers Darkover, which they know as the fourth planet of the Cottman star system. The fact that Darkover is a lost colony of the Empire is not easily or readily acknowledged by Darkovans and their Comyn overlords.
REDISCOVERY (
with Mercedes Lackey
)
THE SPELL SWORD
THE FORBIDDEN TOWER
STAR OF DANGER
WINDS OF DARKOVER
AGAINST THE TERRANS
—THE SECOND AGE (After the Comyn):
With the initial shock of recontact beginning to wear off, and the Terran spaceport a permanent establishment on the outskirts of the city of Thendara, the younger and less traditional elements of Darkovan society begin the first real exchange of knowledge with the Terrans—learning Terran science and technology and teaching Darkovan matrix technology in turn. Eventually Regis Hastur, the young Comyn lord most active in these exchanges, becomes Regent in a provisional government allied to the Terrans. Darkover is once again reunited with its founding Empire.
THE BLOODY SUN
THE HERITAGE OF HASTUR
THE PLANET SAVERS
SHARRA’S EXILE
THE WORLD WRECKERS
EXILE’S SONG
THE SHADOW MATRIX
TRAITOR’S SUN
THE DARKOVER ANTHOLOGIES:
These volumes of stories edited by Marion Zimmer Bradley, strive to “fill in the blanks” of Darkovan history, and elaborate on the eras, tales, and characters which have captured readers’ imaginations.
THE KEEPER’S PRICE
SWORD OF CHAOS
FREE AMAZONS OF DARKOVER
THE OTHER SIDE OF THE MIRROR
RED SUN OF DARKOVER
FOUR MOONS OF DARKOVER
DOMAINS OF DARKOVER
RENUNICATES OF DARKOVER
LERONI OF DARKOVER
TOWERS OF DARKOVER
MARION ZIMMER BRADLEY’S DARKOVER
SNOWS OF DARKOVER
DARKOVER NOVELS IN OMNIBUS EDITIONS
HERITAGE AND EXILE
omnibus:
The Heritage of Hastur | Sharra’s Exile
THE AGES OF CHAOS
omnibus:
Stormqueen! | Hawkmistress!
THE SAGA OF THE RENUNICATES
omnibus:
The Shattered Chain | Thendara House | City of Sorcery
THE FORBIDDEN CIRCLE
omnibus:
The Spell Sword | The Forbidden Tower
A WORLD DIVIDED
omnibus:
Star of Danger | The Bloody Sun | The Winds of Darkover
DARKOVER: FIRST CONTACT
omnibus:
Darkover Landfall | Two to Conquer 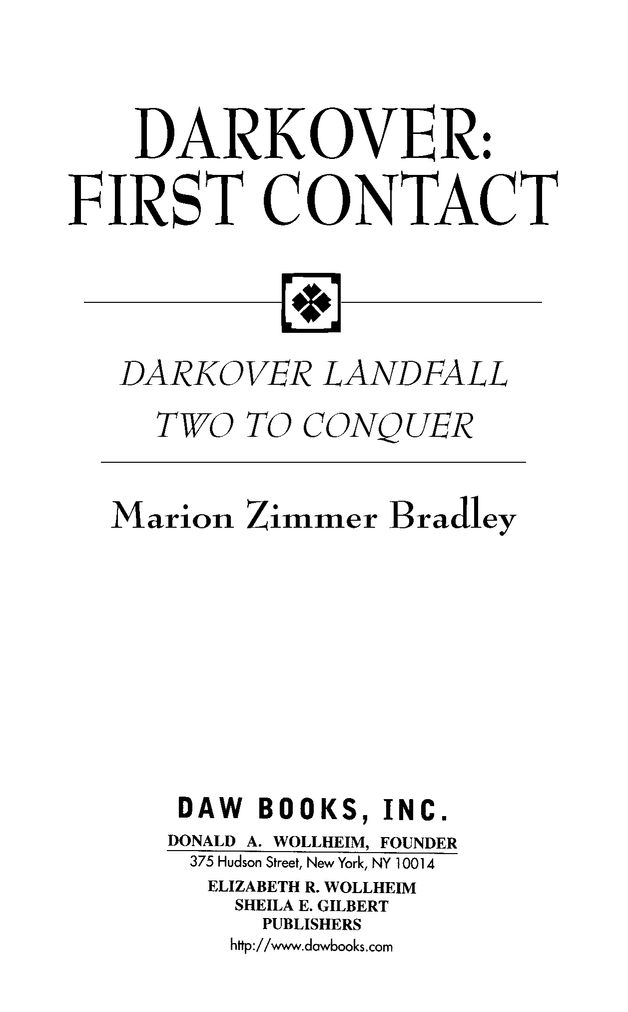 Two to Conquer
For Tanith Lee, to commemorate an old argument which neither of us won, or lost, or ever will
ACKNOWLEDGMENTS
Darkover Landfall:
The songs quoted in the text from the New Hebrides Commune are all from the
Songs of the Hebrides
, collected by Marjorie Kennedy-Fraser and published 1909, 1922 by Boosey and Hawkes.
The Seagull of the Land-Under-Waves
, English worlds by Mrs. Kennedy-Fraser, from the Gaelic of Kenneth MacLeod.
Caristiona
, words traditional, English by Kenneth MacLeod.
The Fairy’s Love Song
, English words by James Hogg (adapted).
The Mull-Fisher’s Song
, English words by Marjorie Kennedy-Fraser. The
Coolins of Rum
, English words by Elfrida Rivers, by special permission.
Two to Conquer
To “Cinhil MacAran” of the SCA for the first verse of “Four and Twenty
Leroni
”—to the tune of “The Ball of Kirriemuir”—and to Patricia Mathews for creating the Sisterhood of the Sword and dressing them in red.
DARKOVER LANDFALL

The Pirate's Witch by Candace Smith
After the Rain (The Callahans) by Hayden, Jennifer
Loud in the House of Myself by Stacy Pershall
Winter House by Carol O'Connell
From Morocco to Paris by Lydia Nyx
These Honored Dead by Jonathan F. Putnam
The Reluctant Duke (Love's Pride Book 1) by G.L. Snodgrass
My Oedipus Complex by Frank O'Connor
Operation London by Hansen, Elle
The Finder: A Novel by Colin Harrison