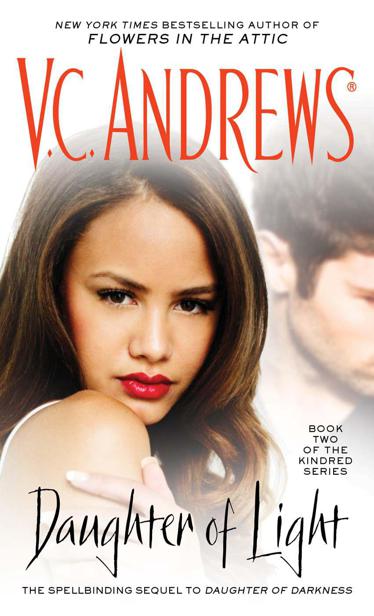 Thank you for purchasing this Pocket Books eBook.

It was as if the curtains suddenly had been closed on the bedroom window. The full moon was blacked out, as was the clear night of stars. The room was in pitch darkness, and all I could hear was the sound of my own heavy breathing. A breeze crossed my face, and then I felt a familiar warmth on my neck, the soft, moist warmth of loving lips. It was how he always kissed me good night, never on my cheeks or lips but always on my neck.

“Daddy?” I whispered, and waited. There was no response, just the heavy silence careening through my ears and down into my cringing heart. “Are you here?”

Slowly, my hand trembling, I brought my fingers to my neck and felt something hot and liquid.

Panicked, I lunged for the night-light, flicked it on, and sat up to look at myself in the mirror over the dresser across the way.

I had been bitten.

My body was so tight that I felt as if I were wrapped in a straitjacket around my breasts and stomach. I realized it was my own arms embracing me. I was hugging myself very tightly to keep from falling apart. I was so closed up inside myself that my heavy breathing sounded as if it was coming from someone else. Outside the bedroom, the fingers of the wind scratched at the windowpane. The cloud that had covered the moon slid off like a thin slice of melting silvery ice and floated toward the horizon. When I relaxed my arms, I was still clutching my hands together so hard that I sent pain up each wrist.

“Get hold of yourself, Lorelei Patio,” I whispered at the image of my stark-naked body in the mirror. Under the now radiant moonlight, my skin took on a brassy glow, and my eyes, which had flamed with fear, gradually cooled into frosted orbs, glittering and flickering out until they darkened.

I took another deep breath and then, still trembling, returned to bed. I could hear the sound of whispering in the walls, but I couldn’t make out any words. Gradually, it stopped, and I closed my eyes, the lids dropping like the lids of two tiny coffins.

It wasn’t the first time I had had this nightmare, and I knew it wouldn’t be the last.

But this was the sort of nightmare that would shadow my days and turn every face that looked my way into a possible mask of deception.

I could trust no one, not even myself, for there was a part of me that hated what I had done and what I was about to do.

But a greater part of me refused to retreat.

Every time I glanced into the rearview mirror to see if we were being followed, Moses, the tractor-trailer driver who had agreed to give me a ride, grew more and more suspicious, his eyes widening, his long fingers moving nervously on the steering wheel as if he were playing a piano. I knew he was having this reaction to how I was behaving, but I couldn’t help looking back to see if they were pursuing me and wondering if, with their amazing senses and insights, they could find me anywhere, no matter how far and how fast I was traveling away from them. Maybe running away was just plain stupid and futile after all.

But I had no choice.

I had learned that all of us, all of my sisters, were in our family solely to bring someone to Daddy, someone upon whom he could feed. We were his fishers of men. That was our purpose while we lived with him. As the others had done, my older sister Ava was moving on to fulfill her own destiny, and so the responsibility to help Daddy now was falling to me. I had been nurtured and trained for this purpose, a purpose I think I had always
refused to recognize in myself and now was determined to reject.

Ava was always suspicious of me, even when I was much younger. Early on, she had sensed something about me that Daddy hadn’t or maybe didn’t want to admit, especially to her or any of my other sisters. I wondered if he had ever said anything about me to Mrs. Fennel, our nanny and housekeeper. I always felt she watched me more closely, scrutinized everything I did and said, and observed me more than she did any of my sisters with her suspicious narrowing eyes. Whatever it was about me that triggered this concern, I was sure Daddy believed I would overcome it. Never in his history had he been wrong about one of his daughters. Why should he be wrong about me, the daughter who seemed to be his favorite?

Surely there was something in me too powerful for me to deny or to overcome. I might not like who and what I was, but what difference could that make? To my father, I was like all of my sisters, all of his daughters, some meteor cast into space, unable to stop or change direction. My genetic destiny was just as inevitable. I wrestled nightly with these conflicting emotions. My moans and groans surely were overheard and raised more concern. We weren’t supposed to have nightmares or bad dreams. We weren’t supposed to agonize over questions like the ones that were born out of the womb of my all-too-human conscience.

Every question I asked, every note of hesitation in my voice or look of disapproval in my eyes, surely sounded more alarms. I could sense that they were all talking about
me even before my defiance and flight. The echoes that were born in our house didn’t die quick deaths. They lingered in the walls. They were the whispers I heard in the darkness, whispers that were like coiled wires attached to a time bomb that would soon explode.

“Lorelei will disappoint us.”

“Lorelei will endanger us all.”

“Lorelei is a mistake as real and as difficult to face as a deformed human baby.”

Eventually, I had to be put to the test. I was commanded to make the boy with whom I had fallen in love, Buddy Gilroy, my first prey, my initial gift to Daddy to prove my loyalty and to show, once and for all, that deep down I was no different from any of them. I wasn’t permitted to fall in love, anyway. None of us was. I had already gone too far, and to correct the situation, I was to deliver my love to my father, who would absorb him into his own darkness forever and ever. Daddy could wipe my mind clean of every passionate memory.

Refusal was not an option, and failure was fatal, for if I had a greater love than the love I had for my father, I was abhorrent to my sisters, my own kind, and a major disappointment to him. It could signal the end of his line, the crumbling of his crest, and the final howl of fulfillment on a moonlit night while everything around him slept in awe of his beauty and power. Silence would come crashing down like a curtain of iron and reduce us all to dust, which the envious and eager wind could scatter over the four corners of the world.

They had ordered me to bring Buddy to our house in California and serve him up on a silver platter of
betrayal, but in the end, I couldn’t do it. I told Buddy that my father was dangerous and was adamant about my not seeing him anymore. I tried to make him understand that there was no changing my father’s mind and that if Buddy didn’t leave me, I would be unable to protect him. I said everything I could to drive him away, but he loved me too much.

He was under the misapprehension that my father was probably some organized-crime boss. Little did he know how much I would rather that were so, would rather that were the reason I told him my father was too dangerous and we couldn’t stay together. I thought I had rescued him, but my sister Ava went behind my back and got him to come to the house. I saved him at the last moment, but he saw Daddy, saw what he was, so in the end, I had to violate one of our precious ten commandments. I had to tell him the truth about us, about who and what we were.

Even though he had seen Daddy in his most frightening form, he had trouble believing it. Daddy once said that, as with the devil, the best thing going for us was that most people thought we were a fantasy.

“They made the rules so ludicrous that it was always easy to hide our existence. They can’t see us in mirrors. We can’t be in the daylight. We cower at the sight of a cross. We flee from garlic. Please,” he said. “Let them keep it up. I’ll bite into garlic like an apple.”

At the time, I still believed I was an orphan, and Buddy insisted on coming along with me to visit the orphanage I had discovered in Oregon. I was hoping to find my real mother. By the time we arrived, my sisters
and Mrs. Fennel were already there, and the reality of who and what I was came clearly home to me. Rather than accept it, I fled and once again saved Buddy from a horrible fate.