Read Day of the Dragon Online

Day of the Dragon 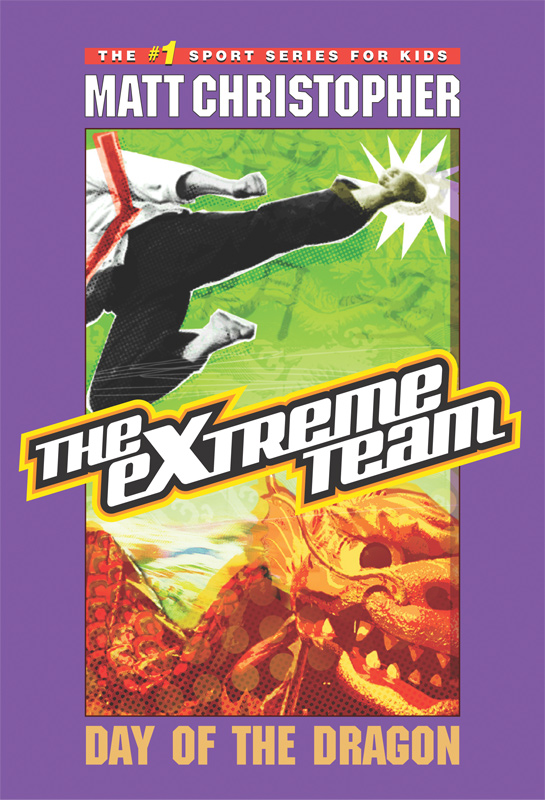 Matt Christopher
®
is a registered trademark of Catherine M. Christopher.

Is Kung Fu Right for You?

Mark Goldstein took off his glasses, wiped them clean, and put them back on again.
I’ll never be able to do this,
he thought. Alison Lee, the teenager who kept watch over the town skatepark, was demonstrating a skateboard move called the kickflip. Mark and his friends, Savannah Smith and Belicia “Bizz” Juarez, were about to try it for the first time.

“You guys can do ollies, right?” Alison asked. Mark and the girls nodded. “Well, the kickflip is like an ollie. Except when the board is in the air, it flips around, like a barrel rolling. Here, let me show you.”

She put her left foot on the board’s kicktail. Her right foot went between the front and back trucks. “With an ollie, your front foot is sideways. With the kickflip, it’s at an angle.” She turned her right foot. “Think of the board as a clock face. The nose is at twelve o’clock. Point your foot between ten and eleven.

“This next stuff happens fast,” she continued. “Stomp your back foot to make the board pop up, just like an ollie. At the same time, drag your front foot forward and off the side. Flick your toe just enough to make the board flip toward you. After the board flips all the way around, it falls to the ground and you land on it. Like this.”

One moment, she was standing on her board. The next, she was high in the air, legs tucked up and her board a blur of motion beneath her. Then the board landed on its wheels and she landed on the board.

Mark figured he’d have as good a chance of doing that move as flapping his arms and flying to the moon. He was about to say as much, but he didn’t get the chance.

“Absolutely!” Bizz grabbed her board. “I’m going to practice on the grass first. It won’t hurt so much when I fall.”

“Who said anything about falling?” Savannah picked up her board and carried it to a spot near Bizz. “Me, I plan to crash-land!”

“Do a couple of ollies first, to warm up,” Alison advised. The girls nodded.

Now, only Mark stood on the pavement, still undecided.

“C’mon, Mark, you’ll never know if you can do it unless you try!” Alison encouraged.

With a sigh, Mark put his board on a patch of grass. He placed his feet as Alison had shown him. But when he lifted his back foot for the stomp that would pop the board into the air, he lost his balance. Arms wheeling, he tumbled to the ground. He lay on the soft grass, staring up into the bright blue October sky. Then a shadowy figure blocked his view. “Well, you know what they say,” Mark replied. He took X’s hand and stood up. “Practice makes perfect.”

“You’ll have to practice more later, then,” X said. “I’m calling a meeting.”

Mark was more than happy to do as X asked. He could feel the beginning of a new bruise from the fall he’d taken.

“Huddle up here, guys,” X called. Mark, Savannah, and Bizz joined X and their two other friends, Jonas Malloy and Charlie Abbott, at a picnic table. Alison wandered over to see what was happening.

X reached into his backpack and pulled out a stack of bright orange papers. “It’s that time of year again,” he said solemnly. He handed a paper to each of them.

Mark read what was on the paper — and tried not to groan. “Uh, oh,” Alison said, reading over Mark’s shoulder. “I’m outta here.” She put her board down and skated away.

Halloween was X’s favorite holiday. Every year he came up with a crazy costume in the hopes of winning first prize in the town parade. The year before, he’d dressed all in orange and put a real, hollowed-out pumpkin on his head. “I’m a walkin’, talkin’ jack-o-lantern,” he’d said. “See the scary face I carved?”

Unfortunately, X’s costume was not a success. Even though the judges agreed it was the most original, they couldn’t award X first prize because he hadn’t worn the costume for the entire parade.

“The inside of a pumpkin doesn’t smell so good,” X had admitted later. “Plus, I kept bumping into people. At least I think they were people. Might have hit a telephone pole or two.”

Mark smiled at the memory. He couldn’t wait to hear what X had dreamed up for his costume this year. Then he looked at the paper again. “Hey, there’s a new category of costume this year,” he said. “‘Groups of three to six people may combine to form one costume.’ What does that mean?”

“That,” X said, rubbing his hands together, “means that this year, we’re all in this together. We’re going to come up with the biggest, best, most
outrageous
costume ever! So, any ideas?”

The other kids looked at one another. X sighed. “Okay, I’ll think up something. But you guys have to promise me you’ll all be in it. Deal?”

Mark wasn’t sure he wanted to promise to be part of a costume X had thought up. But he didn’t want to disappoint his friend, either. “I’m in,” he said. Everyone else agreed, too.

“Great!” said X happily. “Now, what were we doing before I called the meeting?”

“Let’s see,” Jonas said. “You, me, and Charlie were ridin’ the rails. Bizz and Savannah were mastering the kickflip. And I believe Mark was working on his kick-
flop
!” 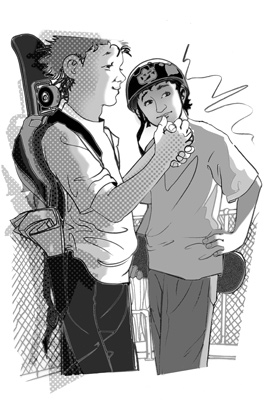 Mark laughed at Jonas’s joke with everyone else. But inside, he was a little embarrassed. It was hard knowing his friends thought he was a klutz.

But what can I do about it?
he asked himself.
There’s no miracle cure for clumsiness!

Mark left the skatepark soon after. He wanted to thank Alison for trying to teach him the kickflip. She’d taken off already, however.

Mark decided to cut through the Square on his way home. The Square was a wide brick street lined with little shops and restaurants. When the weather was good, vendors sold cool stuff from outdoor carts. No cars were allowed in the Square, so it was a great place to hang out. If it wasn’t too crowded, kids were allowed to skateboard there, too.

As Mark boarded through the Square, he heard someone call his name. It was Alison.

“I was just thinking about you,” she said. She pulled open the door to a large brick building. “Come here. I want to show you something.”

Mark joined her. “Is it okay for us to be in here?” he asked, walking into the building.

“Don’t worry,” she assured him. “My uncle runs this place.” She flicked on some lights.

Mark was standing in a huge room. The floor was wall-to-wall mats. Mirrors covered the front wall. Hanging on another wall were dangerous-looking weapons: long swords, spears, daggers, and short poles joined by chains.

“What is this place?” Mark whispered.

“It’s my uncle’s kung fu school,” Alison told him. “I thought you might be interested in seeing it. Maybe meet my uncle, too.”

Mark felt his face turn red. Before he could say anything, a deep voice interrupted.

Mark spun around. A muscular man came toward them. He smiled kindly at Mark.

“Uncle Eric, this is the kid I told you about,” Alison said. “Mark, this is my uncle, Eric Hale.”

“Call me Eric. As I was saying, I used to be clumsy, too. When I was twelve, I went through a growth spurt. I went from being five foot two to five foot six in less than a year! My arms and legs felt like they belonged to someone else. Then I found something that helped me.” He fixed a steady gaze on Mark. “Alison was thinking it might help you, too.”

“What?” Mark asked.
Maybe there was a miracle cure after all!
he thought.

“Kung fu?” Mark echoed doubtfully. “You mean, like the fighting you see on TV and in the movies and video games?” He turned to Alison. “You want me to learn how to fight? Why? So I can beat up the next person who makes fun of me?” 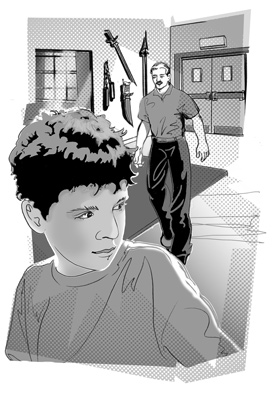 “Kung fu
does
teach you how to fight, but also to defend yourself,” Eric said. “And to do that, you have to practice many different moves. The more you practice the moves, the more you learn to control your body. In time, most people find that they can move with more grace and speed.”

“And that’s just one piece of the puzzle,” Eric added. “Kung fu is also about learning to believe in yourself. To trust that you’ll make the right decisions when faced with problems. Without that piece, kung fu is just another way to punch and kick and block.”

Orphan's Blade by Aubrie Dionne
Double Wedding: Sweet Historical Mail Order Brides of Lowell by MaryAnn Burnett
Taming His Scandalous Countess by Viola Morne
Music of the Heart by Harper Brooks
This Could Be Us But You Playin' 2 by Cachet
Hunting Memories by Hendee, Barb
Perdita by Joan Smith
Señor Vivo and the Coca Lord by Louis de Bernières
The Night at the Crossroads by Georges Simenon
13 Hours The Inside Account of What Really Happened In Benghazi by Mitchell Zuckoff