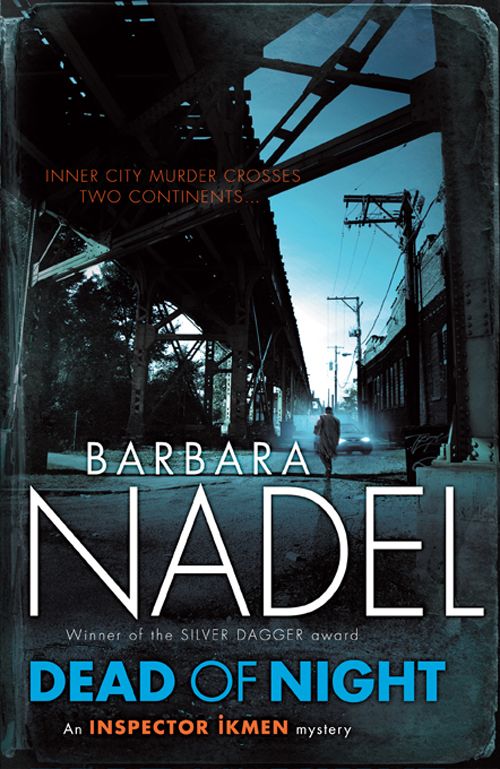 The right of Barbara Nadel to be identified as the Author of the Work has been asserted by her in accordance with the Copyright, Designs and Patents Act 1988.

First published as an Ebook by Headline Publishing Group in 2012

To the great city and great people of Detroit. Also for
Jim Reeve and his big, beautiful view of the Shard of Glass

His breath came in short, spiky gasps as his face was pushed hard into the unyielding brickwork in front of him. There was
a gun jammed against the side of his head. It was wielded by the same unknown person who had twisted his arm up his back so
that his hand nearly touched his head. He was afraid, but also angry. In spite of not being able to breathe properly, he yelled,
‘You fucking Purple motherfucker!’

But there was no reply, none of the usual murmurs of approval from the other gang members that generally accompanied hits
of this kind. Was there anyone else with whoever had grabbed him? He began to feel the blood drain from his face as he considered
the possibility that his assailant was alone. Apart from the shame he felt at being somehow disabled by possibly just one
person, he also knew what this could mean on another level. Every so often kids like him just got taken. Generally it was
by some sort of wacko freak who wanted to have sex with them – or with their body after they were dead. He’d seen that movie
The Hills Have Eyes
; he knew what went on.

‘Listen, man, I ain’t gonna let you have my butt!’ he said, and then instantly regretted it. His ma always said his mouth
was way too big for his head. The pressure on his arm and then from the gun against his temple increased. Either he’d hit
on the truth, or he’d just enraged his attacker still further. After all, if he wasn’t homosexual,
he had just insulted him. Then it got worse. ‘But if you gonna rob me, then that’s cool,’ he blurted. ‘Or . . . no, it ain’t cool,
but . . .’

But he didn’t want to be robbed either! Again, he panicked.

‘Not that I’m sayin’ you’re a faggot or nothing, man,’ he said. ‘Maybe you just want my stuff. I dunno!’ Then his voice rose
in terror and he yelled, ‘Just tell me what you do want, you crazy freak!’

There was snow on the ground underneath his feet. He looked down at it, knowing with a certainty that made his head dizzy
that his blood and brains were going to colour its city greyness red. He began to shiver. The gunman, his weapon pointed at
his head, pulled the muzzle back just ever so slightly. ‘Why are you going to kill me, man?’ the boy cried plaintively. ‘I
ain’t nothing special. What I ever do to you?’

But he never got an answer to that or any other question. His assailant pulled the trigger at just short of point-blank range,
and as the boy himself had imagined in the last moments of his life, his blood and brains turned the Detroit winter snow red.

Inspector Çetin İkmen’s office was cold. The police station heating system had developed a fault, and so everyone was having
to make do with tiny, weak electric heaters. Also İkmen was not actually in his office, which always made it, so his sergeant
Ayşe Farsakoğlu believed, even more dreary and cheerless.

She leaned towards the tiny one-bar heater and thought about how badly her week without her boss was starting. So far, since
İkmen and another inspector, Mehmet Süleyman, had left to go to a policing conference abroad, first the computer system had
thrown a tantrum, and then the heating had broken down. It was almost as if the fabric of the building was protesting at their
absence. Ayşe herself always felt lost without İkmen, and whenever Süleyman was out of town, she worried. Some years before,
she’d had a brief affair with the handsome, urbane Mehmet. She still, in spite of his so far two marriages as well as numerous
affairs and liaisons, had feelings for him. Where the two officers had gone, representing the entire Turkish police force,
was a very long way away, to a place apparently even colder than İstanbul. As she leaned still further in towards the fire,
Ayşe found such an idea almost beyond belief. Then a knock at the door made her look up. ‘Come in.’

The door opened to reveal a slightly overweight dark man in his late forties.

İzzet Melik was Mehmet Süleyman’s sergeant, and like Ayşe Farsakoğlu, he was not finding the absence of his boss or the bitterly
cold November wind easy to deal with. He was also, Ayşe noticed, carrying a paper bag that appeared to be steaming. He held
it up so that she could see it. ‘Börek,’ he said, announcing the presence of hot, savoury Turkish pastries. ‘If the heating’s
going to be down for a while, we need to eat properly and keep warm.’

Ayşe smiled. İzzet, in spite of his tough, macho-man exterior, was a kind and rather cultured soul who had held a romantic
torch for her, in silence, for years.

He took a tissue out of his pocket and then picked a triangular pastry out of the bag and wrapped it up for her. ‘Mind if
I join you, Sergeant Farsakoğlu?’

He was always so careful to be proper and respectful with her. As she looked at him, in spite of his heaviness and lack of
physical grace, Ayşe felt herself warm to him. Like her boss, Çetin İkmen, İzzet Melik was a ‘good’ man. What you saw was,
generally, what you got. No subterfuge, no hidden agendas, none of the fascinating mercurial scariness that could surface
in Mehmet Süleyman from time to time. She pointed to the battered chair behind İkmen’s desk and said, ‘Bring that over.’

He smiled. For a while they both sat in companionable silence, eating their börek, İzzet pulling his coat in tight around
his shoulders. Then Ayşe said, ‘So this conference our bosses have gone to . . .’

‘About?’ He shrugged. ‘I think it’s about gangs and drugs and migration and how those things, and other factors, affect life
in a modern city.’

Ayşe bit into a particularly cheesy bit of her börek and was amazed at just how much better it made her feel.

‘Officers are going from all over the world,’ İzzet continued. ‘But then changing urban environments affect us all. You know
this city. İstanbul, had only two million inhabitants back in 1978? We’re now twelve million, at least.’

‘Yes. And a lot of those problems are global now too,’ he said. ‘Kids from New York to Bangkok sniff gas, shove cocaine up
their noses and make up rap tunes about inner-city alienation. The internet allows terrorist groups to reach out to men and
women on the streets of cities everywhere. Everything’s expanding, complicating, getting faster.’ He frowned. ‘If we don’t
either take control of it, try to understand it or both, we could find ourselves in the middle of an urban nightmare, a real
futuristic dystopia.’

İzzet was way cleverer than he looked. Sometimes he was too clever. Ayşe knew what a dystopia was, but she never would have
used the word herself. She finished her börek and then wiped her fingers on the tissue. ‘Well, whatever comes out of it,’
she said, ‘Inspector İkmen and Inspector Süleyman are getting to go to America. Çetin Bey was a little nervous, you know.
Such a long flight!’