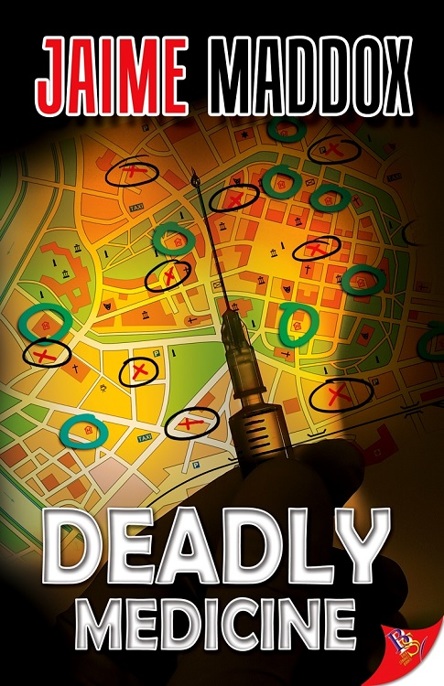 Dr. Ward Thrasher is hoping her ex-partner, Dr. Jess Benson, will reconsider their breakup, and so she takes a new job to be closer to her. But Jess makes it clear that she’s moved on and urges Ward to do the same. Helping to mend her heart is feisty new friend, senior citizen Frieda Henderfield, and the beautiful hospital CEO Abby Rosen.

Then Ward discovers fellow physician Edward Hawk has made a hobby of killing his patients, and she sets out to stop him. Before she can, Jess turns up missing, and Ward, Abby, and Frieda must save her from the psychopathic doctor. If Jess survives, will she rekindle the flame with Ward? Or has Ward’s heart already been stolen by Abby?

The ladies at Bold Strokes Books make my job as an author an easy one. Thank you to Rad, Sandy Lowe, Cindy Cresap, and Stacia Seaman for their hard work. Sheri created another great cover and I’m in awe of her talents. A special thanks to Toni Whitaker for ensuring that I receive my monthly sampling of new works from the many talented BSB authors. Finally, to my editor, Shelley Thrasher, who continues to teach me how to write with each edit we do.

My background in medicine helped with this book, but if it wasn’t for Carolyn’s cousin Bobby, I would know very little about fishing, whether on ice or on land. Thanks, BC, for all the fun times. Thanks also to my alpha readers, Margaret Pauling and Nancy McLain, for their feedback. I also must thank Nancy for her help in creating the character of Frieda. Nancy lived much of Frieda’s very exciting life, and I’m grateful to her for taking me back in time with her.

As always, everything I do is with the love and support of the three people who are helping to raise me: my beautiful partner, Carolyn, and our sons, Jamison and Max. Love you lots.

If I hit a home run, it’s because you helped me with my swing.

Edward Hawk sat perfectly erect in his chair, ignoring the pile of magazines on the table beside him and the woman at the desk before him. He reviewed the reasons he found himself in this waiting room, appropriately named, as he awaited his fate. His termination had obviously been decided, but the question that plagued him now was why.
Why?

Details, details. The devil lived there.

Why was he here? He asked himself again, then realized he could add a few other questions. Who? Where? When? What?

The question “Who?” could have seventeen answers. Seventeen names. Seventeen dead bodies—but which one had caused the bright light of suspicion to be cast onto his darkest secrets? Likely it was someone he’d recently encountered, but humans tended to trivialize details and rationalize unpleasantries, and it really could have been any one of them. Fuck! He had to find out. He needed to know what he’d done wrong, so he wouldn’t make the same mistake again. A person could change jobs only so many times before prospective new employers began to ask questions of their own.

Shifting his position, Edward stretched his legs out in front of him, admiring his Cole Haan loafers. He noted a smudge that required buffing. He refused to be seen looking anything less than perfect. His fastidious nature was just one reason bullies had targeted him at school. Not now, though. Now, he chose the targets.

Glancing casually at his Rolex, he noted that he’d been kept waiting for fifteen minutes. He had nowhere to go but that didn’t matter. His time was important, and his superior should show more respect.

Edward was worried, irritated, and annoyed at the wait, at the imperfection on his shoe, at the mistake he’d obviously made to land him in his boss’s office. He was trapped here, awaiting the inevitable. But was more than termination in store for him? He felt a flicker in his chest as his pulse pounded, and he willed his heart and his breathing to slow. In a minute, he felt better.

No one could prove anything, he told himself. They might suspect what he’d been doing, but not a shred of evidence existed that he’d done anything wrong. If there was, he’d be waiting to talk to the police instead of his boss. Edward knew—he’d been in this seat before.

Hospitals were too concerned with lawsuits to do anything more than quietly dismiss employees like him. If the hospital actively investigated the deaths of any of the patients who’d died under his care, a surviving family member might get wind of their concern and file a lawsuit. If the hospital harassed him in any way, he’d file one. Hospitals hate lawsuits—even ones they win—because they cost money and raise questions about competence and ethics and all other sorts of messy subjects. So, the people in charge would discreetly ask for his resignation and send him on his way, pretending nothing unusual had happened during his tenure.

That he might do something questionable somewhere else didn’t concern the people in power. They just wanted him gone.

Finding another job didn’t bother him; his personal assistant would handle it. Hospitals were always hiring, and he never had a bad recommendation, despite being asked to leave half a dozen places over a ten-year period.

The secretary’s voice was muted as she addressed him, as if she was in on the conspiracy to keep his dismissal quiet. “Dr. Fowler is ready for you.” Edward buttoned his cashmere blazer as he stood, then carefully swiped away nonexistent wrinkles in his pants as he walked toward the door to the ER director’s office and entered.

“Have a seat,” Sam Fowler said in a booming voice, and Edward did as instructed. The inner office contained no more color or character than the waiting area. Drab colors, institutional furniture, canned artwork. Blah, blah, blah. Only the Christmas cards, tacked with pins onto a cork message board, brought color to the room. Nothing like he’d decorate if his name were written on one of the most important doors in the building. Yet it suited the man, who wasn’t gifted with good looks or the ability to assemble a fashionable wardrobe. He was all business in the ER and took that same approach with Edward now.

“I’m sure you’re wondering why I asked you here. I’ll get straight to the point.” He barely lifted his eyes from the blotter on the desk before him. “We’re letting you go. Effective immediately. I’ve typed a letter of resignation for you. That way your dismissal won’t appear as a blemish on your resume. Your salary will be paid through the end of the schedule, which carries you to New Year’s Eve. I’ll take your ID badge. Do you have anything in your locker you need to remove?”

Edward wasn’t shocked that he was being terminated, but that Fowler offered no reason surprised him. That was typically the main focus of the parting speech, concerns about incidents and people talking and advice to watch himself. It was upsetting. He wanted—no, he needed to know what Sam Fowler knew—so he wouldn’t repeat his mistake. Was it the forty-year-old man having the heart attack or the teenage girl with diabetes? Or the little boy who’d been hit by a car? Had his method betrayed him, or had one particular coworker noticed something odd? Or, perhaps, had this just been too long a run? Maybe it wasn’t a single incident, but perhaps the accumulation of dead patients connected only by their association with him?