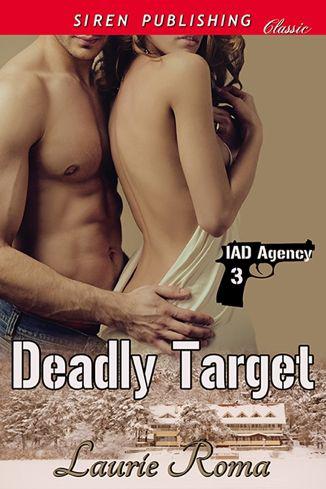 IAD agent Mikayla “Lynx” Lincoln is in desperate need of a vacation after taking a bullet during her last mission. On orders to relax and recover, she's sent to a cabin in the secluded woods of Colorado for some peace and quiet. But her plans for a restful recovery are shot to hell the moment she crosses paths with former movie star Gage Stark.

Gage Stark is a man with a troubled past. After a brutal betrayal ended his promising acting career, he returned home to heal and start a new life. The moment Gage meets Mikayla, their chemistry is too strong to deny. Passion explodes every time they're together, and their volatile relationship is anything but quiet.

When a shocking discovery is made and secrets are revealed, trust is put to the test. Will Gage be strong enough to stand beside Mikayla and fight, or will his need to protect her shatter the fragile bond between them?

If you have purchased this copy of
Deadly Target
by Laurie Roma from BookStrand.com or its official distributors, thank you. Also, thank you for not sharing your copy of this book.

This is Laurie Roma’s livelihood. It’s fair and simple. Please respect Ms. Roma’s right to earn a living from her work.

My childhood friend and sister of my heart. Thank you for always supporting and believing in me. You deserve a bigger and brighter happily ever after than I could ever put into words.

Thank you for being you…

The windshield wipers worked furiously back and forth against the window as Mikayla “Lynx” Lincoln rolled her eyes from the passenger seat of the large SUV. Not that the wipers helped against the relentless fall of swirling white mist outside the car window.

It’s not like it had been her idea to drive out in a storm. No, it had been the brainchild of the man currently sitting in the driver’s seat, but now was probably not a good time to mention that.

God save her from friends with good intentions.

Continuing to rant, Adrian Savage let out a stream of curses as the SUV skidded on the icy road. “I think all weathermen should be shot. Do you hear me? Shot! Light snow my ass! We are in the frickin’ arctic tundra and I can’t see a fucking thing!”

Mikayla glanced out the window into the blizzard that only hours ago had been forecasted as a light snowfall until the late hours of the night. Barely evening now, it seemed that the forecasters were indeed wrong again.

Mikayla’s own reflection shone back at her from the side window against the pure white backdrop outside. She was beautiful, even though she didn’t work at it. She kept her curly, dark hair short but fashionably styled, although most of the time she left it piled on the top of her head out of her way and off her face. She had a sprinkle of freckles across the bridge of her nose and on her cheeks, but instead of detracting from her beauty, the light markings only seemed to enhance it.

She knew the importance of presentation and she worked it well. She wore little makeup, but what she did wear accented her exotic features in a way that enhanced her natural beauty and olive skin tone. She was tall at five nine, but Mikayla’s most striking feature were her unusual violet eyes. Unique and beautiful, they could be used to pierce a man’s soul with one look. She had made herself a strong, independent woman who knew who she was and what she wanted.

Too bad her work took over every minute of her life…

Looking back down at the map in her hands Mikayla shoved her hair back off of her face, absently wishing that she had tied it up as she tried to see how much farther they had to go until they reached their destination. Signs, signs would be good.

Not that they could see anything anyways.

Stopping somewhere where they could ride out the storm was essential considering they were in bum-fuck Colorado, literally in the middle of nowhere. They had flown into Denver then rented a car to drive her out to the small, isolated town of Serenity where she needed to go. Ha, she wasn’t exactly feeling too serene right now. A little light snow didn’t seem like a good reason to put off the journey Adrian had said, against Mikayla’s protests. But now, well, now it was a completely different story.

To put it simply, they were screwed.

“Adrian, we need to get the hell out of this storm. I can’t see the signs or landmarks for the turnoff,” Mikayla said.

Hands tight on the wheel, Adrian shot a glare at the rearview mirror. “Rock! Wake up, you fucking asshole!”

Mikayla glanced over her shoulder to where Rock Savage was sleeping peacefully in the back seat of the SUV in ignorant bliss to what was going on outside. Rock and Adrian Savage were twins, identical except for their hair. Rock had his head shaved and Adrian has short dark-brown spikes, but both were now covered with skull caps to keep the cold out. The men’s personalities were like night and day. Rock was a quiet man and preferred to blend into the background, while Adrian was usually the more friendly of the two.

Adrian’s piercing green eyes were filled with barely contained rage as the car skidded on the icy road again. Once he gained control, Adrian took an empty bottle of water out of the cupholder and threw it in the back. Rock, being Rock, caught it on the fly without opening his eyes and yawned, stretching his long arms as far as he could in the confines of the car. Adrian let out another vicious curse as Rock kicked the driver’s seat hard from behind in retaliation.

Mikayla rolled her eyes before looking out the window again. She was trying to make out any landmarks that would help them figure out where in the hell they were as the men switched to a heated verbal battle that only brothers could manage without coming to physical blows. Not that they wouldn’t enjoy a physical brawl just as much.

The twins had taken an assignment in Denver dealing with some security issues, but they had planned to stay the night before making the trek back to the city. She knew they wanted to make sure she was settled in safe and sound in the cabin before they headed back. They would be busy working at Cryton Dynamics for the next month, but she had a feeling she would see them again before their assignment was complete.

Mikayla, Adrian and Rock all worked for a company that specialized in security. Mac Securities provided defense assistance and installed security systems in high-risk facilities around the world using the latest technology and military precision.

Mac Securities was the top in the field. Part of that was because their boss, Jason MacBain, only hired the best and brightest for his company. The other part was due to the fact that Mac Securities was also a front for IAD, a specialized intelligence agency and counter-terrorist task force that very few people even knew existed.

The International Alliance of Defense was an extremely covert branch in the intelligence community, more like a transnational agency, the ultimate warriors of global warfare with agents stationed all over the world. The members of NATO formed IAD, with a policy of “get it done, no matter the cost.” IAD handled their own problems and discourses internally, and that was just the way they liked it.

They were the elite and only the best were chosen to serve.

For the highly skilled select members of IAD it was a dream come true, since most of the agents had been disillusioned with the rules, regulations and red tape of the regular intelligence branches. Only the highest, most qualified candidates where chosen for IAD, given a kind of worldwide immunity for their actions.

Government agencies around the world looked at the members of IAD with awe and a great amount of envy. Not that it didn’t piss off other agencies when they had to defer to IAD agents if the situation called for it. IAD worked jointly with many other government agencies. It was easier for them to step in and finish the jobs that others couldn’t handle.

Mikayla had joined IAD straight out of the military. Unlike most of her colleagues, she was not a product of a tortured past. No, her nightmares came to her later on in life, a product of her chosen profession. She had simply been born an elite sniper with a natural talent for death. One of the few females in a male-dominated field, Mikayla Lincoln had made a name for herself, although very few people actually knew that the infamous sniper “Lynx” was a woman.

As Simple as Snow by Gregory Galloway
Renee Ryan by The Outlaw's Redemption
Pursuit of Justice by DiAnn Mills
Kade's Rescue (Detroit Heat Book 1) by Lynn, Davida
Necessary Lies by Diane Chamberlain
Faded Denim: Color Me Trapped by Melody Carlson
So Paddy Got Up - an Arsenal anthology by Andrew Mangan
A Life Less Ordinary by Bernadine, Victoria
Her Forbidden Rockstar: A Forbidden Rockers Novel by Robinson, Sarah
Making You Mine by Elizabeth Reyes