Read Death in the Time of Ice Online 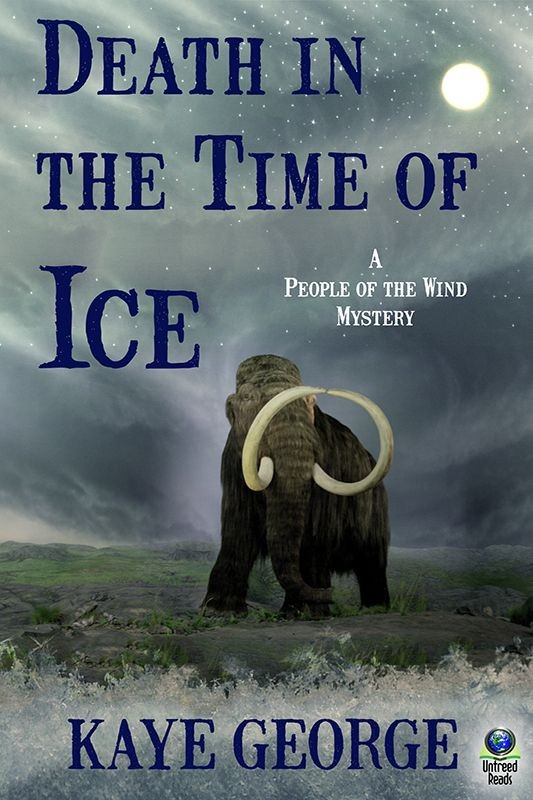 Through the many versions of this project, I had so much help from enthusiastic supporters. I count Kathy Waller and Gale Albright among the staunchest and most steadfast. Chris Roerden gave me early guidance. Others who gave invaluable assistance, critiques, and encouragement are Jim Jackson, Daryl Wood Gerber, Cathy Sonnenberg, Kathleen Marsh, Marilyn Levinson, Michelle Martin, Judy Copek, Sally Bartoo, Sharon Wildwind (whose name I unconsciously used for a character), Jean Henry Mead, Sarah Wisseman, and I’ll bet a whole lot more that I’m leaving out.

I’m so very grateful to the staff at Untreed Reads for believing in my vision and bringing it to light. The cover artist, Ginny Glass, did a terrific job. I can’t imagine a better cover. Thanks, to everyone at UR.

There has always been the wind.

Since our planet began to turn, there has been the wind. This ball of dirt and fire and water started to spin. The air stirred. And Earth’s time began.

But the beginnings of the wind are lost in the mists of time. The wind blew before the Appian Way wended through Rome. It blew before the Parthenon crowned Athens. Before pyramids sprang up in Egypt.

On current evidence, the Neanderthals lived between about 230,000 and 30,000 years ago—a huge span of time by any reckoning.

—
In Search of the Neanderthals,
Christopher Stringer and Clive Gamble, p. 7

The wind picked up speed over the surface of the ice. It blasted downward off the edge of the frozen field, past tangled masses of spruce and pine uprooted by the relentless, inevitable, insatiable progress of the ice mass. It soared over moraines deposited by the glaciers of the last Time of Great Ice.

A new Ice Age was coming. The wind blew change across the land, howled across a smooth plain crisscrossed by small streams, tore through the forest. It gathered strength, came to an open place, and whipped around a small band of about twenty-five hominids. They gathered around their community fire, singing and telling their history as they did most nights, in order that the young ones might learn it and the elders might not forget.

The song of the tribe lifted to Dakadaga, the Spirit of Mother Sky. The Spirit’s many eyes shone down on the tribe, some of her eyes twinkling, perhaps because they were about to fall across the sky in fast, bright streaks.

The wind swept past Enga Dancing Flower, sitting at the edge of the gathering. A gust riffled her long, coppery-colored hair and made her glad of the bearskin cape covering her back and shoulders. A low rumble came from her gut, the sound joining the whine of the wind. She had not gotten enough to eat for several days.

The fire, burning in the shelter of the huts, defended Enga and her tribe from the worst of the wind’s assault. But the seasons were turning, as she knew they always did, and the cold, dark one approached, no matter how well tended and warm the fire.

The song had been sung, the Saga had been told. Hama, the Most High Female and leader of the Hamapa tribe, stirred and all eyes turned toward her. Hama’s long, thick braid, gray with age, caught glints from the firelight and swung across her back as she stood.

“Hoody! Vav Hama.” Hama spoke aloud, entreating the Spirits so they would hear and heed her as she made a rare Official Pronouncement. “Listen! The Most High Female Speaks.”

She continued, her voice addressing the Spirits, as well as her tribe. “The Hamapa tribe cannot stay in this place. We must leave our home, our beautiful village. The great beasts are no longer here in great numbers. In the Seed Season we will move.”

Enga felt the stirrings of the brothers and sisters next to her.

A mental message, darkened for privacy, came to her from Ung Strong Arm, her twin sister. S
uch matters are usually discussed before they’re announced.

Yes
, Enga answered her, careful to hide her reply from the others.
This sounds like a serious matter, something new to me. Let me ask about it.

She sent an open thought, bathed in bright, public color, to her leader.
Has the tribe ever moved to a new place before?

Hama answered,
Not in the memory of anyone living.

Nanno Green Eyes shot out a thought.
The Hamapa have lived in this village for generations.
Enga caught a vibrant wave of panic from Nanno and the muscles of her own stomach clenched.

Hama looked around for dissent. When no one offered opposition, she finished speaking aloud. “Mother Spirit of the Sky, Dakadaga, bless the Hamapa.” The leader then crouched on the stone between the other two Elders, facing the rest of them.

What will it be like to move a village?
wondered Enga to Ung.
I cannot visualize it.

Ung pondered for a moment. She sat across the circle from Enga, but that was no impediment to their intimate thought-conversation.
It is true, we have not killed much game recently. And we are all hungry.

Enga shook off her shock from the unprecedented proclamation, realizing nothing had been said about the immediate future, about the next day. She jumped up and thought-spoke to all.
What about the hunt? Will we hold the hunt?

Hama likewise broadcast her answer to the whole tribe.
Yes, at new sun as planned. And may all the Spirits bless the hunt so we will have enough food for the coming Dark Season.

An opinion came from the Storyteller, an old, bald male named Panan One Eye.
If we move our village, now, to follow after the herds—

We will not move our village yet,
Hama answered
. The tribe will remain here until Dark Season is over.

I can see that moving during Dark Season would not be wise.
Panan tilted his head skyward and closed his eyes to look inward, into the distant past, where the lore of the tribe resided.
Our Sagas tell of the tribe relocating long, long ago,
he thought-spoke
.

The other Elder chimed in.
But we have dwelt here for many ages. Our village, built by the Ancient Ones, is such a fine one. Could we build another village as fine as this?

Enga had been wondering the same thing, privately, where no one could read her doubts.

Yes,
agreed Hama,
the Ancient Ones built well.
She ran her hand over one of the flat stones that had been fitted together so carefully to make the Paved Place, tiny gravel filling the spaces between the stones.
We can build another village. It was done by them and can be done by us. We are the Most High People.

Enga felt the Elders did not look convinced.

But first we have to survive the Dark Season,
Hama continued
. It is almost here. And we need more meat. Much more meat.

If we have enough meat, there will be no need to move the village
, Panan suggested.

Hama skewered him with her look.
Panan One Eye, there will not be more game in the coming seasons than there has been in the recent ones. We will move when warm weather returns.

Hama rose again, rattled her hollow gourd, and called for the dance to begin.

Enga watched the dancers in the blaze of firelight and waited for a signal from Hama to join in. Chill evening air brushed her bare arms as she shivered and drew her cape closer.

She kept one eye on Hama, their elected leader, who also watched the dancers whirl around the leaping fire. As the tallest female in the tribe, Hama could easily watch over everyone and keep order.

Because of her position, she used moonless midnight hues to shield most of her thoughts from the others. The tribe depended so much on her, to lead them with strength and wisdom.

She answered him with a fond look.

I am happy you and Ung Strong Arm will hunt tomorrow. I will enjoy watching you
, Tog continued
.

Hamapa scouts had recently spotted a large herd of mammoth at a nearby watering spot. Hama was too old now to wield a spear, but Enga and the other young, sturdy females could bring down the mammoth. They knew they must bring home a large one tomorrow, an adult. It had been many suns since their bellies had been full.

To point the weapons out to the Spirits for their blessings, Hama shook her gourd toward the tools of the hunt, stone-tipped spears and flint knives, laid out around the fire burning in the center of the Paved Place.

The dancers moved with the solemn beat of the hollow log in a slow circle around the fire. Sannum Straight Hair, the drummer, maintained the rhythm, steady and stately. Soon, Hama bobbed her head at him and he quickened the beat. This dance had to catch the attention of the Spirits.

We are depending on you, Enga Dancing Flower,
thought-spoke Hama.
Prepare yourself to dance soon to Dakadaga, the Most High Spirit.

Enga tingled with eagerness to do what she did best, to dance for the success of the hunt. She stood and bounced on the balls of her feet, waiting impatiently to be called into the circle.

A sudden disturbance erupted between two adolescent males. Enga and the others perceived angry thought waves. She turned her gaze to Kung, a strong, strapping youth, who was standing over little Jeek, threat written in his dark glower.

Kung failed to funnel his thought-speak to Jeek and it radiated out to the others.
No female would prefer you, puny Jeek, to me, big Kung.

Do not throw those thoughts at me!

I will show you. Gunda would rather be with me.

Jeek scowled and shook his small fist in response, but kept further retorts in check.

Enga thought Kung was developing a swagger that needed to be squelched, but Jeek was not the one who should do it.

Kung’s birth mother had died as he was being born. He had been nursed and babied by all the females, but had resisted attaching to anyone. Enga heard he had been a hard baby to cuddle. Very squirmy. It was no wonder his adolescence was proving to be difficult.