Death on the Installment Plan 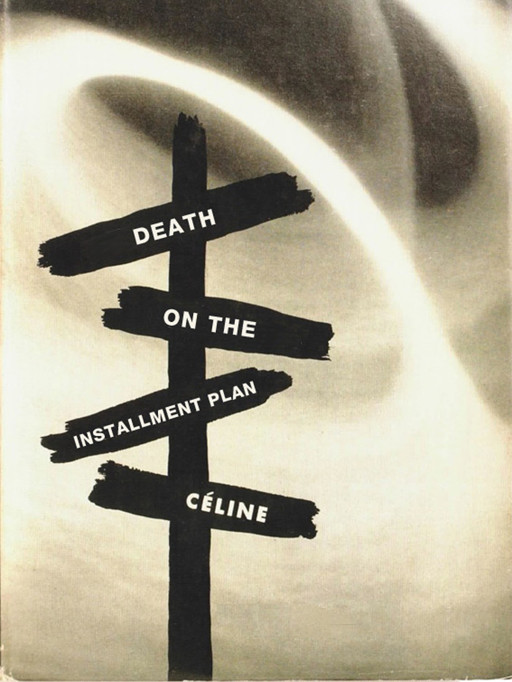 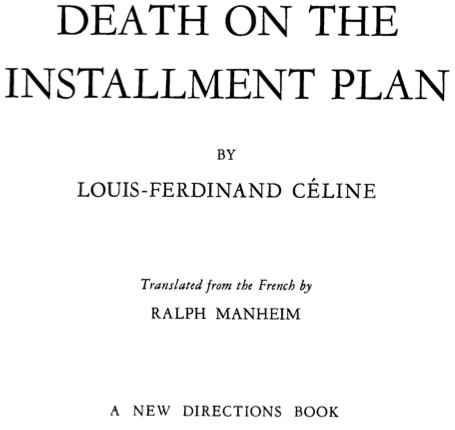 Copyright 1952 by Librairie Gallimard
Translation copyright © 1966 by Ralph Manheim
Library of Congress Catalog Card Number: 66-18692
ISBN: 0-8112-0017-5
All rights reserved. Except for brief passages quoted in
a newspaper, magazine, radio, or television review, no
part of this book may be reproduced in any form or
by any means, electronic or mechanical, including
photocopying and recording, or by any information
storage and retrieval system, without permission in
writing from the Publisher.
First published as ND Paperbook 330 in 1971
Published simultaneously in Canada by
Penguin Books Canada Limited
Manufactured in the United States of America
New Directions Books are printed on acid-free paper
New Directions Books are published for James Laughlin
by New Directions Publishing Corporation,
80 Eighth Avenue, New York 10011
SEVENTEENTH PRINTING

In an article on
Journey to the End of the Night
, Celine’s first novel, a French critic—Robert Faurisson— puts forward a humanistic definition of great literature: It “should appeal not only to man’s heart, intelligence, love of truth, but to the whole man; however pessimistic, it should help him to acquire an acceptance of life. A work excellent in other respects but inculcating a disgust with life is not great literature.” Faurisson goes on to ask how it comes about that for all its horror, bitterness, hatred, and general blackness
Journey to the End of the Night
is still, thirty years after its original publication, widely regarded as one of this century’s greatest novels. The question applies equally to Celine’s second novel,
Death on the Installment Plan
.

The intense blackness in Celine’s work converges from several sources. As a physician Dr. Destouches (his mother’s first name was Louise-Céline, hence the pseudonym) was obsessed by death and human suffering. A wound received in the First World War left him with insomnia, headaches, and a continual roaring in his ears. His childhood in the world of small Paris shopkeepers may have been less sordid than the picture painted in
Death on the Installment Plan
: unlike Ferdinand, he was a studious child with an aim in life—his medical vocation came to him at an early age; a friend from his medical-school days goes so far as to say that his parents lived in perfect harmony; and a number of Celine’s own utterances show that he felt a good deal more affection for his parents than one would gather from
Death on the Installment Plan
. Be that as it may, he was profoundly affected by the mentality of the
petits bourgeois
and
lumpenproletariat
among whom he grew up, by their cynicism, their deep distrust of their fellowmen, their persecution mania. On leaving elementary school he began to earn his living at odd jobs, and his experience of “business” and bosses in the “good old days” before the First World War never left him. He often came back to it in letters and interviews. In
Death on the Installment Plan
he writes: “If you haven’t been through that you’ll never know what obsessive hatred really smells like … the hatred that goes through your guts, all the way to your heart.” And “my main pleasure in life is being quicker than the boss when it comes to getting fired … I can see that kidney punch coming … Bosses are all stinkers, all they think about is giving you the gate …” And he generalized his experience; he saw no reason to suppose that anyone would be better than the people he had known. On the point of setting out for England, he wonders “if the English weren’t going to be meaner and crummier, a damn sight worse than the people around here.”

The blackness is further intensified by his literary attitudes and by the literary personality he composed for himself. He believed that literature had sidestepped man’s baseness as he knew it, that writers had resolutely embellished man, that his experience was the truth, which it was his mission to tell. His purpose in writing, he once said, was to blacken himself and others; we should all be freer if the whole truth about human “crumminess” were finally told.

He succeeded quite well in his mission and yet—to go back to Faurisson—he does not, at least in his early books and specifically in
Death on the Installment Plan
, disgust us with life. Far from it. Perhaps, indeed, we do feel freer.

Even in Celine’s explicit statements there are certain exceptions to his overall view of humanity: he makes no secret of his tenderness toward children and whores as well as animals. But although this might suffice to redeem Céline the sinner, it would hardly lead us either to accept life or to accept Céline as a great writer.

The explanation seems obvious today: the vision set forth in the first novels is not such as to destroy the world under our feet. This was much less evident in the thirties, when the books first appeared. At that time many readers and critics, even among those whose opinion was generally favorable, were too shocked by the nightmare, by Celine’s directness of expression and his revolution in style, to notice anything else. Since then, however, a great deal has happened—both in history and literature. We are no longer shocked; we can see more clearly. And there is hardly a page of
Death on the Installment Plan
that does not reveal Celine’s deep attachment not only to the world— to places, colors, clothes, furniture, boats and barges, lights in the distance—but to people as well. “A man’s real mistress,” he had said in
Journey to the End of the Night
, “is life.” His feeling for his mistress is expressed with the utmost diffidence and suspicion. He distrusts her as Ferdinand distrusts Nora in the second book. He vilifies and derides her. She is futile, a brief quiver in anticipation of death, insidious in her blandishments, always on the lookout for new ways to take us in. But he is always awake to her beauties, and the vigor of the disgust or derision with which he reacts to her ugliness only underscores his passion.

This seems a rather tall order, but here is an example from Death on the Installment Plan. A cluster of suburban villas in the early morning: “All kinds … rocky, flattened, arrogant, bandy-legged … pale, half-finished ones, skinny, emaciated … staggering … reeling on their frames … A massacre in yellow, brick-red, and semi-piss color … Not a one that can stand up right … A collection of toys plunked down in the shit!”

One critic calls Celine’s world a river of muck with a luminous surface. True, the grime and the glow are both present, but especially in Death on the Installment Plan, one is inclined to ask, Which is the body of the stream and which the surface?

For all his insistence on truth Céline was not a realist. André Gide once said that he wrote not of reality but of the hallucinations provoked by reality. Céline himself spoke of transposition “to the plane of delirium,” of a method of capturing emotions, not objects. He never describes, never relates “objectively” what happened. Things and events become inseparable from the emotions they arouse—hate, disgust, suspicion, wonderment, naïve enthusiasm, tenderness, nostalgia, even love—and laughter, a great deal of laughter, intermingled with everything else, enhancing, tempering, or calling into question. Céline spoke of his manner as “comic lyricism,” and this lyrical attitude toward fact is characteristic of him. Once when questioned about the details of his early life, he said: “That’s of no importance. Anyway you can find it all in Journey and in Death on the Installment Plan.” But in
Journey
Bardamu-Céline makes the trip from Africa to New York in chains, aboard a galley! In
Death on the Installment Plan
, to cite only one example, Ferdinand refuses with striking success to learn English during his stay in England, whereas young Destouches, who also spent some months in England, learned the language very well. Almost all Celine’s books are, in form at least, “autobiographical”; his biography remains obscure except for the barest framework.

In the opening pages of
Death on the Installment Plan
Céline states his intentions by introducing the narrator, the “I,” who will be telling the story of Ferdinand’s childhood and early adolescence. This “I” appears to be Celine’s literary personality or pose, a prolongation of the Bardamu of
Journey to the End of the Night
. He is gloomy, downtrodden, disabused, a doctor but also a poet, a latter-day François Villon. Unlike Dr. Destouches, who by all accounts was devoted to medicine and his patients, the narrator looks on medicine as a fascinating nightmare at best, and regards his patients as “pests.” Ferdinand is this man as a child—though one wonders in view of his recalcitrance and bewilderment how he ever got through medical school.

A head wound incurred in the war has left the narrator with a tendency to delirium, reflected in such hallucinations as the orgiastic stampede from the Bois to the Place de la Concorde and the sea voyage over the rooftops of Paris. Further on, Ferdinand has similar delirious visions, so similar that one wonders whose delirium it is—whether it is brought on by Ferdinand’s fever or by the narrator’s wound. But the narrator’s delirium is programmatic; its function goes far beyond Ferdinand’s explicit fevers. It is a manifesto for Celine’s “comic lyricism,” his method of transposing “to the plane of delirium.”

The narrator is a storyteller. He entertains Madame Vitruve and her niece Mireille with his stories, and he is at work on a book.
The Legend of King Krogold
, a mock medieval romance. It too, with its delirious pageantry, its lyricism, its mixture of persiflage and monumental horror, is a statement of the author’s intention. The narrator— and the boy Ferdinand, who inherits the
Legend
from his adult self—escapes into it from the meanness and boredom of daily life. In Céline, however, legend is far more than an escape; it engulfs all life, the daily as well as the exceptional. “There is no softness or gentleness in this world,” says Death to Prince Gwendor. “All kingdoms end in a dream.”

Another programmatic trait in the narrator is his persecution mania. He suspects all manner of plots against him at home, in the neighborhood, at the clinic where he works. Ferdinand in turn is a victim. If we take his story of his childhood—it is “his” story because by a magical effect of style the narrator
becomes
Ferdinand—at its face value, he never did anything wrong. Others, the crumminess of people, are responsible for all his troubles. Yet he feels guilty. He knows—though he never stops projecting his guilt outward—that his laziness and mulishness have something to do with it. He makes fun of his father, who blames everything on the Jews, the Freemasons, and the Japanese, but his own outlook, the suspicion and distrust that make him so unyielding, is not very different.

Death on the Installment Plan
—this lyrical autobiography in which impressions and emotions overshadow fact and in which the distortions of memory, far from being corrected, are jealously preserved, witness the mounds of artichokes in the food shops of Rochester, England—is the story of a boy who grew up with this century of progress. Department stores, motorcars, and airplanes are coming in. Fine craftsmanship, small shops, and spherical balloons are going out. The boy is avid for freedom, a notion there is very little place for in his home or in the shops where he tries to earn his keep. His struggle with his parents and his bosses ends in disaster. He is temporarily saved by his encounter with a different kind of boss—a bohemian, an editor, a universal inventor—who opens up the heavens and the secrets of science to him, though in his character and way of life he is no better than anybody else. But progress is inexorable; forces real and occult carry the universal genius to his doom.